Mariah’s brother/ nephew Shawn was in town this week and knowing he’s more a Nobu brother than a Nando’s one we went somewhere suitably expensive where you pay as much for the ambience as the food before I took him down to Bungalow 8 nightclub in St Martins Lane hotel where my friend John Woolf (Wiley’s former manager and man about town) was throwing his regular bash. We were ushered down into the intimate bar where the petite but much acclaimed female DJ Kaper was playing old skool hip-hop. In one corner was singer Hinda Hicks who has new music coming out soon, in another was producer Shy FX who was accompanied by his new American artist a very young, blonde lady and urban magician Dynamo for once was hanging out and socialising instead of taking everyone’s attention with his mind blowing magic, but I was most enraptured with one half of super production duo Chase & Status who ended up taking over the decks and throwing down some hardcore ragga! Braap!

It was a week of fabulous dinners as next one time ChoiceFM DJ, now football and business guru Chris Nathaniel invited me to dinner at celebrity loved Knightsbridge restaurant Mr Chows. We were accompanied by female vocal duo addictive. Chris and I had business to discuss so met a little ahead of the rest of the group. When addictive walked in the whole restaurant went quiet, stopped eating with forks suspended in mid-air and stared open mouthed at bthe 2 glamorous ladies that had just walked in. it was a hilarious sight to observe as they were clearly trying to work out if it was Destinys Child or The Saturdays LOL!. I ordered my (and Mariahs) favourite-the squab with iceberg lettuce. After convincing the addictive ladies it wasn’t pigeon but diced chicken –they joined me in wrapping up the little parcels of heaven and devouring. We finished with black cod-which is better in Nobu and gossiped about all things fabulous. For a while now the UK charts have been dominated by male British urban acts and so its nice to see a lot of the ladies breaking through again.

Next BET invited a VIP group of 100 guests to meet controversial radio host/ TV talk show presenter Wendy Williams-as my one time child hood heroine I had to go-more on that next week!.

I ended my week with a cup of tea with Mz Bratt. With her single ‘’Selector’’ blaring out from every radio station and car stereo, Selector looks to be one of this summers anthems and Mz Bratt is the name on everyone’s lips right about now. There’s talk of her locking down a major record deal with Atlantic.
She revealed that her single which will be released in September, will be put out via the aforementioned Shy FX’s record label (keeping the money and talent all in the UK family-nice one!).
Listening to ‘’Selector’’ its hard not to smile at the very hard, Buju toned lyrics coming from this very slight, delicate, pretty young girl that looks like she could play the Disney princess in every story.
The track is very wild when Bratts music in the past in comparison is very reserved. More recently Bratt has become part of a very forceful music clique called the ‘’A list crew’’- headed up by the legend that is Wiley. Bratt confessed that the first she had heard about her inclusion in the group was when she was on holiday in Egypt. She kept seeing Tweets saying ‘’Bratts in the A List’’. The tweets continued ‘’Wiley wants you to be in the a list collective’’. Bratt added ‘’He said “let’s do this and I had known him since I was a little girl so his Co sign is a big deal’’.
Other members of Wileys ‘’A List’’ include singer Shola Ama and her sister Sadie, artist J2K, Brazen/, and lots of other new members.
Bratt confided that Wiley regularly calls the collective together to work on music in the studio altogether where he has them all working together and experimenting like the
Andy Warhol of the grime scene putting together acts and experimenting.
I had to confess to Bratt that whilst I loved wiley and what he had achieved ,he had frustrated me a lot in the past by not turning up for media promotion opportunities and so on.
Bratt smiled knowingly and reassured me ‘’Lately he’s been more reliable. He’s realised with acts like Chipmunk and Tinchy Stryder he knows its a new day and its motivated him’’.

Bratt revealed that the Album coming from the group “Midnight Love” is out now and compared her clique to a British version of American collective ‘’Young Money’’.
Bratt has recently collaborated with film director Noel Clarke on music for his movie 4321 after the musical score director Bashy reached out to her and now 3 of her tracks are in the film.
Similarly Bashy had Bratt work on a track for the movie shank too-isn’t it great to see team- UK working together united in a way that’s never been seen before!?.

Bratts story is one of struggle and tenacity. Her early beginnings were in Ilford. Essex East London. She recalls growing up with her Dad who was into acid house. She recounts the stories of squatting. They were poor. Her middle class mum brought her up. She reminisces ‘’I Had a hard upbringing –the squatting was the worst. There was a lot of Domestic violence. I remember a lot of House parties. My Sister and I sat on the stairs. Superstar Seal used to squat with dad before he was famous. I remember being 14 years old at school listening to Dizzee on the radio. I used to hang with the guys. I met Terror Danja and he supported me quite a lot’’.
Currently Bratts midway through working on her album with All Saints old producer K Gee. I imagine being a pretty female in the game isn’t easy and Bratt agrees and confirms that ‘’People feel they can talk to me in a certain way or take advantage of me and of course there are the inevitable rumours about being with acts that you’re working with but I take it on the chin and keep it moving’’. Bratt adds that she’s always having emotional rants on twitter but loves it and is slightly addicted. Her favourite tweeter is fellow artist Giggs who has her laughing all day.
Bratt is a talent to look out for. Like a very young Ms Dynamite she’s gorgeous, talented and making music in a mans world- its time for the ladies to takeover again!. 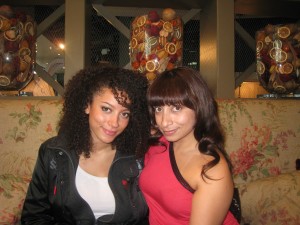