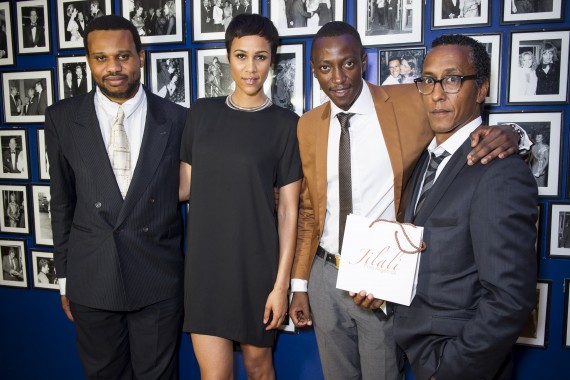 Over 1000 people attended the BUFF FILM festival, (sponsored by Jilali Argan Oil UK) over 4 days at Channel 4, Odeon West End, Oxford House (Bethnal Green) and Genesis Cinema. Actress Zawe Ashton (‘Fresh Meat’ & ‘Dreams of a Life’) hosted the opening night gala in Leicester Square, which was also attended by actor Andre Royo (Bubbles from HBO’s ‘The Wire’) for the UK premiere of ‘Calloused Hands’ in which he stars and co-produced. Actress Anjela Lauren Smith (‘Babymother’) hosted the closing night UK premiere of ‘Bloody Lip’ – an award-winning mockumentary about boxing, from the Genesis Cinema in Whitechapel. Also in attendance during the festival was Cass Pennant (on whom the movie ‘Cass’ was based on), actor Nicholas Pinnock (Top Boy) and David Essex (musician and actor) whose movie ‘Traveller’ received its’ world premiere at BUFF in Whitechapel starring his son Billy Cook, Lois Winstone & Jason Maza. The festival is now in its 8th year and is currently in discussions with Channel 4 about a broadcast partnership in relation to its’ selection of short films from this year’s event.
I particularly enjoyed the film The Fade, about men’s barbers across the world by documentary filmmaker, Andy Mundy-Castle. A doc about the culture of the barbershop, the male relationships forged via the intimacy of male hair care, the artistry it forges (not just on the scalps of the customers, but with the ambitions of the barbers too). Uniquely, Andy structured the doc to trace the route of the Transatlantic slave trade, so it features singular stories (with their narratives inter-cut) of barbers in Ghana, Jamaica, America and the UK. I loved that it included musicians among the clientele – Aidona, Elephant Man, Pharrell, Jay Sean, DJ Envy and Joe Budden. All give testimony about their relationships w/ their barbers, the importance (and competitive nature of male grooming) esp within the music industry. 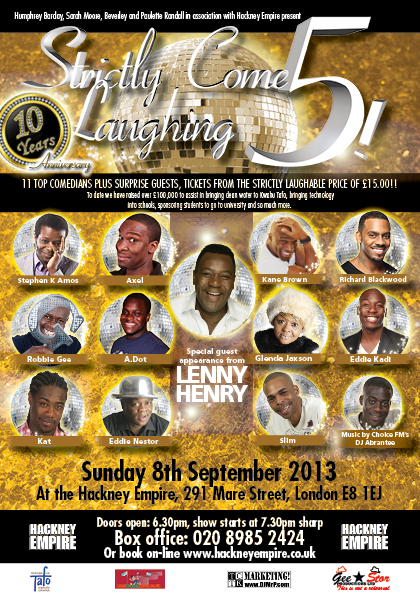 Comedy nights at Hackney Empire are in my heart, blood and funny bone! I’ve been attending them regularly for the past 2 decades! It’s a brilliantly consistent venue for urban comedy, and does well by engaging the local community, as well as a multi-cultured audience from far and wide. Last Sunday was one such event with a twist. A regular evening full of great urban comedians but in aid of a Ghanaian village which the strictly come laughing brand have been supporting for 10 years now!
The evening was like a BBC Red Nose Day show, hosted by the elder statesmen of comedy (they wont like me saying that!), Eddie Nestor & Robbie Gee, with comedians Slim, Axel, Glenda Jaxson, Richard Blackwood, A Dot, Kane Brown, Kat, Stephen K Amos and dame Baptiste. We also had musical performances by gospel Jermain Jackman, onstage set accompaniment music from DJ Abrantee, and a special guest appearance from Lenny Henry.
I’ve watched many of these acts come up, and their development and stage confidence has grown leap and bounds. Even the younger acts content is now very distinct, and they are laying their own style and flava ground. I recall when Kane Brown first hit the scene; he was a nervous stilted comic, now he’s on fire! This 39 old comic had us roaring at his old skool vs new skool jokes where he compared crisps brands like Pringles vs Golden Wonder and cars with chokes! Former CHOICEFM and MTVBASE host Kat played a black Puck character in his green tights and red codpiece adding a pantomime silent clown character to the night.

Eastenders legend Rudolf Walker, talked about the Ghananian charity Friends of Tafo, which is a charity that aims to empower as well as help the people of Kwahu-Tafo, an impoverished rural town in Ghana, via responsible giving that generates a capacity for self-development in education, job-creation, and quality of life and infrastructure.
They work in close partnership with the community of Kwahu-Tafo to ensure that the projects chosen and the resources allocated reflect local needs and priorities.
Friends of Tafo was founded in 2001 by the friends and family of TV Producer Humphrey Barclay, after his installation as Nkosuohene (Development Chief) in the ancestral home town of his friend, the late Ghanaian actor Gyearbuor Asante, who played the African eternal student ‘Matthew’ in the Channel 4 TV sitcom Desmond’s. Humphrey spends three periods of up to two months each in Tafo every year, working with the Progress Council and documenting progress.
Humphrey along with his co-producers Beverley & Paulette Randall and Sarah Moore of GeeStor Productions have produced Strictly Come Laughing! (Formerly THe Empire Strikes Black) for the past 10 years and have to date raised over £100,000 for Friends Of Tafo.

Next, comedy Newcomer south London’s Dame Baptiste sounded nervous for about 2 seconds, before getting into his groove and killing it, with his very new original style and content.
Comic Quincy is a big guy and bounded onstage with his longer than long locks. He had us roaring as he acknowledged that singer Jamelia had been stating publicly, that there should be more black faces on UK TV, and here she was, on a show called ‘’I love my country’’. He then extoled the power of Levi Roots brand now that there were Reggae Reggae crisps. He said ‘’we all know he just mixed ketchup and pepper to make his sauce and now he even has a crisp line’’ We were rolling!
I bought a few raffle tickets, as the prizes were great! Amongst the things I could’ve won were tickets to the royal variety performance and x factor, but what I wanted were the Eurostar and 3 nights in Paris. I didn’t win, but Strictly Come Laughing did make a grand total of £ on the night. Great example of arts making the world a better place. 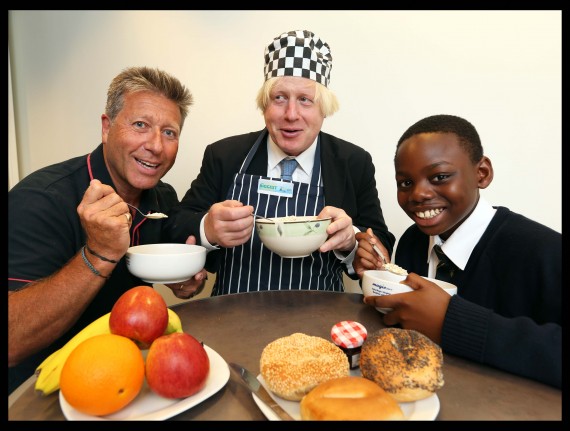 I ended the week with a 7am breakfast at City Hall where Magic 105.4 and The Mayor’s Fund for London, were broadcasting live in aid of London’s Biggest Breakfast. Their aim was to raise awareness to expand the Breakfast Club project and feed thousands more school children across the City. 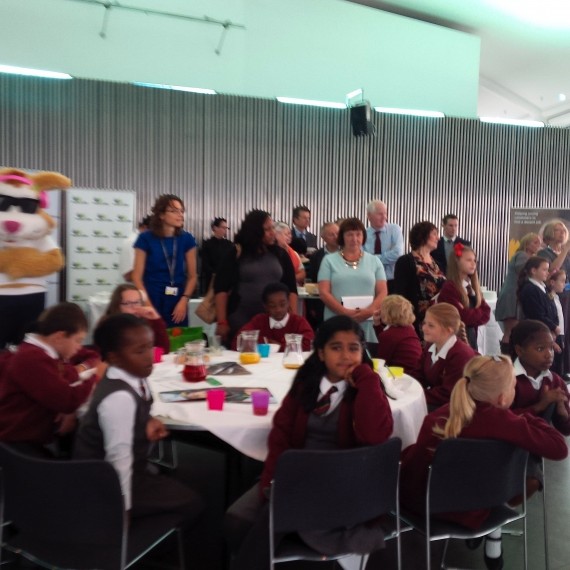 Many children come to school too hungry to learn. Currently 1 in 4 school children only have one healthy meal a day (school lunch) and 32% regularly miss out on breakfast.
It’s a campaign that has seen Magic FM and the Mayors Fund come together to deliver 10,000 daily breakfasts to 50 primary schools across seven of London’s most deprived boroughs, feeding nearly 2000 children each morning! One headmistress at the event told me that families are so poor nowadays, that often the parents join their children, for this daily essential at her school.
Transmitting live for the first time from the rooftop-London’s living room- were Magicfm DJ Neil fox. Joining Neil to perform live with his band was Westlife’s Shane who did a great job entertaining the 50 young school children from a nearby school. 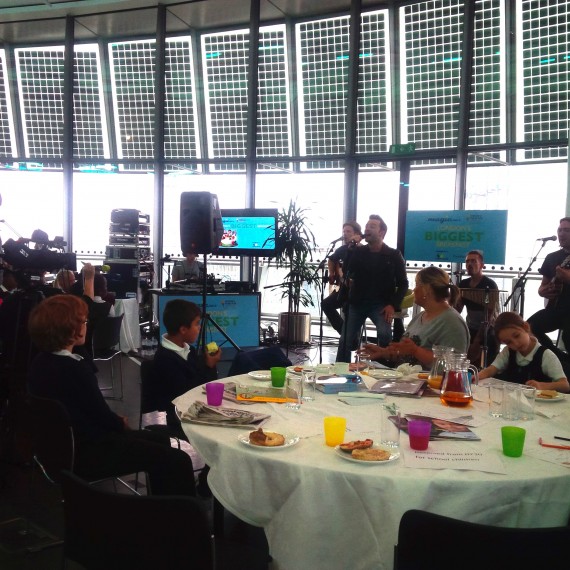 Also in the house was TV Chef and London restaurateur Cyrus Todiwala– the very cool ‘’spice man’’, who told me he likes to cook a spicy breakfast like a chili omlette and had us taste one made by Barnet school boy – junior master chef finalist- 12 year old TJ Dobson. TJ’s mum told me it was his grandma that encouraged his passion for cooking at a young age when she allowed him and only him from their family to watch her make her secret BBQ sauce. TJ told me he loves making BBQ chicken with blue sauce and crème brulee! 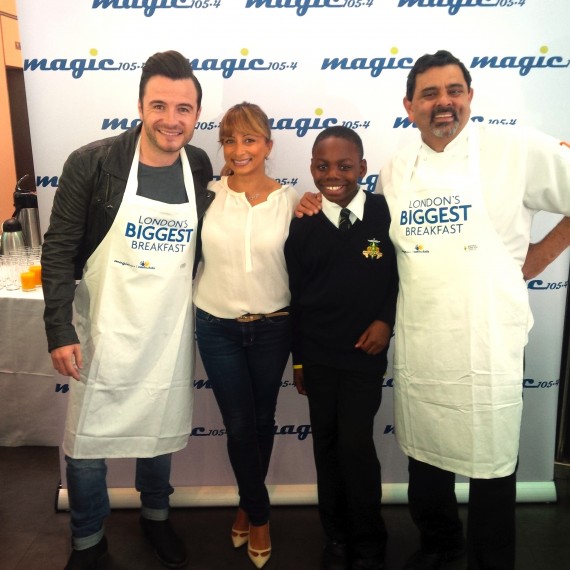 T J told me “I know that I and my twin sisters would find it really hard to concentrate at school if we didn’t have breakfast in the morning. All we’d hear is our tummies rumbling! I’m excited about giving the Mayor some good cooking tips too.” 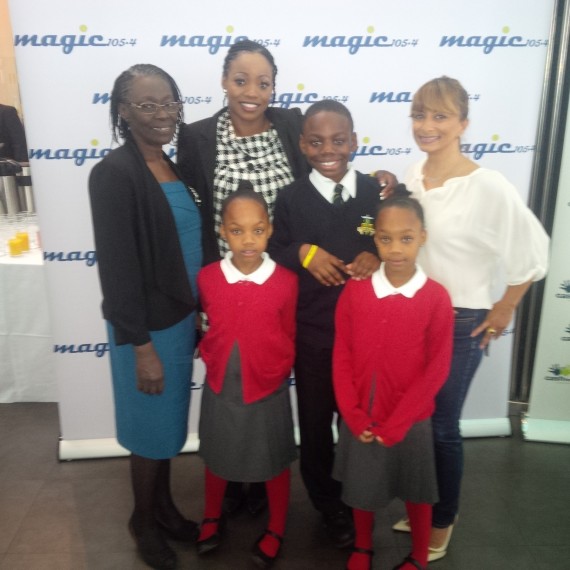 Boris Johnson told us: “It’s unacceptable that many of our young Londoners are going to school hungry. I hope that London’s Biggest Breakfast on 12th September will encourage more people to get involved so that this initiative can reach more children across the capital.”

Neil Fox added “My three children always go off to school with a good breakfast inside them, but not all kids are so lucky. London’s Biggest Breakfast will help pave the way to healthier and happier children who are ready to learn at the start of their school day.” 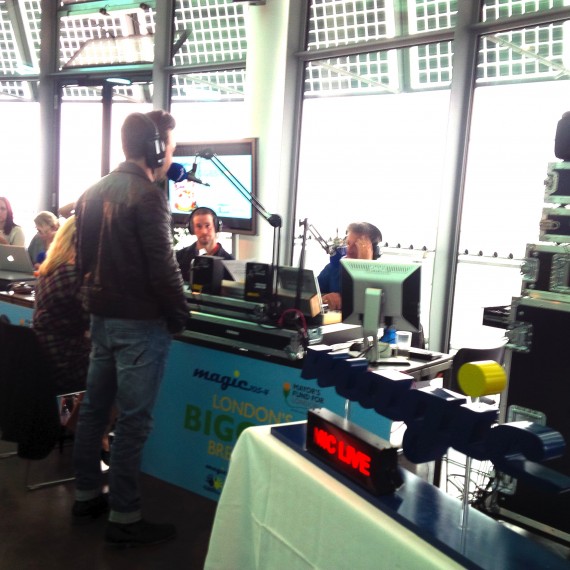 Cyrus Todiwala OBE said” A nutritious breakfast is key to the well being of our minds and bodies and especially for school kids who need to start the day fit and ready to concentrate on their lessons. Not just parents but kids themselves have to learn the value of a good, balanced breakfast and it should become part of their cooking repertoire, cooking being an indispensible life skill. You don’t have to be a trained chef to prepare a nutritious breakfast. London’s Biggest Breakfast is a great initiative to support the healthy future of London’s young people.”

The positive impact of the Breakfast Clubs is clear with 93% of head teachers saying they result in increased concentration and energy amongst pupils. Lets ensure that our nations youth leave home daily with a healthy meal inside them. A happy tummy equals a smart functioning brain!