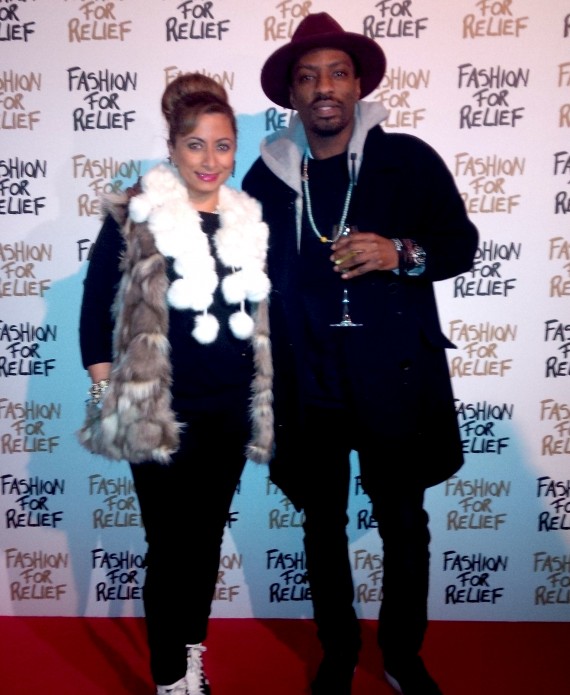 Miss Naomi Campbell. Spotted at aged 15 and catapulted to supermodel fame, then in the tabloids all through the eighties and nineties for being beautiful, her relationships with high profile men and the now legendary stories of misbehavior.
This woman has lived a life that fables and myths are built upon. Dining with and befriending legends like Nelson Mandela, Puffy, world leaders, leaders in every genre. But like Madonna and Angelina before her, she’s savvy to balancing fabulosity with pro-social causes and is a queen of moving to where the cheese is. 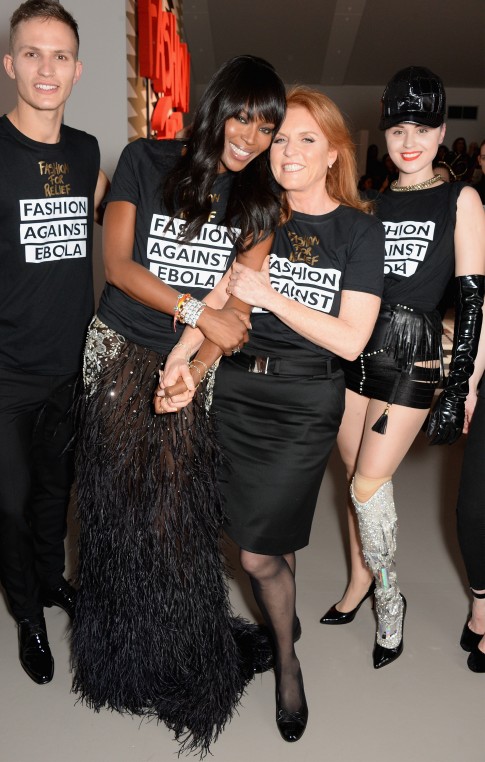 In the last decade she has reinvented herself from a spoilt, tantrum reputed diva to a mature, socially engaged woman of the world trying to do brilliant things to engage people powered change. 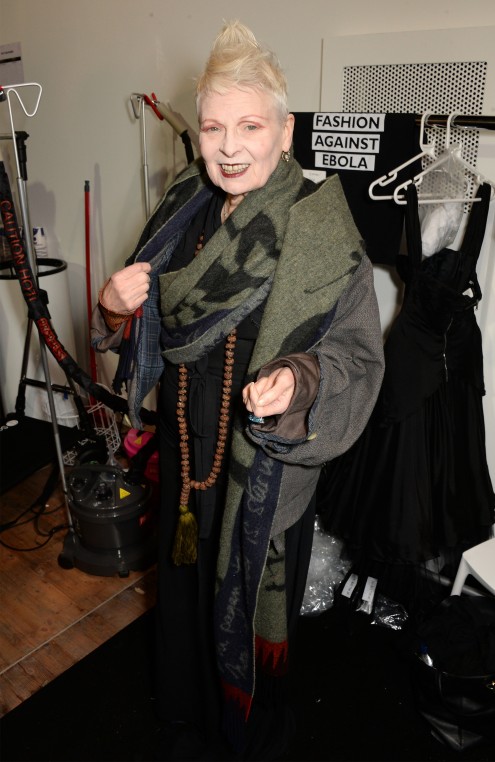 In 2005, she established Fashion For Relief and hosted its first charity fashion show to raise funds for victims of Hurricane Katrina in
New Orleans. Since its conception in 2005, Fashion For Relief has presented shows in New York, London, Cannes, Moscow, Mumbai and Dar es Salaam, and has raised millions of dollars for various causes. 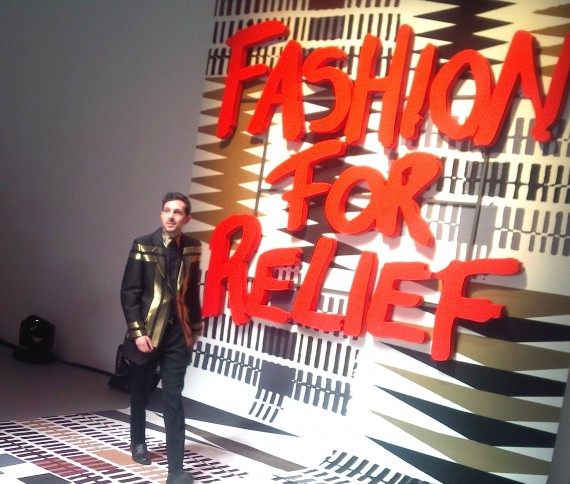 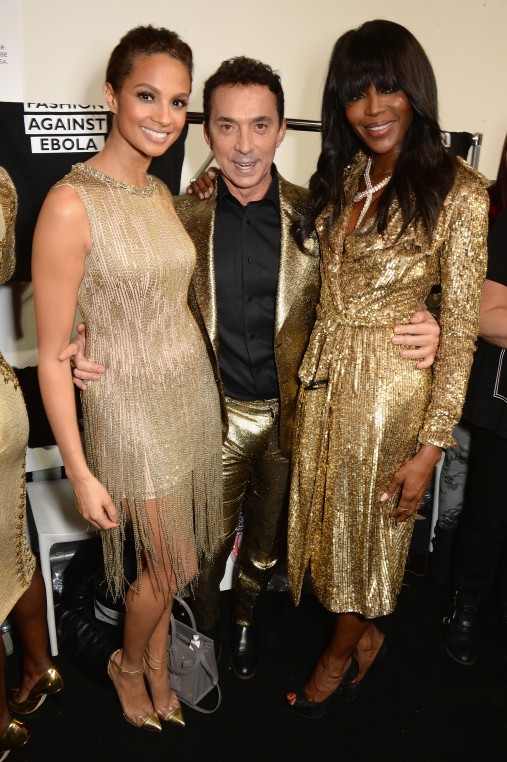 Last week Naomi hosted a Fashion For Relief charity show at New York Fashion Week and just a few days later on Thursday night she hosted another star-studded one here to kick start London Fashion Week. Putting her energies towards her fashion for relief fashion shows both in new york and here in London makes her a great pro-social example to all that follow and look up to her. 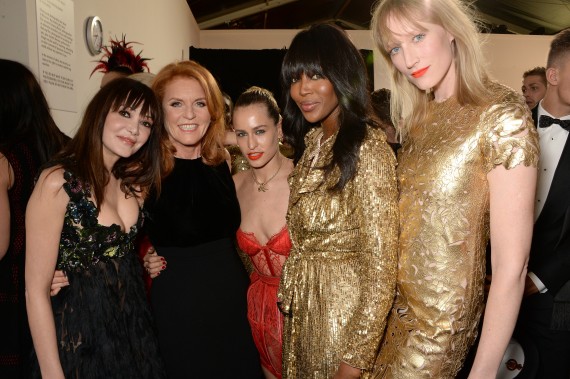 On arrival at the VIP champagne reception last night I greeted her mother Valerie and remarked on how impressed we were with Naomi’s continued journey. Valerie was most gracious and said she was proud and her daughters biggest champion. 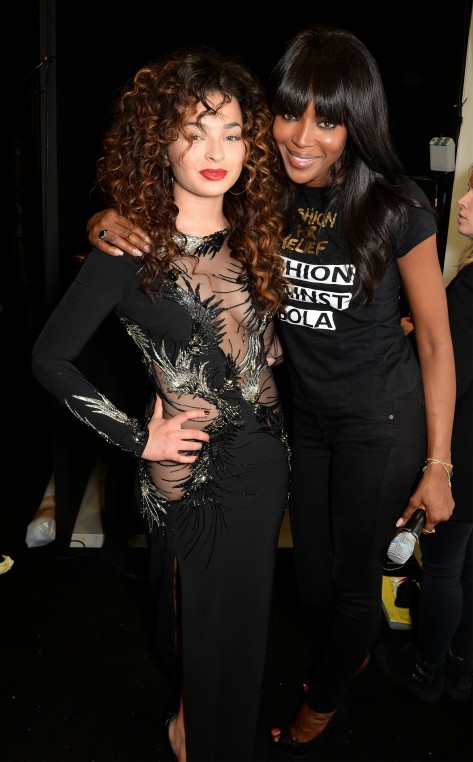 You can’t be a superstar these days without having a pro social cause that helps a community and Naomi has been involved in activism and charity work for many years now. We are living in the age of giving back and last night Naomi shone whilst raising funds and awareness for ebola with a star studded catwalk line up that walked in white, black and gold themed outfits. 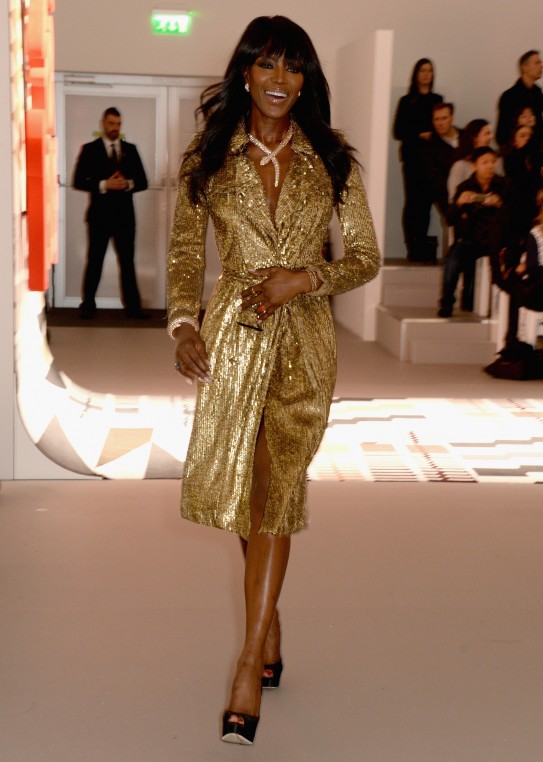 The outfits were fierce, fabulous and fine. The models were royal, remarkable and riotous. 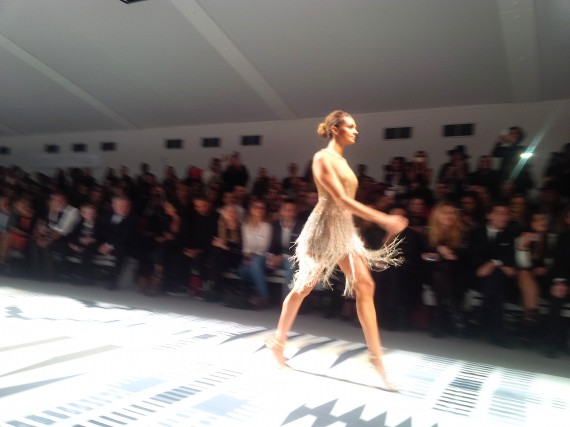 American film, television and stage actor, Jeffrey wright did the show intro and welcomed us all for what was an incredible spectacle. He said the main priority was to use events like this, as a key is to get to zero cases of ebola in these countries that were affected. 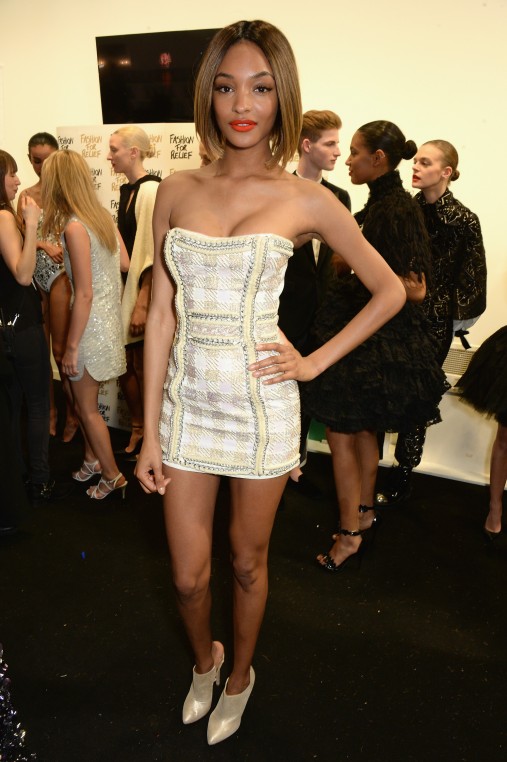 He drove home the message that

‘’In the USA, when the news of ebola so read globally and was hot in October last year, there was hysteria in the air and people panicked about ‘’what about when it’ll arrive in the states!’’. Then the awareness peaked off. We think that’s because in the UK and USA we’re powerful enough to control and cure people. When a person gets it here, a person gets treated in American and British hospitals and it gets cured and they leave healthy. On the other hand, Africans who get it die. That speaks volumes about the economics of these different countries. We must speak of the vulnerabilities and issues here. There’s not one hospital in Sierra Leone you’d want to be ill in. We want to build up the infrastructure in Sierra Leone’’.
‎He continued ‘’It’s powerful and appropriate that the fashion community comes together around this. I come from the theatre community, which was affected by aids. It took many years for many to even acknowledge this. The gay community back then said “no. We are the creative and most fierce community in this country and we will take this on and fight it. And so for the fashion community to come together to make this happen for the ebola cause is a great thing. I want to thank Naomi Campbell for taking the charge in this crusade!’’.

Commenting on the show Naomi said:

“I’m thrilled to return to London to open London Fashion Week for this very special cause close to my heart. The Fashion For Relief Show is an incredible event and this year we hope to raise more money than ever before. Raising awareness for Ebola and educating about its prevention is crucial to help prevent the spread of this deadly disease.”

Naomi and friends hit the catwalk at Somerset house hard! All happy and working it they joked, skipped, strutted and some even piggy backed and fell on their knees in excitement! 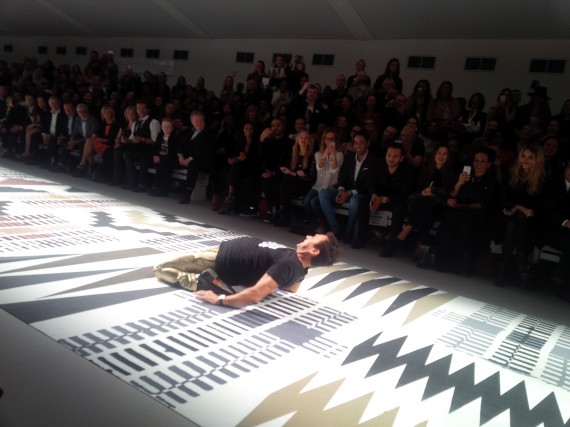 BRUNO TONIOLI FALLS TO HIS KNEES! 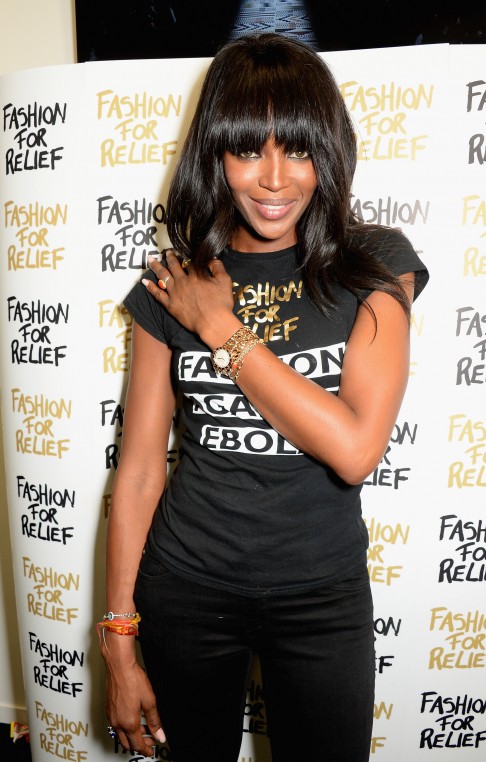 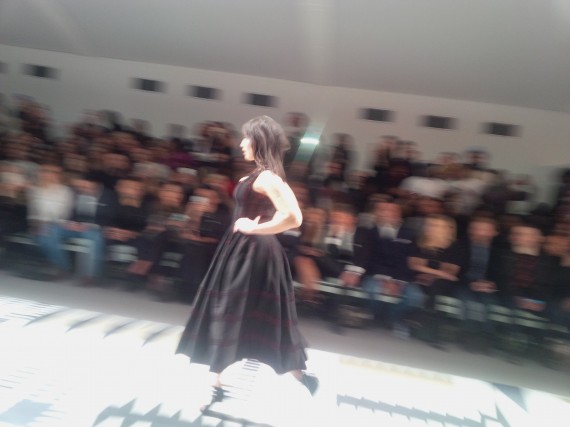 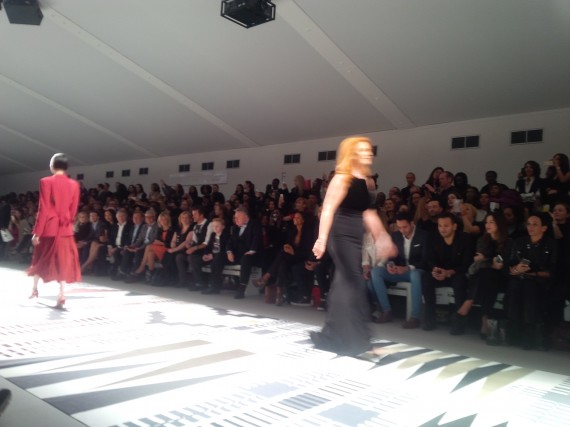 Other Celebrities in the house that I spotted were fashion blogger Bip Ling, Bob Geldof, Mark Wright, Michelle Keegan and Tanya Burr. 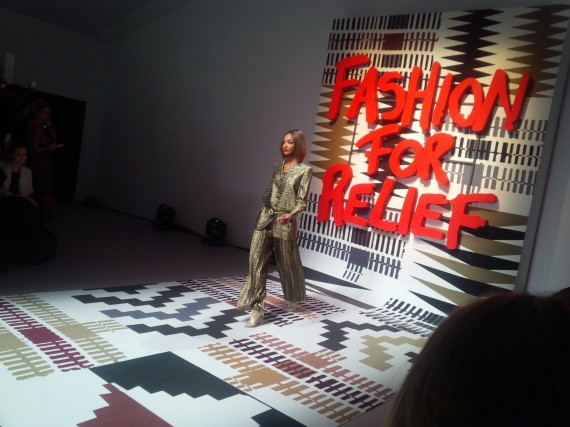 The show also included an exhilarating auction, where member of the audience bid on incredible items including The Tracey Emin piece ‘Just A Thought’; an exclusive holiday to the Maldives; a Bvlgari Watch; a limited-edition Mert and Marcus Naomi print; and an Alexander McQueen dress. All funds raised on the night will go to raise vital funds and awareness towards the fight against Ebola. 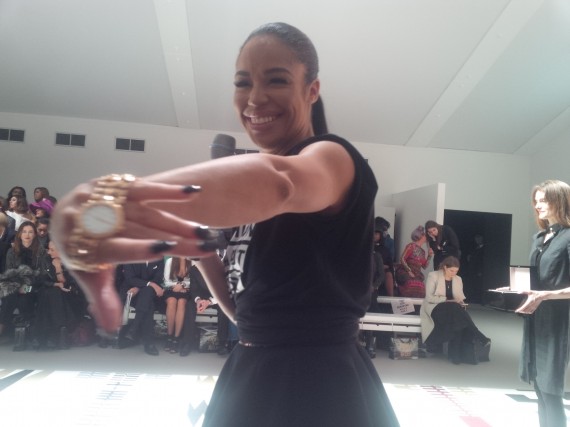 SARAH-JANE CRAWFORD HOLLERS OUT TIM WADE AND MYSELF IN THE SEATS TO BUY…WE PRETENDED NOT TO SEE THE UBER EXPENSIVE BULGARI WATCH LOL! 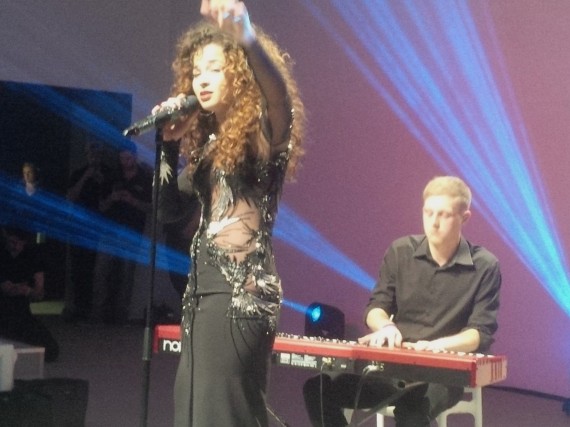 Naomi had to take guests to task at one point when an Alexander McQueen dress modelled by Daisy Lowe wasn’t raising enough thousands in the post show bid. She cocked her hip and lip out and pointed at high net worth individuals in the crowd and name checked them into parting with more cash for the cause. The strop was most certainly …..as L’Oreal would say….worth it! 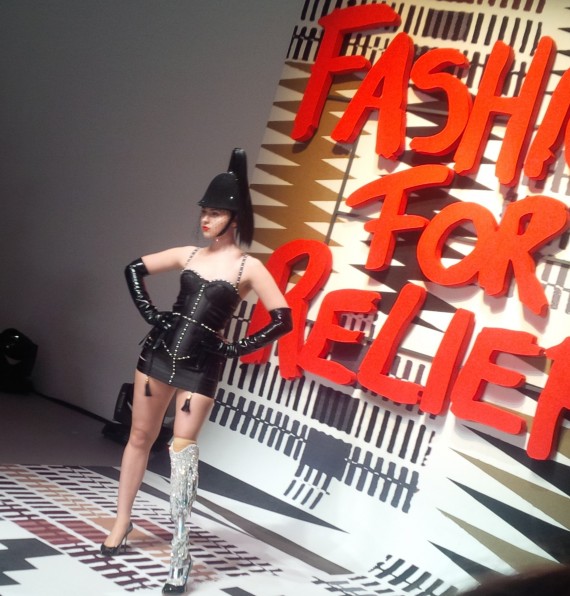 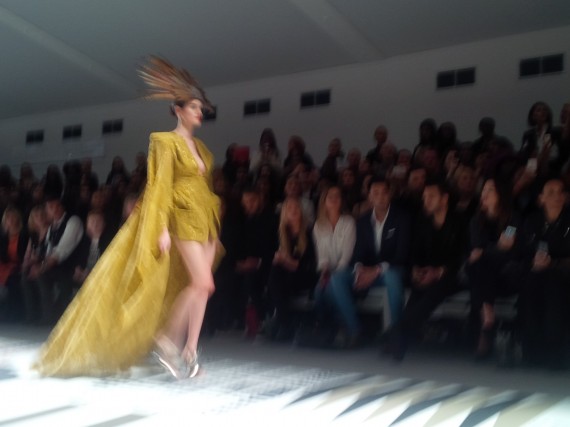 Naomi was overjoyed at the end of the night, “Tonight has been incredible and I am so thankful to everyone who has been involved to make the show such a brilliant success. The fight to raise awareness and bring aid to those affected by Ebola is a cause that I am so passionate about. I sincerely hope the funds raised from tonight’s show will hopefully make a difference to those affected by this terrible disease.” 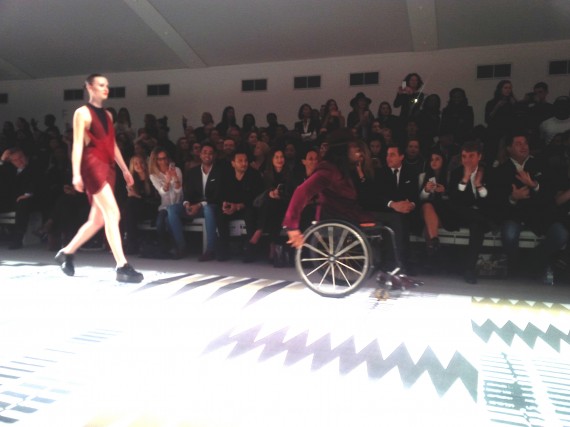 Make up was provided by MAC by Charlotte Tilbury Team. With hair styled by Johnnie Sapong @ Jed Root, using Eimi from Wella Professionals.
Fashion For Relief was pioneered by Naomi to mobilise funds for charities close to her heart. This year, the show helped to raise vital funds and awareness towards the ongoing fight against Ebola, with all proceeds going to support the Disaster Emergency Committee: Ebola Crisis Appeal www.dec.org.uk/ebola and the Ebola Survival Fund http://ebolasurvivalfund.org/ 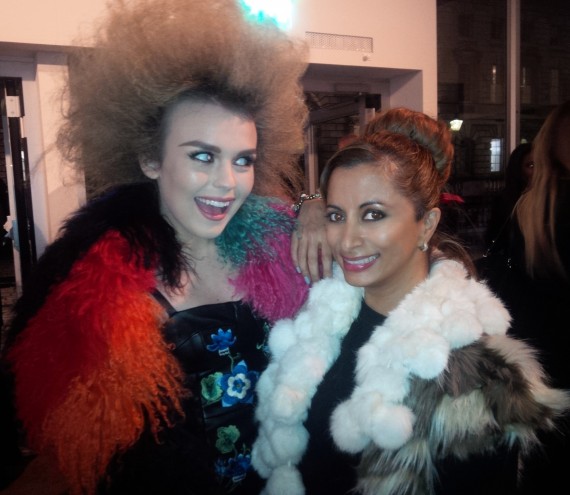