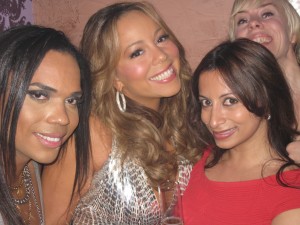 In all my years of ping ponging back and forth across the Atlantic from new York and working with the biggest music artists in the world can you believe I had never seen a gig at the world famous venue Madison square gardens? I had been there for MTV VMA related stuff but never to see a gig. Well to kick start 2010 that was all changed!. New York was as excitable about Mariah kick starting her US Tour out in Manhattan as Jigga fans convinced he’s a part of the illuminati.

So on a cold, snowy, biting day where the NY wind was zooming through the cross streets with vicious unforgiving cyclone like speeds, we were picked up from chez Carey-Cannon at 4pm to make our way to MSG in the black giant SUV convoy. We were there early for sound check as the streets around the venue were pandemonium with police locking off roads in preparation for the thousands that were gathering. MSG corridors were full of excited dancers, singers and celebs. As I walked through the backstage dressing room corridors and spotted framed superstar live photos from all walks of life on the walls I was awed at the venues history! .Its not called the worlds most famous arena for nothing!. Backstage Mariah’s dressing room was large and airy but they’d made it seem lovely and cosy,all white silk drapery, it was candle fragranced and luckily nice and warm as Mrs C was having her outfits fitted and resting her voice before she hit the stage.

The legendary choreographer Debbie Allen –who had choreographed the show-was busily getting everyone together. The best sounding vocalists anyone could ever have – Maryann Tatum, Trey Lorenz and Sherry Tatum Frederick- were warming up their vocals and keeping us entertained backstage with raucous laughter and much family style fun and frolics. The dancers were stretching, techs were running around and all was very backstage MTV Diary feeling LOL. As it was my first MSG experience I decided to take my excited ass out into the main arena corridors to check out the vibe which was beyond hysterical by fans that were by now merry and in the mood to party .I even passed a few folks I’m sure I recognised from my twitter page! Never met them but smiled as I passed in acknowledgement!.

I always stop to check out artist merchandise to see how creative they’ve gotten but my eye was drawn to a great keepsake-the official tour programme-$25. So I bought 2. Flicking through it my eye froze over a certain page where I looked back at myself! There amongst Mrs C’s fun photos were 2 pics of me, MC and Brat on one of our vacation escapades a few years ago! . MC always looks amazing, Brat looked cute, and I was a freakin mess!. I wasn’t mad though. I was honoured to be included in such a superstars programme full stop but had to laugh at the fact that on that day I had thrown on anything at the last minute that didn’t match, AND my hair was an ocean dried mess!. I was rocking gold Adidas runners, denim shorts with the words ‘’bad gal’’ on them, a gold lame American apparel swimsuit and a Rocawear red, black and white classic trackie top-what a mess! Maturity must have kicked in though cos I didn’t give a s***. All animated I called my mum to tell her , she told me to focus on my own stuff and snapped me straight back to reality.

Starting the show were Nick Cannons new male vocal group Rydz N Rtists who were really good-the arena loved them. Thousands of hysterical young ladies were screaming for them to take their shirts off and all sorts-they were like the new Jodeci/ B2K and with no autotune helping their vocals I think they’ll go far. They’re signed to the music arm of Nicks company NCredible. Next up was heart throb Trey Songz who had a lot of ladies hysterical and screaming. After his set I actually had to accompany some young girls who shall remain nameless to his area to get autographs and photos. They thought I was the best auntie ever until we were told by his team that he’d just left to catch a plane. I sniggered under my breath as the lil ones all looked crest fallen. But not for long cos the main star they’d come to see was about to hit the stage!.

We returned to our backstage area, I checked to see that Mrs CC was ok and didn’t need anything but of course her assistant/friend Rachel had everything covered so we just chatted for a while. The arena was full of fans, friends, celebs and family. I hugged the ever charming, smiling  Stephen Hill (HEAD OF BET TV) tight as we caught up , Mariah’s co star in Precious- Gabourey “Gabby” Sidibe-was there with friends and as the house lights went down I thought my ear drums might actually burst with the screaming and roaring from the crowd.

Mariah came on around 10.30pm and for 2 solid hours sang hit after hit from her past 2 decades of smash hits wearing a number of diva esque outfits-at one point even summoning onstage her hair, makeup and assistant to ‘’refluff’’ her cos she was a diva. Loved that part-shes fly and she knows it and doesn’t give a daym what folks think-pip! The fans were delirious with excitement when at midnight she counted them down and a solid 2 minutes of pyro fireworks, confetti and balloons covered the whole stadium. Of course they were pink and lavender!. Even though I know mc has hits for days its not until uyou see her killing the stage for nearly 3 hours that you realise just how many! When ‘’Fantasy’’ dropped I jammed hard! Post show we hung out in the dressing room toasting the show with drinks before hitting nightclub M2 where Nick was dj’ing. Joining us were actress Gabourey and new American internet celebrity Love B Scott who is the hottest new celebrity blogger Stateside (check him out) and as we brought in the New Year Mariah asked me ‘’I have another show in Atlantic City tomorrow– are you coming?’’…..but I had made other plans already to go see the Alvin Ailey Dance Troupe as well the  hit show ‘’Fela Kuti on Broadway’’. But my life’s never simple and the next night my whole diary was remixed again with a crazy Thelma and Louise esque adventure. To find out how catch me next week!,.