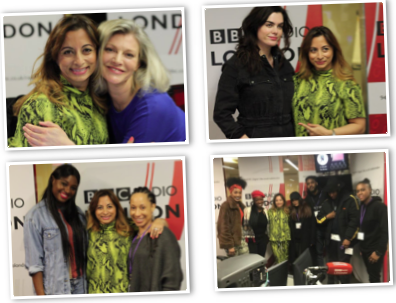 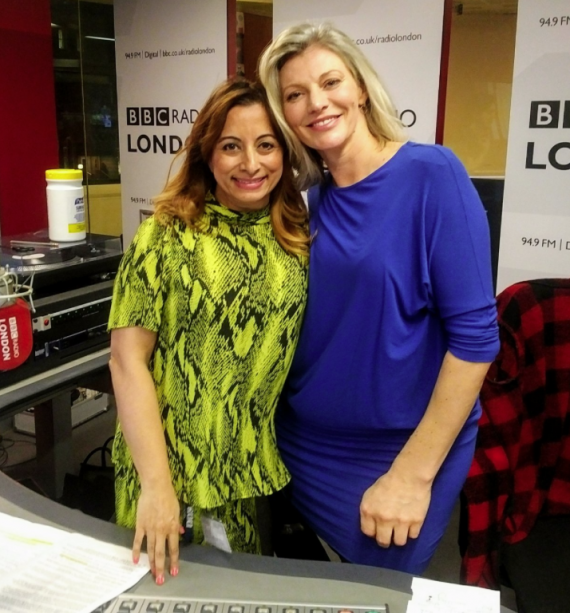 First to speak with Jasmine Dotiwala on how she is impacting the world through sound was guru Nicole Harvey who describes herself as someone who walks the walk, talks the talk, and believes strongly in creating change through art and healing.

Along with Nicole was a 32 inch gong that she brought with her to the BBC Radio studio. She refers to her gong as ‘he’, saying the gong has been attuned to Saturn which gives it a masculine energy that she challenges Jasmine to get near and feel.

Nicole who is originally from Yorkshire and now lives in North West London first became passionate about sound therapy when she began healing for herself through classes that provided gong baths – an ancient Chinese activity (with no water or tub involved!) that encompasses therapeutic brain alteration through deep sounds. She enjoyed escaping and going on meditative journeys with sounds she says are otherworldly and cosmic, and then began to train herself further in gong bathing,

She says it doesn’t matter if you’re a cynic, the science backs up that gong baths are brilliant for stress relieving and opening blood cells up.
Live on Jasmine Dotiwala’s show, as she would in her classes, Nicole takes her gong mallet, lightly thuds her gong, and leads London into a highly and shockingly relaxing gong bath – at no extra cost!

She says in classes, trap nerves have been released, kidney stones have been shifted, insomniac sleep and anxiety sufferers healed and much more. Nicole begins to then teach that not only are gong baths helpful, but we can also stimulate the mind by incorporating ‘mantras’ – she leads us to put our hands on our hearts, breathe in, and make a long ‘aah’ sound, a sound she says generates compassion.

It’s safe to say that Nicole left the London listeners spiritually enlightened. For more relaxation, you can find her at www.haveyourmagic.com and @Haveyourmagic on Twitter.

Next up is 27-year-old Charli Howard, a model and body image activist who once wrote a blog post that went viral when she was fired by her modelling agency for being ‘too big’. 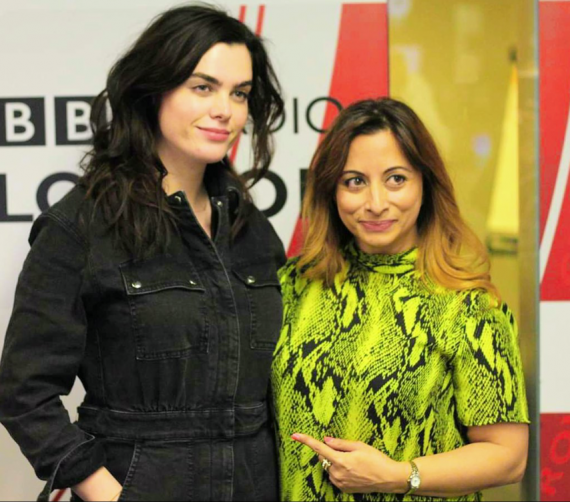 She has created The All Women project which goes into schools to teach body positivity, written a book and has been featured in magazines from London to L.A including British Vogue. She is now also a body positive columnist at Glamour UK as well as the new campaign girl for underwear brand Agent Provocateur.

Charli, who was always steered away from journalism by her family, decided to embark on a course called CREATIVITY WORKS with Media Trust that would introduce her to new journalistic skills. But when she was dropped by her modelling agency midway through her course, it was then that she would then use those skills to write a fiery blog post.

The post reads: ‘Here’s a big F you to my now ex-modelling agency for saying that at 5ft 6 inches tall and a UK size 6-8 I’m too big and out of shape to work in the fashion industry. I refuse to feel ashamed and upset on a daily basis for not meeting your ridiculous unattainable beauty standards and the more you force us to lose weight and be small, the more designers have to make clothes to fit our sizes and the more young girls are being made ill. It’s no longer an image that I wish to represent. If an agency what to represent me for the woman I am, I’m more than happy to take your calls, but until then I’m off to Nandos’.

After this blew up, a very shaky Charli was approached by some of the biggest broadcast companies, and with the help of Jasmine Dotiwala (her then tutor) on the Media Trust course, she was able to represent herself and speak further on her story to companies like the BBC.
Charli says that despite being a size 6 at the time and suffering with an eating disorder, she gained weight and was approached by an agency to work in New York doing plus sized modelling.

She says that on entrance to the agency were two walls, one showing catwalk models who looked very moody, and on the other side where there were only about twelve cards were women radiating with smiles. Charli says she was surprised that the plus models were the ones who were actually happy and enjoying themselves.

Charli admits that calling a size 10-12 model ‘plus sized’ is controversial, but that in her being one, she is representing women like herself who still find it gravely difficult to get by in the fashion industry.

Charli says if she could speak to her 15-year-old self, she would tell her to surround herself with good people and unfollow accounts that make her feel bad or insecure about herself. She also says you absolutely do not need professional photos to get into modelling – an aspiring model can take a quick photo of themselves with no makeup on or simply walk into an agency!

Charli speaks on her All Woman project, in which she got together both slimmer and plus sized models to create unity between all. She says she was then approached by big companies to then help strategise to make body positivity a main component of their brands.

Charli continues to rock the industry, you can see what she is getting up to on Instagram @CharliHoward. 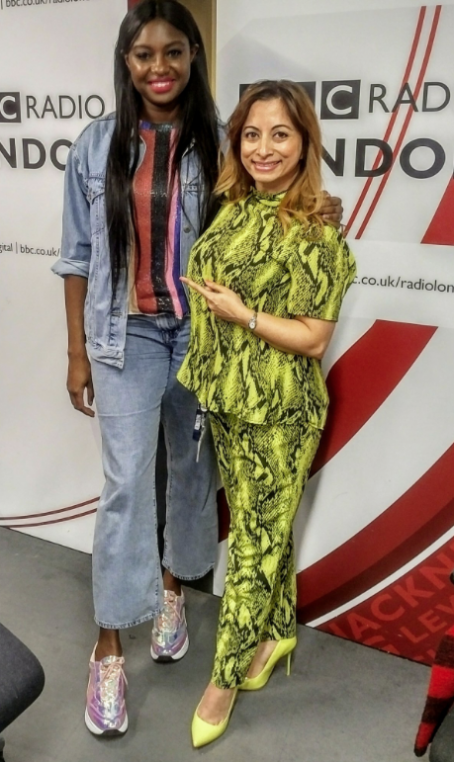 JASMINE WITH SONG WRITER TO THE STARS JIN JIN

The 3rd guest in the studio to speak on song-writing and music production is song writer to the stars Jin Jin.
Mancunian girl Jin Jin has co-written dozens of chart topping songs including ‘Hold My Hand’ by Jess Glynne and ‘Alien’ by Jonas Blue and Sabrina Carpenter.

She has worked with people of the likes of Fraser T Smith, Dave, Ms Banks, Raye, David Guetta, Sigala, Rita Ora, Paloma Faith, Madison Beer and many more, and has received accolades at platforms such as Women in Music Awards.
Jin Jin says she has been writing songs for five years and started in her grandfather’s reggae record shop. She soon progressed into the music scene at university where her friend introduced her to artist Target.

Jin Jin who was already known for working with grime groups such as Roll Deep, says she started to be noticed through collaborations with any one she was interested in. She says it doesn’t matter whether or not someone has accolades in song writing and advises people to work with anyone who is talented.
Jin Jin says she met Jess Glynne 5 years ago and would create songs with her in local pubs. She says she enjoys meeting up with artists to connect with them and understand their stories before making songs – almost like a councillor!

When it comes to creating the actual songs in studios, Jin Jin admits that she and even the artists she works with don’t usually have many diva demands. She says that studio time is typically a moment for top artist to be themselves, let their guards down, remove egos and be comfortable in a relaxed, closed and safe environment.

Many of us wonder why songwriters desire to be behind the scenes rather than taking the front line fame in projects created by themselves. Jin Jin tells Jasmine that she would never move into singing on stage, rather she feels satisfied with simply bringing ideas to the table and letting the artist bring it to life. She also say that her Mancunian accent makes things sound a little funny, she’d rather not embarrass herself!
We think Jin Jin is amazing whether behind the scenes or not! Keep up with her new projects on Twitter @jinjinofficial 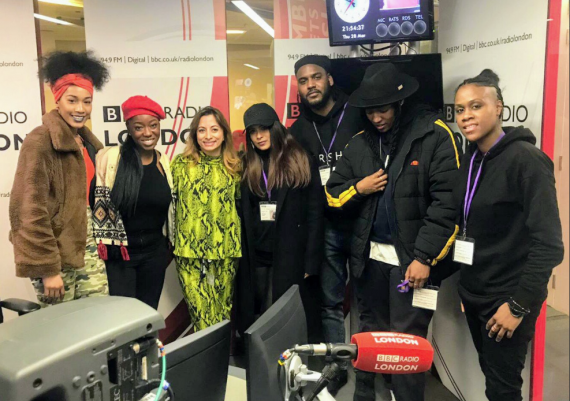 JASMINE WITH THE CLUB FRSHZ CREW.

Last but certainly not least on The Scene are revolutionary music group Club Frsherz whose compilation of new songs seeks to empower and support all black people through positive and personable affirmations.

To speak on their ‘Black playlist’ are three of six members of Club Frsherz. Founder of the group Skandouz says his inspiration to get the group together was a dear friend dying of sickle cell anaemia, he says there are not many positive representations of black people. He wanted to tell their stories and decided if nobody else would do it, he would.

Coco 7, a female musician says she was excited to collaborate with Skandouz on the project to promote an ethical message about black people. Miss Ranger, a pianist says she enjoyed music from a young age but fast realised she could not sing. It was here that she discovered NWA – her view on music would change forever. And Zara Sykes who has also been rapping from the age of 9 decided she would jump on the project to represent Birmingham.

Creating a combo of ten separate songs all made by women including ‘Buy Black’, ‘Black Friday’ and ‘Young Gifted and Black’, the album boldly and fearlessly promotes black intelligence, empowerment and uplifting of a race usually outcast and seen negatively.

Skandouz says his team are wordsmiths who challenge themselves to think outside the realm of popular profane language within their songs. They say they do not condone the ‘N’ word or any type of profanity in their music, adding that you can be edgy whilst still being respectful within your speech. Club Frsherz says children should be open to a wide world of vocabulary. They seek to build a legacy rather than create quick, throwaway music that so many people are currently creating.

Coco 7 says she celebrates black women as there is not enough range in the industry. She says she blames the industry and the cogs behind the machine that doesn’t allow a wide range black women to make versatile music – female MCs are lead into the industry one at a time. Whilst many would say that the music she makes excludes people of other races, Coco 7 says that in fact the movement is inclusive, allowing women who have been ostracised to be a part of doing something great that they otherwise would not have the opportunity to be part of.

Full information on all members off Club Frsherz and their impactful movement on Twitter @ClubFRSHERZ!