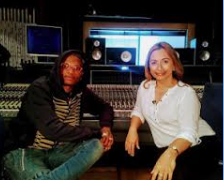 Launching this week – the first ever Official UK Afrobeats Chart celebrating the rise of Afrobeats, unveiled 2pm every Sunday

Revealed: UK’s Official Top 20 Afrobeats Artists of the past 12 months + playlist of their biggest tracks

This week sees the launch of the first Official UK Afrobeats Chart – a new Top 20 weekly rundown spotlighting the fast rising Afrobeats scene in the UK, initiated by celebrated festival Afro Nation and compiled by the Official Charts Company.

Understood to be one of the world’s first official charts for the genre, the Official UK Afrobeats Chart is to be compiled using UK sales and streaming data from over 9,000 outlets, incorporating physical sales, downloads, audio streams and video streams.

The chart is described as a landmark moment for a genre whose growing influence on popular music culture is exploding across the globe – driven by a growing community of independent and major label artists.

The Top 20 chart will be published every Sunday thereafter at 2pm via a weekly Spotify ‘Official UK Afrobeats Chart’ playlist featuring the 20 biggest Afrobeats tracks of the week plus a bonus slot to spotlight a new release for listeners to discover. A weekly video countdown on the Afro Nation and Official Charts social channels, with the full chart published on OfficialCharts.com.

From the early breakthrough days of Fuse ODG and D’Banj, the wider UK scene that emerged with Mista Silva and Atumpan all the way through to the Mercury Prize-nominated success of J Hus, British Afrobeats has taken important steps into the mainstream over the past decade. It has taken big strides in the live arena too, as evidenced by Wizkid and Davido’s multiple headline nights at London’s O2 Arena, while 20,000 fans travelled to Portugal for Afro Nation last year.

New analysis from the Official Charts Company shows that in 2019, Afrobeats artists collectively spent 86 weeks in the Official Chart Top 40, a significant swing upwards from 24 weeks in 2017, while the number of tracks entering the UK Top 40 with either a lead or featured Afrobeats act more than doubled in the same period.

In 2017 just one artist from the genre broke into the Top 10: Afro Swing champion Kojo Funds, who collaborated with Mabel on Finders Keepers. Fast-forward to 2019 and the number of tracks achieving a Top 10 placing rose six-fold, spending 18 weeks inside the Official Singles Chart Top 10 across the year.

In more recent years, talents such as Burna Boy, Mr Eazi, Not3s, Wizkid and more have picked up the mantle from the genre’s pioneers to influence music both within the scene and in the wider pop field. Nigerian singer-songwriter Wizkid found runaway global success in 2015 after being approached by Drake to deliver the Afro-influenced smash One Dance, now the UK’s longest-running Number 1 single of the millennium spending 15 weeks at the top of the Official Chart. With his latest album out now, Wizkid is expected to be a contender for early success in the Official UK Afrobeats Chart.

A deeper exploration of Afrobeats

However, the genre runs far deeper than those records that have crossed over into mainstream chart success, the development of the Official Afrobeats Chart aims to enable its deeper exploration. According to test data for the new chart, an average of 50% of Afrobeats Chart entries are independent releases – this is a scene with much more to come, with many grassroot acts and future hits yet to be discovered.

Revealed: The UK’s Top 20 Official Biggest Afrobeats Artists Of The Past 12 months

To celebrate the launch, a new Official Charts Company-compiled list of the ‘Official Top 20 Afrobeats Artists Of The Past 12 Months’ based on official UK sales and streaming data is unveiled (see table in appendix) with an accompanying playlist.

Embed the playlist from Spotify, Apple Music or Deezer, embed codes in appendix.

London rapper J Hus heads the power list – the 24-year old landed his first Number 1 on the UK’s Official Albums Chart with Big Conspiracy back in January. The album is on its way to gold-certified status with Top 5 single Must Be proving its most popular track, amassing over 38m UK streams to date.

Nigerian singer-songwriter Burna Boy clocks in in second place – while his biggest Afrobeats track of the period is Ye, Burna Boy also appeared alongside Stormzy and Ed Sheeran on the Number 1 single Own It which has racked up over 1.1 million combined UK chart sales to date. Hackney six-piece NSG place third on the ranking, their biggest hit of the year being Top 10 single Options (ft. Tion Wayne).

Collaborations are a theme of the genre’s most popular tracks among the British public – pairing up with stars of the wider music scene is working to bring the Afrobeats sound to a broader audience. 21 year-old Croydon/Congolese rapper Ziezie has reached the Top 40 of the Official Singles Chart three times since 2018, but a hit collaboration with Manchester rapper Aitch on Buss Down propelled him into the Top 10 for the first time back in October. Ziezie takes up sixth place in the list of Afrobeats’ biggest players.

The UK’s overall biggest Afrobeats hit of the past 12 months however comes from Nottingham duo Young T & Bugsey who finish in 7th place in the artists rundown – their track Don’t Rush found viral fame on Tik Tok through the #DontRushChallenge. The female creators of the challenge who span Congolese, Nigerian and Sierra Leonean origins aimed to empower women to embrace their beauty with and without make-up. Passing a blusher brush as a baton, the internet challenge saw women across the globe conquering quarantine boredom by transforming into their going-out looks and celebrating the diversity and pride of the African diaspora.

The Official UK Afrobeats Chart promises to be a rich celebration of a culture in full flight. Born from joyous celebrations across Africa, the Afrobeats genre represents the spirit of a people and a continent, welcomed around the world and a key component in the sound of modern culture – from the pioneering days of Fela Kuti and Tony Allen, through dance and UK rave culture to the continued success of the genre throughout Africa and the world.

“Afrobeats has always been about culture. From day 1 I’ve always blended my language and background into my music that’s why so many people connect with it, especially the African diaspora. African music down to the instrumentals are very spiritual and makes people feel good. The genre is a force to be reckoned with, It’s about time there was an Official Afrobeats Chart, and be sure to see Naira Marley at the top!”

“It’s a great thing to witness Afrobeats finally receiving the international success and recognition it deserves. Afrobeats is more than just a genre to me, it’s part of my identity, my culture, it’s in my blood and I’m honoured to be a part of the movement.”

South London female rapper Darkoo, whose track Gangsta (with One Acen) is the biggest female-lead Afrobeats track of the past 12 months:

“Africa to the world and back! It’s nice to see recognition of our music in the Official Charts, it’s a real game changer. We’ve gone from listening to Afrobeats on a more cultural level to now seeing it in a commercial space – nice to see!”

“I believe that the rise of Afrobeats has played a massive role in shaping the music scene within the UK & across the globe. For the last 10 years it has provided inspiration, confidence in identity, confidence in culture & pushed the boundaries of the music industry. It’s beautiful to see the growth & exciting to see where it goes.”

“Being the “King Of Afro Dance” I believe that through African dance, Afrobeats has impacted the world and the UK massively. Our culture has come and is now here to stay.”

“Big honour for me to be part of the biggest movement in music right now…..The Official UK Afrobeats Chart. It’s for Us, by Us and of Us!”

“The UK Afrobeats Chart couldn’t have come at a better time. Everything we do is to move our culture forward. I’m honoured to be part of the most exciting thing in music right now. I hope to see even more genre diversity with time.”

“As someone who has seen Afrobeats grow and grow around the world, hearing the news of the Official UK Afrobeats Chart is an honour. Our culture has been making waves across the globe, and to see this opportunity for new, emerging and loved artists to elevate to new levels is a joy. Can’t wait to make a mark on those charts over the coming weeks, months and years ahead so stay tuned!”

“Afrobeats is currently one of the most exciting genres out there now, it’s an amazing feeling being part of the history and to be recognized by the Official UK Afrobeats Chart as one of the important people elevating this genre to the world stage, an exciting time for Africa!”

“I am very proud and honoured to be a part of what will be a significant shift in the way our music is represented in the UK and we can now also begin to educate many others on the wider DNA of African music and culture, through the Official Charts.”

“Africa is the heartbeat of this entire world and has been influencing pop culture for centuries. This moment is long overdue and I’m super excited to see how far we go from here.”

“It’s an incredible moment for our culture to see the launch of The Official UK Afrobeats Chart. For years, we have celebrated, danced, partied and united underneath the incredible sounds and artists making Afrobeats and African music their own, and to see our culture now recognised in this way is a truly powerful turning point. Providing support and empowering the new artists that will go on to be hugely important leaders in our culture, it’s another sign of the unstoppable popularity the culture has around the world, and I can’t wait to hear the songs, watch from the side of stage and dance together as we reach new heights.”

“1Xtra has been committed to championing the Afrobeats scene since our formation and we’re excited to support the launch of the first-ever UK Afrobeats Chart. This is much-needed and long overdue. We’re proud to be a part of history.”

Kofi ‘Funkz’ Kyei, Artist Manager and Head Of Marketing at independent record label MOVES Recordings and one of the team responsible for the charts creation says:

“It has been amazing to witness over the past decade the sheer growth in African music being welcomed by the UK and the international market. A scene that defines a culture, a people and countless generations, its music has soundtracked underground culture for years, being the go-to sound in clubs, parties and communities in a way that’s shaped our very culture. For too long, Afrobeats artists have had to work tirelessly to get their voices heard and now African music/Afrobeats is finally being seen as a leading sound that global superstars turn to on a regular basis. The Official UK Afrobeats Chart will help open up the culture to new audiences, giving emerging artists the opportunity to be heard whilst celebrating the sound of a continent that has gone global. Its importance can’t be measured and I look forward to celebrating the biggest and best tracks each and every week!”

“We are delighted to be supporting Afro Nation in the launch of this new Afrobeats Chart. This fast-growing genre is having an increasingly powerful impact on the music landscape right now, both in the UK and further afield, through artists including the likes of NSG, J Hus and Burna Boy. We’re thrilled to be helping cast a spotlight on this success through the development of the genre’s own dedicated weekly chart.”