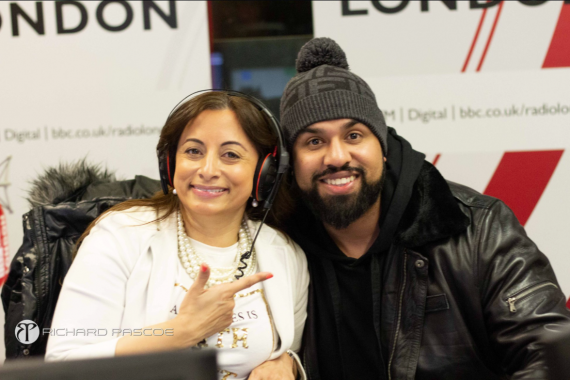 The Scene presents four different inner city London men who as individuals found their way from struggle to strength.
Speaking to Jasmine Dotiwala, they represent ways in which they were able to transform their narratives into literature and entertainment as a means of telling their stories.

First, one of the U.K.’s most popular Asian comedians and creator and star of hit YouTube show ‘Diary Of a Badman’, Humza Arshad. Humza who grew up in Streatham and has generated 96million views on YouTube says growing up he was only remotely good at making a fool out of himself. It was then he realised that he could use his curious talent to make others laugh.

Diary Of A Badman which has now almost become a household name and the cause of heavy, rumbling laughs across the U.K. was born out of frustration when Arshad realised that he would be subject to prejudice in the entertainment industry for being a Muslim man. Like many other rising social media stars, rather than ‘wait for the phone to ring’, he decided to set up shop creating short online skits in 2011 which would soon garner the attention of the BBC and other production houses.

In his most recent project, a children’s book that has gained astounding traction, he recalls being approached by Penguin speaks on whether or not he believes the new-fangled diversity movement in publishing is genuine. Irrespective of it, he says that representation is extremely important and is therefore content in the fact that publishers are finally seeing the need to influence young children of BAME backgrounds as well as white.

In June and July 2011 jointly with the Met Police, Arshad visited schools to give presentations to students. Discussing topics and issues encountered by teenagers living in London, he says he found that it wasn’t only Asian boys connecting with his work.

Arshad says he has inspired hundreds of the children to read – including his younger cousin who once was unable to get away from his PS4! However he declares that he will never be content until he reaches new heights in TV, film, publishing and other forms of entertainment.
————– 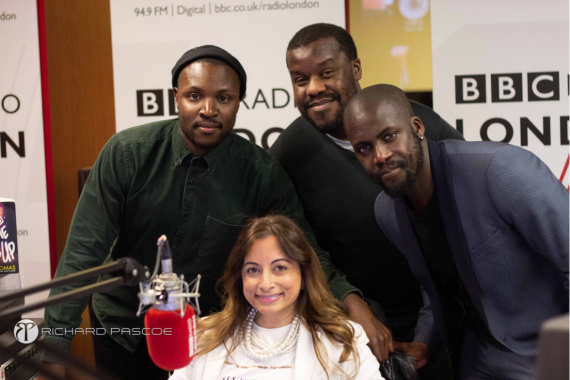 Second to feature on the show were three Black male authors who recently wrote the newly published book ‘SAFE’.
Derek Owusu who is the host of hit podcast ‘Mostly Lit’ – and who also edited the new book ‘SAFE’, Symeon Brown who is a reporter for Channel 4 News, and Nelson Abbey, a media executive whose book ‘Think Like a White Man’ also comes soon to Canongate publishing firm.

Written by and for 20 British black males occupying a range of different work industries and professions, ‘SAFE’ describes the experiences of black men in all facets of life from mental health to colourism, and violence to homophobia.

The trio begin by sharing some funny yet pretty alarming experiences they have been through as black men in the workplace and in wider society, such as having to look over their shoulders if huddled as a group in order not to alarm their white colleagues – something many black people can relate to!

Derek Owusu speaks on how the idea of the book came about explaining that there was a dire lack of Black authors; in 2016 there was only one Black British debut fiction author published in the U.K. It was here that he decided to round up 20 Black men for the ultimate writers’ link up.

Nelson Abbey and Symeon Brown both go on to explain how keen they were to join as authors for the book, and both speak on their vastly diverse chapters.

Channel 4’s Symeon Brown begins by delving into the problems surrounding the availability – or lack thereof- of social and dance spaces for black men in London.

Speaking on Hackney’s now closed down club, ‘Vision’, he says, “Where you go to dance as a Black man is hard”, adding, “a part of the dilemma and question that I was posing in my piece (was) where do black men go to dance spontaneously”. He explains the difficulty of finding spaces in London’s increasingly pricey clubs and speaks on the hierarchy of network that Black men must be acquire if wanting to infiltrate West End clubs without being turned away at the door. He goes on to speaks about places in Shoreditch which he says are supposed to be more ‘open minded’ slowly becoming harder to turn up at for an impulsive night of fun.

Nelson Abbey on the other hand speaks about the portrayal of ‘the Black male image’, and who in the media controls it. In his chapter he touches on four themes in the entertainment industry which he believes black men fall into; ‘comical, childish, cringe worthy and criminalised’. He uses Big Narstie as a prime example, a former rapper and comedian who blew up after videos of his rollicking laughter and rumbustious jokes started to go viral over social media. Subsequently Big Narstie was given a TV show with Channel 4 called ‘The Big Narstie Show’. Abi describes him as ‘infectious’ and ‘charming’, but also says that through no fault of his own, Big Nasrtie, ‘a brother trying to make an honest living’, has been defaulted into the Minstrel; the sparsely articulate, physically over-expressive bafoon playing up to preconceived wild black stereotypes largely for the consumption, comfort and confirmation of white audiences.

Despite his disappointment in the default dumbing down of the Black man, Nelson goes on to speak on mortifying experiences he has had being told that he is not black enough due to being too ‘intelligent, middle-classed and successful’. He expresses times having to challenge former bosses but also how he balances his ability to codeswitch in certain situations.

Derek Owusu says SAFE was written to outline the vast difference in racial experiences between the U.S. and U.K. are hopes to one day get SAFE on the educational curriculum When asked whether or not the new movement in BAME writers was simply a box ticking exercise by publishers, Nelson Abbey admits that books are getting signed but people are not getting the promotional push and follow through, he hopes however that as more people from BAME backgrounds get published, that they find the ways to push through by their own means.

You can find more about SAFE by checking the hashtag #SAFE or #UsManAreSafe on Twitter.