So this week, one chilly night in London town, the film premiere for SELMA took place in a small cinema in Mayfair, off the beaten razzmatazz red carpet arena of Leicester sq. 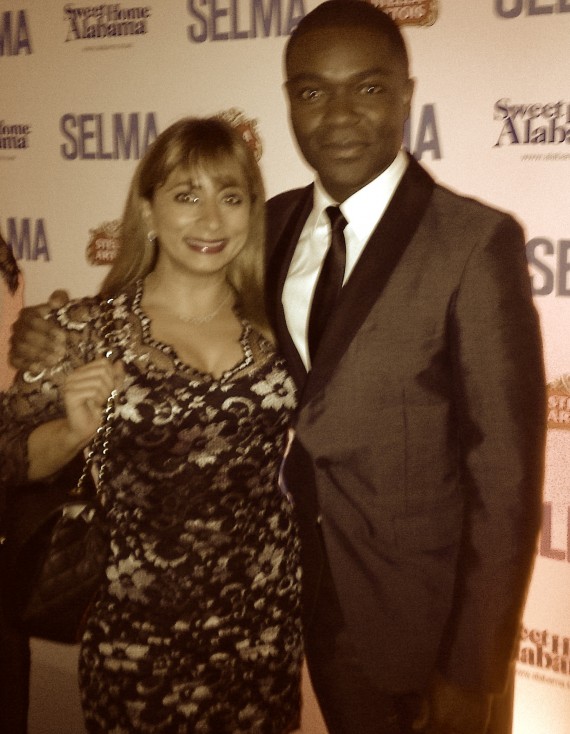 Remarkably, this is the first biography about MLK made for the big screen. The film is about a very specific moment in the city of Selma, Alabama, when black civil rights activist Martin Luther King (MLK) life, had given his “I have a dream” speech and received the Nobel peace prize, but was still frustrated by the lack of genuine progress on civil rights.

Selma shows that although the Civil Rights Act of 1964 legally desegregated the South, discrimination was still rampant in certain areas, making it very difficult for blacks to register to vote. Oprah Winfrey, who was a producer on the film, plays a part of an elderly woman rejected time and again whilst trying to sign up and register. (Oprah did all she could to help this film get made, but annoying she pops up or is focused upon every few minutes, clearly due to who she is, which is distracting). In 1965, the city of Selma, Alabama became the battleground in the fight for justice where the Selma to Montgomery voting rights marches changed history. Despite violent opposition, MLK (played by British born Nigerian actor David Oyelowo) and his followers pressed forward on an epic march from Selma to Montgomery, and their hardship resulted in President Lyndon Johnson signing the Voting Rights Act of 1965. 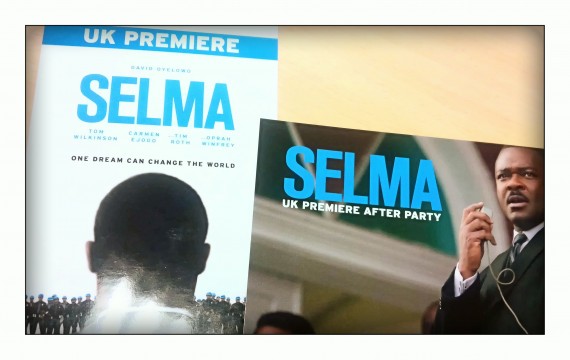 Selma’s UK premiere date was timely and topical. This film is relevant to today’s audiences for a few reasons, and the irony of watching it on January 27th 2015 was not lost on me.

* It was the same day as the 70-year anniversary of Auschwitz. A reminder that suppression of a people is not just a past historical paradigm, like the VHS tape. It still exists. People are being slaughtered in parts of the world, like Nigeria regularly, and the western media seem not to notice.

* It was exactly 50 years ago in 1965, since the USA granted African Americans the right to vote.

* It was exactly 100 days until the UK elections where yet again the non-voters add to the farce. In 2010 15.9 million people didn’t vote. That’s more than every single political party.

* MLK’s comments reverberate eerily today, when police again can kill unarmed black men and face no legal punishment, as shown by the murder of Michael Brown that tore the American town of Ferguson apart, just this past year.

*It was just after Martin Luther King Jr. holiday weekend in the USA (The memorial holiday that Americans celebrate with extra shopping and skiing). Also, now that we’ve picked up other annual American traditions like Black Friday its only a matter of time until Thanksgiving and MLK weekend is ‘a thing’ here too.
* It’s the same week that actor benedict Cumberbatch apologised, and said he was “devastated to have caused offence”, after using the ‘’coloured’’ word to refer to black actors, on a US TV show ,whilst trying to draw attention to the lack of opportunity for black actors. Selma’s lead man David Oyelowo has defended him stating, “I think it’s ridiculous, when you look at what he was actually saying it’s clear that he’s a huge supporter of black performers. I reached out to him in support and said I think it’s ridiculous, but we’re talking about diversity again and that’s because there isn’t enough of it.”

During the film, I kept wondering when MLK, would recite those famous ‘I have a dream’ lyrics. But alas he never does onscreen. I then found out that this was due to the fact that MLK’s bickering children did not give the film permission to quote their father’s speeches, and in the past had charged around £500,000 for his words to be inscribed into a statue on Americas National Mall. Then I was even more impressed with the clever way the film got away with this.

The film also touches very briefly on the differences in relation ship between MLK and Malcolm X, both religious black activists who differed at one point when it came to the use of aggression and peace. Selma shows that MLK is a believer in a peaceful protest-until peaceful doesn’t work and he’s reduced to media headline grabbing antics that led to black Americans version of bloody Sunday.

In Selma, It was at times hard to watch innocent people young and elderly, clubbed to within an inch of their lives or being killed. However these scenes weren’t the focus of the movie and the scenes were not gratuitous.
While the landmark 1964 Civil Rights Act had legally desegregated the South, towns like Selma remained very dangerous places to be a black man or woman, with Jim Crow discrimination still in effect, especially with regard to the contentious subject of voter registration. I watched the film and felt exasperated at the fact that it’s still dangerous to be a black man in America and many other parts of the world today.

Powerfully directed by former publicist Ava DuVernay, now the first African American woman ever nominated for the Best Director Oscar, Ava managed to make this film on a budget of around £13million, and managed a huge cast with dozens of speaking roles and hundreds of extras. At the premiere she took to the stage before the film began, to plead with the audience to help draw attention to the film ‘’ If we don’t build a mainstream audience for films like this, they won’t be made. Help us push this far and wide!’’ 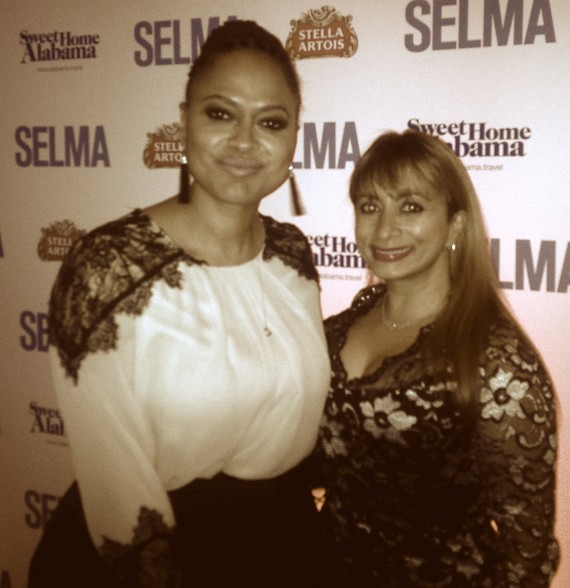 Born in Oxford, England, to Nigerian parents, David Oyelowo is graceful and majestic as he is fiery and pensive, playingthe lead role of Martin Luther King. Oyelowo said he felt a cosmic connection to the film way ahead of being cast in it. “Soon after my wife and I moved to this country, I was taught from above that I would play this role. On the 24th of July 2007. I couldn’t believe it, so I wrote it down — that’s how I know the date,” he said. “The director at the time didn’t agree with that higher power. And a process of my birth, my experiences, my faith, time and these incredible people led me to this moment.” 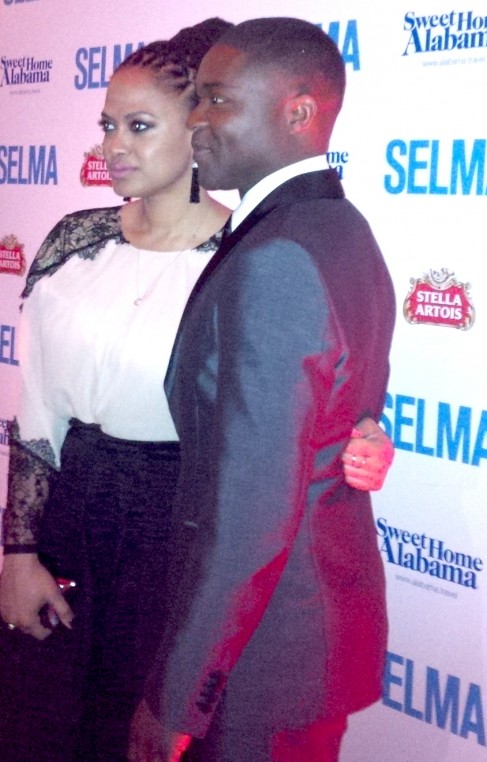 THE DREAM TEAM- DIRECTOR AVA AND HER LEAD MAN DAVID STRIKE A POSE AT THE SELMA AFTERPARTY AT ONE MAYFAIR.

It’s poignant to think, that if MLK hadn’t been assassinated in 1968, just three years after the Selma marches, he would have been 86 this year and looking at a very changed, yet unchanged world. Would he have been pleased with the progression or disheartened by the lack of it? 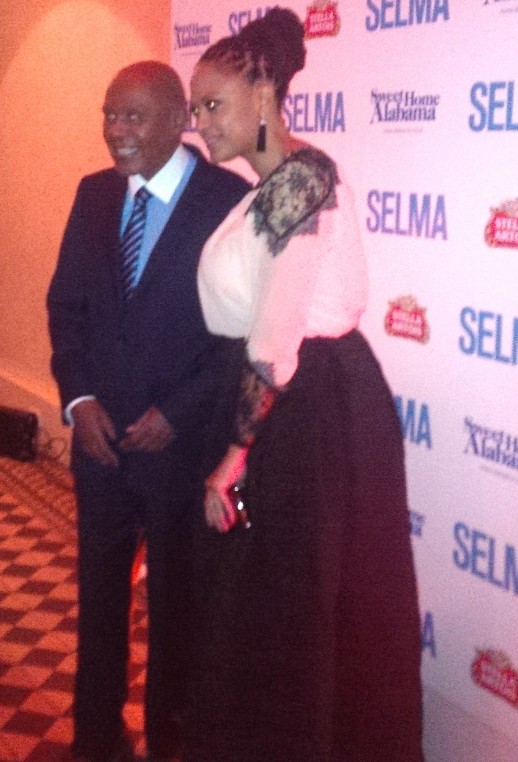 IT WAS HEART WARMING AND POIGNANT TO SEE BRITISH CIVIL RIGHTS CAMPAIGNER PAUL STEPHENSON POSE ALONGSIDE AVA AT THE SELMA AFTERPARTY.

It’s been a long time since we had significantly huge movies about black socio-politics like Steve Biko, Catch a fire, Rosewood and Boyz N the Hood. Yet In the past few years we’ve been bombarded with films about the stories of both black suppression and black accomplishment. Django Unchained, 12 Years a Slave, Mandela, The Help, The Butler, Get on the bus. What’s brought about the sudden onslaught? 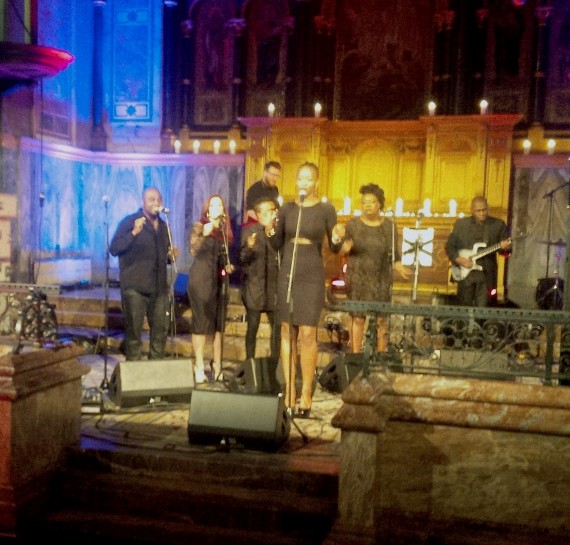 THE LONDON COMMUNITY GOSPEL CHOIR PERFORM THEIR SET WHICH INCLUDED THE OSCAR-NOMINATED TRACK ‘GLORY’AT THE AFTER PARTY FOR SELMA’S UK PREMIERE.

All these films have happy, victorious endings, but that’s Hollywood and hardly reality. Films like this should’ve been made years ago and shown to us in school history lessons. I for one, would’ve had a very different take on the world. Today’s news shows us that we’re practically right back to that same civil rights era, with Police Brutality and murders of unarmed men going unprosecuted. We have come so far and yet still have so far to go. 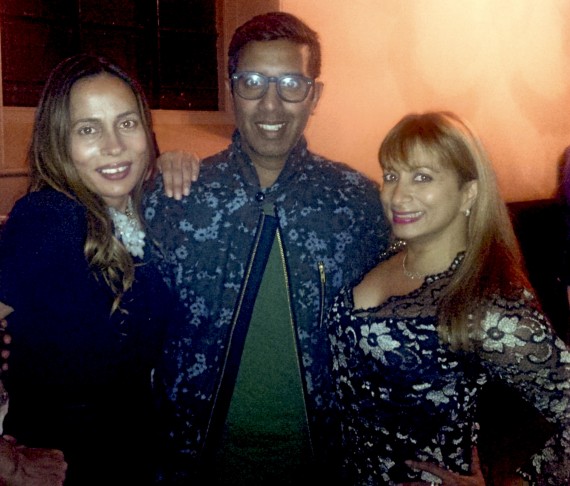 Hopefully when I’m an OAP, the films that are made about the BAME community worldwide, will be stories of adventure and narrative that’s not focused on oppression. Speaking of human upon human brutality, did I mention Nigeria?

Watch this film when it comes out on February 6. It has multiple Golden Globe and Oscar nominations. If you were in two minds about voting in the upcoming UK election, or (shock, horror!), have never voted, this will change your mind.