Nadia Rose has had a whirlwind past couple of years with live performances, awards and touring.
She’s also just completed a European tour (taking in Spain, Belgium, Greece, France) as well as New Zealand over the New Year!
She’s performed at Festivals all over the country and internationally this year. Hip-hop is now accepted and more mainstream than it’s ever been and Nadia clearly loves performing live. 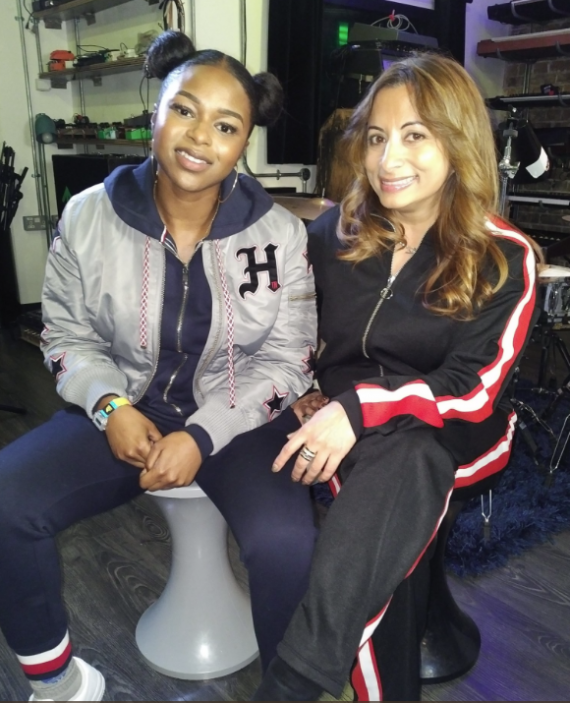 She’s done so many shows this past couple of years… Soundskool, MOBOs. Wireless, Afropunk and more. As well as all of that, she’s been nominated for and won awards….MOBOs / BBC sound of 2017.

This Croydonite has a really very distinctive voice. Her early musical inspirations included Eminem, Missy and Ludacris who have all clearly had an impact on her sound.

The nineties hip-hop influence is strong in both her sound and visuals- and also her trademark afropuffs hair style…is it inspired by hip hop legend Lady of Rage or Star Wars Princess Leia? Apparently neither- it was just a hairstyle her mum liked to put a young Nadia in.

Nadia’s parents and family background is both Caribbean and African…(Jamaican dad/Ghanaian mum). That hybrid of music – afrobeats energy – seems to be the next one to takeover mainstream charts -there is a cultural pride in the music scene that’s very strong, and cultural pride has had an impact on her sound.

Nadia also has a little bit of a showbiz background, the BRITs school on Saturdays , and she studied Music and Music Management at university. She juggled working in a south London betting shop, whilst attending the BRITs school, where she used racehorse names for inspirational lyrics, which she scribbled down on betting slips.

She’s one of the lucky ones, as there have been mass cuts to education and arts for young people in recent years, meaning that young people from working class backgrounds across the UK haven’t enough of an opportunity to engage with the arts.

There are quite a few big names like Krept/Konan/Stormzy/Section Boyz and more that have come from her locality. When asked what is it about the social conditions in south London’s that makes it bold, loud and unapologetic she states that they didn’t have much and were always under pressure to prove their worth.

Nadia’s album is titled Highly Flammable (13 January 2017), and is full of fiery explosive subject matters. She’s not concerned about whether speaking her mind gets her in trouble. Nadia’s music videos celebrate London…filmed at a market in Croydon (skwod), south London train stations (station), and more, its clearly important she reps her endz. Her songs also contain a lot of messages about female empowerment (Tight up) ….she reveals to me that in her experience there has been pressure to conform to a mainstream stereotype image of what a female rapper is being told to ‘‘Sexy it up’’ by her label!

The news recently has been dominated, by stories of sexual abuses in Hollywood, and most recently female musicians have also spoken out, after a new report revealed that rape and sexual abuse are “endemic”, within the music industry. Nadia admits that she is aware of these things going on, and that young women in music are not supported enough.

We agree that although females are finally finding their voices to speak out in the era of Weinstein, its also men in power in the music industry who need to be educated.

There’s been a lot of talk about the UK rap/grime scene being like an old boys club and whether the males engage with the females in the scene? Nadia says the females are coming through with or without support. It’s their time.

Hip-hop has always broken away from the mainstream. Many of its British stars don’t even have major label deals. They did it by themselves. This month the word ‘’youthquake’’ was added to the dictionary, meaning young people leading movements of change.

Another area where young people have rocked the boat this year has been politics, people talked about music stars like Nadia Rose engaging her fans. They called it the #grimeVote, how important is it that musicians speak out? Nadia says she has always voted. It was important in her family and that they always encouraged political discourse at social functions.

Having publicly urged her Twitter followers to register to vote, she feels that the youthquake went well. Her generation become the most newly politicised generation for years. She publicly supported Labour and said, “People who didn’t care about elections went out and thought they could be heard-But just because the election is over doesn’t mean it’s finished. I’ll do anything that furthers the Labour cause’’. What about labour gets her vote? She likes Jeremy Coryns spirit. He doesn’t always do things by the book and has rocked the boat.

In fact Nadia famously bumped into Jeremy Corbyn’s sons at a festival, had a chat about politics and swapped numbers with one that caught her eye and has made clear to them she is up for supported their dad if and when the time should come.

Nadia’s the girl you wanna hang out with. She engages on social media and requests book recommendations from her social media followers. Her twitter handle states that ‘’ a true musician is either dead or insane. ’’. She explains that being a musician for a career is a tough ride. She gives examples of the greats like Michael, Prince and Whitney no longer being with us and that a music stars life brings with it much vulnerability and that mental health is a big issue many wont discuss but that she is aware that many live the life of a star ‘’but then go back to their mansions, alone and depressed’’.

In 2018 Nadia Rose promises to take over more of the world. She’s already done Europe and Australia. Watch out, you’re next!