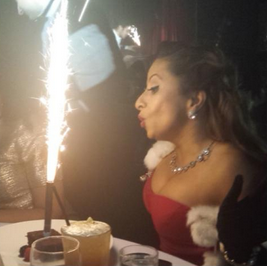 Life is a cabaret my friends, so this weekend just gone I decided to celebrate my birthday, by gathering my nearest and dearest for a small group dinner and burlesque adventure, at Proud Cabaret in the city. 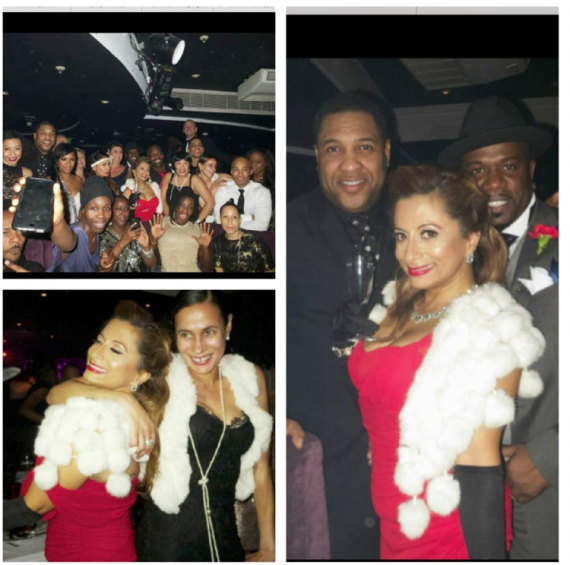 As you can imagine, the ladies were intrigued and my male friends? Well, they didn’t take much persuading to eat, whilst feasting their eyes on semi naked ladies twirling their nipple tassels with wild abandon and call it an artistic evening. 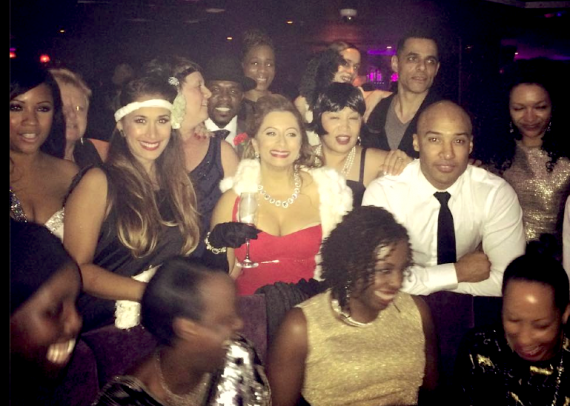 My circle of friends knows me for uniting them annually for my earth day, with a number of novelty celebrations over the years. So far we’ve had pyjama parties in my THE WORD days, underwear parties (in our youth when all was skinny and pert), geisha girls and pimps (where superstars Usher, Joe, Lennox Lewis, Damage and more partied), Motown (where everyone who’s anyone in #TeamUK got very sweaty all night), eighties old skool hip-hop (ditto!), black and white rat pack karaoke and more. 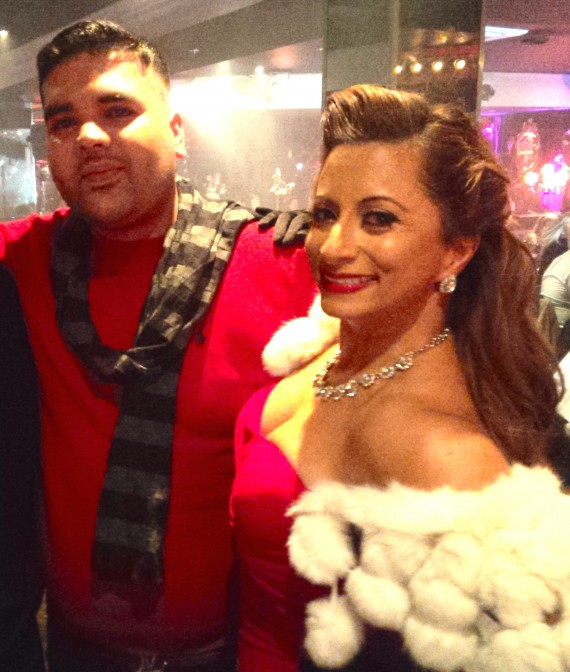 I came about the idea of burlesque, after my London360 reporter Ellie Holland made a TV report about feminism and the burlesque movement. 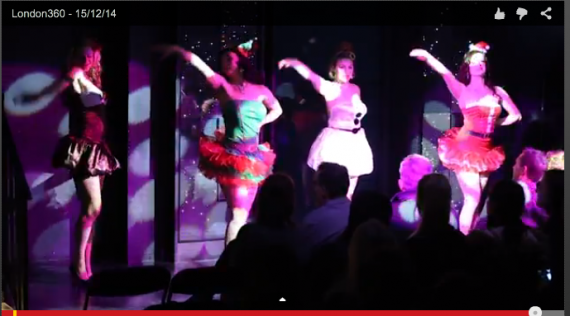 It looked classy and fun and not cheap and sexist, as I’d imagined. 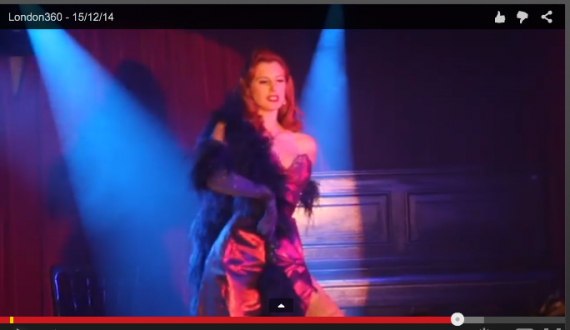 A quick e mail to 40 mates later and we were all dressed in 1920’s burlesque and glam Hollywood gear, and Charleston-ed our way down three flights of stairs in the city to an underground, smoky jazz club style venue. 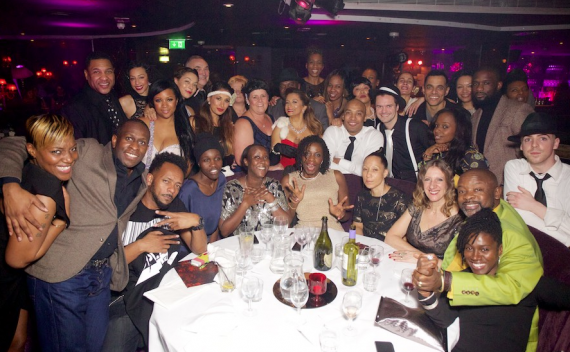 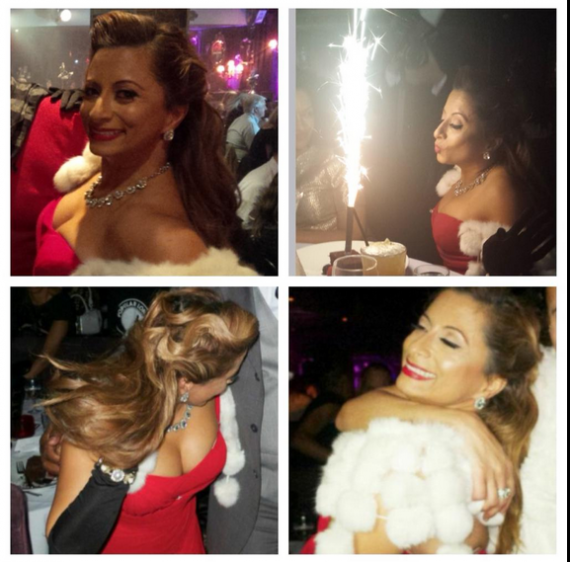 The venue is a secret hidden 1920’s speakeasy style lounge. All plush red velvet seating, every shade of lilac décor with gold trim and waitresses wearing nothing but basque’s, stockings and corsets, we were immediately whisked into another world with cocktails thrust into our excited fingers, with no phone signal or wireless for a whole evening of fun and frolics. 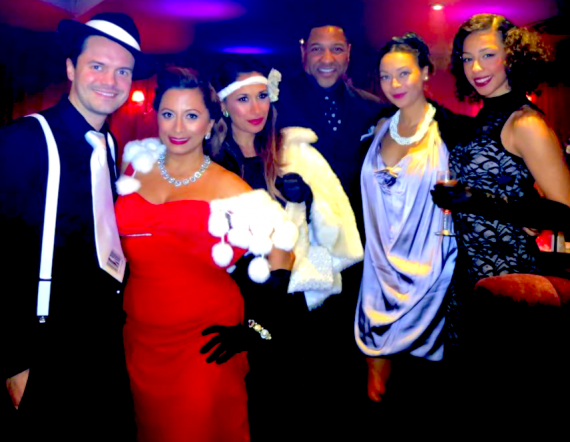 Our personal waiter / maitre’ d for the night was a very polite, helpful chap called Valerio, who showed us into our VIP area. 40 of us were split between five separate booths. We were told that some seated 10 guests, but honestly eight was tight. So much so that when pop stars Naughty Boy, Emeli Sande and Zayn from One Direction arrived fashionably late, all the seats were taken, so they went to the bar, bought me a bottle of Dom P, drank a glass to toast and then politely scooted back to their studio session. 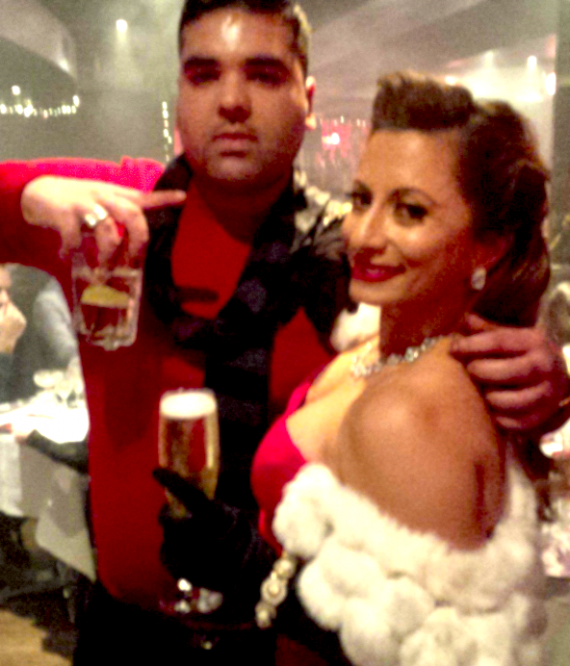 All the guests had really made an effort to follow the 1920’s theme including actress and singer Preeya Kalidas and Celena Cherry-lead singer from the Honeyz, both brought their male guests who looked like original spat wearing jazz dancers. 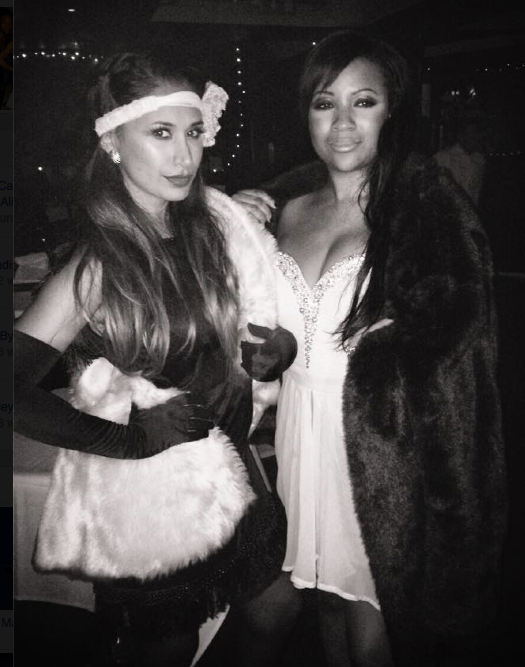 PREEYA AND CELENA WORK IT. 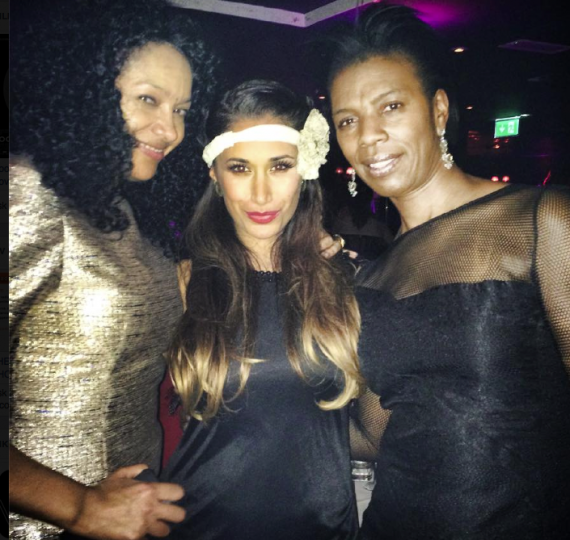 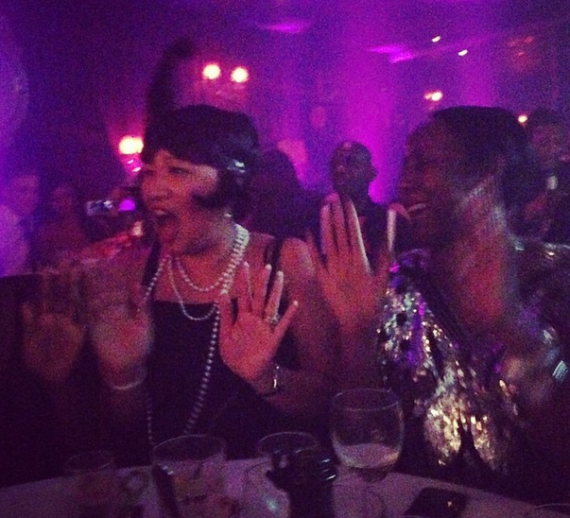 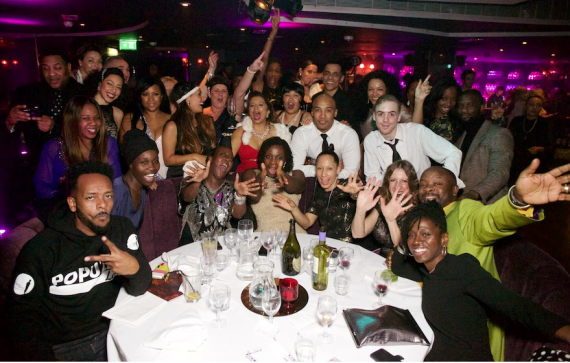 Dinner we were promised was ‘the best food’ in the form of a three-course meal, which each guest had already pre-ordered via e-mail as instructed the week before. Alas, two days beforehand we were apologetically informed that the wrong menu had been sent out and would we mind choosing again. No, we didn’t mind. So on the day, when informed by Valerio that he would have to take each guests orders AGAIN in person, it was all confused.com. Some of the food orders weren’t correct and two guests had uncooked through chicken satay’s brought to them! Eventually though things came through. The food’s not the best, with dishes with akin to a lonely, small piece of fish with no accompaniments and #sataygate, but that aside, the whole nights experience was on the whole, much fun.

The very politically incorrect show narrator and guide was a cross between The Joker and Julian Clary and very fast, cutting and as expected deliciously vulgar. 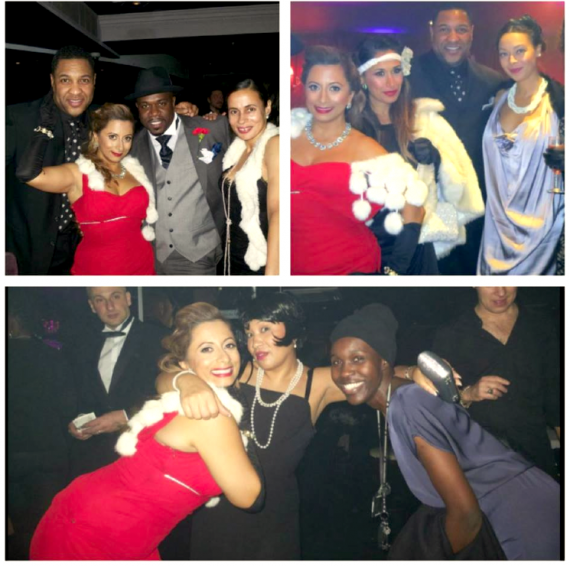 The show happened simultaneously to the dinner courses being served. To begin with we had a very happy, smiley, seductive dancer with giant feathered fans doing her Dita Von Teese thing before ending up in just a sequined thong and twirling nipple tassles. She was followed by a more serious, intense, tattooed lithe body that jerked and danced exotically and was very mesmerizing. 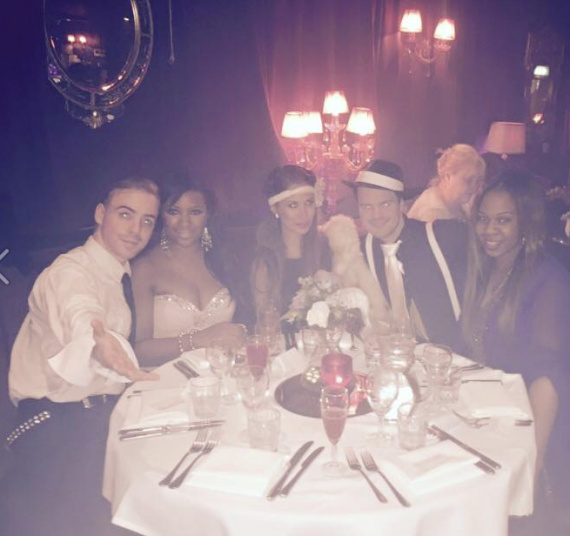 Halfway through dinner I was asked to go upstairs, as there was a guest that was at the door. I knew something was up when photographer extraordinaire Paul H accompanied me too. It was film producer Pikki Fearon (who had been involved in a motorbike accident 11 years ago and wheelchair bound ever since), with two bottles of champagne. He had come to surprise me and thank me for my help in helping him secure 450,000 tweets last week, which enabled funders to donate a bionic walking machine-that usually costs £100k – to him. He had only been required to generate 50,000 tweets so this was an incredible feat, and really showed how social media can be used to do good and change peoples lives. 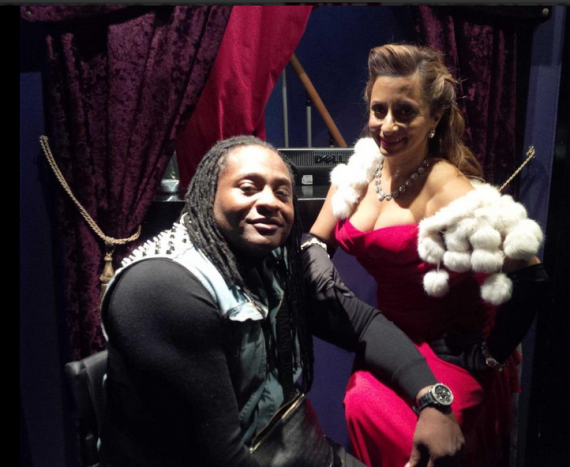 After dinner, the dj threw on classic and current party tracks and we were all dancing on podiums and misbehaving as encouraged. This venue could be really, uber cool but still lacks tiny management touches that could bring it better business and bigger brand profile. Check it out though, its a riot and an unforgetable night out. 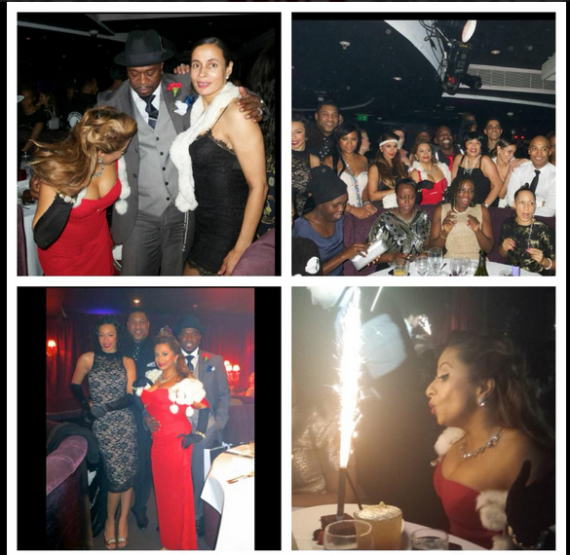