Kidzania is quite simply one of the best paid for educational theme parks for kids I’ve ever experienced. (I suggested we take a friend’s 8-year-old nephew there whilst he was in town from NYC). 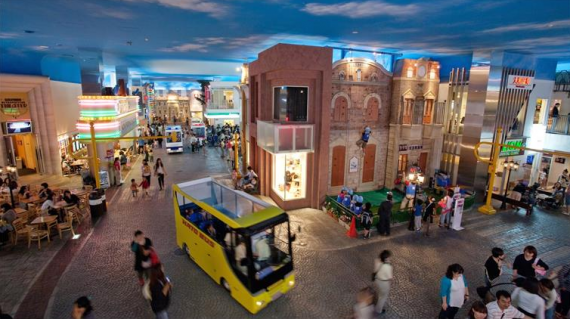 With locations globally, the London one resides in the roof of Westfield London in White City and is a genius concept.

Visually it’s like a mini Vegas stylewise. With no windows or clocks you can forget the outside world and focus on this mini city for kids.

Even on entrance you are ushered into a red carpeted airport style gate and through “immigration” to arrive up escalators to a new young world. 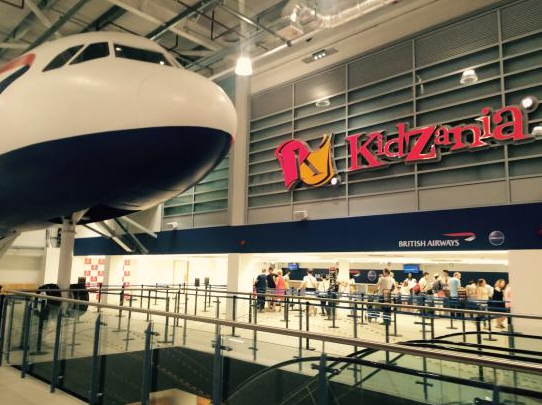 Parents can accompany their kids or leave them there for a maximum of four hours. There are no security issues as each young person is tagged on entry so they are unable to leave without their parent or guardian.

Each kid is handed a fistful of kidzo’s cash. They will able to earn more in some jobs (like window cleaning) and pay for others (like a TV preseneters stint). 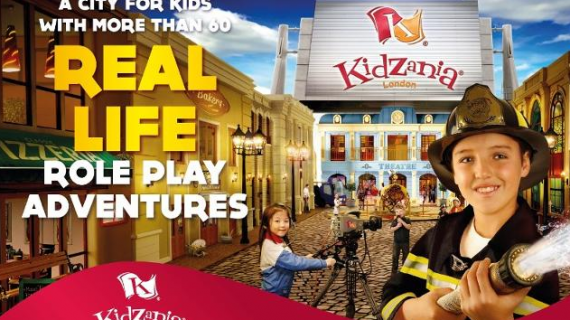 The city consists of every possible business type you can think of. Mini pop-up versions of a fire station, police station and hospital where kids can try a taster session of what it might be like to actually work there, why they are important and get hands-on with specific skills. 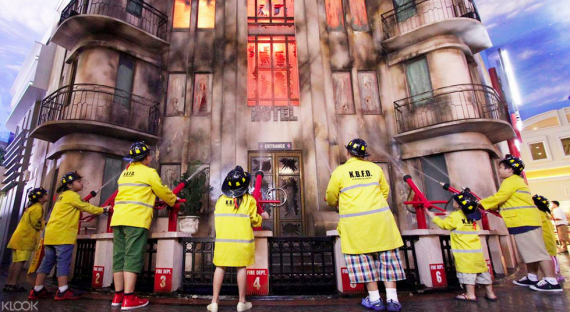 You see the firemen donning fire suits and rushing to an emergency. 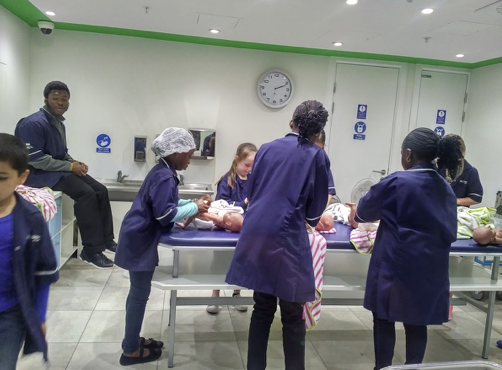 Nurses are taught how to manage new born babies and police are catching criminals and keeping the city safe. 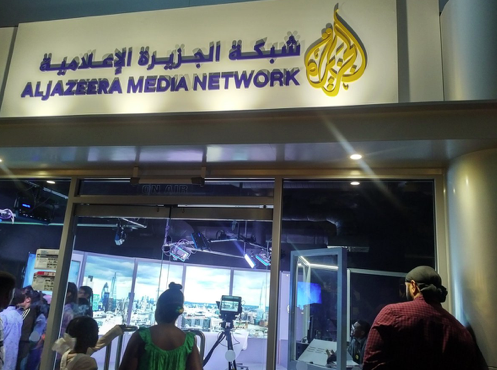 The fascinating thing is the canny marketing by your average high street brand. The chocolate factory is sponsored and led by Cadbury. The TV studio by Al Jazeera. The newspaper print press by The Metro. 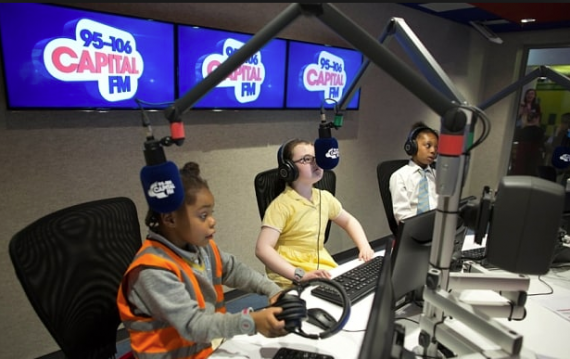 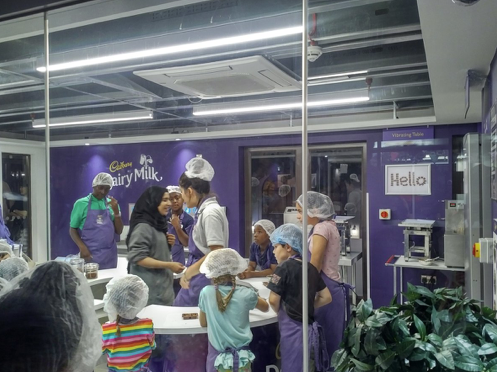 There are air conditioning technicians crawling through ceiling vents and absailing kids dangling from high walls.

Interestingly, when we took my friends nephew was that initially he wasn’t keen to try window cleaning, didn’t mind the bank, loved the animation. However he quickly changed his mind on the menial window cleaning when he learnt how much extra kidzo’s cash he could make. 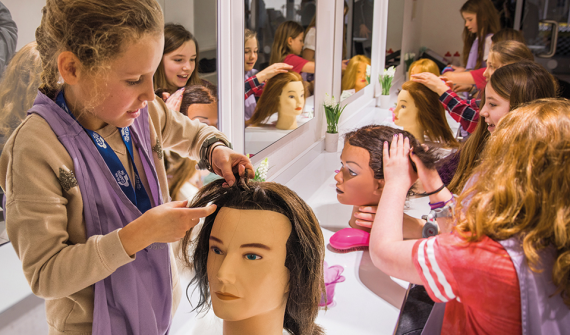 Who cares about fake cash you ask? Well the brill thing is, at the end of the kidzania experience they can spend their fake cash on actual real stuff in the shop. A great life lesson. Work hard and buy what you like. 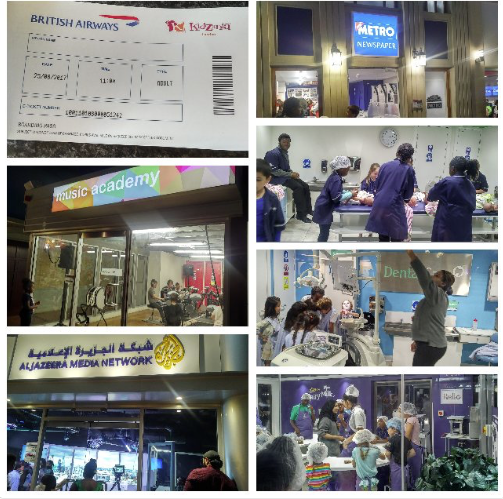 Each session takes between 20-30 minutes and it’s a good idea to get there really early as it can get very busy in the afternoon. 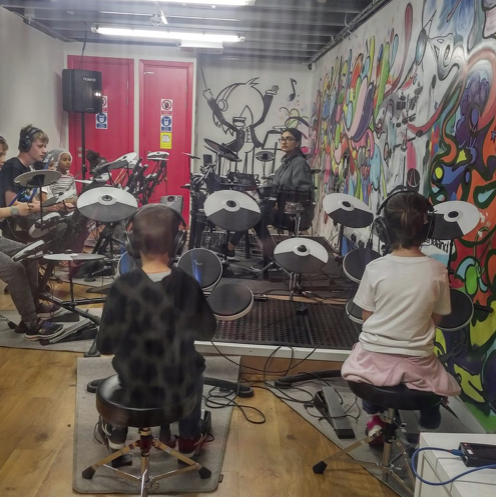 Each session saw enthusiastic kids engaging with practical tasks. The jealousy factor was great in me. Adults aren’t able to join in but we are able to act as extras. For example on the football pitch we can sit in the stands and cheer. 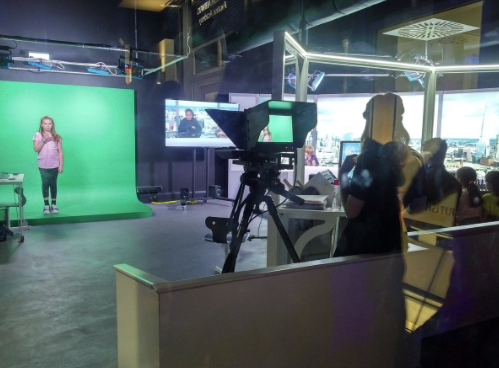 A truly fascinating way that young people aged 4-14 can experience a job, try lots of industries and get that employment gene kicking in early.
All kids should have to do this before actually being let loose in real-time work experience situations.

I can’t recommend it enough. I hear they occasionally do adult evenings with a glass of wine. I’ve signed up.

Here are my friends thoughts on it;

Six weeks school holiday is a loooong time to keep a child entertained. When my little person asked if he could hang out with Auntie Jasmine again it’s because he knows hanging out with Auntie Jas is always FUN.
I didn’t really know what KIDZANIA was when she suggested I take my favourite 8 year old there. Tucked away an a part of Westfield that I didn’t even know existed, it really was like stepping into another world. A world where where children learn about different occupations experientially – but that doesn’t really do this gem of an idea any justice. As we entered the check in zone, it was clear a lot of thought had gone into the experience. The boarding pass-like tickets and airport style departure lounge with the equally authentic long line to the check in desk built the excitement of travelling to a magical destination. My little man was gifted 50 kidzos to spend (currency not unlike Monopoly money) before we walked through the door an into a cute mini-world where children indeed came first. It’s also reassuringly safe as all children are fitted with an electronic tag meaning if they lose you in the way they usually do when they lose their minds with excitement, they can be easily found. It also means they can’t leave Kidzania without the adult they arrived with – so you can lose a kid without actually losing them!
It’s structured as a mini city with a supermarket, hospital, fire station, bank, university, dentist and sports stadium amongst the attractions. Children are paid for jobs and they can either use that currency to pay for activities or save it in the bank – ready to withdraw for a later visit. Big brands too have seen the benefit – Al Jazeera is the local TV channel, BA teaches about being cabin crew and Cadbury has a chocolate kitchen and Pokemon has an animation suite. But despite the glamour of the H&M fashion studio or the excitement of being in the back of a fire engine, the job my nephew chose as his favourite was … the window cleaner .. because at 12 kidzos for 15mins, it paid the most! And herein lies one the best ways to teach children about money. You have to work to pay for the things you want, but rather than being told, they experienced it for themselves. If my little one wanted to have a drumming lesson that cost 8kidzos, off he went to do a stint of window-cleaning to pay for it. Your time in Kidzania is limited to 4 hours which sounds like a long time, until you see the queues of up to 20mins for the most popular jobs which is like forever if you’re 8. Adults have to wait outside each attraction, so if jostling with parents taking pics through the window isn’t your thing there’s an adult zone tucked away on the upper level where you can take a moments break should you wish. There are tales from Kidzanias around the world that children have pursued careers after learning about it in this mini-city. For my little one, whilst he hasn’t abandoned his desire to be a marine biologist, for a career as window cleaner, as he excitedly recounted his day with his Dad, it was clear that that this was by far the highlight of his summer, earning Auntie Jas ‘Cool Auntie’ status. Result!