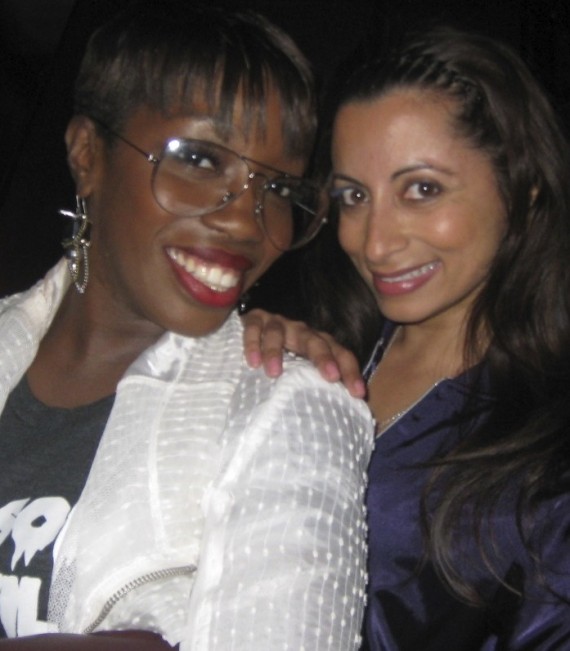 JASMINE WITH ESTELLE- A WOMAN THAT WOULDN’T BE HELD BACK BY INDUSTRY BULLSHIT.
2 years ago I was on twitter asking where all the females in our entertainment industry were as the men had taken over. Now don’t get me wrong-we all long a bit of male empowerment but after months and months of seeing acts like Tinie, Tinchy, Dizzee, Chipmunk, Lethal B, Sway and others in the UK music charts and on our TV screens and radios I had to wonder where all the ladies were.
Seems I spoke not soon enough as within the last year record labels and artist managers have been signing up the females as if the last woman on earth was about to ovulate and we had to save the egg for the continuation of mankind! 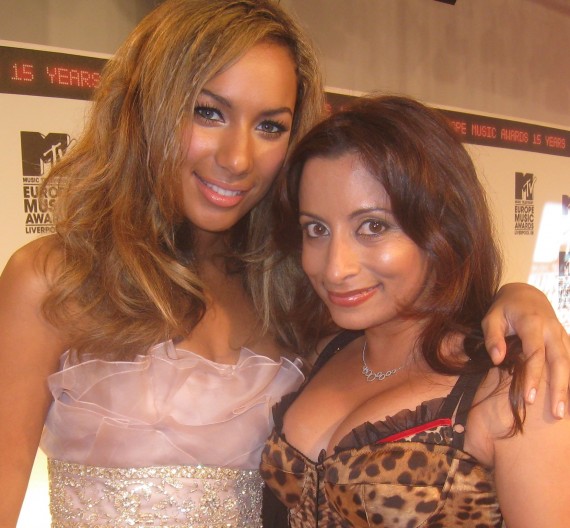 JASMINE WITH LEONA- A LADY THATS BEEN PUSHING HARD ON THE SCENE WELL BEFORE X FACTOR!
With the hard fight that grafters like Estelle and Leona Lewis have had over the last few years and finally making it we saw the females start to come through thick and fast for this decade. And believe me these ladies slogged for years on the music underground scene at talent shows and more!
Estelle, who is in town with her new tour and music next month, was at every underground hiphop jam on the mic competing with the guys years ago. she was signed and let go but fought through and made her mark bigger in the States. shes ambitious- and talented- a great role model in an industry that had traditionally spurned darker skinned females.
Leona’s brother Bradley used to be one of my editors at MTV, he often mentioned his lil sister entering talent shows and practising her craft hard at home singing countless Mariah classics to sharpen her vocal instrument.
I recall the same issues when female acts like All Saints, Spice Girls, the Honeyz, Cleopatra, Truce, Mis-Teeq and more were trying to make it years ago. None of us know who will make it. Some folk lay money on acts making it whilst others that were relegated to the pop chart bin ended up being superstars. When the roc told me about Tierra Marie being the new roc princess they had Rihanna tag along like the understudy- 7 years down Riri put in the work and she’s here to stay. For now. Honestly, if a female music star has stood the test of time and sold as many records as she is gossiped about in the press she is made of tough winning material. 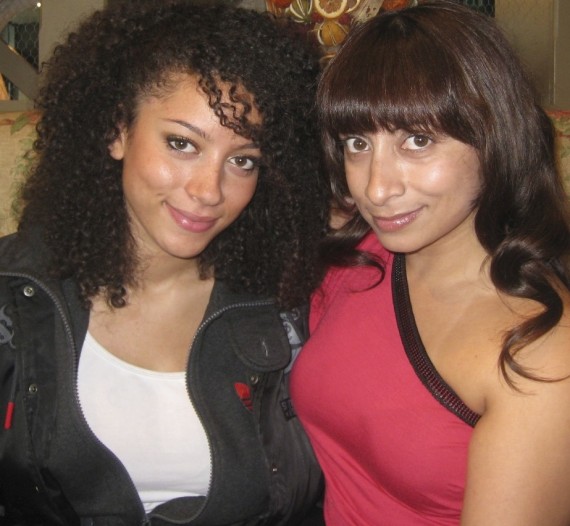 JASMINE WITH BRATT- A YOUNG LADY THATS FINALLY BEEN SIGNED AFTER PROVING HERSELF FOR A WHILE!
So it’s always interesting to see this happen in cycles. In the latest resurgence of the female music star race to the finish all my manager friends started signing both female soloists and groups. We saw talent like Miss Bratt, Princess Nyah, Cleo Sol, Delilah, Ruby Goe and others start to make their presence known. Boy band members from JLS (Ortise) were signing girl groups (Vida), former UK rappers ( Jean Paul Esq) was managing girl band Rogue, song writer Carla Marie was managing female trio RD and had them signed to Polydor. Next trio stooshe came along and have signed to Warner Music. Just this fortnight Dominique Young Unique signed a global deal with Sony music. Oh-and where’s Yasmin?
Often females get signed, become divas, don’t have the right synergy with their teams and record labels that thrive on all their insecurities and then are quickly dropped again. Female acts cost more money. they require hair and make up at all times as well as a wardrobe fit for a princess. This alone can be the make or break factor as to whether a record company head decides if someone is in the ‘’hot’’ or ‘’drop’’ category. 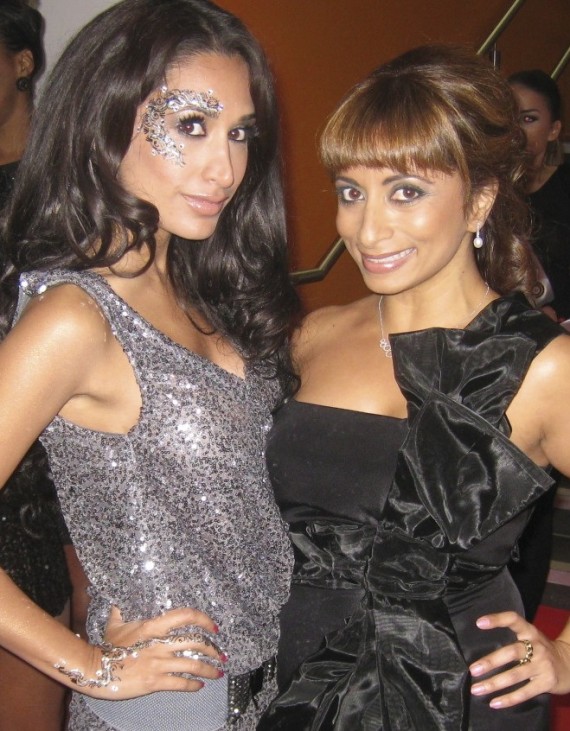 JASMINE WITH PREEYA-A LADY THAT KEEPS PUSHING FOR EVERY ANSPECT OF HER DOUBLE PRONGED ACTING AND MUSIC CAREER- A FIGHTER WITH PERSEVERENCE!
Also women in music face the same barriers that professional women in any career face-the biological time clock and its affect on our lives.
Ms Dynamite came, saw, conquered and then left to be a mother. It’s tough to comeback when you’ve been off the scene for so long.
My mate writer Hattie Collins did a feature in the guardian a couple of years ago about females in the UK music industry. She noted ‘’The last major British female rap outfit to make it big was Cookie Crew, the group that scored a top 10 hit with Rok Da House in 1988 and even achieved the impossible: success in the US. But Debbie Pryce, one half of the band, says British women can make it in hip-hop if they want it enough. “Challenges? What challenges?” she says. “We reigned supreme. Nothing deterred us. It wasn’t about being held back because we were girls. If you want to make it [in hip-hop], you have to love it and understand its true culture.”
And here is where I fear the buck stops. So many young females in the scene today don’t give us the impression they are musicians in the real sense of the word. They like to dress up and be sexy like Tulisa N -Duz, but do you get the impression they know the first thing about how to read music, play a musical instrument, how to structure a song without a producer or songwriter? Not often.
When I hang out with male new acts they talk to me about their music and desires for their music to affect social change. Many females talk to me about their fashion or hair issues. I know both are equally talented but the ladies don’t do themselves any favours by highlighting stereotypical images that they are already struggling to lose. It’s even worse when musicians are in a mixed band. Whether I’ve worked with the Fugees or N-Dubz its always the men that are ready at their call time and the lone females that have loads of crew waiting for hours as they get their hair and make up right. Why don’t they factor in their time deadlines?
Really it comes down to whether they have the X Factor. Do they light up a room with their presence or are they the wallflower? Are they genuinely amazing artists like Amy and Adele or are they playing up to the record labels pressure of being ‘’quirky’’ like Jessie J.
I attend numerous music industry functions and all the young female acts still with something to prove are always trying to outdo each other in the sexy stakes. On the other hand females with nothing to prove roll in wearing their jeans and tee’s and still look hot. Sexy can only sell records for so long. When the time catches up with you where will you be? Ask yourself this question as a measure of your current status- If you have a public profile, can people immediately break into a chorus of your hit?. if not–then you have failed already. Start your career strong now. Work! 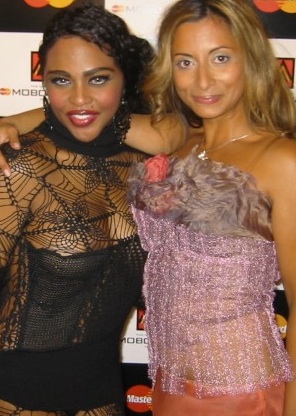 JASMINE WITH LIL KIM A TRUE DOUBLE THREAT!
It’s a very tough world for females in the industry. But the main understanding that will carry you to longevity and success is to do YOU. Alicia Keys was dropped many times before making it. I know acts that had thousands spent on grooming and developing them and then 2 years in they decided they didn’t really want it anymore!? Honestly it’s a crazy career to want but if you want it-BE GREAT at what you do. Lil Kim wasn’t just a sexy, vulgar, controversial rapper-she had verses, bars and flow to match. The fate card is very important in whether you will or won’t make it but hard work added to talent and luck will guarantee success. Ladies-may the force be with you!.