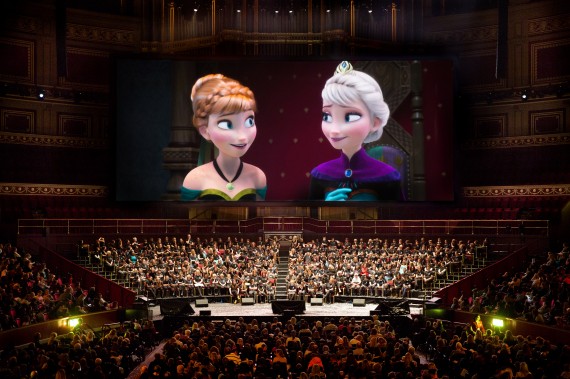 Who wouldn’t want to be a princess? They rule their world’s and wear pretty things, people fawn upon them 24-7 and life’s a total breeze.
As we grow older we may grow out of pink but the princess gene and attitude is ever present even if in teeny doses.

This week I attended what I thought was another one of the Royal Albert Hall’s many humungous-ly fun, interactive movie screenings, alongside music, choir, and orchestra moments. I was in for a shock.

On arrival, thousands of little girls were running around all excited and wide eyed, in their princess costumes and shrieking with delight. It felt like every family in the country, with little girls aged between three and thirteen, had descended on the venue, waving magic wands in their princess gowns. Adults were pointing and cooing at the best costumes and wigs. (They were learning early about being rewarded for looking pretty).
I knew the Disney movie Frozen was popular but not this popular. Googling once at home, I saw how very uninformed I was about talking snowmen, ice princesses and Prince Charming’s.

Frozen is the highest-grossing Disney film of all time, having made over $1 billion at the global box office. Critics and audiences are united in their praise for the film, which amongst its many accolades has won two Academy Awards for Best Animation and Best Original Song for ‘Let It Go’, as well as a BAFTA Award and a Golden Globe. From this month audiences are invited to become a part of the interactive show, joining in with all of the film’s original songs, including ‘Let It Go’, the chart-topping song that has so far received over 500 million YouTube views!

Online there are viral videos that pair Frozen with Breaking Bad, fan made videos, spoofs, viral videos of little girls in Belfast throwing strops in Frozen mode, and song parodies of every song in Frozen, mostly its big hit Let It Go.

The mini fans that couldn’t Let It Go’ had clearly watched the movie so many times, they didn’t miss a beat when it came to joining in en masse and singing the songs throughout the film which was shown in stunning high-definition. The lyrics were projected on the screen – with a bouncing snowflake allowing us to join in with the film’s stars Kristen Bell, Idina Menzel, Josh Gad and Jonathan Groff, and sing-along. Even though the bouncing snowflake jumped along each word to remind us when to take our cue, the audience clearly didn’t need it. 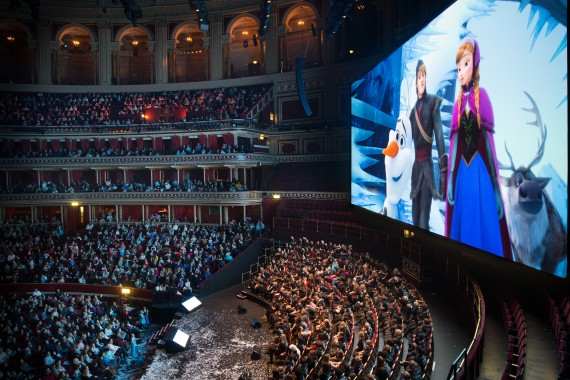 The Frozen soundtrack was the No 1 album in the US for nine weeks – to put this in perspective Beyoncé only managed three. The movie’s big song “Let It go” won the award for Best Original Song at the 86th Academy Awards, beating U2’s “Ordinary Love,” Pharrell’s “Happy” and Karen O’s “The Moon Song, and the two five year olds sitting behind me singing at the top of their little voices proudly, were testament to the delirium the song evokes from many. The fans hysteria, buoyancy and sparkly high spirits were really infectious and had us grinning in bewilderment from start to finish.

Pretty early into the award-winning animated comedy adventure, I could see why the girls were enraptured. Its characters and song lines have a massive don’t give a f*&* attitude.

Saucer eyed, teeny – waisted, blinged- out, ball-gowned Frozen lead- ladies Elsa and Anna are all the rage now, and clever Disney has embraced the feminist theme that older female pop stars have been pushing this past few years with a vengeance. Teen fan army’s may have Rihanna and Beyonce, but toddlers all stan for Elsa and Anna even though they look totally unrealistic!

Just this week a new ‘normal Barbie’ has been launched by graphic designer-turned-toy-maker Nickolay Lamm, who has created the Lammily doll — what the Barbie would look like if she actually had the measurements of an average 19-year-old woman’s body (based on CDC data). And brown hair. (She also comes with a sticker extension pack, complete with cellulite, freckles and acne.) When Nickolay Lamm presented a Pennsylvania class of second graders with his Barbie alternative, the reactions were healthy. “She looks like my sister!” “She kind of looks like my aunt Katie,” “She looks like a regular girl going to school.” “She’s not like other dolls… she looks real.”

That reality check didn’t prove to be a bad thing. When presented with a blonde and busty Barbie, the children said that they’d rather have the one who, if real, “would be able to stand.” (Barbie wouldn’t be able to lift her head fully if she were an actual human).

This would probably please Dr. Rebecca Hains, an expert on children’s media culture and the author of the book The Princess Problem. She says ‘Princess culture encourages unhealthy consumerism and saddles girls with noxious messages about their gender’. It’s true that Frozen still encourages pretty princess, except now they have major attitude!

Whilst Frozen was playing to whoops of delight from both children and adults, and the odd childish chortle and wolf whistle when there’s a line ‘’I want you to take me up the north mountain’’, I could feel the air rackling with mini feminist attitude. A whole arena full! Girls about to hit puberty were in their element!
Hans Christian Andersen gave me Cinderella, the Princess and the Pea and Sleeping Beauty, where the lead ladies were docile princesses saved and rescued by external forces- usually men. But Disney has brought the fairy-tale into modern day equality rights and pushed this with The Little Mermaid, Mulan, Aladdin, Pocahontas, Beauty and the Beast and now the gladiator of all princess movies, Frozen!

I could see whilst surrounded by toddlers fanatical about the characters, that the film has captured and bottled this new girl power attitude and its grown an army of billions of obsessed little girls across the globe. It appears that sisterhood is aggressively alive and well amongst the Barbie generation and I didn’t know it.
It’s a very empowering, kick-ass film for girls but it’s not just for the daintier sex. It’s also a very male film that little boys would love too with loads of action, snow monsters and slivers of horror.

Afterwards Jasper Hope, Chief Operating Officer at the Royal Albert Hall, told me: “Frozen’s captured the public imagination like few family films of recent decades and we are delighted to be presenting it at the Hall as a sing-along show. We know better than anyone that there’s nothing quite like 5,000 voices singing live to raise the roof – the Royal Albert Hall is the perfect venue for this unique event. With children under four admitted free, it’s the ideal show for everyone who has fallen in love with this movie – and refuses to let it go.” (See what he did there?)

With a new United Nations report out this week that states that a swell in the global population of young people has the potential to transform economies for better or worse and that the global population of young people between the ages of 10 and 24 has hit 1.8 billion, a historic high, this is the time to capture those young hearts, minds and voices. Frozen has done that.

My fellow staff members are now all revealing that they are panicking about sourcing the latest Frozen goodies for their lil princesses for Christmas. I have a suggestion…

Whether at a venue near you, or even better, keep it cheap and techy and host a sing-along party at home in front of your computer. A cultural, dressed up, all-empowering, toddler sing-along could be that once in a lifetime experience. 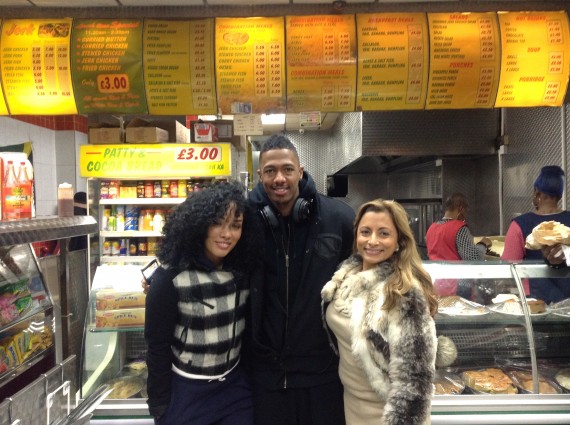 NICK CANNON WITH HIS DANCEHALL ARTIST KREESHA TURNER AT THE JERK CHICKEN SHOP IN SOUTH LONDON – KEEPING IT REALLY REAL!

Nick Cannon is in town this week shooting his Lifestyles of the rich and famous TV shows. On landing in London he and his team were peckish so we took them to our favourite South London Jerk Shop, which was pretty quiet on a Sunday night…until 10 minutes later when the hood communication system had informed all and in minutes the shop was full of fans ….all delighted to meet and take selfies with Nick and his new dancehall artist Kreesha Turner.
Check her out online and her new track with TOK!.