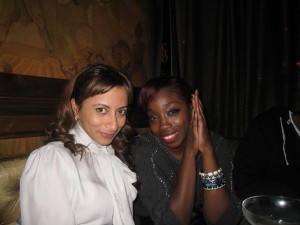 Happy New Year dear readers! Here we are again! Another January! Another chance to start a new year afresh with positively new beginnings…where will it lead for us all? Only time will tell! I write this from los scandalous otherwise known as LA. I’m relieved it’s sunny because when I flew out here in mid December it rained torrentially for 5 days. Worse than any Indian or Kenyan monsoon that I’ve ever experienced and much worse than a rainy day in London. La in the rain is so grey it’s hard to acknowledge you’re in the sunshine state! Doesn’t the song go? ‘’it never rains in southern California’’

My life is never calm and before even getting through immigration there was drama. The winter solstice, full moon and lunar eclipse on December 21st came early for me and I aged 10 years in 30 minutes.

My friend had filled in their ESTA form incorrectly so instead of the usual ‘’Welcome back to the USA’’ and a smile, we were hauled off to a side room where my mate was questioned alongside thugs, dodgy looking folk and other undesirables. Luckily after a lot of sweating – honestly I thought we were both going to be deported back to the UK-it was all cleared up and we were waved through. We had had visions of being put into orange prison overall jumpsuits and staying there for days as all UK airports were shut off by snow.

On arrival at my cousin Jani’s crib in the miracle mile area I plonked myself on the sofa and began preparing to unpack. I dragged my new suitcase towards me and colour drained from my face as I noted that whilst it was indeed the same colour and model as my new black case- but it had a label that stated it belonged to a ‘’Mister M Coleman from Northants ,UK’’ instead of Miss Dotiwala. Eek. This is the reason I have always cited for not wanting a black suitcase. Every other case is black. I felt sick with concern that I would be jazzie-no-clothes in a few days when we were going skiing, even worse I felt terribly embarrassed that poor Mr Coleman must be frantic with worry due to silly lil me scooping up his case from the baggage carousel. After the immigration drama however this felt like small fry. Cousin Jani bundled me into her ride, zoomed me back to the virgin desk where a porter informed me the desk was now closed but pointed out a virgin official outside that was on his way home. We sprinted out to the guy who looked at the case I was dragging-Mr Coleman’s- and said ‘’oh yes-I think I have your case in the office’’ and proceeded to take us to the nearby office, open up, take the Coleman case, swap it with mine (which I practically sank to my knees and kissed), and off we were- happy and relived. I love Virgin Atlantic. Honestly-they couldn’t be friendlier or more helpful. And I’ve been saying that for the past 20 years!

LA meanwhile was just pouring cats and dogs, day and night so regular activities like strolling along 3rd street in Santa Monica or chilling around Venice beach weren’t going to happen. Instead my international designer friend Adam Saaks scooped me up in his very LA trendy Prius and insisted he was taking us to see his surprise. As we drove down Melrose Ave Adam said ‘’look out the window’’ and there stood a huge very swish looking store called….Adam Saaks!. Adam dragged us inside and proceeded to load us up with free stylish goodies and of course cut a tee-shirt onto our bodies-that which he is famous for. We ended the day chowing down on sliders (mini-burgers to you Brits) and fries at the infamous 50’s all American Johnny Rockets diner. Then we settled back down at home to watch the ‘’Christmas in Washington’’ special that Mariah was singing in and felt extremely proud of her especially since she is heavily pregnant with those twins.

The next couple of days were spent in a frantic shopping whirlwind at the grove and the Beverly centre picking up last minute Christmas gifts before the UK’s finest Estelle pinged me to announce she was going to be in town the next day for a gig and we should do dinner. Never one to do things by half I suggested we invite a couple of friends. Boxer Audley Harrison, actor aml ameen, designer adam saaks, girl-about-town/jewellery designer Britney Gastenau, infamous L.A club promoter Shay, and my cousin Jani….dinner was at a very fashionable restaurant called Koi after which we popped into the infamous Chateau Marmont bar for more bellini cocktails before calling it a night. Estelle looked happy and fabulous with her newly tinted red hair and was on full entertainment mode as she had the table roaring with laughter at her anecdotes. Her next album sounds like it’s going to break some serious ground. 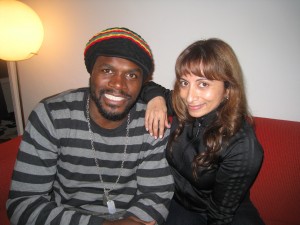 Audley shared a carrot cake and cuppa tea with me- typical Brits!. Instead of joining us for the whole evening Audley blew us out to….wait for it….go and play darts with his professional English dart players that live up in the Hollywood hills. Apparently he’s a very good aim with that left hand of his. So living out in la Audleys clearly more excited about throwing darts that punches these days. When he’s not doing that he told me he’s having fun replying to haters that cuss him on facebook. He gets a lot of satisfaction putting certain haters back in their places. I’ve known Audley for years, from the early days when he was wayward and spent time courtesy of her majesty’s service, when he was a nightclub security man and watched as he pulled himself up to Olympic fighter level and now he’s living the good life on the west coast with his beautiful wife and daughter. It’s an inspirational story. Hes happy regardless of the hate he gets. A true positive, spiritual thinker. I was laughing at the size of his feet. Hes a big guy but even I have never experienced size 18 feet! I could live in one of his shoes! But living in my own shoes is more than good enough for me as I recall my annual festive Christmas in Utah with Christmas family-all the juice on that next week! Happy New Year!