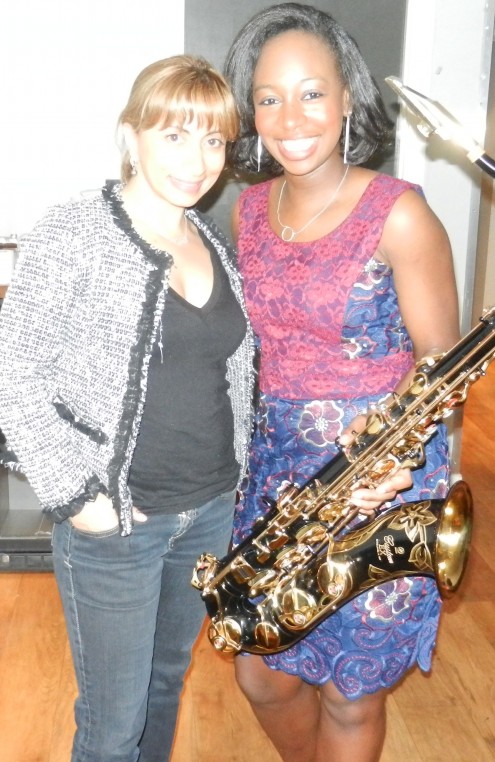 JASMINE WITH YOLANDA BROWN.
Another hectic fortnight in the diary of a media maven like myself!
I began it attending with my team at the BFI, the National film school graduation screening of films where one of my former CDN mentee’s Abigail Dankwa was showing her graduation work- The House: Beats and Tweets, a TV Entertainment MA film-and an amazing piece of content it was-so proud! Onwards and upwards to the whole graduating class

Next I took my current LONDON360 young news reporting team to ITV to meet a great TV man who has championed diversity in the industry for years- Robin Elias!

The whole team also attended the Uprise event at Channel 4 where 10 young Londoners from various youth corporations and youth organisations grilled the upcoming London Mayoral candidates on a panel in the presence of 250 audience members. more on that next week! 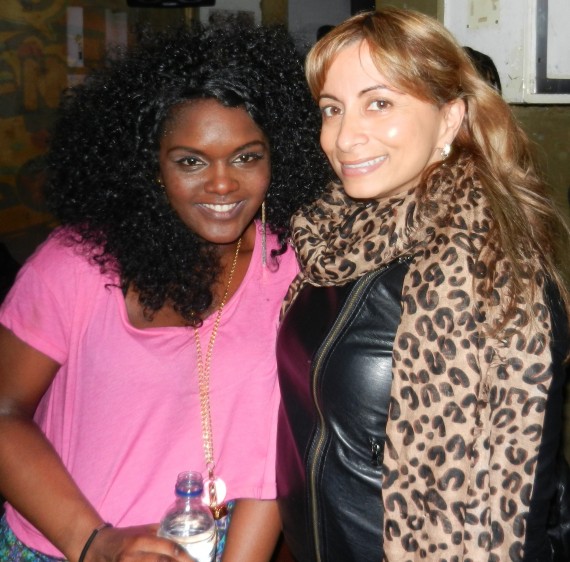 JASMINE WITH NEW GIRL TO LOOK OUT FOR-RUBY GOE!
Midweek all roads led to west London grimy club venue YoYo’s to see new female musician Ruby Goe perform a short set. Thursday nights at YoYo are famous for hosting new up and coming artists on the UK music scene and Ruby was worth making the late midweek trip out in the cold for. I had already heard a lot of buzz about the surrey-based lass with Nigerian roots. Ruby has had reviews in many of the mainstream press columns including the guardian and been described as the ‘’M.I.A with hooks and songs’’ so I had to go check her out. She was scheduled to hit the stage at 9.20pm, and shockingly she was! (Love a punctual act!). In the house were a number of record label heads including the late Amy Winehouse manager Raye Cosbert. She performed a few tracks- with the most Duracell powered energy I have seen in a long time. Her outfit was simple and real and consisted of sneakers, lycra skirt and t shirt. She was a unusually powerful vocally considering her small frame and I was pleasantly surprised to find she didn’t sound like she was mimicking another female act. Usually when observing new acts you can usually align them to sounding like they’ve been influenced by others before them but Ruby genuinely had a wide range of unique sounding tracks. Some were ballads; others were high-energy festival anthems- a really impressive set! Later that week I caught her on BBC2’s Review Show where she sung a ballad and the show reported back a great response to her! Will she be the latest in a long line of African rooted Londoners making it big this year? I’d bet on it!

I was invited to see female saxophonist star Yolanda Brown perform at the Hammersmith Apollo with the Royal Philharmonic Orchestra. That was impressive! I’ve watched this young lady come up through the years, grinding at the craft, doing numerous small shows at legendary jazz venues like Ronnie Scott’s etc and win a MOBO award. She continues to generate a huge underground fan base of real cultured music lovers and as testament to this fact her 2 Hammersmith dates saw packed houses. Its not often I go to something this classy in the music genre so I took the biggest celeb in my life-my mum-and William MacLauchlan-who was my boss and VP when I was at MTV. We enjoyed a pre-show dinner up the road at LALA and then were ushered into our seats –I always request stalls-I like to be near the action. Sat alongside us on one side were ACLT hero’s Orin Lewis and Beverly De-Gale, Damilola Taylor’s father Richard Taylor OBE and MBE and superintendent of MET Police-Leroy Logan. On other side were actress Judith Jacobs and DJ Spoony that was the maddest heckler all throughout the show and had us all entertained! Also entertained in the audience were Ashley Walters, MP Dawn Butler, PR goddess Jessica Huie, ChoiceFM presenter Kojo, Jamaica’s High Commissioner for the UK, Anthony Johnson and many more.

Yolanda’s set was fabulous! Most of the audience were smartly groomed and watched in awe as Yolanda took us through track after track accompanied by her side kick-THAT SAX!
She performed both covers and unique material and was joined by an powerhouse vocalist that has sung alongside James Brown called Phebe Edwards
and the Nigerian saxophonist, Mike Aremu who just TORE up the stage!! The crowd were on their feet as the 2-sax mystro’s had what can only be described as a ‘’sax-off’’
In the interval I went backstage to congratulate her on the wonderful show so far and as I entered her dressing room. I curtseyed to her and bowed to her Sax.
At one point in the second half of the show Yolanda’s pianist Oscar proposed to his girl friend onstage- it was brilliantly set up and so exciting to witness and she said yes-aw! Love was certainly in the air that night! Yolanda has truly mastered how to make her art visually exciting and her onstage presence is mesmerising. The fact that she was joined throughout by the legendary Royal Philharmonic was fascinating to watch-the juxtaposition of the 2 were unique and a step forward for true musicians. Yolanda certainly leads the classical music team for #TEAMUK! Post show as I was taking a memorable photo of myself and mummy at the press board-Yolanda walked by and jumped into the pic too- but that photo stays private for fam! Mummy and I had a beautiful night- a lifelong memory-catch Yolanda where you can- a show for the whole family-you wont be disappointed! 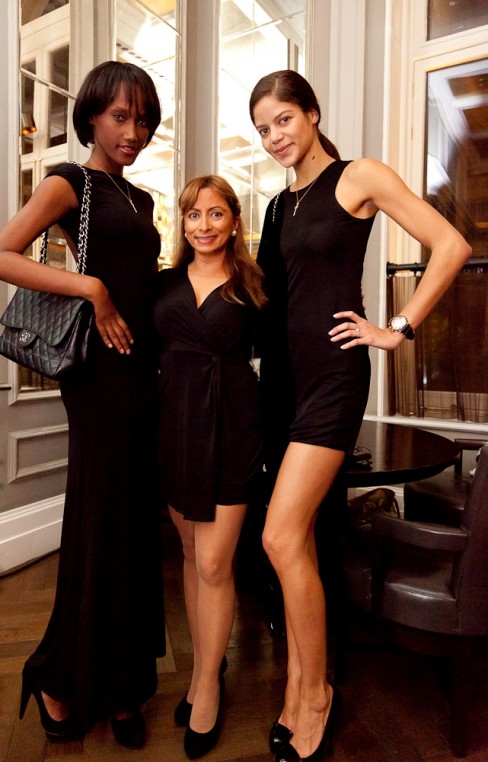 JASMINE LOOKING AS IF SHE’S BEEN SHRUNK IN THE WASH , STANDING ALONGSIDE 2 JA SUPERMODELS- JAUNEL MCKENZIE AND NELL ROBINSON.
I ended the week at a final celebratory private dinner for the Caribbean Collections at London Fashion Week exhibition honouring fashion & musical icon Grace Jones that was hosted by Jamaican supermodels Jaunel McKenzie and Jeneil Williams (of iconic all-black Italian Vogue fame). I foolishly agreed to take a photo with them when PR goddess Jessica Huie suggested it– how crazy is the pic! I look like I was shrunk in the wash! 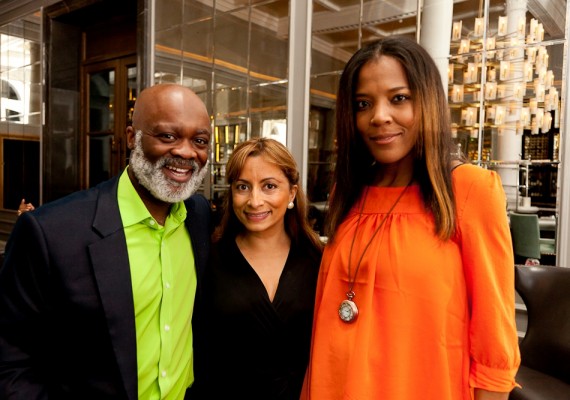 JASMINE WITH BBC RADIO LONDON DRIVETIME GURU AND DESIGNER JULIETTE DYKE
The dinner was the final element of a two-day exhibition of the ‘Caribbean Collections’ at London fashion Week. it was Chris Mcnair of CEDA (The Caribbean Export Development Agency) and Jampro (Jamaica Promotions Corporation ) who were responsible for making the Caribbean Collections exhibition at London Fashion Week happen so hats off to all their hard work and commitment!
A cocktail reception greeted us as we entered the very opulent, dramatic surroundings of the sumptuous Corinthia Hotel just off the Embankment. Imagining this was going to be a ballroom full of fashion folk and media I was pleasantly surprised to find a very intimate group of VIPs including music act Bruno Marrs had been invited to sit at dinner whilst various fashion collections were modeled as we ate amongst the diners. 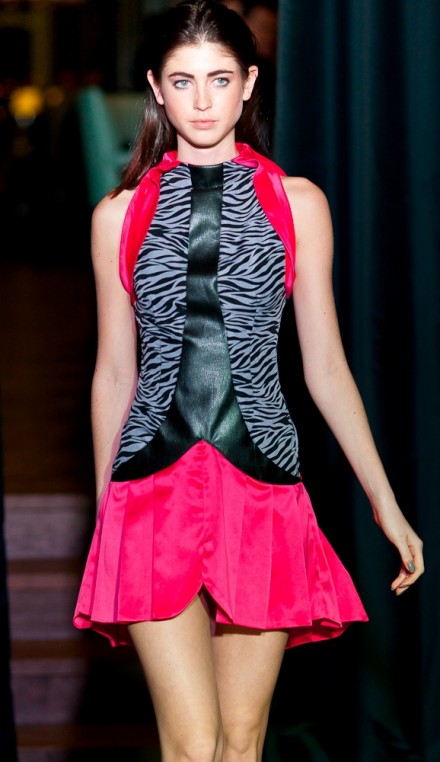 MODEL WEARING JULAN
The creme of the island’s fashion design talent were sat amongst us including designers I first met last year at Tobago fashion week in Tobago. These included my favourites on the night; Gavin Douglas’ all black capsule collection, Mei Ling’s very European muted classic colours collection and designer Juliette Dyke of the ‘Julan’ collection of amazingly tropical coloured long gowns. I also bumped into the Caribbean version of me- girl about the islands, columnist and journo Novia McDonald-Whyte in her very striking white framed Gucci specs!
I was most excited that one of my favourite radio presenters-Eddie Nestor was sat next to me too. Eddie is a brilliant courageous broadcaster that really questions the status quo and the BBC are really lucky to have such a sharp well rounded knowledgeable man on their team- I am sure though by the end of the meal he was delighted to get away from me rabbiting on and on and on.
They had all traveled to the UK to exhibit and illustrate the talent, which the islands have to contribute to the wider fashion industry.
The whole evening was hosted in magnificently regal form by fashion mogul, Chairman of the Caribbean Fashion Industry Association, Kingsley Cooper and I have no doubt that this is the first of many a Caribbean designers foray into the European market!