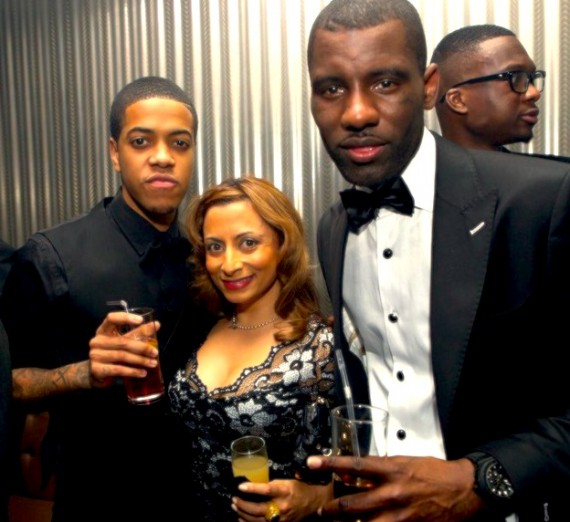 JASMINE WITH CHIP AND BIRTHDAY BOY-WRETCH!
Well readers I have competition. My annual parties have been a staple on the London urban lifestyle calendar since the 1990’s. From underwear parties at The Spot, to my joint Halloween parties with Mariah at The Collection and the Mandarin Oriental hotel, to my geisha girls meets pimps party at Queensgate where Usher, Lennox and Joe danced up a storm, to a multitude of other themed parties from Motown and Old Skool Hiphop at Anaya and more.
Other parties have come and gone but none have stood the test of time for the classic reputation of great music, great crowd and a truly unique night. Until now. A certain North London lad called Jermaine Scott otherwise known as Wretch32 has quietly started making his mark annually on his birthday with a really well turned out party. His crowd and peers from the next generation have been showing the rest how a classy shindig really does go down. Last year he held his birthday bash in Jermyn Street and by midnight it was full of his family, friends and peers like Leona Lewis, Kano, Bashy, and more. 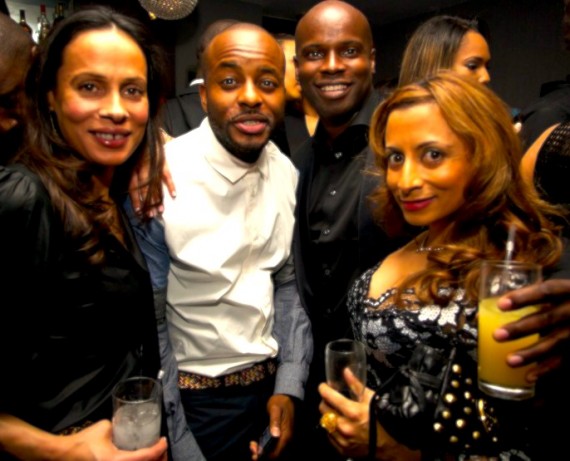 JASMINE WITH PR MAVEN JODIE DALMEDA, DJ MANNY NORTE, MUSIC GURU RICHARD ANTWI.
This year he stepped his game up with a party at private members club Holborn House where the theme code was ‘’all black everything’’ probably to coincide nicely with his current hot single ‘’Blackout’’. Also the invite stated ‘’ Please note all mentions / advertisement of this event is strictly prohibited on any social networks or public forums.’’
Now you know once that’s up there on the invite it’s going to be a very exclusive, private affair. 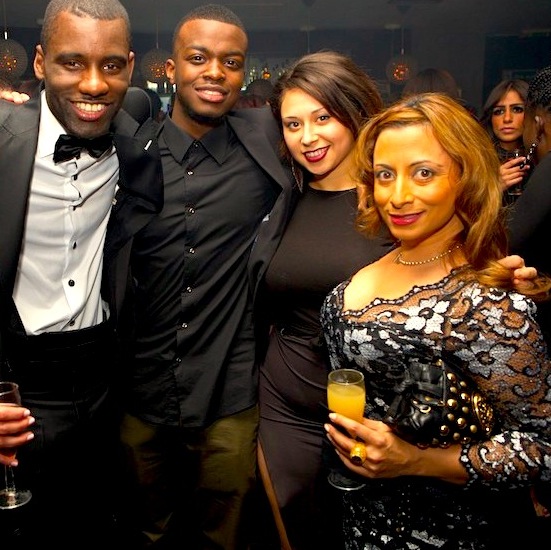 JASMINE WITH WRETCH, GEORGE THE POET, GEORGE’S LOVELY LADY.
On arrival outside the very easy to park at venue, there were flame-throwing fire eating scantily black clad suspender and basque girls lighting up the street. In the past when attending industry bashes I’ve been careful to be demure and slightly business like as it wouldn’t be too professional to be seen all skimpy in the presence of young uns who I work alongside. However on this occasion I threw caution to the wind in the knowledge that I could be slightly less formal and adventurous as we’re all one big professional family now so my cleavage had a bit of an outing lol. 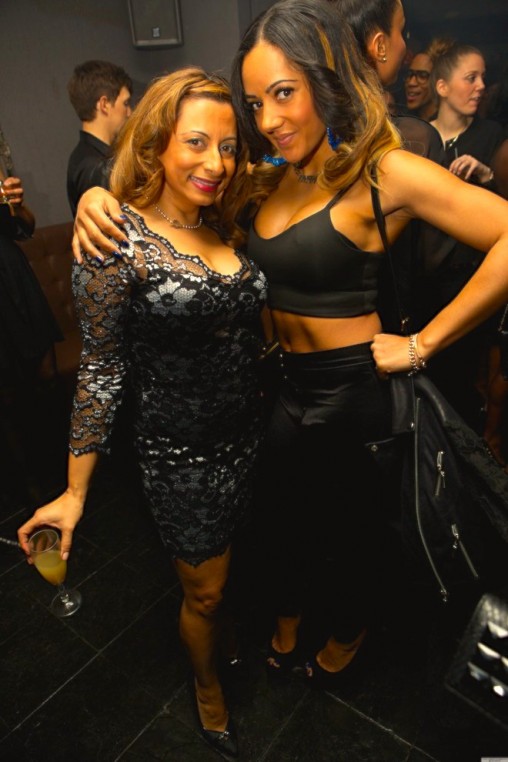 JASMINE WITH THE ALWAYS GORGEOUD PRINCESS NYAH
As I entered the venue I noticed a distinct change in the way I was greeted by all. Males were ‘’omg Jas-you look around 23! Amazing!’’ Females ‘’oooh Jas you sexy kitten look at you!’’ This made me both smile and worry, LOL that’s me, a Capricorn who’s never comfortable with compliments.
We went and made a beeline straight to our host Wretch to wish him Happy Birthday. The Wretch32 branding was everywhere-walls, cakes, cupcakes, ceiling, everywhere. Ever the gent he introduced us to everyone and beckoned for us to have a drink. At his side was his great friend Chip who had a huge welcoming smile on his face. I’ve always known Wretch and Chip to be supportive friends to each other from way back so it warms my heart to see their friendship is still strong and real. Throughout the night the two were seen to be laughing and hanging out together. 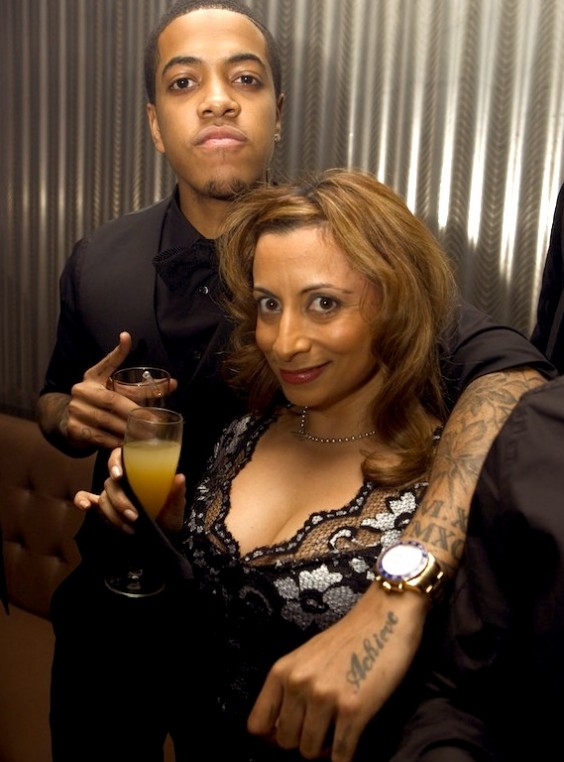 JASMINE WITH A YOUNG MAN SHE’S CHAMPIONED SINCE 2006-CHIP!
I caught up with Chip for a while and am happy to inform you all that his new music is imminent. I teased him on being all grown up now. He laughed ‘’yes Jas-look at me-I even have some chin hair now!’’
I had to do a double take when I spotted Misha B who had red hair extensions put in her hair-she resembled a very young Missy Elliott whom I worked with many moons ago. Whilst the majority of party people looked very slick and elegant in their black attire, there were as expected the usual few who were more keen to make an impression with their nakedness. One lady had on a bra and g string with a bit of net lace over the top. Another wore what was clearly a top as a dress and when she lifted her arms her underwear and way too much else was on show. Also there was A LOT of fake hair extension action going on. Ladies no one believes its your own once its hanging past your butt!. So many ladies did get it right though and looked gorgeous. 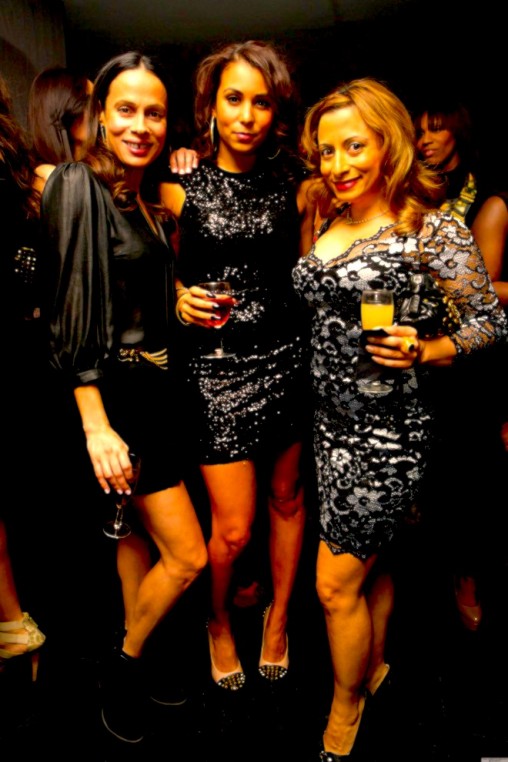 JASMINE WITH JODIE AND MUSIC ACT NY!
North London music act Nyomi Gray, known to many under the name NY, looked classic and sweet in her sequined mini dress, as did model Tia Ward in her shorts and shirt ensemble. Princess Nyah showed how to show a lil bit of flesh yet keep it classy. Radio host Reg Yates was chilling with his lady and having from early on in the night, as was new kid on the music block George the Poet and his lady.
I had to scold DJ Manny Norte for not following the dress code (again-he didn’t follow it for my party last year either), as he was certainly not in black but he did as ever rock the party so was forgiven. The other gent that kept the dance floor hot was Twin B who set it off correctly.
Wretch’s friends are indeed a diverse bunch and upstairs were Only Way Is Essex birds Lauren Pope and others that aren’t as well known. She was rocking a striking knee length black leather dress with metal studded shoulder and looked hot. Singer Egypt had on a dress that seemed to be stuck on with cellotape and was extremely riske!
Dancer / choreographer to the stars Royston was dancing around with singer Terri walker and songwriter Carla Marie. SBTV founder Jamal Edward’s also turned up not rocking the black dress code but I could see more than one person had told him off so I decided to smile and hug him for his misdemeanor and not mention what was already quite clear.
West London’s finest lyrical wordsmith and performer Bashy rocked the rocker look in a black leather jacket and had many a lady attempting to catch his eye.
Music industry major player Richard Antwi was very merry. (Don’t worry Richard-its our secret). Alexandra Burke looked cute, comedic mystro Kojo turned up late!, Sincere, Skepta and Scorcher partied hard. Naughty Scorcher also didn’t adhere to the blackout dress code! 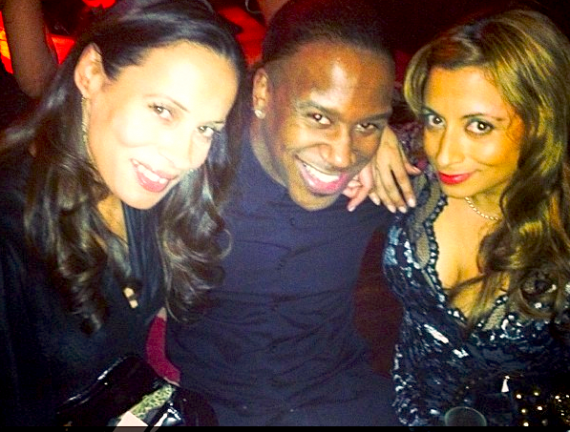 JASMINE WITH JODIE AND CHOREOGRAPHER/ DANCER ROYSTON.
During the night the Fire eating ladies gyrated and writhed around on the bar, which did at times make ordering a bellini awkward. ‘‘Hi please can I get a bellini, a kir royale and a JD and coke?’’ (Whilst trying not to focus on the legs akimbo pum pum spread eagled in my face lol). A certain very high profile music industry bod actually had been watching too many hip-hop videos and at one point was seen pouring his champagne down said dancers butt as she crawled on all fours on the bar. 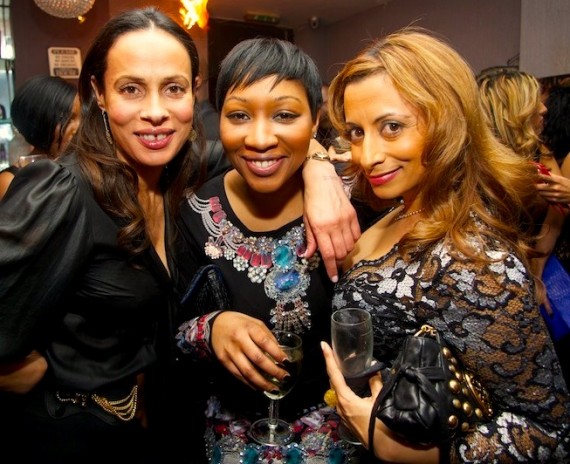 JASMINE WITH JODIE AND SONGSTRESS EXTRORDINAIRE-TERRI WALKER!
Wretch had a lovely breakout area upstairs with a photo booth where his guests were taking photo after photo to commemorate the night. Also on display were cupcakes emblazoned with the number ‘’32’’. One friend said ‘’aw is it his 32nd birthday today then?’’ ummm.
Also a huge square ‘’Blackout’’ cake was on display. Wretch was very presidential all night with an air of relaxed fun and hospitality where he made each and every guest feel welcome and at home. Like every great party shots were flowing, bottles were popping; much laughter was in effect, North London really repped well. Wretch isn’t just a champion in the charts-he’s a champion human being! 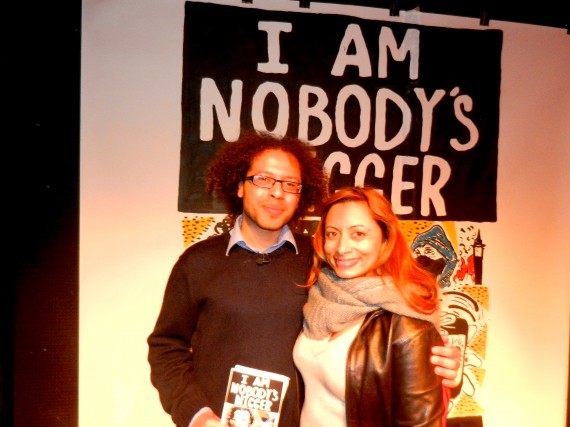 JASMINE WITH DEAN ATTA-FUTURE POET LAUREATE!
2 nights later it was time for a very cultured moment as North West London’s Dean Atta launched his book ‘’I am nobody’s nigger’’ at the Hammersmith Lyric Theatre. He performed a live set of poetry from the book whilst a live paint artist reworked the books title artwork on the stage backdrop. The evening was touching and inspirational. He performed pieces about his growing up in northwest London, his mother, his mixed race heritage and his sexuality. Dean is a very talented gifted wordsmith that can perform live poetry in a new and very unique manner. With accolades from other great wordsmiths like Benjamin Zephaniah and more he is on his path to greatness! Asked at the end of the evening what his future ambitions are Dean replied ‘’Poet Laureate?’’ 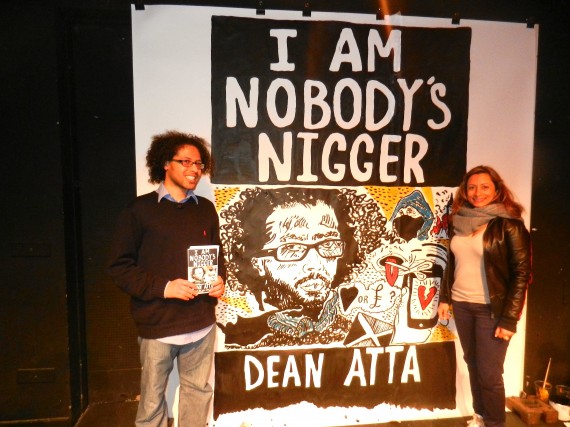 JASMINE AND DEAN, WITH THE COMPLETED ARTWORK FOR DEAN’S BOOK.
And the media tells us consistently our young men of colour are no good, without ambition and not achieving? See above. That’s all.