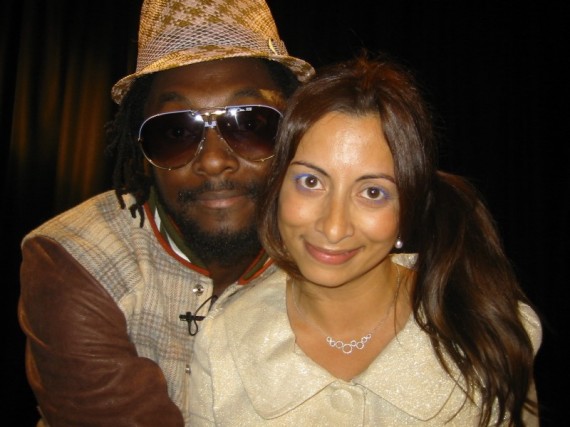 JASMINE WITH WILL.I.AM!
This week I’ve mostly been in hospital looking after my unwell, aging father – a totally exhausting, sad experience that we all have to deal with in time. So my usual fun filled life is on hold, no parties, hair appointments (hence my natural hair colour is back!), and mostly hospital nurses for company.
I’ve also been spending a lot of time in prison. ISIS young offenders prison where young men are trained and rehabilitated into society positively. My LONDON360 team are making an exclusive all access documentary on the brilliant work this institute does. Its heart breaking to see the waste of talent but inspiring knowing they have the best opportunities moving forwards positively with their lives. Many of us grow up min circumstances that aren’t the easiest but we make something positive of ourselves to leave a worthwhile legacy. The black eyed peas frontman Will could just be another gang banger after growing up in south central L.A but he knew he wanted more from life.

The first time I met Will I Am was whilst I was still an MTV News presenter in 1999 and he had come with his band the black eyed peas to MTV in Camden to tell us about their single ‘’Joints and jams’’. The group back then consisted of the 3 male members and no Fergie. Their lead lady back then was a beautiful soulstress named Kim Hill. The band was excitable, enthusiastic, giving and real. I took them to cottons for food as we talked about their music and backgrounds. Part of the TV feature saw us al doing an impromptu can-can dance kicking up our legs outside the WKD club in Camden. Back then BEP weren’t taken that seriously by hip-hop fans or the pop world. They were too different. They looked weird. They didn’t wear matching boy band outfits with a skimpy lead lady. They were unique.
2 years down the line most bands and record labels may have given up the chart challenge. Kudos to this band and their label that they persevered and developed. The hits came slowly but surely. The band worked tirelessly to perform at live festivals around the world. They volunteered to be a part of everything. Even when lead lady Kim left the group it championed on eventually finding Fergie. This was a definition within the group now where everyone knew their place, and even more importantly were happy to stay in their lanes. APL and Taboo always made it clear they were happy to be part of wills gang and all was harmonious.
A decade down the line and will is a UK household name judging reality TV shows, carrying the Olympic torch and appearing in Top Gear- truly impressive for a young black male when so many of our own British young black males cant be seen on this level-or aren’t embraced by mainstream TV in this way.
This month didn’t start well for him after his favourite super sporty, super expensive car was stolen. He wasn’t cheered up too much by his studio sessions producing new music for Britney and Nicole Scherzinger either-after all, once you’ve worked with Whitney and Michael who else matters?
But as they say, when one door closes, another opens…
Now, he’s gone clear by being the first music act to have their music played…. not in an Essex nightclub, not in a Vegas boxing match, not even the Olympics-all great feats themselves. No-wills new track ‘’Reach for the stars’’ was this past week played on Mars. The planet. The track, taken from the 31-year-old singer’s upcoming album, Willpower, is released on October 15 and was played from the speakers of the Curiosity rover which landed on the red planet earlier this month. Will said he was blessed to be a part of first song ever to be sent from another planet…mars to earth!. For four minutes and 24 seconds last Tuesday, Curiosity acted as a $2.5bn radio station, streamed as part of an educational showcase at Nasa’s Jet Propulsion laboratory in Pasadena, California. Members of the team that successfully landed the rover on Mars earlier this month will explain to students the mission and the technology behind the song’s interplanetary transmission.
Will.i.Am was present at the event, where officials announced a new partnership between the US space agency, Will’s i.am.angel foundation, and digital curriculum company Discovery Education. Will revealed ‘’ Reach for the Stars is “a new composition about my passion for science, technology and space exploration which I wrote last year, when Curiosity blasted off toward Mars’’. He added jubilantly like a kid that just beat me at chess- “My song is finally going to be beamed back to earth- how cool is that Jas!.”
The timing was made even more poignant by the death of astronaut Neil Armstrong last Saturday. Will’s song includes the words “Why do they say the sky is the limit/ When I’ve seen them footprints on the moon?” the 37-year-old sings, with strings, choir and heavy Auto-Tune. “I know that Mars might be far/ but baby it ain’t really that far.”
The event took place at NASA’s Jet Propulsion Laboratory in California. The event was streamed on the agency’s website and broadcast on NASA TV! Now that’s not running the city-that’s running this planet-I know somewhere Jigga’s kicking himself he didn’t think of it first! 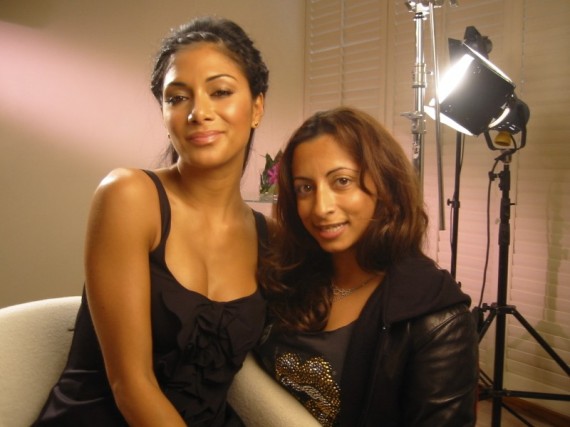 JASMINE WITH NICOLE!
Will’s friend Nicole Scherzinger is another elegant and graceful act I’ve always got time for. When she first came on the scene I was ecstatic that another brown skinned, dark haired, articulate female was representing me and all that look like me on the world stage. It’s important to have visual representations of every look in the public eye especially when it goes against stereotype. Nicole makes me proud to be an olive skinned woman of colour!
When she first came through with the PUSSYCAT DOLLS she was always the clear winner in that group. I always called her the Beyonce of the troupe. Both ladies have that tenacious winner spirit that makes them pull through and give everyday their all. Nicole would be as exhausted as her band members on and offstage but when the camera turns on she’s going to be ready to go. This is why leaders deserve all they get-they deliver when others give up. Nicole has played the game. Her way. With style. She was dating an industry bigwig years ago and now has Lewis Hamilton on her arm. Not bad for an ethnic woman who didn’t have the best circumstances growing up. Whether in the uk, Dublin or in the states when I’ve worked alongside her, Nicole has always been friendly, respectful and a joy to film. She works hard at her craft. Her dance lessons are gruelling, her vocal sessions are exhausting, and her press junkets are knocked out with ease. It’s no wonder she’s a Simon Cowell favourite. She is easy on the eye and from a TV producer’s point of view she’s easy to work alongside. She’s finishing up her new album currently working with Will, Sean Garrett and others. Can we learn from her go-getter attitude? Can you put that extra effort into your day and everything you do to join her on the winner’s podium? As Drake says ‘you only live once’. A phrase that’s been made even more poignant to me this month. Live life!