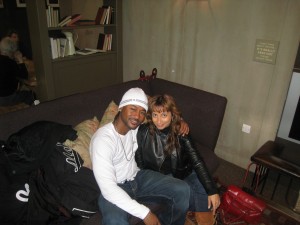 My cashmere sweaters from Uni Glo (I only wish they were from Prada), have been attached to my skin since the beginning of October so now that the weather has stepped up the chill factor a few notches its all I can do to stop myself walking out of my crib with a hot water bottle!. Luckily there’s been a lot of work and multitasking keeping me warm on my toes and there have also been some hot events to balance out the ‘all work – no play’ fear factor.
Hip-hop godfather Russell Simmons was in town this week to host a charity event that raised a cool million pounds for his cause. The lovely Michelle Williams attended alongside a lot of very wealthy folk. Just being in the room made me realise that there really is a lot of money available and up for grabs if you know how to pitch correctly for it.
Michelle also invited me to the massive NFL American football game at Wembley stadium on a brisk Sunday afternoon where she was singing the national American anthem to kick off the game. She sang beautifully in that strong, grounded voice she has been blessed with and it was also a once in a lifetime experience for me to attend. At MTV I never got involved much with our NFL programming and when Trevor nelson would get very excited about it I would quite happily let the males in the production team take over producing the shows. The game was immediately fun for me with its huge razzmatazz of fireworks, marching drum bands, trumpets, cheerleaders, floating helium balloons and much flag waving on behalf of the san Francisco 49’s!. However having said that ,once this grand introduction and fanfare was over it was the most boring game ever. The action takes place for a few seconds at a time before stopping in a repetitive stop-start manner. For 3 hours!. My mate and I soon put our access all areas vip passes to good use by taking a wander around the stadium which took us into every nook and cranny you can imagine. The photo room, press room, bobby Moore dinner suite, players tunnel and even….the staff canteen. That was hilarious. Clearly not dressed as staff or looking like staff we strolled through as 100’s of pairs of enquiring eyes followed us. The security guards even assumed incorrectly that my mate was a footballer and gave us a personal escort around the venue! I knew we had pushed it though when we found ourselves pitch side standing right alongside the players bench. We attempted to look like personal trainers and physiotherapists but within minutes an official caught on and politely informed us that we shouldn’t really be so up close. We laughed , apologised and returned to our seats with our £10 fish and chips and enjoyed the rest of the game-all 20 minutes that were remaining.

Next I popped into the D&G store for their joint party with INSTYLE magazine which was attended my lots of fashion peeps, models and Dizzee Rascal and Alexandra Burke amongst others. The next day I returned to the D&G celebrity closet to join VIP stylists to the stars Ruth and Chandni for a posh afternoon tea which we were having at the uber posh Wolesley Hotel. As I arrived ROC Nation sweetie Alexis Jordan was just finishing her fitting for a gorgeous gold mini Alice in wonderland style dolly frock that she was going to rock to switch on the regent street Christmas lights that evening.

Finally I met up with former ‘’Westside’’ hit maker, LA based TQ who happened to be in the UK for a few days to shoot a video for a brand new exciting music deal he’s just signed. I recalled interviewing TQ at the height of his ‘Westside’’ fame about 10 years ago in the main front window set of the then sonymusic building in great Marlborough street. He corrected me and revealed it was way back in 1998! And that on his current uk trip it was trip number 33! His hit had us hearing his voice on the radio 24 hours a day both on urban and mainstream radio and then just as if dynamo the magician had waved his magic hand over him, he disappeared. Totally. So when he approached me to have a catch up I was intrigued. Who wouldn’t be!
TQ explained that his hit had been so big that it kept charting at different times in various countries all across the globe and so he  was travelling constantly to perform it for months and months as its success was a rolling stone. He admitted that he certainly made some money from that song and continues to do so till this day.
TQ revealed ‘’When I first started I was just a song writer for different bands like n sync etc and travelled around the world on business. Sony my publishing company and after so many of my songs were hits for other acts they asked me to record as an artist in my own right. Even though I was content being just a songwriter they made a great offer that I felt I couldn’t refuse. I’ve always been into business. With ‘’Westside’’ I sold 50 000 copies around the world. I was financially secure and selling on my own. Then I signed to a big label and performed in a lot of different territories. When I parted ways with the label I continued making music and since then my fans bought my music directly from me’’.
TQ has been putting out his work silently and contently making a living via his own website- proof that not every act needs a major record label to back them. However with his new album-his 7th ,He has a new type of deal with Bauer Media who run KissFM, 4 Music, Kerrang and many other music brands. He’s the 1st act that Bauer have signed! .His new single is released via bauer on Jan 10th which is why he’s been spending a lot more time here in the UK. Every time he’s in London town he stays in east London-he tells me he likes the eastside as he has friends down that way as well as a property he’s bought for himself as his UK base.
With his new material TQ admits he ‘’ wants to break the genre as people keep labelling me rap and R&B, I listen to music now and I don’t even wanna be connected to R&B music right now’’. With that strong statement I pushed him for an explanation.
TQ expanded ‘’One of my biggest problems is people don’t write their own music and therefore I don’t respect them. If I wanna listen to an artist. I like Anthony Hamilton and artists from the nineties.Most people don’t wanna be put in a bracket. It’s all about breaking the mould’’.
TQ himself hopes to break that mould with his new album “I am legend” which for now is just a working title. TQ revealed that he worked a lot with a uk producer called ‘steel bangles’. He elaborated ‘’A friend picked me up and introduced me to him. I had only come here to shoot video for a couple days. But after we met musically it was a great relationship and so I stayed longer to work with him on my new material’’.
TQ’s first single is a toss at the moment between 2 of his new tracks ” I wish” and “no better love”.He says ‘’No better love’’ is a club joint whilst ‘’I wish’’ is a break from the norm- a positive song about the future and freedom of speech’’.
The new album is full of touching concepts like defiance. He added ‘’there’s a lot of heartache from where I come from. My message is keep on fighting’’.
The video that TQ popped over here to shoot is called “Oh oh” and it’s the 1st of his 3 single dealand features artist Danielle Senior who is the second artist that Bauer have signed. He describes the track as ‘’a duet, a dance record. Pop and club orientated, its a catchy joint. The video is a simple performance video’’. Describing the video concept TQ said ‘’the vibe of the song is that we are in a club with our significant others catching each others eyes-its just a flirty video’’.
As we were speaking a very excited young woman interrupted us and happily requested to take a photo with TQ.i laughed. TQ smiled and stated ‘’Everything I do is cos of the fans. I have the same fans from 10 years ago. I’m trying to make stuff for them. In fact the fans out here suggested I do collaborations with Wiley,  D Double O, Preeya Kalidas, and others so my new stuff is a great UK – USA remix.
With that TQ hopped back onto a plane to return to his homeland where no doubt he had a lot of business to catch up with in his companies which he runs which include a marketing company, a Car company , a Mobile phone company and a company that makes and sells blunt wraps.  Not merely about the cash TQ also has a charity, which he founded in 2000 which aids youth from inner cities to go to college.
A good chat with a man who clearly has a very solid, unfazed by fame, head on his shoulders.