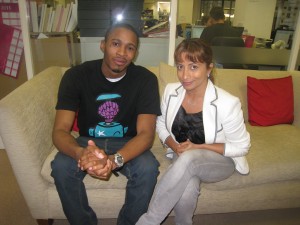 August and September are notoriously busy months what with summer parties and events galore. I have been working harder than I ever have in my life this past few months with projects from Channel 4, ITV, MOBO and the BBC so I decided that I deserved at least one night out to let my hair down and shake a leg. This was done at the BBC staff carnival party, which never fails to please. It was a full house by 9pm and people weren’t backward in coming forwards with their soca bottom action and beverages were flowing heavily, luckily not all into my throat. Genesis carnival band ladies were in full costume in the house and entertained us with their pre-carnival jubilation. DJ’s Seanie B and Simply Jus Music sound system had us all two stepping and doing the cameo dance with full screaming and step it up gusto.

The next morning my Godson and his mum popped over early in the morning just in time to polish off all the fresh pancakes I’d just made-much to the held back amused vexation of the boy friend who had assumed he was going to guzzle them all down all by himself. Hilariously the godson returned the following week unannounced after his early morning football game by which point the boy friend was one step ahead of him and had put his batch of pancakes aside in advance!

My girls and I hit the hip-hop karaoke to fuel our never going to be Mariah passions. Even though I’m tone deaf I couldn’t keep off the mic and at one point they all had to sit on me to stop me dominating the set. My bad behaviour didn’t last for long as I had to summon up my best manners for the UK’s number 1 Hip-hop photographer Paul H’s baby son’s christening which was attended by his nearest and dearest which also included the cream of our hip-hop community.
On Saturday night I dragged my West-London-for-life butt down to comedian Eddie Kadi’s one- man show at the 02 Arena and then it was time for the MOBO Nomination Launch Party where anyone who is anyone in the urban music scene was seen. (More on that next week).
Even with all that social butterfly action I still was most excited about Sunday morning when my brand new silver, ‘A Grade washing machine with maximum crease free spins ‘was delivered- a true sign I am getting old.