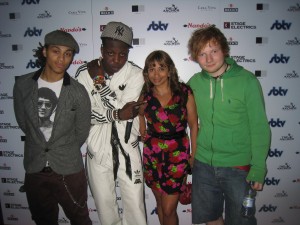 I was unlucky enough to be invited to the 1000th red carpet celeb filled show of the west end musical Thriller (where Blue and Shaheen performed in cameo roles) whilst I was away in Tobago! But every cloud has a silver lining and I was lucky enough to be offered tickets for when I returned instead. Saturday night saw us arrive at a full house at Piccadilly’s Lyric Theatre where a diverse set of public attended a night to remember. The show took us on a journey through Michael Jackson’s musical career starting chronologically with his Jackson Five family hits. The songs were sung averagely to begin with and had us entertained but dubious but it wasn’t until the 2nd half of the show when the set, lighting and cast really came to life and had the audience excited and dancing in the seats and aisles. A few different actors played the role of the young Michael Jackson and then the older Jacko. The younger actors could’ve in all honesty been better. They looked sweet but vocally not the strongest and after watching Britain’s got talent and being spoilt by artists like little Welsh Shaheen they seemed pretty average as they ran through the Motown nostalgia-fest which included I Want You Back, The Love You Save, ABC and more.
One of the actors that played the character of an older Michael and took the part of main narrator in the show was Haydon Eshun who used to be the main singer in eighties boy band Ultimate KAOS (at the age of 9 years old) who a then unknown Simon Cowell put together. Ultimate Kaos back then started as Sinittas-backing dancers, as Sinitta at the time, was dating Cowell. Hayden did a really good job and (unlike another of the actors, who in a very high squeaky voice which was often off pitch sang Smooth Criminal, Billie Jean and Thriller,) was very accomplished. Hayden was as strong singing as he was narrating and held the show together really well. However it was the lead female actress and singer Trenyce Cobbins that really showed she could stand up alongside the men and even out shadow them at times with her very strong vocal ability and her physical performance that had me mesmerized as every inch of her body was on point performing all the way from the ends of her fingers to her high heeled strapped up toes and so strong were her postured poses whilst singing and at rest she was gripping and alleyes were on her every time she was onstage.
When it came to dancing though, Ricko Baird was my favourite Michael as he really encompassed the physicality and lithe, lean, very fragile quality Michael had.
Throughout the show at intervals the narrator would remind us of Jackson’s huge incomparable accomplishments and record-breaking sales figures flash on a video screen. Just as the cast took their bow before the encore my guest got quite het up and outraged that we hadn’t seen Billie Jean, Bad or Thriller yet and as sure as night follows day the encore was indeed those 3 tracks and had him dancing and jumping happily satisfied with the encore.  Throughout the show the music reminds you of how great Michael’s catalogue really is and the audience were literally all bopping their heads and swaying at all times in their seats and by the end the audience were and down in their seats dancing and singing and even jumping on the posh red carpet trampling their eaten Haggan Daaz ice cream cartons as they leapt up and down as if they were at Glastonbury- a great nights show if you want to experience good music and entertainment in the west end and at incredibly inclusive prices for the whole family too. In fact THE VOICE should have a VOICE READERS evening there! (I know the vibe would be that much more special with us all up in the lyric theatre!).

Its been a good minute since the good old days of record labels extravagance throwing opulent parties in decadent venues where guests dip into silver platters of mini food stuffs, binge hard on champagne Bellini’s all night and are entertained by a superstar before falling intoxicated into a paid for by their company Addison lee taxi home. So when a snazzy invite popped into myinbox (unlike the stiff black and gold posted envelopes from yesteryear that just seemed that much more exciting to open), I made it a hard pen date in my diary.
The invite was for the relaunch of the website for SBTV- a London based youth and music site that in recent months has gained an underground cult like following. . SBTV describes itself as an online youth broadcaster on YouTube and is at the forefront of new talent around the UK. That’s pretty much it and a lot more. SBTV are a multi-faceted company with a team of talented, highly skilled, passionate young adults who can be found working on web based viral content at a range of different events. From street shot freestyles and music video production, to the red carpet glamour of film premières, SBTV are currently definitely a site to be reckoned with. So many UK based online sites quote themselves as being the UK’s leading urban broadcaster’’ but SBTV are that are a lot more as they have diversified into all genres and not limiting themselves with stereotypes at all. From their intelligent, articulate Caucasian female presenter Georgia to the CEO of the company being a young, black 20-year-old male called Jamal Edwards (I told you all about him last year), they have really switched up the status quo!
As if this in itself wasn’t on another level in itself, Jamal and his team also managed to do the impossible! Get the country’s biggest most popular chicken food restaurant-Nandos- to become a brand partner and hold the event at one of their flagship restaurant on the South Bank which was packed full when we arrived just after the start time of 7pm- clearly free chicken being served all night endlessly on platters and never running out coupled with good times equals a popular party! I managed to scoff a whole mini box of their delicious garlic olives on entry meaning all those that conversed with me during the rest of the night had to eat some too or risk being fumigated by my breath!
The good times were in the form of stage performances every 30 mins when a music act took to the stage for a really short set. I managed to catch Maxsta, GFrsh, Loickk Essien, Island records new signing Angel, and U.S songstress Keri Hilson all do a short set each but it was Suffolk born, ginger head Ed Sheeran whoblew the crowd away with his easy manner, great live dynamic and hit songs.What a charmer he was! The entire crowd screamed for him non-stop-I’m convinced he’s bring sexy back for the red heads in society! Watch this space-next year he will have lost the shaggy hair and surfer garms and be on the front of GQ with a six-pack. Afterwards I spoke to Ed outside as we got some air-he had worked so hard onstage his dry head was totally soaked with sweat once he’s finished. He was extremely eloquent and charming which I know will take him far. Jamal himself finally took to the stage and read his thank you speech from a piece of paper bless him. He was very sweet in his humble thanks to his team and even revealed that SBTV have a new show on Channel 4- you know you are big when you have a show about making a show!. Whilst there was too much to love about this party- free chicken! Free beer! (Bet Ludacris wished he’d have thought of this for his album launch for his ‘’chicken and beer’’ disc!), the ONE thing I LOVED about the night was there was no VIP AREA! I have always stated that VIP areas equal bad vibe parties- Puffy taught me that- it was proven as the vibe and good energy around the room with all being equals was mature, fun and sexy!
Guests that just turned up and mingled included JLS’ Oritse, actor Dexter Fletcher, actor Will Poulter, Flawless dancers, Devon Anderson, Lucian Laviscount,  new ROC signing Rita Ora, Louisa Lytton, Adam Deacon, Preeya Kalidas, Labrinth, Ms Dynamite, Cher Lloyd, Twist and Pulse, Cleo Sol, Davinche, Bluey Robinson, music A&R TwinB, DJ Ras Kwame, DJ Shortee Blitz , Wileys manager John Woolf, girl group Rough Diamonds and their manager Carla, Shola Ama, DJ Sarah Jane, Eastenders actor that played Billy and a number of movers, shakers and taste makers from the capital.
The night was a true success in so many ways- salute to the SBTV team and Jamal Edwards-you are putting the rest of the dawdling old skool media to shame!