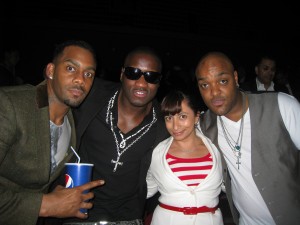 JASMINE WITH RICHARD BLACKWOOD, LETHAL B AND DONAEO.

Mothers day is fastly approaching so this week I took my mum down to celeb fish spa Anesis in Clapham to have her feet nibbled at by little fish before treating her toes to a wonderful pedicure- it was well worth the squirming ticklish moments I had to endure. I hope you’ve all booked mothers day lunch or something as equally festive to do with mummy this weekend! After all she did spend 9 months bearing pain and discomfort for us, ruined her body for us, gave us her last pennies, spend days and days ironing our school uniforms, years cooking our meals etc etc…(see mum-all that cussing and nagging has sunk the facts in hard! Lol)

During the week I caught Plan B’s show at the 02 arena. He was the biggest selling uk act of last year so I was intrigued to go check him out. The 02 was fuller than ive ever seen it with fans from all walks of society and beginning the performances was beatbox mystro faith sfx who impressed us with a long beatbox segment which incorporated both british and American catchy hit singles that we all recognised and danced along to most astounded by. I mean imagine what he can do with those lips and mouth if he can sing and beatbox simultaneously?

Before long it was time for the main act and as the set revealed itself we could see a stage that had been set into a brilliant original red themed retro cinema nightclub vibe with around 15 Northern soul dancers who were busting all sorts of retro moves spinning and wiggling all over the stage.

Plan b strutted onstage in a slick well-cut suit , I giggled as I realised that his look reminds me of a character out of a guy richie movie.

his older hip hop side came out in his spoken word sections. Especially when he told us about his songs about smoking cigarettes and weed. The great thing about plan b is he is good and lucky enough to sound exactly the same live as he does on record. We were at least 5 songs into his set before seeing any evidence if his past skill-rapping which it has to be said is best kept to plan b. plan a for him is definitely the eighties influenced singing. Although it has to be said a large section of the crowd did know all the words to all his old rap songs too. With the uk tour totally sold out with numerous dates at the countries biggest arenas (02 capacity is around 23,000), I wondered if plan b is the highest grossing uk urban act?. When he went into his intro for his hit single “Praying” , he had the arena up and dancing. After his hit “She said” , the finale saw us all singing along with him to a medley of uptempo motown classic hits and so thr night ended with lots of wedding style drunken dancing!.

After the plan b show we thought we’d stop off at a party before heading home.

The Adidas Y3 team threw a bash at the paramount club on the very top of centre point- a stunningly high building with panoramic 360 degree views. People like idris elba,ozwald boateng,jodie harsh and the like were being very loud and fashionable. The crowd was way too fashionable for me. And you know fashion crowds only like to dance to hard house. One cocktail knocked back and I legged it outta there!

There was much excitement leading up to the film premiere for anuvahood. Written and directed by young actor Adam deacon this was a big deal for young urban brits.
Understandably many thought the film was the 3rd in a trilogy after noel Clarke’s kidulthood, and adulthood. The “hood” may have caused the false presumption. Apparently Adam had approached noel to direct initially but noel had been busy on his own projects so Adam bit the bullet and did it himself. And how well he did! People may have attempted to stir up friction between Adam and noel but both were humble and unified with noel praising and supporting Adam on twitter and Adam shouting out noel in his opening speech at the premier.
We turned up to the premier at Leicester sq world famous empire cinema where there was no long red carpet as usual due to construction works for Olympics 2012 going on. But that didn’t stop the small group of young girls screaming and chasing their favourite acts like chase and status, lethal b, donaeo, richard blackwood,kojo,jocelyn gee, mclean,ace and vis,big narstie, Aggros Santos  Preeya Kalidas  Simon Webbe  Jasmia Robinson  Alison Carroll  Josie Gibson,  John James Parton,  Fe-Nix,  Liz McClaron,  Terror Danjah,  Lee Ryan,  Imogen Thomas,  Ironik,  Bianca Gascoigne , Lucien Laviscourt , jessica Jane Clement,  McClean,  Donaeo , Esmee Denters,  Louisa Lytton,  Professor Green,  Dexter Fletcher,  JME,  Lizzie Cundy and Roll Deep.

Once inside I found my tickets were in an amazing spot-with all the featured artists and their respective teams. I had Richard blackwood ,jme ,doneo and lethal b sitting immediately behind me so it wasn’t hard to figure out which slanguage inventor was yelling “dench” at regular intervals.
Very recently UK TV has set new rules to allow “product placement”. The act of a high street brand being allowed TV airtime after the TV broadcaster has done a deal with them. Adam took the idea one step further by name checking the sweet brand Fruitella in his scene in Mr Patel’s shop and so every red velvet cinema seat had a packet of Fruitella on it. A lot of the TeamUK acts around me were naughtily stealing them before folks got to their seats and were none the wiser. Take the kids out of school but…

Many young talents from our scene had mini features in the film….comic Eddie Kadi playing the stereotypical African traffic warden, Richard Blackwood playing the teacher, Giggs playing the casual onlooker,Lethal B was a local resident,
As if that wasn’t enough, all our TEAMUK acts had features on the soundtrack. Voices I recognised included Tinie, Dizzee ,Donaeo ,Mz Bratt, , BBK and more.
The movie had a distinct feel of its own. I’d describe it as urban slapstick comedy.

Adams writing was very clever and humorous and his very excitable, extrovert character “K” or “Kenneth” as his mum likes him to be known.  There were many stereotypical hood characters, which were totally OTT in their portrayal so reviewers need to understand and acknowledge that or they might not understand it. I can see why a few glammed up older ladies left a short way into the film. They were probably shocked at the language and aggressive mannerisms of the ghetto youth. But if viewed with a non-serious hat on its brilliant comedy- perhaps occasionally a line or joke may have been repeated a little too often.
One particularly horrific scene will live with me forever. It involved reality wanna celeb Ashlene, tomatoe ketchup and toes. Honestly the grossest image ever. I know Ashlene probably thinks it makes her look as if she doesn’t take her reputation too seriously but if I were part of her team I’d never have let her reinforce it.
The film had a simple slapstick narrative set on an inner city estate (that’s projects to you Americans-not an abundant piece of land owned by lords and ladies). The audience laughed throughout the film as it ridiculed the UK gang culture yobs of today. Hilariously ,kids who are actually like this relate to this cos they act like it themselves will love it, and others who ridicule them will love it as its taking the micky. So everyone loves it and Adam’s in a win-win situation.

By the end of this week no doubt the cast that includes Adam deacon, Ashley Walters, Michael Vu, Jazzie Femi, Linda Robson, Lethal Bizzle, Perry Benson, Richard Blackwood, Miss Jocelyn and Ollie Barbieri will no doubt be automatic celebrities. Some lare visibly seen ong term grafters, others it will seem got here overnight, but make no mistake , these people have been slogging away at their dream for years. Now they can live it!.