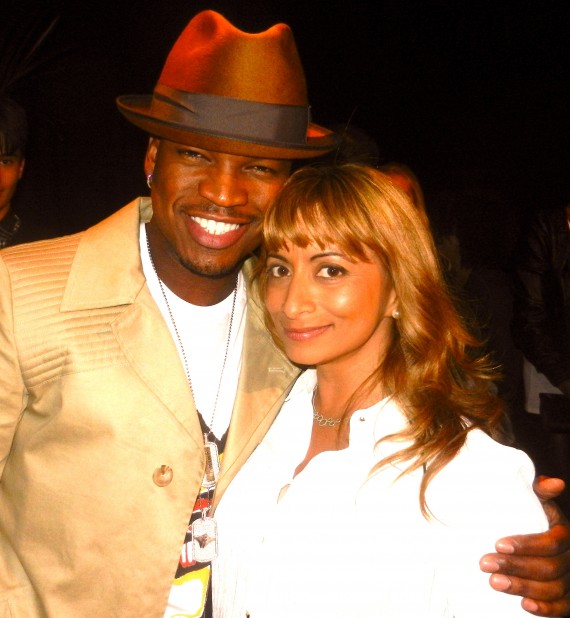 JASMINE WITH NE YO AT HIS MALIBU RED PARTY SHOW.
On a torrentially wet weekday evening in the centre of London when the streets were empty, miserable and cold a nightclub was full and sweaty at 7pm. loads of Ne Yo fans had gathered at an intimate performance by the king of melody which was in association with his new beverage Malibu Red. The venue was Salon in W1 which if you’re as old as me can recall raving at when it was called both Legends and Samantha’s!

Every urban music act worth their salt now have a liquid they insist on promoting to beef up their already inflated salary and whilst Puffy pushes Ciroc, Jay Z pushes Ace Of Spades champagne, Ne Yo drink of choice is Malibu Red. Throughout the evening a variety of cocktails were enjoyed-they tasted good too. Ne Yo jumped onstage in his trademark black suit, white shirt and trilby costume to an audience of what seemed to be 98% ladies all hot and excited about the superstar act. Halfway through his set he declared he was overheating and after yells of ‘’strip’’ from the ladies, obliged by removing both his jacket and shirt to reveal….nope…not a ripped body…but a t shirt! How many layers!
He did give the pervy ladies what they came for by proving there was a hot ripped body underneath with the expected and now obligatory Peter Andre t-shirt lift.
Afterwards loads of fans including singers Alexandra Burke and Preeya Kalidas queued to grab a pic with him as I sat with his right hand man/ tour manager Ronnie Stephenson and laughed at how far Ne Yo had come in a few years after taking the risk to go from already successful songwriter to stage star! Hey if you don’t try it, it wont happen!. 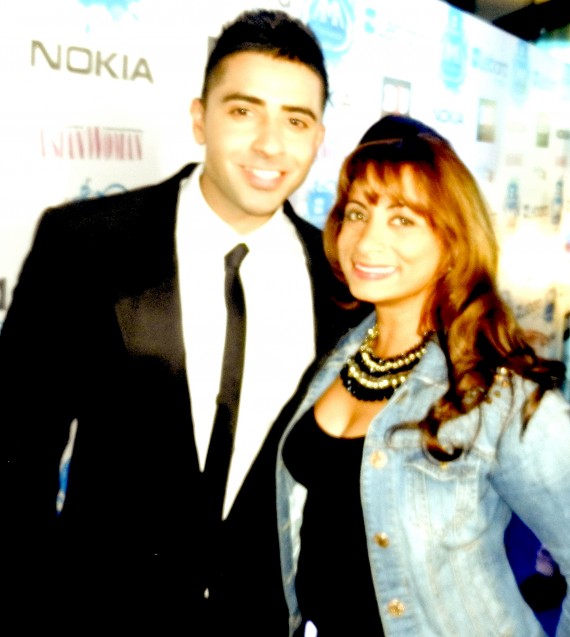 JASMINE WITH JAY SEAN AT ”AT EVENING WITH JAY SEAN”
From one very talented male music act to another…
Next I made my way to the Hilton hotel in Wembley to spend An Evening with Jay Sean. Don’t jump to any conclusions it wasn’t just us. It was a packed rooftop bar full of movers and shakers from the Indian community. The event was thrown by the UK Asian music awards and saw other stars like Adam Deacon and Preeya Kalidas turn out in support of their peer Jay. The evening started with a heaving red carpet area where TV and radio crews were jostling for space alongside staff from MTV, record labels, bloggers, Asian woman magazine crew and a number of new music acts to speak to the celebs attending. Champagne trays were being passed around and there was a genuine feel-good vibe in the air as all present were here to celebrate a man who’s succeeded against the odds. Jay Sean was being honoured by Asian music awards for being their most celebrated artist over the past decade. 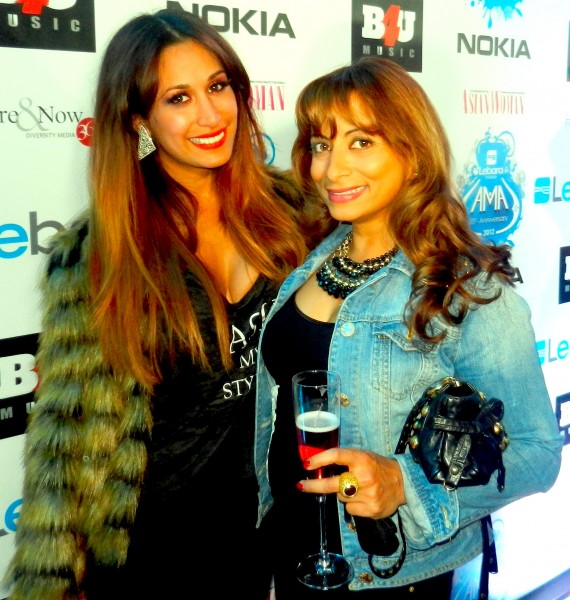 JASMINE WITH ACTRESS/SINGER PREEYA.
Actress/ singer Preeya was rocking a big faux fur coat, her signature tights pants and high platforms, Prince’s manager Kiran Sharma was warm in a roll neck burgundy sweater dress, also in attendance were a number of big Asian acts like Juggy D, Adam Deacon was smart casual whilst his manager Dhanny rocked a suit and quiff!
Jay Sean arrived and the red carpet exploded in excitement. He was suited up in a black number whilst his lady wifey Thara looked stunning in a green Victoria Beckham-esque dress? Once all the red carpet interviews and networking were over the audience took to their seats as BBC ASIAN NETWORK breakfast show presenter Tommy Sandhu lead Jay through a very entertaining interview onstage. The conversation flowed, the information was intriguing and the laughs were aplenty. It made me wonder why mainstream UK TV hadn’t snapped up Jay Sean to appear on mainstream shows like the X Factor and Jonathan Ross show. I mean, this guy has achieved things not even Robbie Williams has abroad! He has had USA number 1 singles and albums, broken all download records, had its in every continent and is treated like a superstar across the globe so why not England? 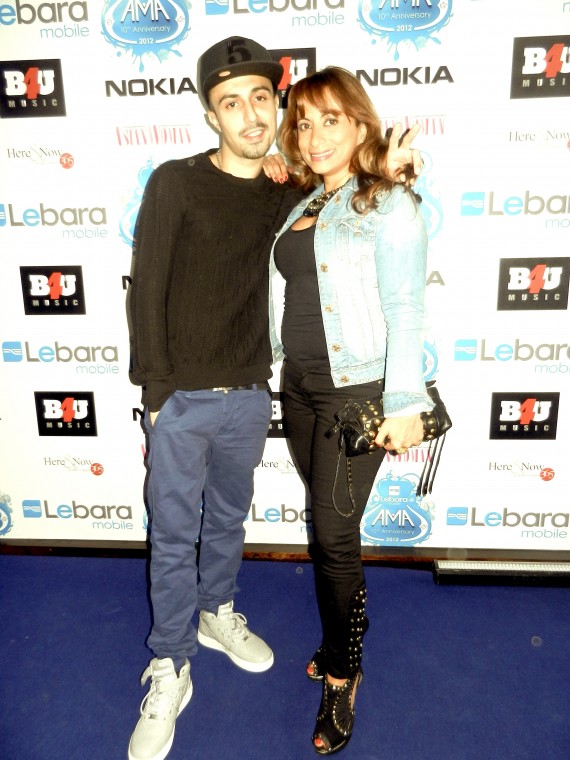 JASMINE WITH ACTOR ADAM DEACON.
During the interview Jays family and friends were all present in the audience and Jay referred to them often. He added that his Mum dad grandma and best mates have supported his musical dreams since he was13 years old. Furthermore, he revealed that on trips back home to London he ‘’always stay at home with my mum and dad- why would I want a hotel? Mums is like a hotel when I’m home!’’ Jays mum looked embarrassed as he hot her up revealing ‘’ mum asks how are your label mates? That little man?’’ I reply ‘’ Mum do u mean Lil Wayne LOL?’’. And Jay’s dad can’t get with the whole YMCMB (young money cash money billionaires) tagline and refers to his label as ‘’money money’’. LOL

He has so far won 15 ASIAN MUSIC AWARDS, which is a record. Jay gushed ‘‘the reason AMAs is really important to us here is as it acknowledgment that we as young Asian musicians are doing something well. It’s like a teacher praising your work at school. Someone has to do it if no one else will. We can then continue knowing we’re doing the right thing’’ I will feel blessed when Imagine a few years on when peeps say “I grew up on your music” how old will I feel! I remember when the Asian underground music movement was happening. What we have now n the bangra scene is really unique. Now our music acts are getting younger”.

He explained that he was drawn to R&B, soul and hip-hop via his aunts playing Michael Jackson and Stevie Wonder music whilst he was a kid attending Latimer Upper School. He looked touched as he said that his grandparents had worked hard doing menial jobs so that their children and grandchildren didn’t have to go through life struggling- it was his granddad who used to be singer in family. His father was a gifted county cricket player but wasn’t able to follow that dream through, as he wanted to work hard so Jay and his siblings had a comfortable life.
Jay also added that his dad always said there were only 2 things to decide in his life to stay focused; his decision for a lifelong partner and career choice. That’s those 2 boxes ticked then! He did reveal he’s really trying to break the film arena too but alas after a few auditions still hasn’t been cast but will continue trying. (See that never giving up attitude right there?)
We laughed as he recalled how when he used to rap at the age of 12 his mum didn’t like it, as she couldn’t understand anything he said and pleaded with him to do something she understood.
Jay was in the UK for a rare few days as he was about to board a plane for japan and Australia the next morning to perform on Australia’s X Factor. He sighed ‘’A lot of people don’t realize how many hours goes into this. I’m on a plane every 3 or 4 days. I’m off to japan tomorrow, performing in Australia where I can’t believe I’m so popular! I wrote a song for an Australian group- a boy band called “Justice Crew” which went to no1! And that stuff makes a lot of money so I love song writing for other artists like JLS too’’.
I love Jay’s humbleness LOL. He laughed ‘’It still shocks me when 20,000 people in Madison Square Garden are singing back my words to me- it just blows me away man. Performing with Alicia Keys was nerve racking. It was one of my finest moments. I pinched myself. We both work on the Keep a Child Alive charity”

Jay answered questions from the audience at the end so I asked him whether even though England states it is a very diverse multicultural and open inclusive society, whether the British media just don’t acknowledge his vast achievements globally?
He replied ‘’ I love representing this genre, my race and everything. That means more to me than trying to make money. That keeps me inspired. A lot of uk media that wrote me off early on and didn’t support me often pretend they do and now greet me with open arms but I don’t let that stuff get to me. I am a British music act. Not an Asian music act. I have competed with the best and done quite well-it would be nice to receive that praise but it is what it is’
So I end this weeks column asking in the same way that young black British acts weren’t let through the door and taken seriously a few years ago-are the current young Asian generation in the same place? Will record labels open their eyes to just how many Indian music acts are out there and how much money and spending power their community has? Why aren’t the UK mainstream media not shouting about Jay Sean- he’s had numerous number 1 hits and is a global superstar-bigger than Take That were internationally…answers on a postcard, e mail, carrier pigeon, twitter …all appreciated!

One Reply to “JASMINE’S JUICE featuring NeYo and An Evening with Jay Sean.”