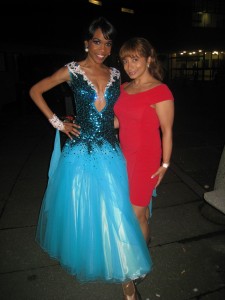 A fortnight ago an e-mail pinged into my blackberry that had me all excitable. One third of Destiny’s Child and solo star in her own right the lovely  Michelle Williams  had invited me as her special guest to watch her do her thing on strictly come dancing!. I thought about it for all of 5 seconds before hitting her straight back with my RSVP. I felt like I’d won the golden ticket in Willy Wonka’s chocolate factory! During the week at work in the ITV building when people were discussing their weekend plans they were open mouthed with shocked impressiveness when I announced I was going to watch SCD. Apparently the tickets are like gold dust!. So we rocked up to the BBC in white city-love that place- a British institution! Nadine Scott from Michelle’s team met us and escorted us to the bar where we met other production guests before being led into the studio. Well that was a shock. I should know better working in TV that all studios look much bigger on telly than in reality. The vast ballroom space that looks humungous on screen was actually much smaller than imagined. We took our seats in the ‘’yellow production guest’’ area. I should have known that our very specific seat numbers would mean something more down the line.
Firstly came the warm up man who was as expected very entertaining, gave us bits of information about the night, the presenters and the usual told before a few times jokes. Then all the talent were introduced one by one. The judges came on. My mate said ‘’do you think Alesha will spot us in the middle of all these guests?’’. No way I responded, she’ll be too focused on her job. Well, didn’t lovely Alesha spot us minutes later and waved hello-bless her.
Next came my mum’s long time crush-Mr Bruce Forsyth. He is such a sweetie and what a pro. After all these years he’s as slick as if he were still a 30-year old- and his face still looks suspiciously youthful too. I know his jokes are meant to be awful, and they were but like your old granddad at the family function you find him so endearing.
Thereafter Tess Daly tottered on in her never-seen-without-vertiginous heels. As my mate drooled over her outfit and shoes (that’s what he said anyway), I elbowed him hard in the ribs.
Once the dance couples began I was mesmerised. I mean honestly- they were all so impressive. Old Anne Widdecombe was clearly cussing her partner all the way through the show much to all of our amusement, Eastenders Jack/ Scott Maslen was astonishingly good and as cute in real life as on screen and was really giving it some, comedienne Pamela Stephenson was very saucy and had all the mens attention with her ever so raunchy wiggling , former Eastenders actress Kara Tointon looked amazing in a white Grecian dress and danced with grace. My mate got all excited as former England goalkeeper Peter Shilton came on but alas peter wasn’t as good with his feet as he was with his hands and was more comedy than hotshot. My mate Goldie did his thing wearing a gold waistcoat and matching hat. Felicity Kendall still looked so pretty and sophisticated years down the line after seeing her in the good years but my male mate was more captivated by Paul Daniels missus Debbie McGee. Apparently loads of guys used to have a thing for her cos ‘’she used to be a sort’’?
For some reason rugby player and Charlotte Church’s ex Gavin Hensen seemed to evoke much hatred from the males in the audience. Admittedly he and his partner did look like the chav king and queen like they’d just stepped out of Movida nightclub but I’m guessing that’s the look they were going for. Actor Jimi Mistry’s mum was sitting next to us and was so proud her hands were clapping harder than ever. Even though she’s getting on a bit now actress and notorious rock star wifey Patsy Kensit looked hot and showed she still has that certain je ne se qua, whilst coronation street actress Tina O Brien was as northern off screen as she is on.  When Michelle did her turn we were so nervous for her but she danced so daintily like a ballerina and did us proud! As they went to the judges score for her the crowd camera suddenly turned on me and whereas I had been grimacing at the judges and giving them my ‘’bad- gal- you- don’t- wanna- mess- with- my- girl- Michelle’’ look, I rapidly switched it to what I hoped looked like a pleasant smile.
In the interval we went to meet Michelle off set and hug her tight and congratulate her for working so hard- its no easy feat to learn a different dance weekly and perform it to a nation!. We then went and grabbed dinner and drinks at the BBC bar before returning to the studio to pre-record the results show that was transmitting the following night. Do you know how much will power it took me not to reveal all the results on twitter there and then? It took a huge effort on my part not to spill my guts!. Meanwhile I had placed my bets on going to see the show record again via Goldie who only went and got booted off that night- so its all bets on Michelle now- although I mustn’t be a Bug-a -boo hitting her up for tickets 24-7!.Michelle- Independent Women everywhere are relying on you to Survive so get to Jumpin Jumpin and don’t let the judges tell you to Get on the bus! Be a Soldier but not a Nasty Girl and it will surely be Destiny Fulfilled. Ok. I will stop now. Peace out.