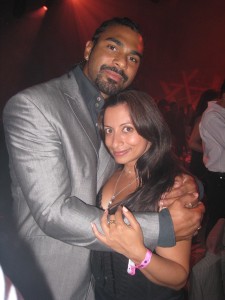 David Haye came, chatted enough hype talk and alas didn’t conquer. He did set himself up but isn’t that what makes a great personality? Had he not so much talk many probably wouldn’t have bothered getting into the fight anyway. He did a pretty impressive job lasting 12 rounds-something many fight experts predicted wouldn’t happen. He didn’t win this time around but he’s still a winner. The world saw him take on the champ. He put enough effort into it. He’s a proud cocky South Londoner and so his post fight talk wasn’t as gracious as it could have been. In fact his opponent whom I really wanted to dislike was such a well mannered, gracious gent I was won over in seconds. don’t write David off though. This man is a huge,ambitious personality that will be back with a vengeance. He has a big personality and a natural charm that makes us all gravitate towards him. He will take another path to his inevitable victory. 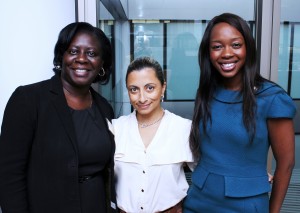 A few weeks ago I received an invitation from the African & Caribbean Diversity group to attend an event that one of their corporate sponsors –law firm Slaughter and May were putting on.

Described as a ‘CityWomen’s Panel Event’ with speakers from ‘leading organisations in Banking, Legal and Marketing Sectors’ I was intrigued to go check it out as usually the inspirational panels I speak on are mostly music and entertainment industrybased. The event was up in Moorgate in the heart of the city where tall, glass and steel skyscrapers that look like a new age modern world dominate the skyline. The theme for the evening was WHY DIVERSITY MATTERS – BEING AN ETHNIC MINORITY FEMALE PROFESSIONAL IN THE CITY; this was an idea which one of the BME Network Committee member’s, Isoken Idemudia (lawyer) came up with. I raced up to the building and was ushered into a conference room full of other similarly power dressed females on a mutual mission to run the world. I was pleased to meet 2 of the organizers- both from Slaughter and May and members of the BME Network Committee, a pair of ladies that aredoing pretty well for themselves up in the high powered male dominated world of law! – both Ngozie Azu – (Lawyer ) and Caron Johnson – (Systems Support Administrator) were eagerly meeting and greeting all their guests and playing perfect hosts. After drinks and mingling we were all seated to hear a brief talk from a few selected ladies that have achieved above and beyond and their thoughts were thought provoking and made me acknowledge that we all experience the same things in our career journeys and are unified by evenings like this that prove we are not alone.

The first quote that had me relieved was by  Sarah Lee, a partner at Slaughter and May who happens to be half Chinese. She revealed that however high up the corporate ladder she goes her hands still tremble under the table!. Good to know! Another high flier- African & Caribbean diversity’s Chief Executive Brenda King MBE reminisced about her way to the top. Nigerian solicitor andPartner at Sidley Austin LLP, Elizabeth Uwaifo, said as a student her confidence was undermined when others deliberately mumbled her name but thename is now a source of confidence and strength as it is a constant reminder of her heritage and uniqueness.

Diahanne Rhiney, the Chief exec of 15 degrees told how one year early in her career she made £3billion for her then employer and got a £2000 bonus!! Outraged she set up her own business.  She spoke about why it’s not ok to stick a black or disabled person in a box. Her dedication and hard work has equaled success and she’s since been awarded many awards. . She has all the staff at her company work one day a week in the community for free as she believes in the power of giving back. Carol Lake, Managing director at JP Morgan said ‘’People have expectations of you-have your own. Plant those seeds early. Be fearless live life. Be adventurous. Have a love for humanity cos careers are great but life’s better!” 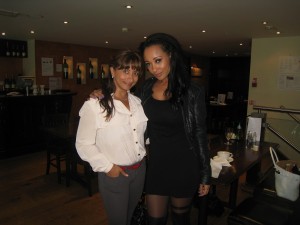 From one set of strong women-to another strong woman!.Something that’s affected most people’s lives is cancer. That word that fills most with dread. The sad losses that people cant understand. The miraculous ones that fought back and are still with us . A few of my nearest and dearest have lost close ones to cancer. When people in my life have been affected by it it’s been hard to know what to say. To find the right words of support and comfort. So when a long time friend-So Solid Crews lead lady Lisa Maffia revealed to me over lunch that her mother has been diagnosed I felt the familiar dry mouth of fear that I would say the wrong thing but wanted to help support her family, but how?. Lisa admirably was extremely calm and positive and in her strong as ever manner told me she was running the Race for Life on Saturday 30th July on Clapham Common with her friends and family to raise money and awareness for the cause. I was gob smacked and touched by her strength, positivity and refusal to play the ‘pity me victim’ card. As a mother herself Lisa is able to compartmentalize feelings of mother and daughter and has remained strong through her fears and emotions whilst she and her family work through this bump in the family road. If you recall So Solids turbulent, meteoric rise to the top you’ll know that Lisa has experienced a lot of things in life but she told me nothing compares to this. Lisa added ‘’It has made me realise how precious life is. Thinking about the possibility of losing my mum has shown me how important a charity like Cancer Research is and events such as Race For Life are”. Lisa told me she is looking to gain as much support through sponsorship via the Just Giving page (http://www.raceforlifesponsorme.org/teammaffia <http://www.raceforlifesponsorme.org/teammaffia> ), and I know her friends are supporting her as she goes through this challenging time.

You’d think with this and bringing up her daughter that she has her hands full but she’s still managing to juggle business with her ‘’House of Maffia’’ projects as well as her solo music career. She enthused “When it comes to music I’m heading in the Dubstep direction, the scene is changing rapidly each year and I’ve been waiting for a new sounds that I like and Dubstep is that sound”. About her So Solid brethren she confessed ‘’I don’t see all of them as much any more but I have love for the times we spent together, i mostly see Romeo as we still regularly work together doing clubP.A.s”. She’s also looking forward to the summer season where she’ll be visiting 9 islands and Dubai!. She takes that moment to reflect on the good old days stating, “Having no responsibilities and having fun…Why did I have to grow up-LOL!””

Despairing about the negative turn many young people are forced to take due to their circumstances Lisa says she still feels positive when she encounters the youth ‘’Young kids respond enthusiastically when they approach me, and usually the first question they ask is “What’s it like to be famous?” but I always tell them to follow their dreams and focus on being really good at whatever it is…. no need to seek fame, if you’re good, fame will follow!”

Then as we ate up and got ready to return to our respective grinds Lisa revealed ‘’look out for me in a new movie m=coming soon- I’ll be featuring in my debut film production “Devil’s Dandruff” based on books by Jason Cook in 2012 and also as a voice over in animation “Rat’s in Space” by Jason Cook & Lisa Cachia!. Go Lisa-see you on Saturday 30th on clapham common where the LONDON 360 NEWS TV crew will be filming your Race For Life!!