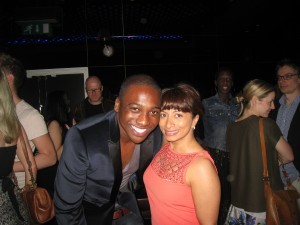 The Easter bank holiday fortnight was full of fun stuff like the ACLT celebrity football event at Brentford Football Club, a friends indian wedding in the biggest sikh temple in Southall, the Royal Wedding, girl friends birthday lunches, dinner parties and my guy telling me I couldn’t cook meat for a non fish eating friend on Good Friday or there would be World War 3 in our crib LOL

Before all that though it was fabulous business as usual. I’d been hearing the name of young 20 year old, former model, now male musician Loick Essien for a while now. His names french and pronounced ”low-eek”. A couple of years Bashy had told me about him.
Loick’s apparently someone who won’t let a chance encounter go to waste – so when a mutual friend introduced him to British rap star Bashy, the result was Loick appearing on the iconic track Black Boys. On the set for the Bashy video, he met Chipmunk, and the two made a track called Beast; and at the video shoot for that song, Loick met Dappy from N-Dubz, who appears on the second single from Identity, the Stargate-produced Stuttering. So the boys got talent, and game for hustling himself forwards through life. I’d heard him feature on a few different tracks for a variety of tracks by the teamuk stable so when I  was sent an invitation to see him perform at his own showcase at the lovely Cuckoo Club in Central london my curiosity led me there in good time even though it clashed with Grammy winner Jennifer Hudson’s performance just up the road. Luckily it seems that their respective teams talked and Loick was due to be onstage at 6.30 whilst Jennifer agreed to come onstage at her event at 8pm. The Cuckoo Club was nice and full of a very non-urban industry crowd sipping wine and networking all in our summer dresses excited anticipating Loick’s set. Loick came onstage at 7pm , introduced himself looking very slick in boot brogues, skinny jeans, a grey t shirt ,black satin lined blazer and the biggest grin ever. He told us he would be performing 4 songs-some from his album ”Identity”, he did so and all were beautifully melodic and vocally very strong. The songs were mainstream commercial and very catchy- genuinely great for a Radio 1 Playlist. He had the confidence of a seasoned performer and the ease physically onstage that I haven’t seen from a relatively new performer for a long time. His media training team need to encourage him to stop saying ”so” after all his sentences-which is just a nerves habit that they can easily kick him out of. Also his 3rd track ”Now”was a very difficult vocally challenging track that had lyrical gymnastics all through it making me think he has definitely been influenced by great singers of our time like Mariah and Jodeci. There were moments I held my breath as it seemed his breathing control may give way but by the end he proved he definitely has what it takes to be big in the game. Funnily enough before introducing ” Now  ” he said the next song was to show that he could actually sing which confused us all because trust me, by the end of his first verse in his very first song that was already very apparent.
Whilst watching him sing I noticed his hands bear tattoos on his fingers: “RAGZ2” on his right hand, “RICHES” on his left. Loick said afterwards “I wanna remember where I come from, and where I want to be,those were the rags days.”   Those tattooed fingers are just the beginning – Loick reveals he plans to get “sleeves”, tattoos that will eventually cover both his arms, depicting “a poor man’s world and a rich man’s world.” His body may still be a work in progress; but his album Identity proves that as an artist, Loick Essien is the finished article. West London lad Loick spoke very articulately to me and to his audience and I have no doubt that he is one to watch on the next to blow from the new, young DIY teamuk crew. 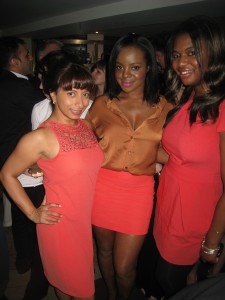 JASMINE WITH KEISHA BUCHANAN AND 3AM MIRROR GIRL SARAH TETTAH

As soon as I planted my good bye kisses on various industry cheeks at the cuckoo club, my mate and I slipped out of our heels and into our flat ballet pumps to sprint across leicester square to the uber cool IVY CLUB where in the VIP rooftop loft area they had a bar full of heaving people all eager to see grammy songstress Jennnifer Hudson sing songs from her new album ”I remember me” . Silver platters of mini hors d’oeuvres -beef tartar and quail scotch eggs were going around, as were cucumber apple martinis and other delectable beverages. Once up in there it was clear that for the second time that night the invited crowd were not your average,expected urban industry set of people that I’d expect to see at these functions usually. The room was full of A Listers from a variety of fields, global companies, music labels, actors, TV hosts, models and more. Paloma faith was doing her usual British Dita Von Teese impression in big hat and floral frock. Noisettes lead female Shingai Shoniwa was dressed like an old skool church marm in a long purple skirt and twee hat. Ex Sugababe Keisha and mirror 3AM girl Sarah Tetteh stood alongside me looked as if we’d come as a girl band in our matching coral orange outfits-you could certainly tell that summer had arrived!. Tara palmer-tomkinson arrived with her nose still looking a slight bit dodgy after all the wear and tear its had. Lisa Snowdon had al the paparazzi snapping away and designer Julien MacDonald held court in the corner. Jennifer finally came onstage when the room was hot, heaving and happy from mingling and drinking. She was rocking a long silky straight weave and wearing a horizontal stripy blue and brown dress that showed off her legs to their full and showed how svelte she was after her healthy eating , fitness regime and no doubt also the tragedy that befell her family a couple of years ago. J Hud  was accompanied by a couple of backing vocalists and a pianist and sang her heart out showing she’s lost none of her belting , powerhouse vocals that first came to light in the Dreamgirls where she blew Beyonce out of the water. She sang song after song that had us all pretty mesmerised by her lyrical dexterity and emotion and had us all eating out of her hand such was the special vibe of this intimate moment. A truly amazing night full of great musicians and shows once again why whilst i’m always TEAMUK, I’m such a lover of our capital city- unashamed and proud-LONDON RULES!