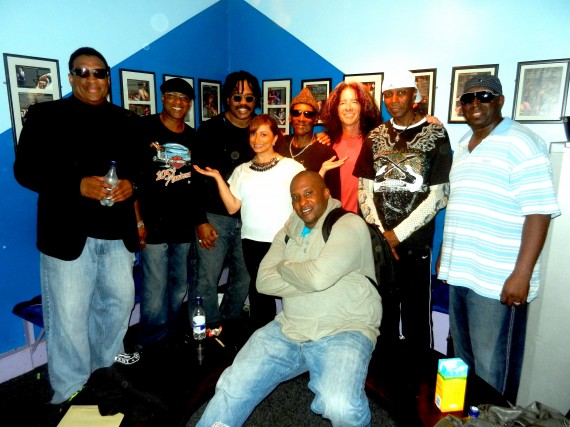 JASMINE WITH CAMEO AFTER THEIR SHOW, AT THE LEGENDARY JAZZ CAFE IN CAMDEN.
My uncle Johnny is a top money honcho at eon productions that make all the James Bond movies. Over the years I hear his amazing stories and anecdotes about the heads of the company-the legendary Albert ‘’Cubby’’ Broccoli and his daughter Barbara broccoli. The making of the James Bond films always sounds so exiting, romantic, top secret and the end product is always worth it. So when uncle Johnny offered me tickets to the cast and crew screening in Leicester square early one Saturday morning a week before the film was out in the public realm, I did of course jump at the chance. I
As expected, it was amazing! Adele kicks it off with the amazing theme song, which is true divalicious belting out of a ballad in typical bond style. Ca-ching goes her and her record labels already bulging weighed down pockets!
The opening scenes are always legendary aren’t they? I recall my last favourite opening scene was in Casino Royale film when they had parkour free running showcased. This time around the film opens with motorbike stunt riding highlighted and is breath taking! From the moment it starts it sucks you in for 2 and a half whole hours and you are gripped by the action and narrative, which this time around shows the evolving of the characters in the future. The ever-present ‘’Quarterman’’/ gadget man Q is a new nerdy very young teen looking boy who has years of acting left in him. Can you imagine his contract and the retainer this young actor must be on>? He really struck lucky. Similarly the film producers had to safe guard their infamous lady boss character M played by Judi Dench. They deal with the character so that M lives on. I wont spoil it for you in case you’ve not seen it yet –but Skyfall fall doesn’t disappoint. There are the regular product placement branded scenes focusing on Aston Martin, Omega watches, Adidas sneakers, and mobile phones but all done in the best possible taste.
Watching so much action shot in the streets of London with our buildings and tube trains excited me no end-I’m a proud Londoner and seeing it portrayed in movies like this makes me see that we can easily stand strong and equal against big bucks cities like new york on the world movie stage.
The 2 main young lead actress roles were cast to women of colour- a black woman-Naomi Harris and an Asian woman- Berenice Marlohe. That’s a huge deal in this day and age! My only gripe was I felt the females didn’t have as much sexy time and glamorous looks as in the past. I imagine the producers tried to keep with the diplomat themes of the current austerity themes. Oh well, I guess even Bond has to tighten his belt sometimes and get all A Team in the ‘’make your own weapons’’ moments! lol

Then all roads led for a whole week to Camden’s legendary Jazz Café for the much-awaited Cameo shows. I realised I’d been attending shows there now for 20 years and nothings changed in there. Same stage, same bar, same food on the menu. But it’s good and works.
Cameo were on fire! All their shows were sold out and nothing disappointed. Lead man known worldwide for his bright red cod piece- Larry Blackmon and the main vocalist Tomi were as strong as they ever were. The whole band was tight, sounded well rehearsed (the drummers solo wa impressive as hell!) and exactly as they did on record of not stronger. The members all dressed up in an array of crazy masks and capes as brilliant as Gene Simmons and Kiss costumes, and of course we all cheered when Larry took his place onstage with leather trousers and codpiece. All the press had been warned earlier to refer to him only as ‘’Mister Blackmon’’. Oh how I laughed! A male diva in an ocean of females. Hilarious! Also- as mister Blackmon walked past my dinner table, my industry pals and I gawped as we took in the size of his quite rotund, protruding butt. Honesty-it’s the biggest, juiciest ass on a male I’ve ever seen!
Mister Blackmon seemed a lot more serious than you’d imagine and warned his fans in the audience that they had better ‘’Buy Cameo’s next release, don’t download it for free or live music will cease to exist!’’. His rapping was as sick as ever. I realized he had been rapping with a charismatic flow hotter than most rappers had even been born!
He did make me laugh as he sternly informed the crowd ‘’A lot of people come up here and talk shit but I wanna tell u I really love you!’’.
The band performed all the classics like ‘’single life’’ and ‘’she’s strange’’ and ‘’candy’’. Candy was an eye opener as I imagined the whole crowd would be rocking and performing the now associated candy dance to it. But they didn’t. We then realized that the demographic in the show were older than the current clubbing generation and these oldies probably didn’t realize that the electric slide was now the ‘’candy dance’’. Halfway through the song mister Blackmon asked ‘’what happened to the electric slide?’’ Quick as a flash, determined not to let the teamuk side down, myself and my peps including BBCs Jay Davidson and Adidas boss Paola Lucktung sprinted down the stairs to the ground floor, pushed and weaved our way to the front of the crowd and led the dance troupe. It wasn’t the best exhibition of London showing what it’s got but was certainly an eye opener of how unconnected the oldies can become so fast!
All was okay with the crowd though when the Cameo classic “Hanging downtown” reminded the oldies of their 2-step favourite. They all danced in unison reminiscing about Sunday early morning scrubbing up in a party in their youth (and I don’t mean washing plates after food!).
Overall it was refreshing that the whole band took on lead on vocals and speaking throughout the show and of course when my fave ‘’ Word up’’ started, I literally sang at the top of my lungs and bounded around the top floor balcony bumping people like a monkey!. Come back again cameo- the people need more nights like this!