(ALL PICS IN THIS BLOG COURTESY OF RICHARD PASCOE) 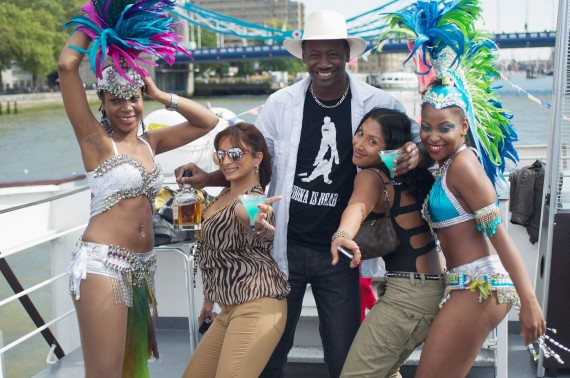 JASMINE WITH RUM CRUISE/RUMFEST AMBASSADOR IAN BURRELL AND CARNIVAL GIRLS ON THE RUM CRUISE.
This week I’ve been back in prison for the young offenders prison TV special that London360 reporters are making. I’ve had cocktails with the Arts360 reporters, I attended BAFTA to view the film GETTING CLEAN by my mates across at Livity (a youth organisation that does great things with media and young people!), and ISIS prison and mostly been juggling life’s many bouncing balls! In August, Livity ran a programme of workshops with a group of young men at ISIS Young Offenders Institute aiming to build skills, confidence and awareness of their employment options on release. Subsequently, they formed ‘ISIS Films’, and pitched the idea for a short comedy entitled ‘Getting Clean’. With a little help from award winning film crew volunteers (including director Robert Samuels and actors Pauline Pearce (the ‘Hackney Heroine’) and Darragh Mortell (the Tracy Beaker show)), footage of ‘Getting Clean’ was shot on location and returned to the prison, allowing the group to practice using their editing skills. This screening showcased the creativity and commitment demonstrated by all those involved. It was followed by a panel discussion exploring the challenges and opportunities that rose during the project, and the potential for similar models to be used to tackle reoffending rates in the future. too many of our young people are following negative paths and a disproportionate number are in prison. this event really showed how they changed peoples lives and needs the government to empower more projects like this to give youth a focus, passion and skill for life.

JASMINE WITH BRITISH SUPERMODEL TIA WARD ON THE RUM CRUISE.
It’s very rare these days to find a restaurant that’s reliable, traditional and of the highest standard. Cottons in Camden in a spot that I’ve been visiting for years. It’s renowned in the London entertainment scene for its great food, warm tropical ambience and reliability. Any TV company I’ve ever been at has cottons on speed dial for when celebs want some good old fashioned west Indian food of quality and substance. Unlike many other Caribbean food businesses that open when they like and are dead rude with their service (shout out Roti Hut in Shepherds Bush), not enough seating to always cater for customers (Mr Jerk in W1), food always runs out (Grannies in Dalson)…..Cottons is always open when it says its working hours are, always has everything on the menu and doesn’t serve up curry goat bone curry instead of meat (shout out Cottons in N1-not to be confused with Cottons in Camden-the 2 aren’t related). 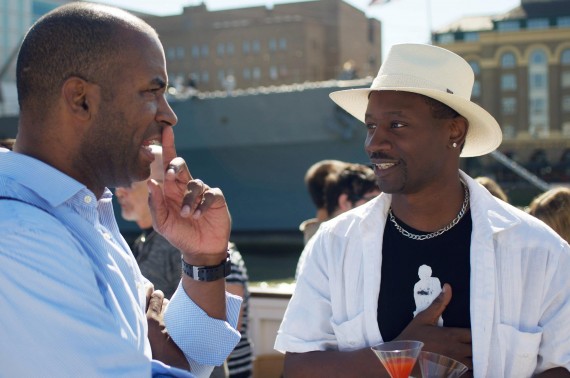 CARIBBEAN MEDIA MOGUL DOUGLAS GORDON MAKES DEALS WITH RUM AMBASSADOR IAN BURRELL ON THE RUM CRUISE.
I can call up Cottons manager Ian Burrell and book a last minute table for celebs to come and eat in the private rear seating area like I have done with Black Eyed Peas and Timbaland, or call up last minute with a big order to be delivered to a plush hotel like I’ve done with Mariah and Jay Z, or simply pop in for a last minute cosy dinner for 2 and each time the service is impeccable. So when Ian started his rum ambassador business I knew it would be on another level. A few years down the line, his rum workshops, tastings and festivals are legendary and global. He visits numerous countries where he hosts rum focused events. Ian told me ‘’ Rum is more than just a spirit, it’s a lifestyle. This is why RumFest is a lifestyle show, through the eyes of rum’’. 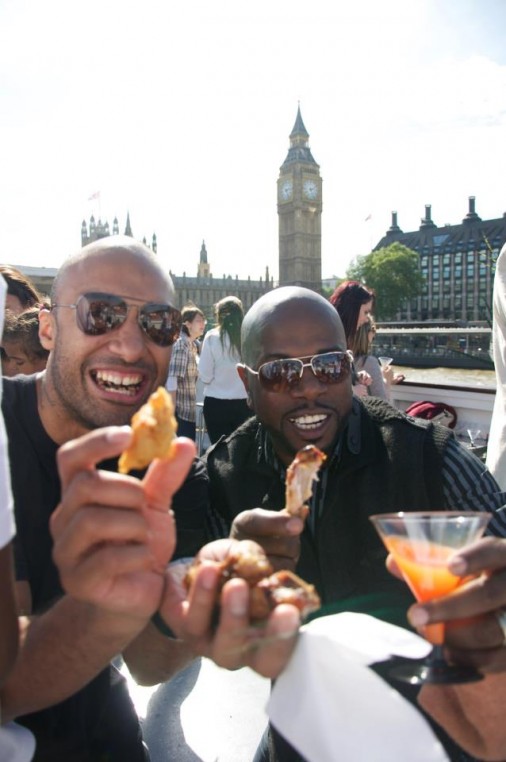 SOUTH LONDON LADS ENJOY THE CHICKEN WINGS AND RUM COCKTAILS ON THE RUM CRUISE!
His RumCruise on the Thames River is now an annual event that I’ve never been free to attend-until last week. It was the press launch for his annual rum festival- (RumFest), which this year is at The ExCel London, 1 Western Gateway. Royal Victoria Dock. London. E16 1XL, on Saturday 13th & Sunday 14th October 2012. Last year it was at Earls Court and was heaving with a diverse crowd all weekend. You may recall that as well as rum shacks and modern bars with ice sculptures all hosting rum tastings, there were carnival dancers, sound systems, live bands and…the porn legend Ron Jeremy who always attends! I took the day off work to experience the rum cruise and didn’t regret it. 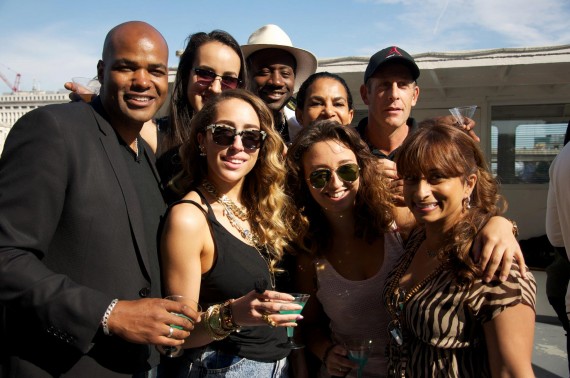 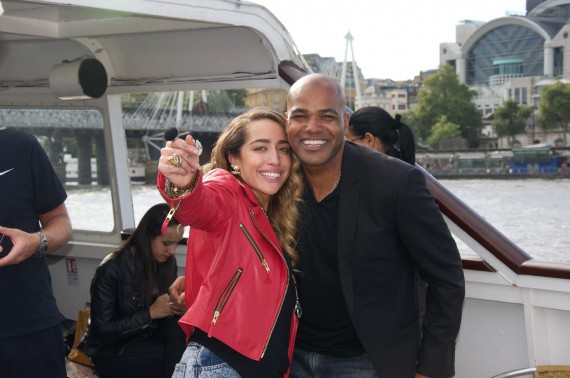 SINGER DELILAH WITH HER UNCLE-ATHLETE TURNED MEDIA MOGUL DU’AINE LADEJO.
God ensured the weather was warm and the party was on from 12noon till 4pm. the boat cruised twice the length of the Thames from the docklands, past embankment to Chelsea pier and it was breath taking to see our city from the water. The sound system played sweet summer sounds to the press, friends and family gathered, the carnival costumed ladies served rum cocktails of every coloured variety and danced with party attendees, British supermodel that the press recently became very excited about due to her beauty and brains Tia Ward attended, as did athletic legend now TV star Duaine Ladejo attended with his family, singer Delilah enjoyed the cocktails, singer song writer Michelle Escoffrey danced away, Jamaican media conglomerate Douglas Gordon and family travelled in all the way across the Atlantic to attend, it was a very unique event and a chance to experience the juxtaposition of London and rum in a way never done before- 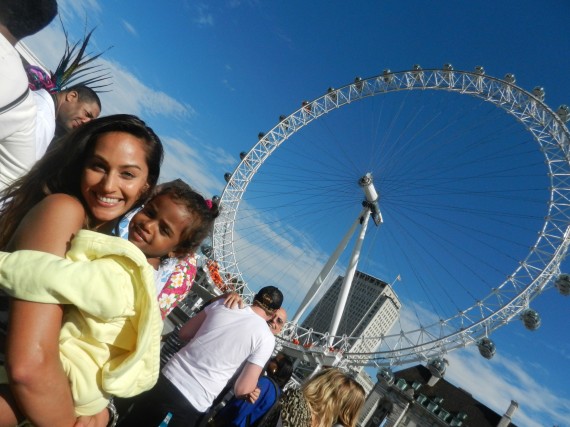 SUPERMODEL TIA WARD WITH A LIL FRIEND AT THE RUM CRUISE.

JASMINE WITH SINGER DELILAH AND LIL FRIEND ON THE RUM CRUISE. 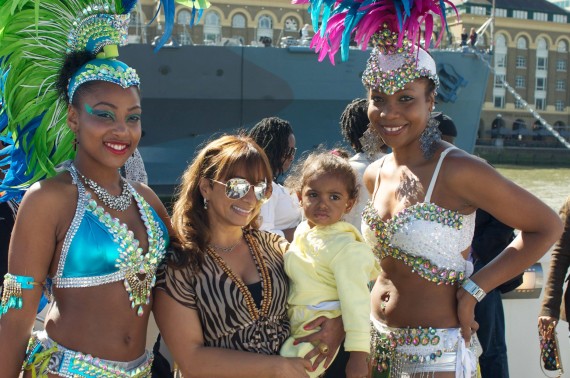 JASMINE WITH HER LIL NIECE AND CARNIVAL GIRLS ON THE RUM CRUISE.
By the end of the cruise all you could see were chicken bones in empty cocktail glasses, all you could hear was shrieking laughter and song, all you could feel was the vibration of feet on boat as the whole party did the cameo electric slide en masse! The sign of a great afternoon! See you for part 2 this weekend at Rum Fest! 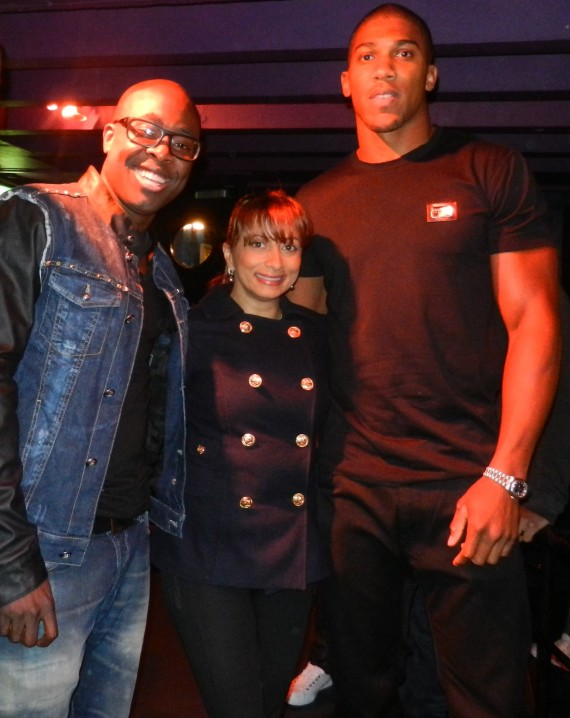 JASMINE WITH COMEDIAN KOJO AND OLYMPIC GOLD MEDALLIST ANTHONY JOSHUA.
Next radio host and comedian Kojo had his London date of his ‘Special Delivery’ comedy tour in Camden hosted by his employers CHOICEFM. On the night he was on fire with his unique wit, freestyle, quick-fire crowd heckling and ‘questions to Kojo’ sections of his show. Olympic gold medallist boxer Anthony Joshua was also in the area with us and had all the young ladies drooling and looking for an excuse to rub past him as they sashayed sexily back and forth. Also In the VIP with me was singer Alexandra Burke who was there with her sister and friends. It was her sister’s birthday and at the end of the night a cake was brought onstage as the 2 sisters wiggled on in their tight foxy dresses and heels to blow out the candles (which Alexandra had forgotten to bring!).