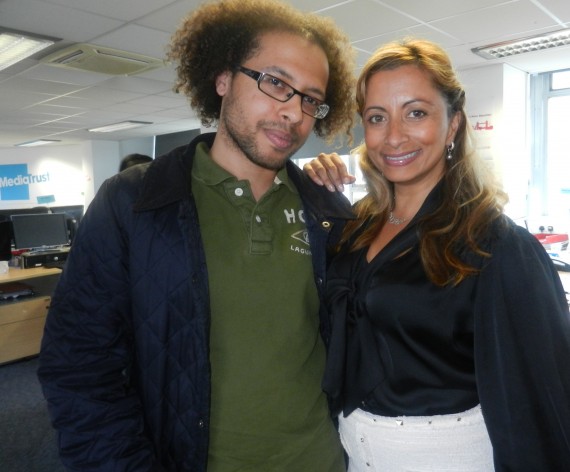 JASMINE WITH POET, MUSICIAN AND ACTIVIST-DEAN ATTA!.
An urgent need to curb my enthusiasm for experiencing the more fab things in life this month as my credit card takes a bettering from all the ‘’great deals to be had’’ type e mails I get bombarded with daily. From Groupon to Book a Table and more, I am easily tempted by having a 5 course meal at the top rated Michelin starred restaurant for £30 a head instead of $£100, and so scrabble to book. Of course on the night my dinner for 2 for around £60 ends up being nearer the £100 mark and I look quizzically at my bill wondering where it all went wrong lol.
So yes I did enjoy dinner at the Shard and dinner at the Suka bar at the Sanderson Hotel but I will be shopping at Lidl’s all month to make up for it.

A Summer like no other was launched with the Mayor and his team at City Hall. I accompanied my London360 reporting team to go and find out all about it. In a nutshell, this summer there are loads of free events being organized by City Hall across the country that are once in a lifetime experiences and inclusive to anyone and everyone. Its not often we get something from nothing so log on and get informed on stuff happening right on your doorstep! Boris Johnson’s deputy mayor for education and culture- Munira Mirza- told us to expect a summer like no other in 2012. Leading organizations like the English National Ballet, the Royal Opera House, the ICA and more have been commissioned to arrange a world-class programme of events to celebrate the 2012 games. From giant dinosaurs charging through London’s streets to thrilling ariel displays, all 33 of London’s boroughs are in for a treat. At the launch 16 athletic dancers performed with Tower Bridge in the background by traversing buildings and making us draw breath at their skills. Artists like Andy Warhol and David Hockney transformed vintage BMW cars-16 in total-. It was interesting to watch car lovers that aren’t usually into art now take an interest in the painted vehicles on display. Other exclusive announcements included a ballet water show at the Uxbridge Lido and Hampton Lido, and performances in Woolwich, Southwark and Redbridge. Boris also revealed that on each night of the Olympics and Paralympics, iconic images of the games will be projected along the Houses of Parliament and every 15 minutes will offer a wonderful photo opportunity! You know we Brits can put on a great show after the Diamond Jubilee so get involved! We are all British resident’s whose ancestors and hard work has contributed to the greatness of making this country what it is. We should celebrate and take advantage of all the happenings across our capital this summer-after all our taxes are helping pay for it!

Next I was scooped up by Addison Lee and dropped off at the Southwark based OHTV Studios where talk show donette Trish Adudu was expecting me to join her ‘’Real Talk’’ show panel. (Sky 199). I love a good debate and am not afraid to be honest in public so its always fun to get involved. This week my co-panelists were rapper and activist Ty and body image guru Natasha Devon (bodygossip.com). We discussed the fact that teenage British girls are now the highest drinkers in their age group across Europe, whether or not tattoos are a good idea, whether young people should wear hoodies and why black families don’t holiday in the British countryside or go skiing. Make sure to catch it online if you’d like to watch again. 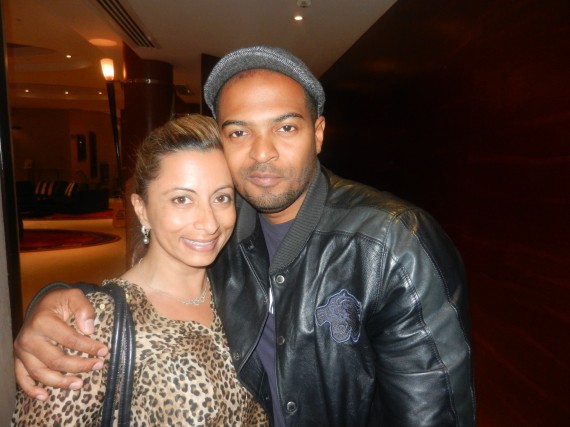 JASMINE WITH HER FRIEND-ACTOR, DIRECTOR, PRODUCER, SCREEN WRITER-NOEL CLARKE!
I attended the private screening for actor, producer, and director Noel Clarkes latest film STORAGE24 that saw us all jumping and screaming as aliens take over a storage unit in Battersea in South West London! Noel really is breaking boundaries by experimenting with a number of film genres and opening up the movie world and its industry to a more diverse way of thinking. He really is this country’s Spike Lee, Tyler Perry and Will Smith rolled into one!. 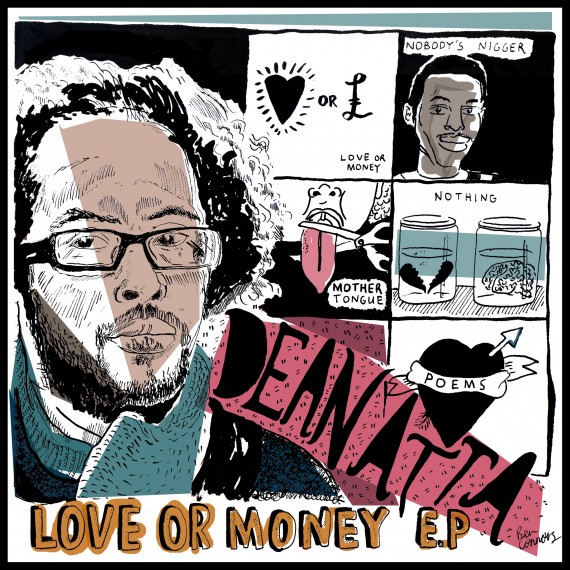 DEAN ATTA’S NEW EP ARTWORK FOR ‘LOVE OR MONEY’
In a week where there was a universal buzz about American sing songwriter Frank Ocean coming out of the closet and revealing his sexuality, I wondered why we were still unable to fully accept people with different diverse ways of life in today’s modern world?
Our very own talented British young man that’s great at articulating himself and has been doing for a while now on the LGBT scene is Dean Atta. Like me, born in central Middlesex hospital in Wembley we joked that when we were born we heard the applause and cheers from the nearby stadium and so have found attention seeking throughout our lives a natural way of life.
Dean was on a high after having just won the London Poetry Award at the London Awards for Art and Performance 2012 at One Aldwych Hotel on Tuesday 20th June 2012.
This young spoken word talent is slowly but surely breeding a multitude of fans and a following in the capital that love his fearless, outspoken opinions. Dean has been praised by many movers and shakers like RWD magazine and MP David Lammy that know talent when they see it. “Dean Atta is the Gil Scott Heron of his generation”. “Unafraid to tackle topics other poets turn a blind eye to”. “His poems are priceless”. “Can someone give Dean Atta a serious book deal? Fantastic emerging talent.”
I first became aware of Dean after there was a huge twitter buzz about his poem ‘’I am nobody’s nigger’’. Then I saw he was an outspoken force and champion for gay rights. Suddenly he’s everywhere! 27 year old Dean popped up to the BBC building to speak to me about his new exciting 3rd EP called ‘’Love or Money’’ most of which is acoustic featuring guitars and live cello and drums.

He explained to me that even though he had performed a lot as a child in the Silvia Young School, in West End plays like Oliver and more, and that his 1st big break was with his poetry on BBC Radio 4 stating that ‘’Poetry is inclusive to all and I love to see diverse voices onstage and poetry arenas at music festivals’’. Dean is surprised that the mainstream have embraced him ‘’the BBC have been amazing. Also I did a short Channel 4 3 min wonder slot and I am now working on one of their ‘’Random act’’ slots so it’s a great time’’. I am not surprised the mainstream print press, radio and TV are embracing him. He speaks for a vast number of young people living in fear due to their sexuality and of course these minority voices need a platform and in dean they have found a fearless crusader. He ticks their entire diversity quota (young, black male, gay)-of course he is sought after.

Dean studied philosophy and English at university in Brighton and only realized being black was a big deal when he ended up becoming president of the African Caribbean society there!. Now he performs numerous shows across the country at open mic sessions and noted that many of his friends are MC’s but he gravitated towards poetry more, admitting that he was put off by hip-hop’s homophobia. He recently featured in the Radio1Xtra No Homo documentary as well as collaborating with filmmakers for MTV and SBTV on his ground breaking spoken word piece “I’m nobodies nigger”.
He has managed to make his new EP “Love or money” (released July 30th, people can download it from deanatta.bandcamp.com but you can listen to it now at soundcloud.com/deanatta) with mutual minded friends with no budget but on a mission of love explaining ‘’Some folk are put off by no funding but I always find another way to make my work exist’’.
Dean feels humbled by the fact that other artists and musicians gravitate towards his projects as they appreciate his stance. His EP is short with only 5 tracks but clearly it’s about quality not quantity. Its also being delivered to us as a free download not to make him money but to raise awareness on issues he feel’s we need to talk about.
It was interesting to hear about the tracks on the album as they are all very interesting debates that dean has lived through. His title track ‘Love or Money’ questions ‘Why are you doing what you do?’. Dean plea’s “There’s a recession of love and no one is paying the debt”.
His song “Mother tongue” is about not speaking your parent’s language. His mum is Greek but when he went back to Cyprus he found he didn’t understand or fit in, as he was frustrated at not speaking his mother tongue. So they started doing Greek class together. The 3rd track is his widely acclaimed work ‘nobody’s nigger’ which is now set to music with fellow musician Ayanna on cello. Track 4 is titled ‘nothing’ about the end of a relationship. The final track 5 is called ‘’poems’’ and talks about not wanting to write poems about someone.
Dean is not just seen at festivals and open mic sessions across the UK, he has a part time job as a freelance workshop facilitator, and he’s just had a poetry book published titled “We Come From” which is an anthology of poems edited by Dean but written by 90 young people from his workshops http://www.amazon.co.uk/dp/0956320333
Dean enthused ‘’ for any person between 18-30 that say there’s nothing out there for them the creative world is open to you and its so easy to get your stuff out and your voice heard out there. Youth with something to say should just get it out there!’’.
Dean who is also a Spirit of London awards ambassador admits his future dreams are big but realistic.He aspires to publish a collection of his own poetry and sign a deal with XL Records by 2013.

I finished the week at the annual Wireless Festival in Hyde Park where i inwardedly scolded David Haye for eating rice a wek before his big fight, ran amok with Misha B and took refuge from the rain under Rihanna’s….no, not umbrella-her massive black curly hair wig!-more on that in next week’s juice.