The cream of British hip-hop pioneers all got together at Camden’s jazz café to perform for a charity event raising awareness of Autism. On the line up were Banana Klan Sound System ft. Roots Manuva, Blak Twang, Skinnyman, Klashnekoff, Rodney P & Skitz, MC D, Mr. Ti2bs, DJ Big Ted, DJ’S Alex & Alec Twin B (Radio 1/1Xtra) and a full house of supportive fans. It was the second charity event of its kind the never seen before line-up showcased brand new material alongside hip hop classics from Roots Manuva, Blak Twang, Skinnyman, Klashnekoff, Rodney P and MC D. The night was hosted by Rapscallion and Rodney P and one of the acts on the bill- MC D actually wrote a track titled ‘Autistic’ for the ZAN charity event, which celebrated the ‘difference not indifference’ of Autism and dispelled important misconceptions. In the packed house alongside me upstairs were the legendary artist, presenter and DJ Normski, Charlie Sloth, rapper Sway and his crew, Black the Ripper, song writer roses gabour, one time MC now artist manager JP and as usual where there’s hip-hop you will find hiphop visual capturer paul h.

As is often the case with events like these, its when a family member or close friend is diagnosed with something that people want to bring awareness and support to it and so it came to be that the charity -Zain’s Autism Network (ZAN) -was founded in 2006 by Matt Robinson father of four and film maker whose eldest son Zain has ASD (Autistic Spectrum Disorder). ZAN raises funds for charities who are involved with Zain’s ongoing therapy and treatment.

Back in 2001 Matt Robinson’s love of hip-hop inspired him to make a documentary about the then UK hip hop scene. While filming, Matt developed friendships with some of the artists he interviewed such as Rodney P & Skitz, Skinny Man and MC D. Fortunately for Matt these artists embraced the opportunity to support him and his family’s cause and are wholeheartedly spearheading the second ZAN charity event. Matt expresses his overwhelming appreciation saying: “stepping up to support this cause is a great reflection of how the UK hip hop community, truly care about such important and wide reaching issues”

All the acts were given about 20 minutes to do their thing in which they performed their classics as well as new material but it was Tony Rotten aka Black Twang who got a little emotional onstage as he told us that he has a child that is mildly affected by autism. Tony then tore the house down as he told us ‘’tonight will go down in history as one of the most positive things that we ever did as a scene and a movement in the UK. It was truly emotional, but I believe most people will leave the Jazz cafe inspired tonight. I’m just glad I was able to contribute towards such a brilliant occasion and we were able to achieve what we set out to do.’ His peer Rodney P added ‘’You know when you get talking with people and it seems everyone you mention Autism to has someone they know or someone in their family that has Autism – it’s something that has affected my family so this is a great cause that I believe in.

Clearly the night was an eye opener for many including myself, and whilst we were blown away by the acts onstage and their passion for the charity, the artists themselves were blown away by the night themselves. They were in awe of each other and so proud to be on the same bill together – this event was been deep on some many levels: Hip Hop, and the old skool coming together like never before – the cause and how affected the artists and other people are by Autism – the night was so popular that there is now talk of them touring it to major uk cities. .

Next up, the now regular Comedy Roast at West London’s Shepherds Bush Empire was sold out and rammed from tip to bottom. This night was to ‘’roast’’ actor and comedian Robbie Gee. I have to admit I underestimated how many Robbie fans there would be. As I arrived the venue was heaving inside with plenty more struggling to get in the door-it was totally sold out! From his days on legendary TV black comedy show Desmond’s and many an internationally acclaimed movie like snatch and many more the anticipation before the night began was huge. The first half was hosted by old skool comic Curtis walker who was actually much funnier than I recall him being in the past.

Each of the roasters-(comics that were going to cuss Robbie)-did a quick set in the first half. They consisted of Annette, Special P, Kane Brown, Little Man, and Robbie’s long time partner in comedy- Eddie Nestor.

Kane Brown who I’ve seen a few times before on a variety of other bills has come on leaps and bounds and his confidence and delivery were spot on.

A female comic from Birmingham called Annette was painfully unfunny. Her shtick sounded like a written in stone set that was awkwardly unfunny and had the audience restless until they finally started heckling her. She stood her ground though and persevered through it. ‘‘Perhaps Birmingham humour doesn’t translate down here?’’ I defended her ,but all around me the crowd hated it.

Next a singer called Dele came strutting on – most of the audience weren’t sure whether this singer was a part of the comedy part of the show as he was hencher than 50 Cent and then when he sang this little, high pitched shriek emerged. He was vocally very adept but still seemed a little comical with his very Jodeci wannabee moves.

American comic Will E Robo was only onstage briefly but totally stole the show with his a class impressions as usual, he cussed Welsh accents, ridiculed dele-as we knew he would- his set really stood out with the audience on a whole new energy with him, American comics just really are on another level with their delivery and content.

Part 2 was the part we were all waiting for….the Robbie roast. Richard Blackwood was hosting this part and was actually very impressive with his quick comebacks and constantly on point cusses-good job Rich!.

The roasters are supposed to come up and diss each other as well as main subject Robbie.

Robbie entered the stage wearing a well cut suit alongside incongruous huge furry hat and huge, giant furry animal paw slippers, he was chewing gum hard and sipping brandy straight from the bottle and poured each roaster some and kept the ghetto side real by pouring a splash on the floor too.

Annette and Special P weren’t really experienced enough to get the roast going in that no holds barred way we’re used to. (Get Jason Lewis back!) Annette tried to rely on her femininity and was particularly vulgar making the audience squirm unimpressed as opposed to laugh.  But Kane stepped up the standards. Most of the comics cusses were predictable, especially when it came to Annette’s visually challenged looks and her wigs kept getting flack, with one comic- Kane- actually ripping it off her head and flinging it into the crowd. Clearly having expected it, Annette had brought a whole bag full of wigs and calmly popped another onto her very embarrassed head.

During the first couple of comics Robbie gee kept an absolutely expressionless, straight poker face, but when Kane brown likened his head shape to his apparently adjoined twin, Robbie couldn’t help skin teeth and bust out laughing. The final roast of the night was left to Robbie’s mate Eddie who stepped up the show to a 5 star cuss moment, as he told Lil Man to stop buying his clothes at Primark, told Kane he was gay for looking at other men’s privates, told us he had love for Richard Blackwood and helped him go collecting cash when he went bankrupt, and then he went in for the kill by telling us that you could tell where Robbie gee was in his life by the baby mama he was with in each year, he stuck in the sword deeper by revealing that Robbie once gave baby mama number 2 cast off clothes from baby mama number ones child. Lord! The crowd went wild and it was a wrap. Finally Robbie himself took to the stage to comment on each of the roasters. He showed why he’s a legend with quick wit as he literally tore every apart and had the whole audience on all 4 levels ceiling to floor laughing their asses off. A great night on a very professional level!

Once upon a time events like this were usually badly organised but organiser ALPO has with his comedy roasts changed this perception and the slickness of the night with its very professional backstage crews, huge video screens, props , set and lighting is to be applauded. Bring on the next one soon! People I’d love to see roasted are; Audley Harrison, Mel B, Wiley, Alexandra Burke, Dane Bowers, Tim Westwood, Dizzee Rascal, Reggie Yates, and Lethal B. 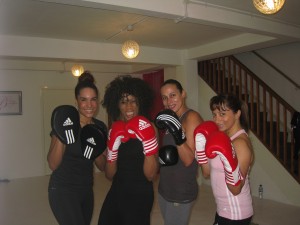 JASMINE with her girls and LESLEY SACKEY (far left) at the Boxing Boutique. www.theboxingboutique.com

I finished the week with a healthy session with female boxer Lesley Sackey at her newly set up Boxing Boutique in the City right next to Shoreditch House with a group of my girl friends. Lesley put us through our paces with a brisk warm up, taught us how to throw a ranch of punches and ended with a stretch session that had us all pumped up and ready to take on the world. A really good idea for groups of friends or one on one session if you’re looking to get fighting fit for the summer!