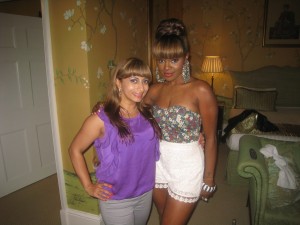 Lead Sugababes singer Keisha Buchanan invited me to her first solo outing in conjunction with Jacques cider who took over a beautiful town house mansion in Central London to celebrate the opening of a new super stylish Jacques townhouse. As I walked in past the paparazzi board where young starlets were being papped surrounded by eager pr people gushing at each other. We stepped into the main front room where an actual Mini beauty spa was full pelt ahead with one corner where girls were having their make up done, another areas with crazy manicures, a third area with massages. I whooped (out loud embarrassingly!) and started my own mini make over. Half way through a manicure alongside Asian singing and acting sensation Preeya Kalidas, the D&G ladies Ruth and Chandni and PR Maven Jennifer Mills, I spotted a man I knew in this sea of women…it was none other than JLS sensation Oritse with his vivacious and excited girl group Vida who told me that Ortise was a hard boss to please but was whipping them into chart topping shape. 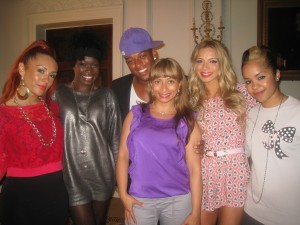 JASMINE WITH JLS ORITSE AND HIS GIRL GROUP VIDA

We had a fun chat before I sprinted into the next room where they were playing croquet like the olden days, I chucked something at something else but it wasn’t really my thing so I grabbed a Jacques cocktail from the sea of coloured champagne flutes and dashed upstairs to see what else this fabulous night had in store for me. 30 seconds later I was sitting across from MTV VJ Laura Whitmore making cupcakes and decorating them with spinkles! After calling someone and asking if they wanted the mini piece of art cake I’d made for them-and he replied ‘’I’m not eating that-I’m on a diet!’’ my girl friend Anneliese and I wolfed it down us and swanned off to the room next door where a fun dressing up room awaited us with rails of costumes and olde worlde outfits and a surreal set where a photographer from Japanese vogue was snapping away pictures for us all. I stripped and jumped into an old ‘’little house on the prairie’’ outfit and we giggled and posed for the snapper before running back downstairs for the main event which was seeing Keisha perform. A packed room full of power players and taste makers including actress Jamie Winstone (who looked stunning in her dress up wedding dress), watched as Keisha belted out hit song after hit song both from her new and old repertoire and boy did she sound and look hot! Her vocals were thundering dynamic and the crowd was singing along and clapping as though they were at a festival! Welcome back solo star Keisha! 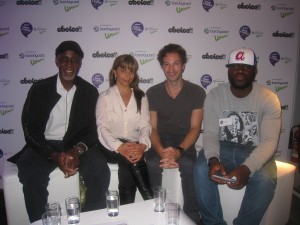 JASMINE ON THE COICEFM ”I HAVE A CHOICE” PANEL.
I was invited to sit on a music panel for CHOICEFM at Wembley arena.The Get known Get Paid event in association with charity partners Catch 22 and V-inspired , was about independent and aspiring performers finding out how to promote themselves, market themselves, make money, get in the press and more .The audience were aged 16 -25 and most were interested in getting into the music industry but didn’t have a clear direction as to what avenue they want to pursue.  The purpose of the panel was to give some practical information/inspirational stories and tips on getting known professionally. On my panel were representatives from GRIMEDAILY-(Posty), the PRS (Jules parker) , the PPL (Keith Harris) and DJ KC who was chairing. The next panel included wretch 32, SONG WRITERS PARKER AND JAMES, a member of N-Dubz management and CHOICEFM’s breakfast show hosts Kojo &Max.
Its always-special meeting young ambitious people but there’s so much many of them have to learn. When I was at school generic things like ‘how to write a formal letter’, how to dress for an interview and ‘how to research a company’ were mandatory. Nowadays its tough as young people are scared to stand out and be seen as an individual and can resort lazily to the jeans, trainers and hoodie combo for every event in life. We talked about how to focus on marketing your self. Things like professional email addresses can make or break you. I’ve had e-mails with things like ‘’murdergangster1’’ in the title. Do you think most serious people will reply to that? I’ve been sent to check out websites with porn titles. Do you think business people will take that seriously? This very week I was asked for feedback on a track titled ‘’seed from my scrotum’’. Yes. Really. Lyrics of songs should be unique but there’s a thin line between unique and unworkable. Many young acts think they can be amazing in their bedroom studios with a few pressed CD’s. if you don’t perform live at regular known music events like I LUV LIVE how can you get experience, create buzz and build a following?
Do you also understand the power of collaboration? The right musical partnership can open a million doors for you. Shout out Labrynth!
Also- even if your friends say you’re potentially the next jay z-be honest with yourself. Are you truly amazingly talented or are your friends gassing you? Honestly-I’ve been told countless times that someone’s amazing and they don’t sound different to anything that was already rejected years ago! How much do you know about the business? Tinie Tempah’s cousin Dumi knew nothing but he read all about the music business from a book and taught himself about why you must know about and sign up to the PPL/ PRS. These events are brilliant for immediate question and answer sessions but really you have to do a lot of the research yourself and now with everything being online there’s no excuse to cry ‘’doors are shut’’. Even I learn new things whilst being on the panel. Keith Harris had an amazingly easily understand explanation of the PRS and PPL that’s always confused me in the past.  I even got into passionate debates about things with my fellow panelists such was the importance of what we all believed in!. As if that wasn’t all entertaining enough for the attendees, DJ Maso from De La Soul made an impromptu appearance along with Black Twang-the perfect day! 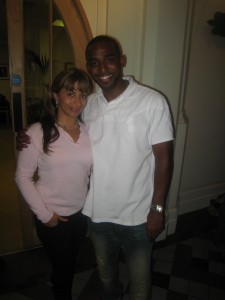 JASMINE WITH DARREN RAYMOND AT THE INTERMISSION THEATRE.
Next it was off to the Intermission Theatre show at St Saviours Church right next door to Harrods in Knightsbridge where I had been invited by artistic director Darren Raymond to see 10-10-10 which was 10 mini plays lasting 10 minutes each. This night gives opportunities to new writers, directors and actors to showcase their talents. The professional theatre and youth theatre there reaches out to young people at risk and nurtures and supports upcoming acting talent. In all honesty I wasn’t sure what to expect. In the shadow of Harrods I expected very hoity toity church goers but the evening was a pleasant surprise where I was excited to witness so much new young urban talent making in roads in big places. The plays were very well written and directed with the most basic black set and minimal props. The themes were modern and hard-hitting. I recognised a few actors from their roles in already established urban UK films so it was nice to see they were as strong in a live set as well as film. I think this production should tour around London-many of the mini plays would even be great filmed for black history month! Watch this space- young thespians do your thing-you’re about to blow up! 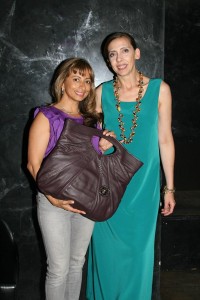 Finally I attended a very special fashion event organized by LGN Events and was introduced to a fabulous new handbag designer called Letizia Morandi, who has previously worked with some of the world’s top fashion designer’s, including Jimmy Choo. I was invited into the VIP Celebrity Gifting Lounge by Gossip Girl PR and received a wonderful new designer handbag, which I adore. Check out Letizia’s new and exclusive designer handbag collection at  www.letiziamorandi.com, which is bound to attract many celebrity clients.