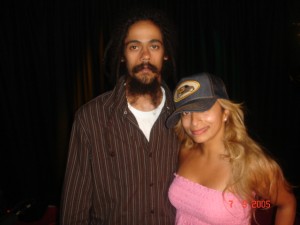 All roads led to Wembley Arena last week for the much-anticipated concert seeing 2 musical brothers come together again. after last years Nas and Damien Marley joint onstage show people had heard this was a once in a lifetime event and a slow moving cavalcade of cars crawled up to Wembley on a balmy spring night. As if the main acts weren’t a big enough draw we were informed also that the inimitable Erykah Badu would be the opening act so we were ampted. Well promoter Hanif had one more surprise for the crowd- Spragga Benz was the first act on. Could this line-up be any better.

Once we actually managed to navigate the extra long queues outside we noted that Wembley arena was totally rammed up with fans and a great party atmosphere. 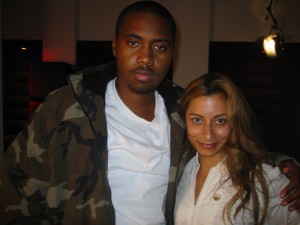 Spragga and Erykah did their thing throwing out all their classic hits and setting off the night correctly then the crowd went nuts as bobs son Damien entered the arena and his locks were swinging wildly non stop throughout his set. But much of the crowd were as impressed by the man waving the huge flag throughout the show. we were fascinated by his arm strength and couldn’t stop watching as he mesmerised us all. Even female boxer Lesley sackey who was in the crowd was speechless with awe. Nas and Damien rocked the crowd in such a positive, old skool , fun way that it brought back faith in modern music showing it could be both hot and positive in this day and age when much of it often leaves a lot of musicality to be desired.

There was a tea area located at the back of the store for guests to sit down and shill out, the bloggers were active in the windows re vamping the mannequins, guests went crazy dancing to Rihanna’s What’s My Name track and Madonna’s Like A Prayer track. On the Menu was a SICILIAN ROTISSERIE which included Potato croquettes, Rice croquettes stuffed with various meats and cheese, Fritters of codfish and “Panella” chick peas flour fritters. Guests were from all walks of life and looked totally outrageous, with people from all different cultures but all involved in some kind of thought of fashion. If you had any concerns about deciding what to wear on a night like this before leaving home all was in safe hands as this definitely wasn’t one of those nights to worry about what you were wearing or feel anyhow uncomfortable. From People dressed to the hilt galore in designer such as D&G to LV and Christian Louboutins to name just a few to your normal day-to-day wear of t-shirts, jeans with kicks or sneakers. Continuous hors d’oeuvres, cocktails and champagne were at arms reach through the night which meant that every sensory function was satisfied from hunger, thirst, audio and visual entertainment via the life action dressing fashion bloggers – a great, progressive, unique night-kudos D&G and their celeb fashion team Chandni and Ruth.

After these 2 fabulous bits of entertaining fabulosity you know the universe balanced up my work-play karma by giving me two subsequent weekends of work. The first week saw me driving through the madness of the central London TUC marches to get to south bank university where I was sitting on a panel for the regular INSPIRATIONAL YOU quarterly motivational conference.  The MOTIVATIONAL YOU team alongside founder Sonia Meggie, provide workshops, seminars, exhibitors’ stands and networking opportunities. I’d heard about this event in the past and was finally happy to get involved speaking to ambitious young women and young people where they can connect with industry professionals and successful entrepreneurs. Giving back to the community regularly like this makes me feel better when I cant afford to give regularly to charity. After all, quality time and attention is really what young people need. The event was buzzing and full of energised people when I arrived. I saw in on a journalism panel and then entered the main arena for my panel, which was most fun as my fellow panellists were a TV presenter and actress. The youngsters in the audience asked a multitude of interesting questions that gave me faith that our future was in good hands. 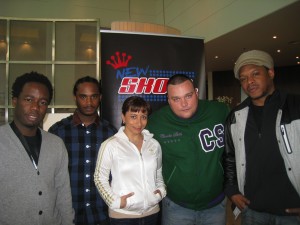 The following weekend I got the blessing from my mother to miss Mothers Day and fly to Rotterdam for the largest international urban music conference NEW SKOOL RULES where I was sitting and speaking on 2 panels over the weekend. I joined a strong industry team from the UK which included radio 1xtra dj and artist Charlie sloth, island records A&R man ben scars, flava magazine editor and founder annika allen and Leonard foster, Andrew davis former myspace don now freelance international advisor to international brands and more. Established delegates had been flown in from all over the world including from the USA MTV VJ and radio host Sway Calloway, Grammy winning song writer Bryan Michael Cox, and current hot producer Drumma Boy. Over a 3 day period there were a lot of panels, workshops , showcases (including the UKs very own black the ripper , R.I.O, and R.T.I ) and master classes in everything one could ever hope to know learn to make it in the music industry. Whilst the day time saw learning and networking opportunities, the evening held club events where yet more showcases from established and new acts took place. It was a great experience and definitely an event with aot of future potential . but for now I think it has a long way to go. It seems that the Netherlands government pay a substantial amount of money to throw the event- 80,000 euros in funding with the overall project costing more than 150,000 euro’s so a lot of passionate people behind the scenes making it work. And the locations and panellists are incredible, so it seems very disheartening that even though in total there were 976 people attending from 31 countries, each panel that i witnessed individually only held around 20-30 maximum young people. A total change from the urban music seminars I’ve been used to attending in the uk in the past where there are thousands of eager attendees. I heard that NEW SKOOL RULES attendees have to pay 150 euros to attend for the weekend, which seemed unfair to people struggling to get into the game. Lets bring it to London and make it free to attend and take this to the heights it deserves to be.