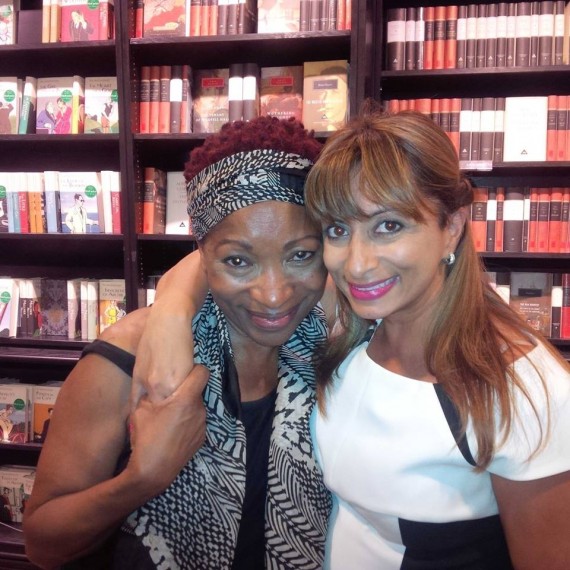 She’s the American British playwright, novelist, critic and intellectual who’s acted on Parisian stages, had her plays performed on multi broadcast platforms, produced films, written novels, as well as regular features in The Guardian and Huffington Post, served on boards for universities, opera houses, film schools and more. But in 2009 she flew crashing into a whole new generations psyche when she made BNP’s Nick Griffin look even stupider than usual on BBC’s Question Time, after she stepped into the verbal ring with him and slapped him around until he was trembling. My bad. He was trembling even before Bonnie started on him.

She’s accomplished much at the age of 65 and clearly the constant campaigning for people to have a voice, diversity in arts and culture and equality for all hasn’t aged her. If anything she looks younger than ever. Black don’t crack isn’t just a saying thrown around. It’s a fact of life.

Last night at the most beautiful bookstore in London’s Mayfair- Hatchards- Bonnie read chapters from her new book, a memoir titled A Parallel Life. Understated in her actors uniform of basic black vest and trousers and her trademark headscarf, Bonnie welcomed an invited audience to hear her read especially chosen chapters from her memoir, in her very distinctive, calm, warm, measured, velvety Chicago drawl. 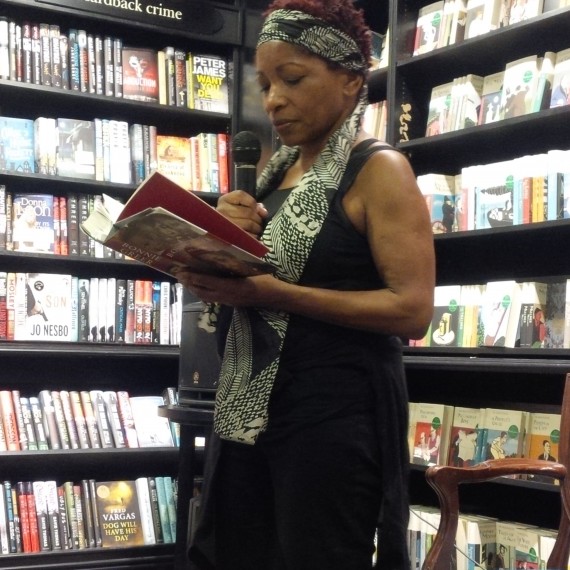 BONNIE READS CHAPTERS FROM HER BOOK ‘A PARALLEL LIFE’.

Stories of her father Ben, a factory worker who took part in the D Day landings and was fascinated by the world war two Jamaican soldiers who fought for Britain. ‘’ My father was a union man. He’d take us to museums and was adamant about education as a way to get yourself up and out. He strongly believed in equal education and culture for everybody. ‘’ And mother Willie Mae, a housewife who in later life suffered with dementia, which meant she spilt all their family secrets to Bonnie in more chatty, rambling moments.

Bonnie is cool about it though, not much phases her. Although she began writing plays at the age of 9, she originally set out on a legal career, but dropped out when her professor told her he didn’t think women should have a career in law. Growing up in Chicago means she’s a tough, straight talker and her life in the emotionally open theatrical world means she has no hang-ups. She shrugged ‘’I’m from the theatre so I learned you gotta let stuff go’’.

In her book, Bonnie is open and honest about her upbringing, her sexual encounters, her struggle with an identity that was constantly quashed and a self-belief that was forever being challenged. She unveils secrets, personal angst and a hugely heroic battle to change what she was ‘supposed to be’ to become what she wanted to be. Her best friends succumbed to AIDS; she watched colleagues die for their beliefs; she saw her city and her dreams torn apart by the Chicago police. Bonnie bares all in this first volume of her memoirs, and you cannot fail to be moved, touched and even angered by what you are about to read. Bonnie’s experiences have driven her firm resolve to fight for civil rights. She was the ‘poster girl’ for the Nigerian schoolgirls long before their plight hit the papers; she is political, controversial, determined but, above all, she’s a woman who believes in equality. This is her story. And just the beginning.

She explained that once the book publishers had convinced her to write this book, she was extremely grateful to have a voice as a black woman, that hadn’t come from a tragic life story. ‘’I didn’t want to write from the point of view of an emergency. Most of the work we get published (as black women), are like emergency rations. No deaths or tragedies make me journey who I am. I grew up in the era of fascinating movements unfolding and developing around me. The black panther movement, black power movement, arts and theatre were exploding in new ways, the gay movement…. all these are what I talk about from my point of view’’.

If you Google Bonnie, alongside ‘’husband’’, ‘Nick Griffin’’ and ‘’university’’ is ‘‘racist’’, which uninformed online readers accuse her of being when she defends the black community. Yes, if you take her quotes out of context she probably does sound racist. However, in context you can see and hear the humorous, cutting, sarcastic tone in her voice and it makes sense.

She’s defended the ‘angry black woman’ stereotype and women’s right to have an equal voice. She sits back and observes academy award winning actress Lupita Amondi’s career with interest. ‘’It’s interesting watching Lupitas career develop. She herself said “I had to play a slave girl to get somewhere”?. This is an accomplished and Harvard educated woman!’’

Bonnie touched on something I find my black girl friends lament about often. The idea that their children don’t identify themselves positively with their black skin, and prefer the blonde white doll to the ones that looks more like them.

‘’I had to touch on deep issues about myself in order to write this book that I may not have wanted to face. I had a really huge Shirley Temple obsession at aged 8. Its really hard for me to process that now. I used to draw her face as my face. But in the book it was something I felt I had to say as a lot of non-white girls go through the same thing. One day my dad brought home a black doll and put it in the middle of my blonde dollies. I lost it and freaked out at him and wanted her outta there. I used to put lye on my hair to relax it and used to question why? ‎I saw actress Cicely Tyson on a TV show once with short hair and she gave me the courage to cut all my hair short. So that was hard for me to go into and also other subjects about race. It was hard to be the black power person by day and dating white men at night. I had to deal with that. To face these contradictions in your life is tough. I was called out a couple of times. I talk about it in the book. Cos we black women aren’t afforded contradiction or publicity. You get nervous about lil kids looking up to you in case you say the wrong thing’’. 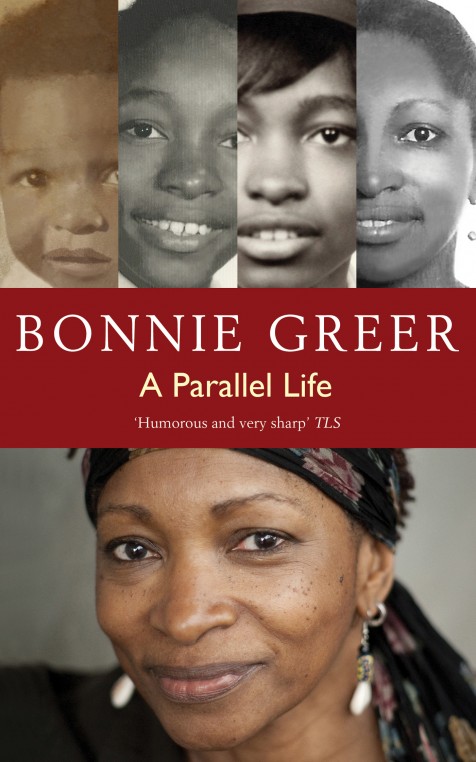 The new generation of young black women are of concern to Bonnie.’’ throughout history children are usually taller than their parents, but the generation of black girls born in the eighties are mostly all shorter than their mum’s. This has a lot to do with poverty and giving birth young. ‎I’m a champion of people’s voices-especially black women’’.

‎She’s not just a champion of women of colour. She noted in the audience Q&A session post reading, when asked by a teacher how she could encourage her class of young black boys to aspire to positive TV images like we used to with ‘’fresh prince of Bel Air’’, that this was a new world where anyone could make it, and that the young black boys should make their own content and it would break through, like so much else in the web based new world has.

In the same breath she noted that even women of every nationality and style have a tough time in the male dominated broadcast world. ‘‘The BBC are getting smaller and smaller and to get onto SKY TV you have to be a woman that wears short dresses with short sleeves’’

‎Bonnie came to the UK in 1986 as part of a production at the Edinburgh Festival and loved it so much she stayed, becoming a British citizen in 1997. She was appointed an OBE in the 2010 birthday honours and has said ‘’ I wouldn’t have accepted board appointments to the British Museum; the Royal Opera House, Covent Garden; the Serpentine Gallery; the presidency of the Bronte Society and a seat on the cultural board of the first world war commemoration if I didn’t believe not only that culture belongs to all, but also that there is a duty in a democratic society to make it accessible to all, too’’.

One audience member asked Bonnie her thoughts on the Birmingham Trojan horse issue. Bonnie stated ‘‘the only Trojan horse is the one that the Tory party is running where Gove is over stepping the mark. The key British value is fairness. ‎We’re in a situation that’s not fair. It should be live and let live. Britain allows you to pretty much get on with things. In the USA you have to get your credentials out there first’’.

Bonnie isn’t as militant as she once may have seemed. Talking about her incredible personal experience working with her editor and publishers on her book she admitted ‘’20years ago I would’ve said a white man couldn’t work on anything with me. But in this book I wrote what I wrote. My editor Martin told me what he wanted more and less of and we made it work. There things I was afraid to say but they were coaxed out of me. My parents told me to go see the world and don’t let anyone stop me. So that’s what I did. We need a plethora of voices out there. I hope all of you write about yourselves too’’.

Hearing Bonnie read, you can’t help but laugh at her personality full of wise observations and hilarious commentary. I became friendly with Bonnie two years ago, as we are both panelists on Ladies Talk- a panel show featuring women of colour lead by Actress and comedian Angie Le Mar- debating topical and cultural issues. In the short time I have known her I’ve been blessed by her wisdom on issues as wide as love, bereavement and more and she’s genuinely helped me understand life better with her musings in the green room backstage post production. This book breaks her right down warts and all. She’s our very own Maya Angelou and we should treasure her soul.

Bonnie was born on Chicago’s west side and says ‘’A Southsider’s motto is: “If I don’t know you, I don’t care what you say.” The expression “tell it like it is” comes from the Southside too’’. And that dear reader , nicely sums this lady up.