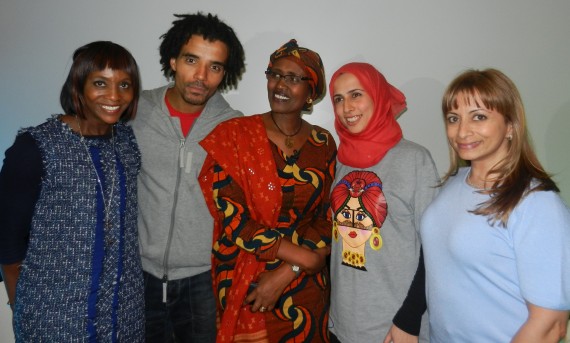 Winnie was a calm, paced empowering speaker. She made parallel comparisons between Mandela and her organization Oxfam highlighting that they both stand in solidarity with lone men and women. She implored

‘’I have seen first hand that small weapons can inflict horror. It took ten years of hard campaigning of Oxfam supporters to build public support for what we knew what was right. Lives will be saved now cos there’s an international law and we can make change’’. Oxfams vision is a just world without poverty where all are treated equally. This new world is within reach. Nelson Mandela taught us with willpower and mobilising to stand together we can change the world”.

She reminded us that the 85richest people in the world own the same as a third of the world
She informed us ‘’Exclusion and discrimination creates deep social problems. It keeps poor people poor and powerless. Here in the UK the gap between rich and poor is back at the great depression degree in 1920s. This is sixth richest country in the world yet people here are turning to food banks. Is this morally defensible?’’
She continued ‘‘we need goals for ending poverty in every country. We need to crack down on financial secrecy from banks and tax havens. This is money that should be going towards lifting the poor out of poverty. We need decent jobs for young people and to remove barriers to rising for women’’.

‘’I fled Edi Amin’s regime in Uganda in the 60s. I found asylum here in the UK and now run a huge company. Everyday I stand on shoulders of giants. A young African refugee like myself has been allowed to thrive. Be part of the movement for social justice. That’s what Nelson Mandela is saying to us. “It always seems impossible until it’s done”. 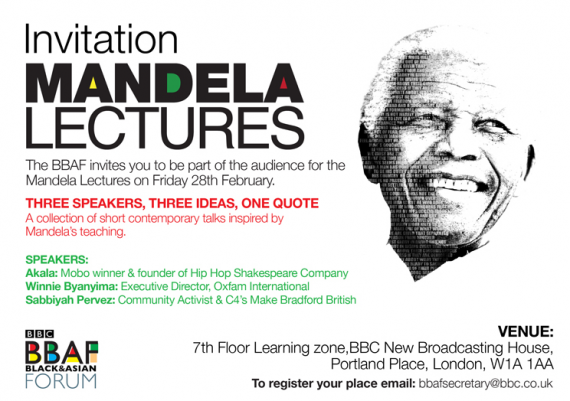 Sabbiyah was very fast paced in her speech and her passion was clear.

‘’In the first generation of UK Muslims were told right from the beginning what they can and can’t do. They can’t let go of the old rules or they’ll lose their identity, so us in the next generation has conflict. Asian women are brought up to feel inferior to their brothers. If you’re constantly being told your only role is to serve as a mum and wife how can u grow as an individual. The Muslim youth are very marginalised. They’re all terrorists!’’

Finally highly articulate, knowledgeable Akala finished the evening with his very many deep facts and stats to blow your mind about black history around the globe. He spoke so fast that I had barely been able to take in one fascinating fact before he hit us with another. He noted that

‘’Nelson Mandela was in prison for almost as long as I have lived. It’s easy to view Nelson Mandela’s story from cinema seats. However not one single corporation after slavery ended was forced to pay out reparations. South African bank heads still kept their jobs after apartheid ended. To this day whites still control most of the African land. The ending of political apartheid is to be celebrated. But apartheid did not end. It was altered but not shattered. Currently, The third world is literally paying with their lives for the super rich of the first world’’. 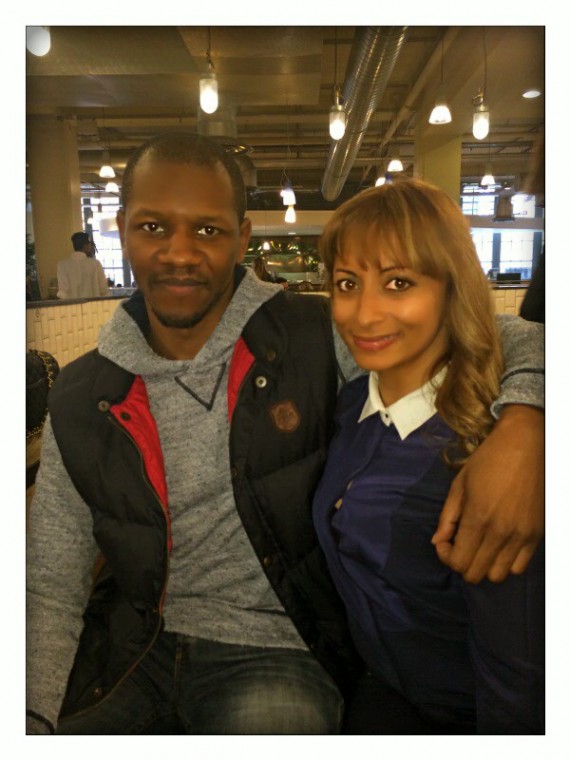 GIGGS AND JASMINE AT LUNCH.

I joined Giggs one afternoon for an extended lunch where we wandered around Whole Foods (as I assumed no-one would recognize and hassle him there) and searched meticulously for dairy and vegan food for his son who is allergic to food containing them. Giggs spent ages walking round and round aisles, questioning all the store assistants, asking intricate questions about what his son might like. One assistant was particularly helpful. Turns out after we finished eating that he was a massive Giggs fan after he tweeted him ‘’hope the vegan cake goes down well bro ’’ lol. I say ‘’after we finished eating, but alas, it was only I eating as Giggs being the staunch catholic that he is, was fasting for lent. Yes. Really!
=========================================== 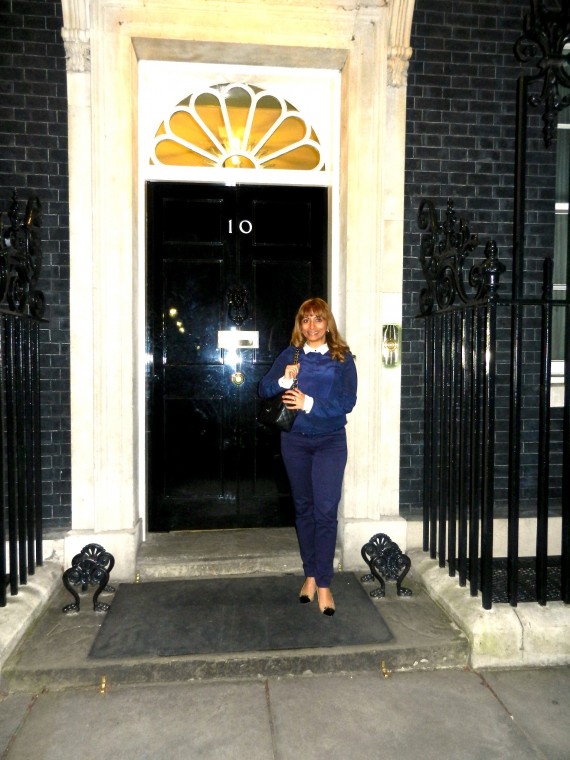 I ended my week at 10 Downing Street after I received an invitation from the Prime Minster to join him in celebrating many of the UKs most inspiring women. It was a very empowering evening in the iconic address where we all eagerly took photos with the most famous front door in history. 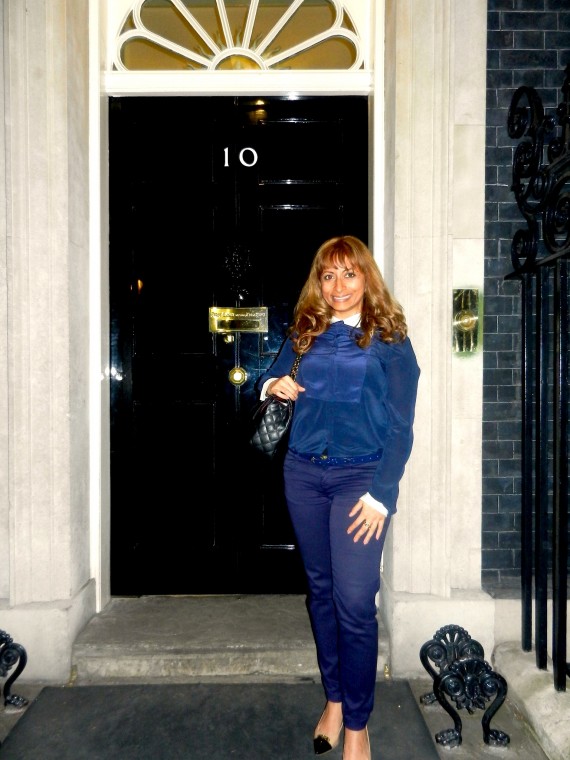 We were offered a fabulous yet simple array of refreshments. All the attendees were from a variety of worlds. Campaigners, heads of charities, leading businesswomen, news editors, Joan Collins, Carol Vorderman, Eve Pollard, TV chef Lorraine Pascal, newsreaders like Fiona Bruce, supermodels like Erin O Connor, Olympians and more.

David Cameron flew back all the way from his meeting with Angela Merkel in Brussels to be with us as he didn’t want to disappoint ‘’the most important lady in his life’’- the elegant, sophisticated Sam Cam. He made a lovely welcome speech thanking us all for being who we were, doing what we do and being inspirations to other women. He emphasized that

”as the UK was the only country to have fulfilled its foreign aid commitment to the rest of the world this past year, that in the next year we have a right and moral duty to lead on stopping female violence and discrimination globally”

. He firmly focused on female genital mutilation and violence towards women and we were all on board by the time he finished. 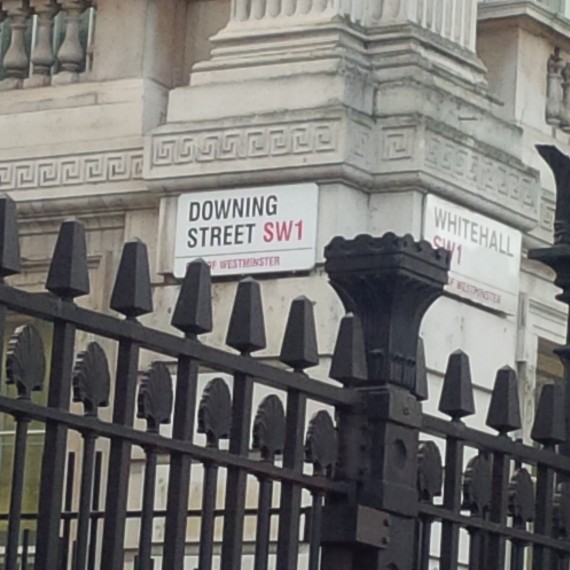 The UK has our own issues socially and politically, but I think if we’re all brutally honest, no-one could say we don’t live in one of the greatest countries in the world where women are allowed freedom of speech, education and many other things our fellow sisters globally do not. High five Mister Cameron! 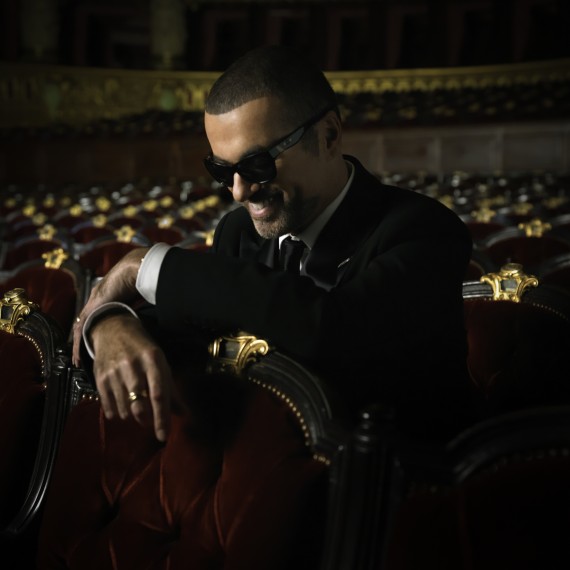 The invitation stated ‘’George Michael cordially invites you to a very special playback of his new album ‘Symphonica’ at the Hamiltons Gallery, Mayfair. So off I went to go hear the latest album by the whites man with soul that has us all screaming along to his teen pop hits as well as grown adults solo soulful smashes across three decades.
The ‘Symphonica’ album was a labour of love, which fulfilled Georges long-standing ambition of showcasing his extraordinary vocals alongside a symphony orchestra in some of Europe’s finest, most prestigious venues.
I could tell by the types of older, more serous journalists from ‘’quality press’’ that this wasn’t just any old playback of an album. It was a breakfast session inclusive of a Wolesley style spread of mini pan au chocolate, croissants, fancy pastries, mini salmon and cream cheese bagels and good strong coffee.

Symphonica is Georges sixth solo album and will be released on March 17. In the vein of Frank Sinatra and modern day pretenders to the swing throne like Jamie Cullum, Robbie and Michael Buble, George has mixed it up on this album and selected songs by some of his favourite artists to cover.

He’s acknowledged respectfully by the top tier of music players and won Grammy Awards, Ivor Novellos, Brits and MTV Awards, but his coolest prize for me, is that In the highly regarded black music community, George Michael is also so loved he gets what we call a ‘’ghetto pass’’. Weddings blast his hits, Singers sing ‘’careless whisper’’ at karaoke, rappers adore him and pump him in their rides, basket ballers play him to focus, and carnival sets always showcase reggae and calypso versions of George Michael classics. He’s sung with Stevie wonder, was the first white male vocalist to sing with Aretha and proving the younger hip-hop generation co-signed him early, even Mary j Blige bounced on a track with him.

It’s no coincidence he has respect from strong ballsy characters. He may be shy but never one not to own his own mistakes, call out injustices and stand strong with his life choices. Having gone up against the gigantic machine that is Sony Records he fought a battle worthy of a gladiator and came out still singing. He caused political mischief years before Kanye with ‘’shoot the dog’’, which poked fun at George Bush and Tony Blair. He spoke out against the Iraq war. Turns out he was right all along. George has had several musical lifetimes away from the scene where he’s made no music and still returned from the ashes like a phoenix with new no 1 albums. Never count this player out.