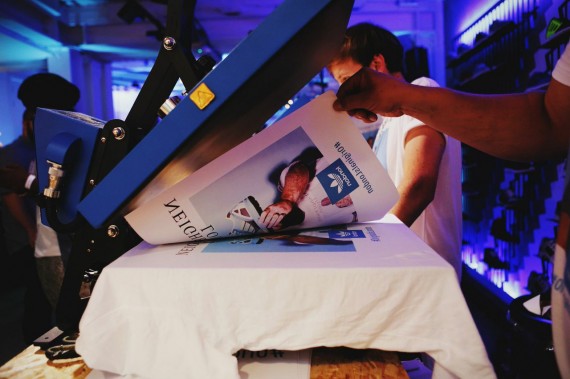 PARTY GUESTS HAD THEIR FACES PRINTED ONTO TEE SHIRTS.

However flat the London weather gets in the summer, a key staple in this Londoner’s diary, are the sporadic Adidas events and parties, that regularly unite London’s movers and shakers. 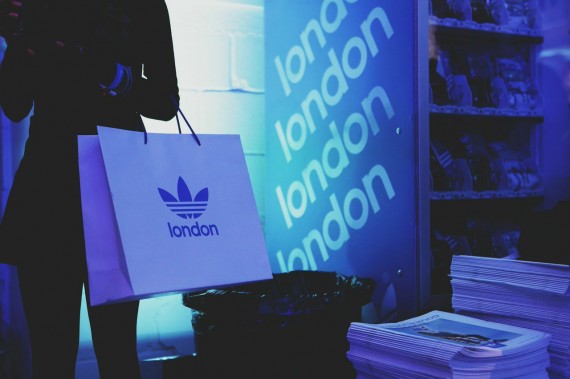 Last week they threw a party for the launch of their new originals flagship store just off Carnaby Street. As if all the fun moments that they always have us jumping up and down with glee at aren’t enough- this time guests were welcomed with a live photo-shoot from talented photographer Charlotte Rutherford with our portraits then printed onto t-shirts.

Presenting the very best of adidas Originals across trainer drops, limited edition releases and collaborations, the Flagship Store goes one step beyond the retail – playing host to exclusive events throughout the year, for which I will be clearing my diary. Taking inspiration from the city we all love and champion daily, I have so much synergy with the new store- it champions youth and creativity with a diverse and ever-growing cultural offering. There’s a reason so many young people rock the brand. Its supported grass roots and mainstream talent for decades and now is stronger than ever.

Guests were chowing down on succulent tasting food from Dalston’s very own Rita’s who provided the food whilst a host of local talent contributed too. London artist Rosanna Webster created a window installation inspired by the sights and sounds of the neighbourhood while street artist Malarko produced artwork inspired by the colourful characters of London. 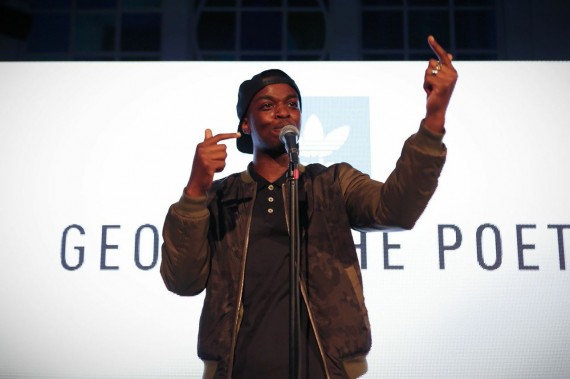 GEORGE TO POET ENTERTAINED THE GUESTS WITH HIS SPOKE WORD GENIUS.

Adidas functions always have faces from various walks of life and this one was no different as music acts, creative arts influencers and tastemakers all intermingled. Wretch 32, John Boyega, Mr Hudson, Luke Worrall, Aaron Frew, Alexis Knox, Josh Johnson and India Rose were holding court amongst others. 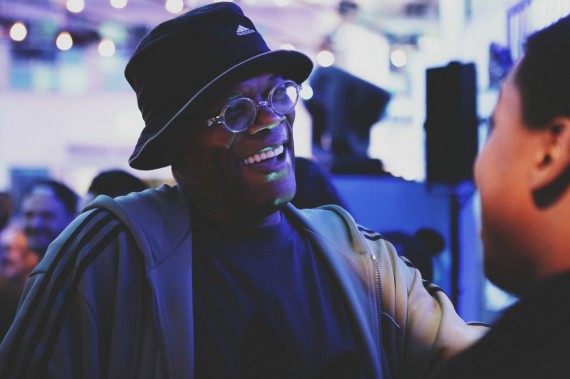 BROTHER SAMUEL ROLLED IN ALL CASUAL IN HIS THREE STRIPE CASUAL LOOK.

We were all so consumed with this entire buzzing atmosphere, that when Hollywood legend Samuel L Jackson and London’s finest international actor and music dj Idris Elba strolled in, the whole venue froze in shock as things moved in slow-mo, before erupting again in a frenzy of excitement! 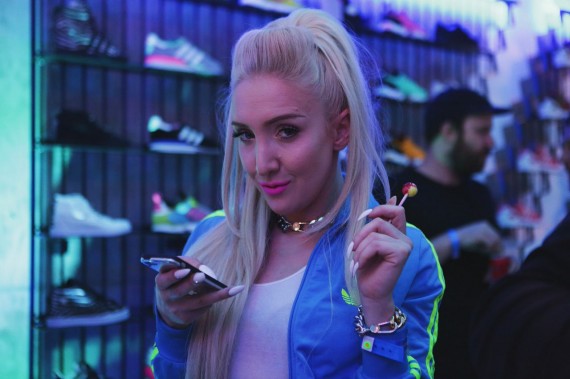 ALEXIS KNOX IN THE HOUSE.

THE LAUNCH OF OSARGENEWS.COM AND AFICAN DNA TESTING. 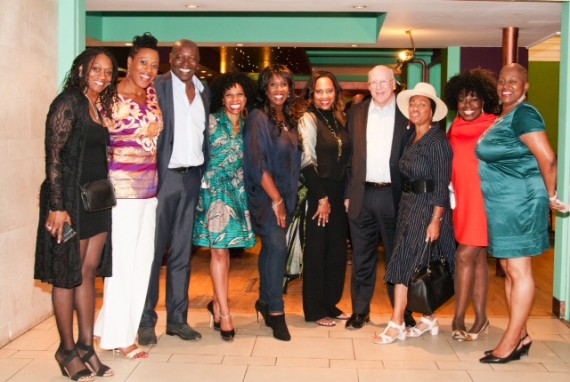 ANGIE LE MAR WITH GUESTS AND CELEBS THAT HAVE HAD THEIR DNA ANCESTRY TESTED, ALONGSIDE OSARGENEWS.COM FOUNDER MORRELL MAISON AND DR BAIRD.

Next. I joined Britain’s first black female stand up comedienne Angie Le Mar at the Tricycle Theatre on Saturday for the launch of osargenews.com, an online news platform for the global AFRICAN DIASPORA. Wherever you’re based in the word, you can now stay abreast of all news that is of interest or that affects the African community. 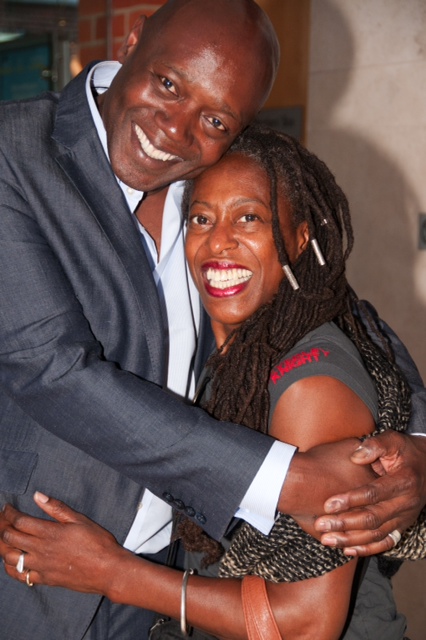 Osargenews.com is an online platform delivering news twice daily to subscribers via an email address. With access to news from over 100 different countries, it is possible to stay on top of the latest news stories from any of the featured countries or from the African Diaspora as a whole.
The launch of osargenews.com, a free African Diaspora News aggregator, saw playwright Angie Le Mar, the osargenews.com Brand Ambassador, welcome and talk to the packed theatre about why this was an important platform for the community to engage with each other.
She said “osargenews.com is a fantastic opportunity for Africans and people of the African Diaspora to stay connected to their roots and their heritage. It is also a valuable platform for those interested in finding out more about what is happening in those parts of the world and I am delighted to be the Ambassador for such an exciting project” 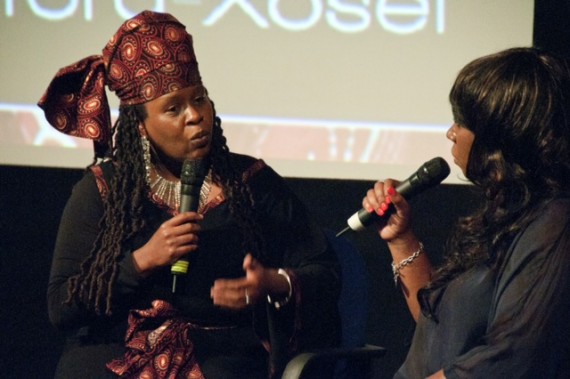 She also introduced the new African Diaspora specific DNA testing products exclusive to osargenews.com and unveiled her DNA test results for the first time which showed that even though she is Jamaican she has west African roots. She also hosted a conversation with Dr Michael Baird, one of the worlds leading human geneticists and Dr Eran Elhaik, one of the foremost experts on DNA testing and inventor of the African GPS Tracking System. In a nutshell this is like the TV show ‘’who do you think you are?’’. If you’ve ever wondered about your DNA ancestral roots, then this is a chance for you to find out exactly where your DNA traces back to. One doctor revealed to me that a Muslim man that had come in to have his DNA tested, found to his shock that he had Jewish roots! Knowledge is power! I too had my cheek cells swabbed and sent off to a laboratory and will have my results back this week! How exciting. I could be descended from royalty!…or….anyway I digress…
=================================================================
AFRICAN CARIBBEAN LEUKAEMIA TRUST CHARITY FUNRUN. 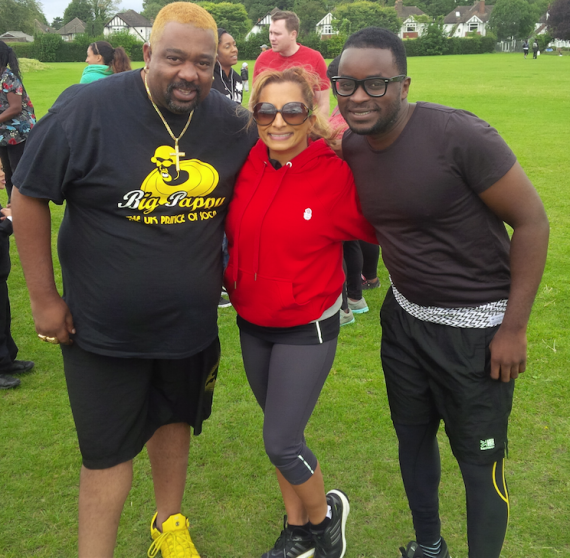 PRE-RUN WITH MARTINJAY AND FEMI OYENIRAN.

I finished my week at the beautifully green picturesque Lloyd Park in Croydon, where I was taking part in the 5k charityrun for the ACLT Charity. Running alongside me were soca music maestro Martin Jay who was a true trooper- he had been up all night at a function, and was multi tasking arranging for this weekends carnival costumes to escape (via their birth in Trinidad) from Gatwick in time. 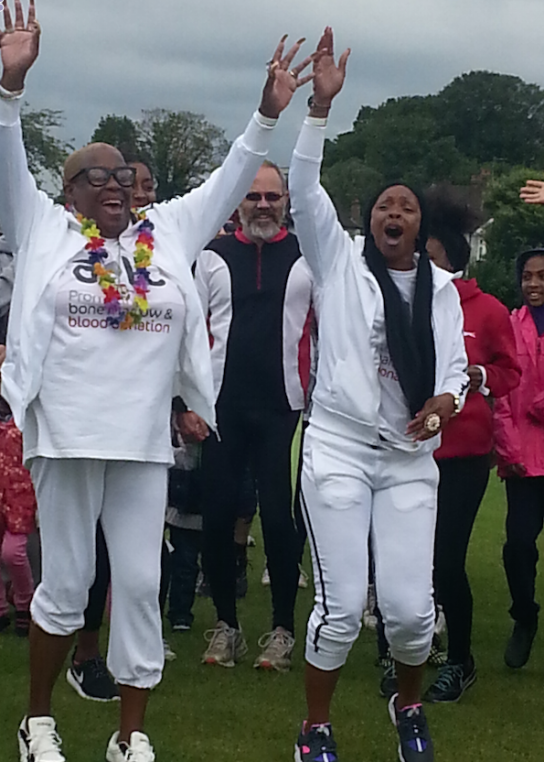 THE GOGGLEBOX LADIES SANDY AND QUEENIE CAN’T WAIT TO GET THIS RUN STARTED!.

Also with us were Gogglbox stars Sandy and Queenie as well as actor Femi Oyeniran. The turnout was incredible and raised a lot of awareness for a great cause. 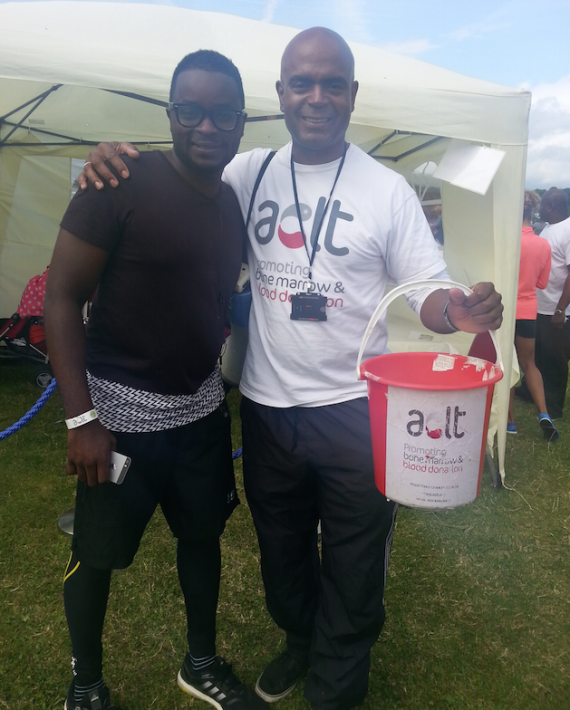 ACLT Co founder Orin Lewis thanked us all on behalf of the affected community members and families for turning out so early on a Sunday morning. A huge canvas of Orin and Beverleys son Daniel was also placed in full view for us to be reminded of the catalyst for this great organisation. 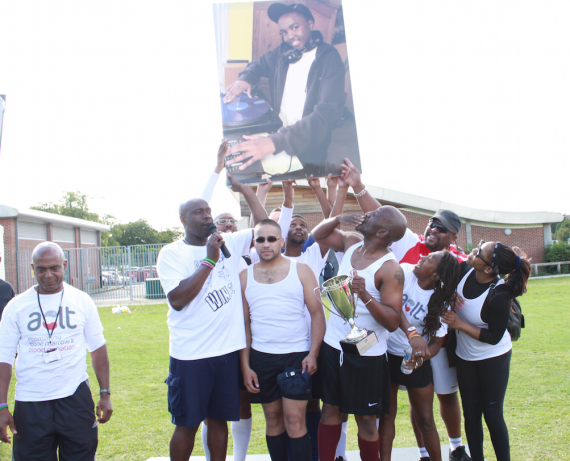 I couldn’t help thinking of the irony that one day we will all be affected in some way by a medical need and until it happens to us we never take things like this seriously. If all the people I saw focusing on the latest £500 Christian Laboutin trainers simply donated a tenner charities like this would be in a stronger position to help those affected. 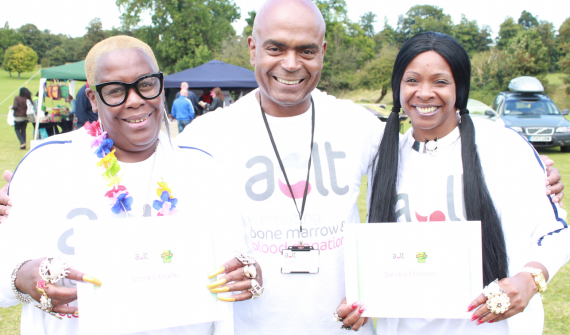 We were warmed up and then set loose with some of us sprinting two laps around the park and others of us more casually speed walking. I’ll let you guess which group I belonged to. 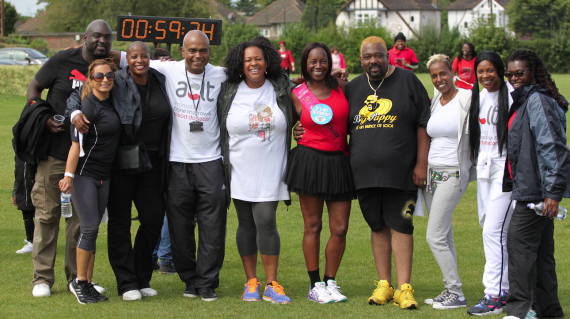 AND ITS A WRAP!- WELL DONE EVERYONE!

Post run we had fun in the sun watching the afternoon teams play 5 a side footie and scoffed the delicious jerk chicken aroma that I had been following whilst running around the park!