Idris Elba at the first showing of Mandela, My Dad and Me, at the BFI.
PIC COPYRIGHT- Gary Bartlett.

Many may be surprised to learn that even though most people know Idris Elba as an accomplished actor, its actually through music that I’ve known him the longest.

When younger we all used to attend west London nightclubs Subterania and Hanover Grand. Idris was always the music geek standing tall and alone in the corner, in a zone, nodding his head to all the fresh beats being spun by DJ’s back then.

Even when I headed up MTV Base, Idris would come and see me and send me any music he was working on. So it was a huge, wonderful surprise to me few years back, when I heard that my old mate was now a Hollywood star. As I sat with him at lunch in the MTV Camden cafe, my colleagues both male and female would turn into bigger groupies than they were for music stars. ”Jas is that Stringer Bell? How do you know Stringer Bell? Omg what’s Stringer Bell doing here? Can I get a photo?”. Wow it was mind-boggling. Now Idris’ tenacity has paid off and his acting reputation, post him playing the lead Mandela, is helping him promote his music brand.

This week at London’s BFI, Idris Elba presented a new documentary film to an audience for its first ever screening. Titled ”Mandela, My Dad and Me”, it chronicles the journey of his finishing up making the Mandela movie, simultaneously to his father passing away from cancer, and how his love for music handed down from his father to son, helped the grieving process, eventually leading to Idris finishing a music album based on South African sounds, in his fathers memory. 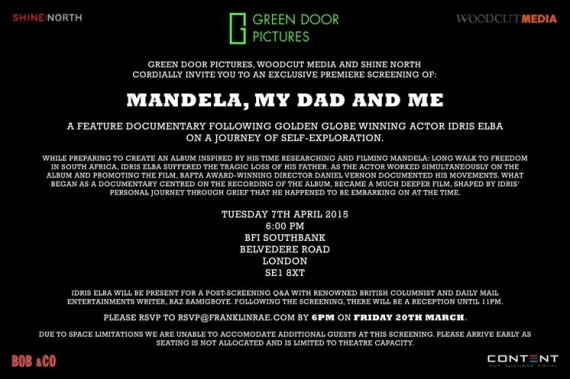 At the London premiere were Idris family and friends who heckled him playfully. His aunt who had once given him £200 as a child to help on his way and his cousins and best friends who taunted him about his choice of football team (Arsenal) and more. 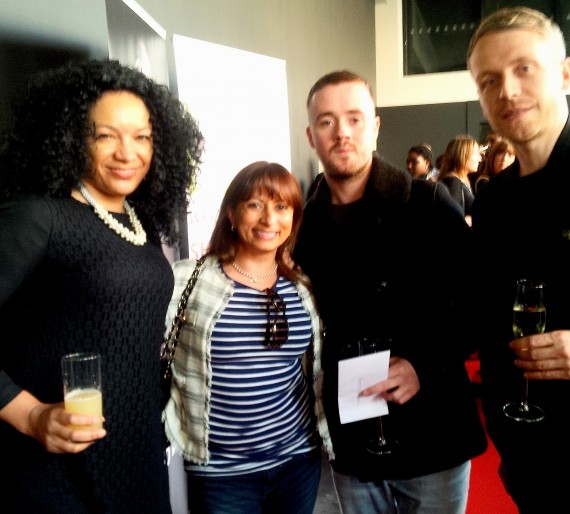 Once seated, Stuart Brown – Head of Events at BFI – welcomed us and reminded us that we were the first audience ever to see this film. Idris’ agent also shared moments with us.

“Idris has an incredible great energy, my proudest moment was when he signed up for Mandela. He filmed in SA and for four months immersed himself into the culture and music. When filming was complete Idris called me again. He wanted to create an album that would encompass the making of the film. But alas, whilst Idris was making it, his father battled with cancer and passed away. This film honours Winston Elba’s journey”.

The film is an ode to Idris parents with a particular focus on his father Winston, who is from Sierra Leone and worked at a Ford car factory. His mother, Eve, is from Ghana.

The film is not all high budget gloss and structure. It’s a fly on the wall style, amateur shot piece of content that gives the viewer the feeling that they are watching his own personal videography following his day-to-day activities.

The glamour of the red carpet, the monotony of a million press junkets, frustrating times keeping the peace between musicians in his studio, footage of him attending Mandela’s private burial, (Idris tells us ” the Elba name being recognised at Mandela’s funeral just blew my mind”), all whilst dealing with his fathers passing.

Idris personal camera also shared with us great access all areas moments like him visiting the white house for the second time. Idris imitated Obama declaring ”the man that played Mandela is here, last time he was swarmed by the ladies, so I just want to say, ladies please leave him alone!”.

Idris shares many snippets of info during the film ” ‎this film is a doc about what it’s like for an actor to who does music. My dad played all sorts of African music all my life. This album is an ode to these gents. Gents like Gregory Issacs and Culture. I used to make turntables out of cereal boxes at aged ten, and then the acting bug came and took me. My dad as an elder African gent was my skeleton blueprint for playing Mandela. I wanted to understand what Mandela was listening to when he was alive so immersed myself in South African music. . I wanted to get back to SA to make an album. We were set to go and then in a short space of time dad got ill and died. But I knew he’d want me to do it. I re-visioned how I was gonna grieve. After his funeral I went to SA and knocked this out in the studio, the grueling SA promo with my family was mad. But I channeled my dad’s energy. After the Mandela film it should been the greatest time of my life and……I dunno”

‎Idris knows his limitations and so roped in his mates to help with the South African influenced music album. He cast ”Ben aka Mr Hudson as ”the music guy who would help me shape this”. He also flew George The Poet and Maverick Sabre out to contribute too. A lot of initially hesitant local South African music stars were also persuaded by the Elba charm to get involved. Household names out there include Aero Manyelo, Dj Spoko, Mama Northembi and the Molatollo Queens who have been African music legends for six decades.

Idris was keen to let us know that he paid all the musicians involved a respectable fee for their services. “It’s not a vanity project it’s a proper album”. ‎During the post documentary Q&A session hosted by a pretty disappointingly prepared Daily Mail staffer Baz Bamigboye, Idris also shared news about new acting projects like a half hour TV doc called “King for a term” about his childhood where he plays his father. There were also many moments referring to a possible new role in Star Trek.

The James Bond question reared its ugly head again with Idris patiently explaining ‘‘The Bond rumour is now eating itself. If it were ever going to happen, it now never will. Daniel Craig started the rumour in The Sun and its just spread. I have never had a meeting of any sort with the James Bond team”.

Idris clearly has a yet untapped comedy funny bone that appeared quickly and regularly during his chat. But pushed on his interest of politics and whether he would vote this May he responded ” my Dad was very interested in politics but that passion didn’t pass down to me. Raising awareness for Ebola this past year I guess was a political move, but I’m not interested in being a part of the politics game. Also I’m very out of touch with UK politics so…. I’ll keep it real…”. And just as it looked as if he were about to say ”so I’ll keep it real and probably won’t vote” he smoothly added ”but you’re right, yes, I should vote though, you’re right”.

Naturally there will be people rolling their eyes at the fact that Idris is an actor and now a wannabee music star. Idris responds ‘‘People who don’t take me seriously cos I’m actor actually propel me forwards more”.

His ego is clearly no Kanye. He also shared with us his meeting with Parlaphone Records when he went to pitch them his album. The staff in the boardroom clearly knows they’re on camera and do their best to look and sound enthusiastic. Idris laughed ”Bringing messages from Africa to the exec suite! I try to be the same wherever I am. I just played it to the Parlaphone team. But the truth is it didn’t sell well and the label dropped me after this album. They just didn’t see my vision”.

‎Don’t panic though; the big screen isn’t going to lose Elba to music. ”I am building my profile and DJ house music, but when I’m acting I’m totally focused just on acting. After my experience I just wanted to shine some light on Africa, which has already seen a big explosion in the UK with afrobeats and African films from Nollywood. I see a lot more bridges between Africa and us in the future”.