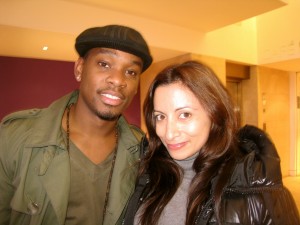 Happy New Year readers! I’m writing this column sitting underneath the twinkling white lights of the hugest Christmas tree looking outside at the snow covered Aspen mountains where reindeer are literally bouncing around me. I hope your holiday period was fun and you had a chance to reposition, reenergise and can now re-emerge into 2010 with a new positive, can-do energy. I don’t want to spoil the festive spirit so let me get the serious stuff out of the way first. Last month I complained about a London nightclub’s door policy towards young black men. well since that column we literally had hundreds of readers responding with similar experiences so I did a bit of research. And it doesn’t look good. i was angry and frustrated at what looked like the unfair treatment of a group of people but after doing some digging I hate to say it but I think I can understand the catch 22 situation.

I spoke to a friend that runs big celebrity clubs in London who told me to look at the bigger picture. Some things he told me were shocking. Like ‘’if I let too many black people in our white guests feel uncomfortable’’. On the other hand he explained that police often clamped down on ‘’urban music functions’’ because there was always trouble expected. He cited ‘’when white folks get drunk and fight they tend mostly to use fists and bottles, when its black people its knives and guns which leads to us automatically losing our club licenses and our business is our living so we will do whatever we can to protect that’’. Putting aside that the party I was speaking about was my private guest list which had people I could personally vouch for , my club owner mate retorted ‘’yes but you cant vouch for every group of young black men that come into a west end night club and we’re not prepared to take the risk with our business!’’. So I wonder whether it’s a vicious circle that will never change. Are we our own worst enemies? And if we don’t take a stand and start supporting and empowering our young people so they don’t feel the need to resort to violence will this ever change? Why were clubs trouble free in my youth- Subterainia and Hanover Grand were full of young black people with no trouble. surely quality  door staff always know troublemakers and should be able to pick them out without descrimination . Are we responsible for our own bad press? Or is it the media that always makes a huge deal about young black men and crime? After all isn’t football violence worse but just accepted?. Last month politician rod little said that most crime was committed by young black men and ‘’all we get in return is rap music and curry goat’’!. Then 2 young men were arrested for attempted murder of a pregnant girl and the media ran a huge photo next to the story of Tinchy Stryder and the hip-hop musical 1day with the weakest cited connections!.

Is it any wonder people are scared into making rash decisions about young people of colour?. If we cant vouch for our own events being trouble free why should anyone else take a risk on us?. Also-Isn’t there more violence at football matches? Lord knows what the police would  be doing to us if our club violence was on par with that. But we also have to acknowledge the shortcomings within our own communities. They do exist.

A young black man I am happy to see making continuous steady moves upwards within his acting career is Aml Ameen. You may remember him from THE BILL or the movie Kidulthood. Well just before Christmas he invited me to see him perform at the Tricycle Theatre. So on a wintry December Saturday afternoon we went to see him playing the part of Justice in the play ‘’Detailing Justice’’ .The play was part of The Not Black and White Season– where Aml undertook the challenge of playing three very different characters, in three different plays. In the 1st he played Rio- a young man convicted of Rape, who meets his father in prison. In the 2nd he plays Lavelle- a 17year old righteous intellectual kid who disturbs the world of a politician. In the last he plays Justice Ncube, a Zimbabwean asylum seeker, who has his fled his country after an attempt on his life, because of his political affiliation. He’s detained in a London detention centre, for months, and Aml emotionally showed the decline of his mental health. Aml had to use an accent from Zimbabwe, and he pulled it off. He told me afterwards it was ‘’without a doubt the most testing job of my career so far’’.

The story in ’’Detaining justice’’ was told from the points of view from all the various characters and I have to admit even my judgemental opinions were changed by the end of the performance. I often skip past immigration stories in newspapers and can find myself sympathising with David Cameron when he suggests curbing numbers on immigrants. But after watching this my viewpoints were really changed which I guess is the point of a good story and brilliant performances. Aml’s performance was so strong with him evoking tears in the audience and keeping us gripped until the end. I felt ashamed of my previous judgemental ideas about immigrants. I was so proud and grateful to Aml for opening my mind. Not about to take a break anytime soon Aml is just as busy this year. He’s starring in director George Lucas’ last epic movie RED TAIL. The story of the Tuskegee Airmen, the first African-American pilots to fly in a combat squadron during World War II.

Aml has landed the role of Bag O Bones, he’s just a cocky pilot a part of the squadron, and one of his scenes is with Cuba Gooding Jnr. Aml excitedly revealed ‘’ it was a real honour as an actor to watch his process as he prepares for a scene.  Even though my part is small, I’m hoping this a sign an indication of where my career is moving towards. Hollywood films, International recognition and opportunity’’. As if its not enough that aml has broken Hollywood he’s also begun directing his own movies. the 1st is The Pick Up– Aml explained ‘’it’s a A short film I’ve written and this will be my directorial debut through my film production company AmeenDream entertainment. It’s set in a house club about a bunch of lads, that make up elaborate stories to try and get dates with these University girls. We had an open casting and its set to be a slick stylish sexy short film’’.  Hmmm that sounds a bit suspect doesn’t it readers. Ha ha.i may take up writing and directing movies starring fit, young virile men. Maybe that’ll be my new years resolution!.