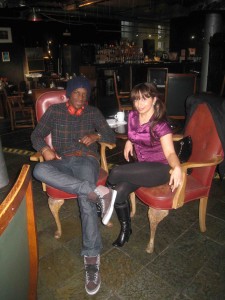 Wow! What a whirlwind month I’ve had! I spent the last week in New York, Puerto Rico  and Orlando with my girl Mariah for her anniversary/bornday (more on that next time), but before I jetted out London town was a buzz with activity.
I attended the amazing street dance show BLAZE at the Peacock Theatre where dancers from all over the globe collaborated on a beautiful piece of dance with a really diverse set of music, dance styles and concepts. The show was impressive, funny, dynamic and props must be paid to the lighting and graphics designers –it was like watching a modern day new age dance theatre spectacle. It includes street dance, contemporary, classical and a bit of buffoonery-all very entertaining for the whole family.You must catch it if you can.

Next it was off to Europe’s biggest shopping mall in West London-Westfield for the grand launch opening of their new live music venue café concerto in the uber posh VILLAGE area of the huge retail monstrosity.
We were greeted by silver trays and waiters laden down with champagne flutes and an abundance of sea food was doing the rounds too. Many of the music industry players attended and we were entertained by the dulcet tones of Terri Walker and Mica Paris who never cease to amaze me live.

Next I trotted down to the very exclusive IVY CLUB where I met theatre impresario Stephen Byrd and the new BET bigwig and his adorable wife for drinks where we talked about the differences between the USA and UK and our various worlds.
My final trip of the week was up to Wood Green North London where a very special young man who is about to blow up invited me to his studio for a chat. A lot of young people think to be successful they have to go down the footballer, video vixen or music star route whilst there are as many young power players today making moves behind the scnes and often making more money than the celeb players and keeping their private life safe too.

A few months ago, I was impressed by a newcomer called Master Shortie with his unique sound and style. Shortie told me a young producer (at the time only 18 years old) had produced his whole album. His name was Labrinth. Then a few weeks ago I heard Eastenders star Preeya Kalidas new album with a couple of tracks I loved by a new producer. His name was Labrinth. Next I attended the making of the video shoot for singer Sabrina Washingtons new song ‘’OMG’’ –heard and loved her new album-apparently one of the producers was really impressive and young. His name was Labrinth. All good things come in 3’s but this kid seems unstoppable so when the 4th moment at Tinie Tempahs showcase happened and the producer of Tinies number 1 smash hit ‘’Pass Out’’ jumped onstage to celebrate and Tinie told us it was a young man and friend-whos name was Labrinth-I was gob smacked and knew I had to meet this new hotshot, midas touch beat maker myself.

Labrinth-or ‘’Labs’’ as his people call him, is a friendly, quirky, hat loving, cool kid. He oozes confidence and is way more articulate than many of his peers.
He grew up
in Hackney as part of a big church family which included 9 kids. Music seems to be intertwined in their gene pool as his brother is a drummer and has worked with Daniel and Natasha Beddingfield.
Labs Grandad is a preacher and music man Mr Ruben Edwards. Otherwise known as musician R.l Edwards.
Labs recalled his earliest musical experiences where he explained that he and his brothers and sisters had family jamming sessions with them all playing bongos, drums and piano.. Showing an early entrepreneurial spirit they charged their uncles, aunts and family members 20 pence to come and watch their ‘’shows’’.

As well as take part in music lessons at school from the age of 13 Labs was obsessed with all things musical .
Like many youth he used to sing and rap after being  affected by hip hop, but when he wanted beats to rap to he couldn’t find anyone making just what he was looking for-so-he made them himself.
I had to drag it out of him but his rapper name as ‘’Dapper D’’. Even as he recalled it he cringed badly- (so remember that when he’s so huge he wont sign autographs-we can remind him of his roots!).
Born

Timothy McKenzie, he became Labrinth after looking through the dictionary and liking the idea of the maze-‘’life is but a maze’’.
His first big break was meeting Master Shortie at their mutual friend singer Henrietta Bond’s house warming party.
Labs wasn’t too sure of what to make of Shortie at first due to Shorties loud and in your face dress style and attitude.
Apparently Shortie heard some of Labs music at the party and then went and checked out his MYSpace page and before you could say ‘’speedy Gonzalez’’ both were working on music together.
Labs says he was keen to work with Shortie as they both wanted to make mature music even though they were both young people

Labs confessed that like olden Andy Warhol days, his studio is a meeting space for other young talented music makers like Shortie, Bluey Robinson and others and often they’re in there all night working and can be found asleep on the sofas often after all night sessions.

So Labs started with Shortie, then Bluey, then Preeya and Sabrina and now he’s making his first Kanye West / Timberland move by putting out his own material as an artist.
Like a great producer with an ear for voices and styles, he’s unafraid to tell an artist to switch when needed too. A good example when he first heard Blueys voice he revealed he wasn’t too convinced about his vocals and asked him to tighten up his falsetto.

but Labs wanted to stick with his own manager Marc Williams (a former musician himself that used to be in “homeboy hpippie n a funky dread”
) . Labs met Met manager marc through his mum who was doing a music course

that Marc was teaching,
Labs reveals he didn’t want to sign to Stargate because of the money percentage cut
that they were offering him.
He confesses to being a mumsy boy and often says he wants a respectable journey
in this music game

Of course now he’s hit the UK number spot by producing Tinie Tempahs ‘Passout’ which he says that the original beat was written for Bluey but it wasn’t really his style but as soon as Tinie heard it he took 30 minutes to write the verses and hook and history was made.

Labs revealed when he first heard ‘Passout’ on Radio 1 he wasn’t too fazed as his tracks with Shortie had already been played on Radio 1. Labs boasts ‘I know what kind of music London loves.
We’re not about plasticness. We like it rough”
. Reminiscing about ‘’Passout’ Labs smiles ‘’my favourite part of making ‘Passout’ was adding the reggae part, I went crazy showing Tinie , I got the ideas from old school 70’s Sci Fi movies.
It’s a sound Labs says he will use as a signature sound.

Labs first solo single as an artist will be released this summer and its called
“Let the sun shine”
. Like many young hopefuls he says it was produced in his bedroom when the sun was coming up one morning. Proving my point about having a knowledgeable manager/side kick / homie in his team labs admits it was manager Marc that schooled him on old skool drum n bass and other sounds that labs was unfamiliar with.
Labs Album is coming next year but I’m wondering when he might have time to get it done as knocking on his door right now are Gorillaz, nadine from girls aloud, Pixie lott and more.
Labs confesses he would love to wk with Massive Attack, Loose Ends and Moby
.
Labs says his objective he emphasises is to ‘’bring UK urban into commercial music.

He’s formed his own production company- and says he’s going to keep making strides ‘’putting the grit into pop” and we should look out for his sound “gritpop”.
With 21-year-old kids making power moves like this there will definitely be a whole new generation of industry leaders in the next few years. Play on players!.