You don’t need to be the victor to be the ultimate winner. Everyone that has made it big has experienced bumps on the route to the top. Richard Branson didn’t do well in his education. Alicia keys and 50 cent were dropped numerous times by their record labels before making it. Destiny’s child lost their talent competition before hitting the big time. But the moral of the story is that those who persevere and don’t become disheartening and discouraged make it. It’s the old quote’’ slow and steady wins the race’’. The hare and the tortoise. The latest example of this is the British dance group Flawless who didn’t win Britain’s Got Talent but are now doing better than ever. This past weekend they performed alongside Kylie Minogue at Buckingham Palace for the Queens Jubilee and last weekend kicked off their UK tour with the English National Ballet at West London’s Hammersmith Apollo.
Both dance troupes brought their A GAME to the stage and performed a beautiful evening of dance, which included ballet, and street dance. The wonderful thing about this was as well as perform separate ballet and hip-hop dance sets, both groups performed together in each others skills. Also the great fact was that street dance fans that didn’t appreciate ballet were drawn in and got to engage with ballet, and ballet bods that weren’t really down with street dance were about to respect the art of street dance. It was an amazing recipe of mingling on a new level to witness.

I grew up dancing at ballet school with all my Royal Academy of Dancing ballet exams and taught ballet for a long time whilst simultaneously being involved in numerous street dance groups both on a street level where I was a break dancer (honestly-my street dancer name at the time was Minnie Minx inspired by Beano comics!). I also taught jazz at Pineapple Dance Studios as well as danced in hip-hop videos (real dance routines as opposed to sexy bikini dancing). So for me this was a dream come true type of show that I would be loved to have taken part in my self as a young dancer.
It was fascinating to see that the all male Flawless cast had trained up in balletstyles where they also actually lifted the all female English national ballet cast in pas de deux routines. It was mind blowing and looked so creative and new. The ballet ladies took on some street dance challenges too and whilst they were good-the boys most definitely piped them in the ‘’lets try each others techniques’’ battle.
Set in a school, the story focuses on dance school and a mad professor type that has a time machine. The dancers wear school uniform attire with sets that were amazingly creative with the school library, playground, dance studio and more.
The music was very diverse with classical pieces alongside modern day chart hits by Labrinth, Jay Z and Kanye, Cypress Hill, Maroon 5, Usher and more.

Post show, lead Flawless member Marlon told me that the show was put together in only 2 weeks training after a total of 6 weeksdiscussing how the show would be put together. Marlon explained that 1 person from both the (English national ballet) ENO and Flawless worked things out first. Marlon talked through the show and routines and then they nominated ‘team captains’ from both dance crews to choreograph the numbers.
Christian and Nathan were the dance captains from Flawless with Marlon as lead choreographer and Jenna Lee was the dance captain/ ENO choreographer.
Marlon also revealed that the male dancers from the ENO- came and helped on a couple of sessions on how to lift the ladies and helped with tips about where to hold them and so on. Marlon added that whilst this is an unforgettable experience for his group they did already have an appreciation and respect for ballet before this show.

The wonderful thing was that the show was great for all ages and classes. I loved the younger street dance styles, but there were also sections of old skool hip-hop dance sets too including steps and musicfrom eras of street dance.
A special shout out must go to the graphics team who really took the visuals to another level – a real arts fusion of dance, staging and visuals. Brilliantly present day and futuristic! For dates near you check out flawlessofficial.com . To see more backstage exclusive material from the show check out the flawless youtube channel flawless tube.
This was like a night at a West end musical and a full on ballet-a really worthwhile 23 hours viewing for anyone’s life! Do check out the uk tour as it sets off in the next few weeks until July 8th. 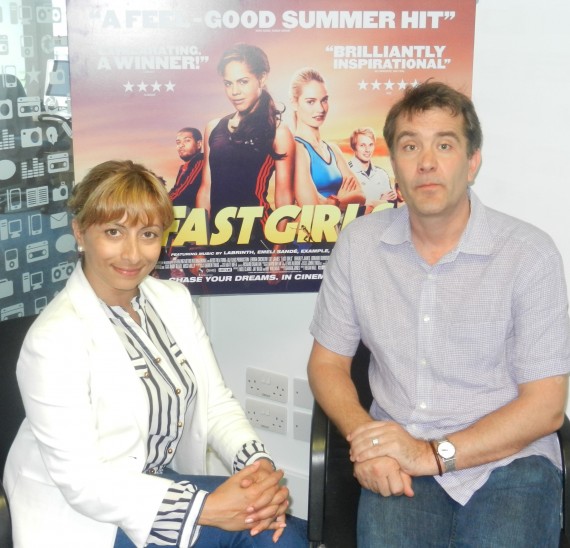 JASMINE WITH FAST GIRLS FILM PRODUCER DAMIAN JONES!
Next we hopped along to the film premiere for FAST GIRLS. The new film developed and produced by Damian Jones, featuring and written by our very own Noel Clarke.
The storyline centres on a street-smart runner who develops an intense rivalry with an equally ambitious wealthy young athlete. Locations in the film included Lee Valley Athletics Track, Crystal Palace, the Tate Modern and various London estates and nightclubs
Its so refreshing to see young actors in an urban London setting starring in a movie that has nothing to do with street issues or hip hop. Instead its topical in that it has an athletic theme, which is very apt now with the Olympics coming up. My mate Noel described the film as ‘’rocky but with girls in lycra!’’ Damian said that after working with Noel Clarke on Kidulthood and Adulthood, he approached Noel to write the script for the film. He added that every time he and Noel go out for dinner Noel is always on a healthy eating diet of salmon and veg (cos he’s bulking up for film parts) whilst he likes to tuck into a good ole plate of fish &chips LOL.
As Sarah cooper in Screendaily wrote ‘’It’s the first British film to have a mixed race girl as its central character, but not only that, five out of the six lead girls are black or mixed race. “Rest assured, that has never been done in this country,” says Clarke, who is becoming something of a champion for strong female characters, following his own film 4.3.2.1, and now this’’. It looks like Noel is single headedly changing the movie landscape for actors in the UK.
Damian revealed his biggest tip for getting into the film production industry is to get a driving licence as no producer will hire you without one as so many shoots are on set miles away in lonely desolate areas. He also added that working with Tupac on Gridlocked was an amazing experience for him and that Tupac was indeed a very young actor in the prime of his life.
If you have young people that need inspiring with some hot ladies in lycra in the run up to our Olympics next month then go check out FAST GIRLS this week!