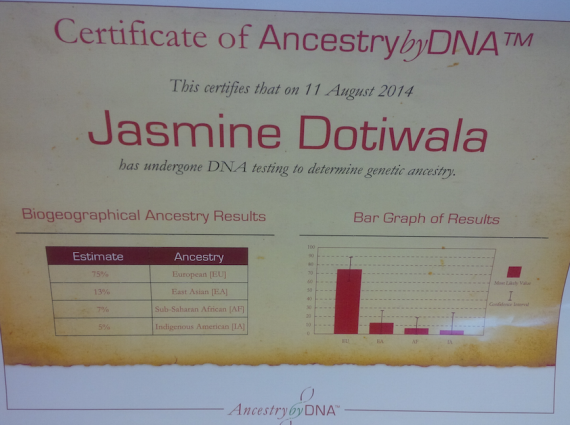 Do you know who you really are and where you came from? No. Really.

Every time I would ask my African Americans friends where they were originally from, they’d always insist ‘America’. Even though I’d question that they most likely had a journey across from the Caribbean or Africa at some stage in their lineage, they’d flatly deny that history, and say their ancestors as far back as time could tell, stated they were American and that’s what they were comfortable with.

Some may be happy with this; others may want to find out where exactly from the motherland Africa they are from. Maybe there isn’t a direct line of family history or you are adopted and curious to know more.

However, if you’re going to get your DNA tested, you’d better brace yourself for the results. A tester revealed to me that a young wealthy Muslim man came in to have his DNA tested for his birthday and found just two generations earlier he has Jewish roots. He was shaken to say the least.

The pro’s and con’s of the test raced around my mind. What if I could make a real connection to my past? Could it reveal something interesting about my ancestors or better yet me? This information is easily accessible in my DNA. Most people think they know their family history but what if there’s more? It could redefine the way I think about my family history. Learn about all the places and cultures that make me who I am. It’s a great way to get in touch with who you are and your family story. What’s my ethnicity? Where am I from? The answer is literally at my finger tips- in my DNA. So I can trace my family’s generations throughout the ages way beyond the paper trail. DNA testing has evolved so quickly in recent years that DNA testing like this wasn’t even possible a few short years ago. It seemed too good an opportunity to miss.

I found out about it at the London launch of osargenews.com, an African Diaspora news aggregator delivering news twice daily to all African and African Diaspora countries.- the site offers news, blogs and original content and covers politics, business, arts & entertainment, technology, society and local information along with a recruitment section, documentaries of the diaspora and ground breaking DNA testing products. As my father is from Kenya I was intrigued. Yes, was that kid that pushed all the buttons that I was warned not to.

I’d seen it on television and read about in the newspapers, and it makes you think twice. For those who aren’t keen on needles, the good news is that all commercial testing companies use mouth swabs, so the whole process is blissfully painless. A friendly lady handed me a few ear bud like swabs and rubbed them inside my cheeks and popped them into a sealed envelope- which I had to lick and seal myself. Two weeks later my results were in. They compared my unique DNA to billions of people all around the world to find the common strands that help define our ethnicity and where we are originally from.

Genetic testing has become the new middle class trend in recent years. Does the birthday boy have everything he could ever want already? Coffee maker, Porsche, personalized Louis Vuitton luggage, Rolex watch, a day at Silverstone, and a season pass to his sports team’s games? Well give him something that money can buy! His own DNA ancestry test! Show him who he really is. Does he descend from kings or….

DNA testing is a big thing for the National Health Service too. This month in the UK, it has been announced that our government would be spending on new medical DNA testing so that they can better understand the genetic lineage of people who are ill and determine if they’re prone to certain diseases. The UK is set to become the world leader in groundbreaking genetic research into cancer and rare diseases, which will transform how diseases are diagnosed and treated, thanks to a package of investment worth more than £300million, the Prime Minister announced this month. If you are part of a group who is at a high risk for certain genetic diseases (such as Tay-Sachs for Jewish people and Sickle-Cell Anemia for Black people), it is imperative that you get tested before you have children. This can save so much heartbreak for you and your family, but also makes you aware of the possibilities out there before making a life-changing decision. After having her DNA tested — a process which can cost anywhere from a hundred dollars to several thousand — Angelina Jolie learned that she is a carrier of a defective BRCA1 gene. That defect, though not the only determinant of breast cancer, meant a 65% chance she’d get the same disease that killed her mother. Some DNA tests do focus on testing or health, the one that I had done focus’ on my genetic ancestry.. 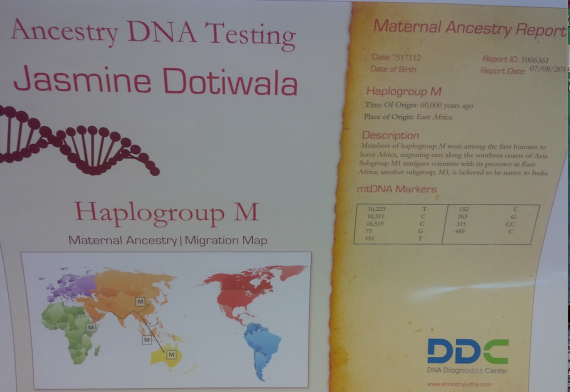 I kept being warned that my results might surprise me. In the case of many African ancestry tests, for example, approximately 25-30 percent of those tested will learn that their paternal line is European in origin. This is the legacy of plantation society coming down to us in our genes, and was seen in BBC’s ‘Motherland: A Genetic Journey’.

Frankly you could have told me I was from anywhere globally and nothing would’ve been a shock or surprise one way or the other. I have Persian ancestral and religious background. Persians were thrown out of Persia years ago and it was renamed Iran. So I’ve always seen myself as a bit of a refugee. I feel like I belong to everywhere and nowhere. But I am curious to know to get an idea of geographical origin well before genealogical records began.

Two weeks after my swab results came back from the laboratory, I sat down with Dr Michael Baird, one of the world’s leading human geneticists, who explained my results to me after I grilled him on the procedure and why it was so new and current for people of African heritage.(Look up Dr M Baird- he is a huge international DNA expert, that’s been used at the centre of huge legal cases like Anna Nicole Smith/ OJ Simpson etc)

Tell us in layman’s terms about the new African Diaspora specific DNA testing products exclusive to osargenews.com and what is possible now when it comes to finding out about our historical and ancestral roots? How does it work?

Our DNA contains a great deal of information including where we came from. This is because DNA is passed along from generation to generation and characteristics of our ancestors are still present in our DNA, if you know how to unlock the information. By collecting a few cells from the inside of your cheek, enough DNA can be isolated to perform a number of tests that can start you on your journey to learn about your ancestral roots. Once your sample arrives at the lab, DNA is isolated and testing performed that can provide information about your ancestral roots. Depending on the test you choose, you can learn about what biogeographic groups your DNA contains, information about your maternal and/or paternal ancestors, or what current populations you most closely resemble. You can choose the path you want to take for your journey to discover your ancestral roots.

Why is this a relatively new area that the AFRICAN DIASPORA should be interested in?

Advances in DNA technology allow one to more accurately extract information from your DNA to answer questions you may have about where you came from. Recent work with African populations has contributed to the ability to make connections that were not possible previously. The osargenews.com site provides useful information about a number of different aspects related to the African Diaspora including DNA tests that can help in the journey of understanding.

How does the African GPS Tracking System work?

The GPS (Geographic Populations Structure) is a new way to analyze DNA data developed by Dr. Eran Elhaik of The Sheffield University that can provide coordinates to pin point the geographic location of your ancestors. The same type of sample is collected for the GPS test but can provide results for male and female lineage, people that may be biologically related as cousins, and the geographic location of your ancestor(s).

Have the global African diaspora been open to finding out about their ancestral past or have some people shied away from the truth as many stories have come from centuries of pain historically?

The journey required to find one’s ancestral roots is a personal journey. Many have embraces the science behind the testing and been able to make meaningful connections with their past.

Are there examples of case studies that have shocked or been a surprise to people interested in finding out about their historical roots?

I do not have any such stories since we do not typically follow up with clients once they have received their results. However, I am sure there are surprises among those that have taken DNA tests.

Africa has tended not to have a global voice for so long and for so long been painted in a disproportionate light by western media and governments- why do you think this is?

Hopefully as people embrace their African roots, their voices will be heard.

What should the western world be aware of when it comes to the massive ground breaking strides forward that the African continent is making?

The continent of Africa will play a major role in the future of the world, just as it did as the birthplace of humanity.

Any final comments on how people can get involved?
If people want to start their journey of self-discovery of their ancestral roots, they should get involved with appropriate social media sites like osargenews.com and consider having their DNA tested.

My own results? I was handed and talked through a stack of easily understandable graphs and certificates that are fascinating. I come from the M group who were around 60,000 years ago and originated in east Africa. My ancestors were amongst the first humans to leave Africa, migrating along the southern coasts of Asia. My bio-geographical chart showed, surprisingly, that I am 75% European, 13% east Asian, 7% sub-Saharan African and….5% indigenous American!

Another surprise was that my high-resolution native population match showed that my DNA matches mostly from the Maldives, India then Europe. My high resolution world match results come in high from Mesopotamia – the name for the area of the Tigris–Euphrates river system, corresponding to modern-day Iraq, Kuwait, the northeastern section of Syria and to a much lesser extent southeastern Turkey and smaller parts of southwestern Iran. Finally they also gave me my genetic profile, which is unique to me and me alone. Honestly, to an untrained eye like mine it just resembled numerous car registration numbers like codes but was nevertheless fascinating.

So no huge surprises for me, aside from a bit of American Indian and Maldivian roots. But for my friend- the writer and comedienne Angie Le Mar it was deep and emotional. Angie hails from Jamaica but her tests came back showing that her bloodline was pure, and much less mixed than mine, and came from an exact location identified in West Africa. She’s always had a pull towards Ghana so this confirmed her instinct.

So, what to gift the person who has everything? Tell them who they really are!The test costs around £250, half the price of those costly Louboutin designer shoes!
What’s really exciting about DNA testing is that it’s all about YOU!

Start your research at osargenews.com. You never know what you might unearth! Good luck!