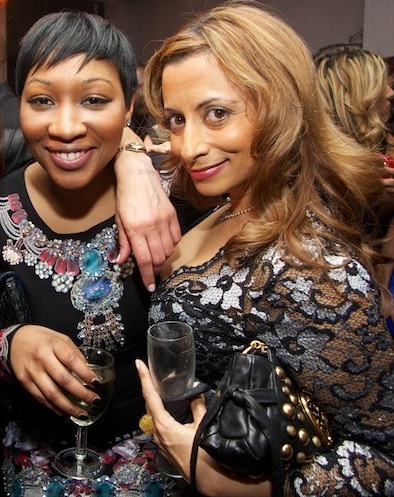 JASMINE WITH ONE OF HER FAVOURITE UK VOICES- TERRI WALKER!

This is an act with legacy! Anyone who knows Terri, knows that a live show means you are going to be entertained by an artist who is undoubtedly one of the most respected and loved female vocalists in the UK, purely because she ooze’s experience and never fails to delivers an immaculate and seamless performance.

This past weekend, Saturday 26th April, the destination was Shoreditch House. Invited guests were gathered in what can only be described as a fabulous and very large drawing room with a DJ booth and bar.

The warmth in the room was clear, you were there to see a class act, and have probably supported her journey from the early days. The scene was set and Terri took to the stage.

Performing several tracks from her forthcoming Album ‘Entitled’, Terri completely engaged with her audience from get go. Every song was executed as if performing in an auditorium for thousands. Not even needing to take a sip of water between songs, she glowed with confident in a way only Mz Walker knows how…..smiles, conversation, improvisation, gestures……..all the things that compliment the personality of Mz Terri Walker.

Her longevity isn’t down to a million record sales, TV appearances, touring the world or compromising her music, but clearly because she commands attention and over the years has been endorsed by some key industry taste-makers. She is now taking ownership of her career path and choices, simply because she is gifted and royal and….she can!.

Also listen out for The Terri Walker EP produced by the almighty Joe Buhdha @joebuhdha.

I caught up with Terri afterwards to hear a bit more about the latest album title/style and tone….

”Oooh where do I start.Well I’ve decided to christen my 4th solo studio Album “Entitled”.The reasoning behind this was of the experience I have gained throughout the years.
My debut was 11 yrs ago and was entitled “Untitled”.I was fresh in the game and didn’t know much.Now through all the hurdles and different situations I put myself through to get here ,I believe I’m entitled to be here.
The style I would say is on a live hip hop rocky tip.Think Rick Ruben with a bit of Quincy Jones on production.
Im telling stories about how I felt or how I saw things and still see things at times.
The tone is definitely a serious one with undertones of wit.
Regardless of what track you hear the common denominator that pulls the whole project together is me.I just use different soundtracks to convey my stories”.

The latest album see’s Terri go back to being as real as can be.

”Its crazy when I listen to my 1st album ,I feel like I’ve come full circle.
I let a lot of opinions veer me off my ultimate goal.I always just wanted to make honest real music and not really focus on the hype. I think me experimenting with different genres has helped me become a more rounded artist who knows exactly who she is.
I see myself as an instrument but with the tools of a storyteller”.

”The vibe for me is more raw and less sugar coated.Ive become grittier in my development and I wanted to showcase that with my sounds and content. Hence why a lot of the album is live based.
Im writing about my life ,some of the things Ive been through.Things I get up too etc.A lot of the songs have multiple meanings which I purposely done.I want people to listen to it and take from it what makes sense to them.
They are ultimately written from my view point but people will always take from it what they want”.

We discssed that there are barely any females in the music charts that are soulful anymore. Where are they all? Do women get as fair a playing field as men?

”I’m going to be honest with you,I don’t really pay attention to the charts . When something excites me Ive usually seen it on a blog or heard it from word of mouth. Most things I love probably wouldn’t chart now a days.To be honest again Ive had to be tough and not listen to too much other artist’s as I don’t like to be influenced in any way unless I seek it out on purpose.
I think when you make great music there is no playing field between the sexes.Only if you are trying to compete and are running with a formula.Most artist I would have an interest in wouldn’t be focusing on getting that hit. Its obviously amazing to have one but the moment you make music geared towards that it usually is soulless . So to me music is alive and kicking from all angels. Just depends on where your looking”.

Last Words?
”Pay attention to my networks and have an open mind to listen.I may make you see yourself in me .Then we can vibes together!Ha!”