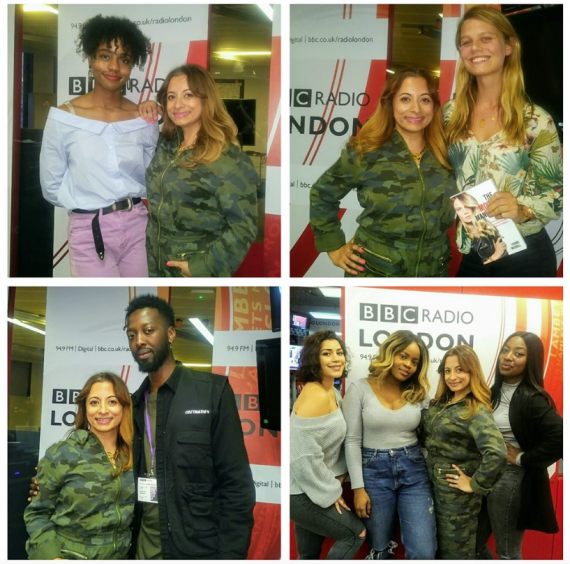 JASMINE WITH THE SCENE GUESTS…… 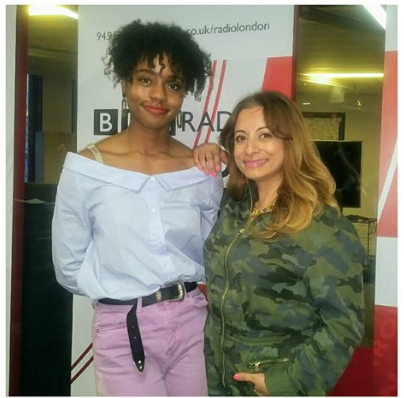 First on the show is Cherise Adams Burnett who surprises listeners with her infectious laugh and energy. Cherise from Luton speakers on the diverse and culturally rich area and how much she loved living there as a child. However, to pursue a serious career in music she left her comfort zone at the age of 18 and moved to South East London to give it a shot!

The world of Jazz, Cherise explains, is an elitist genre of music that makes it hard for underprivileged and younger people to begin a career in. However her early love for the music would fuel her to approach South-East London based organisation,’ Tomorrow’s Warriors’, an innovative artist development organisation giving free tuition to women and those from the African diaspora. They took a shot on Cherise, and now she urges young people trying to enter the Jazz industry to approach them!

Cherise recently won vocalist of the year at the Jazz FM awards, something she says she did not expect – or at least she tried to bury any competitive mindsets and focus on having a good night out with her mother! She goes on to reveal that due to her class and financial status, she never believed she would end up being a Jazz singer. Humbly, she thanks everyone who invested in her even when she didn’t have the money to pay back.

Cherise expresses her gratitude towards a new, growing community of young jazz musicians who are challenging the elitist attitudes to genre of music. She says to get support, there are loads of young instrumentalists to get in contact with such as Moses Boyd and Femi Koleoso. To get into Jazz, Cherise says that once you find one of these people, you find a whole community and are pretty much sorted! We guess the rest is up to you!

For young people wanting a relaxed night of Jazz, Cherise recommends some great places to go to including The Royal Albert in New Cross on a Sunday night, The Albany after 11pm and plenty more that you can check out here.
Find Cherise on Instagram at @cherisemusic and on her website https://www.cherisemusic.com/.
———————————- 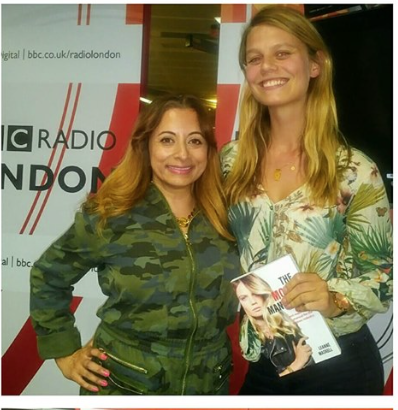 Next to bless The Scene with uncensored and critical information that she believes all young models need to know is Leanne Maskell. She is former Vogue, Asos and London Fashion Week model and now author The Model Manifesto, an anti-exploitation guide for young girls trying to navigate the industry.

Cyprus born Leanne unexpectedly began modelling at the age of 13, but had never really considered as she was being bullied for how she looked in school, being tall, having a lisp and even being told she has ‘yellow skin’. After her parents divorced her mum took her to the only modelling agency local to her in Cyprus. The goal for her mother was not play about, but to try to make some real income for the family.

Leanne speaks on her lucky break, revealing that in her very small Island of only 800 thousand people, she was probably the only tall, blonde girl and was able to easily infiltrate the modelling industry. However, for people in places like London, she explains that 1% of hopefuls will be signed to an agency, and only 1% will have a moderately successful career. Though her mother managed her as a child, she truly began her modelling as a career when she arrived to London. Leanne admits however that she never really enjoyed it, but believed this was her identity and knew subconsciously it’s what people knew her as since she was young girl.

Leanne says there are dire mental and health effects that come from modelling, and believes there should be a strict age limit of 18 to protect young girls from the dangerous expectations that agencies have of them. She recalls a girl believing she was fat at a size 10 and says for girls who start out with young, tiny bodies, the pressures start to mount when their womanhood begins, causing them to put on weight in parts of their bodies that aren’t typically visually appealing to agencies.

She also speaks of how tiring modelling is, referencing 14-year-old Russian model Vlada Dzyuba, who collapsed and died after walking off a runway in Shangai during a 13-hour-shift. Vlada who apparently was ‘too afraid’ to say she was feeling unwell was found to be suffering from severe exhaustion.
26-year-old Leanne put an end to her modelling career at the start of 2019, freeing herself of the mental and emotional burdens that the industry had imposed on her. Though having a successful 13-year career, she says she did not enjoy any of it. Responding online to questions demanding to know why she stayed, she says, “Modelling is very addictive as it becomes your entire identity and I couldn’t really see a way out. It is really hard not to get pulled back in with the seemingly high rates of pay and addiction of being accepted by strangers.”

Her book details gruelling treatment she was subjected to from being told to lose weight whilst already being severely body dysmorphic, dealing with uncooperative agencies who would not take into consideration that she was studying and even having her tights changed by two men at once. But although The Model Manifesto boldly and bravely speaks on the truths about her previous agents and experiences, she does admit that she has a whole section in her book showing gratitude for the things she has learned.

Leanne ends her time on The Scene by explaining the industry concisely, saying that agencies simply see models as can of beans rather than real people, constantly throwing them in unforeseen situations with no humanistic compassion or protection. Consequently, these human beings become like children, heavily dependent on the protection and the validation of their agencies whilst being taken advantage of.

Find Leanne’s heart-wrenching book on Amazon, and read more about her on her website and at @TheModelManifesto on Instagram 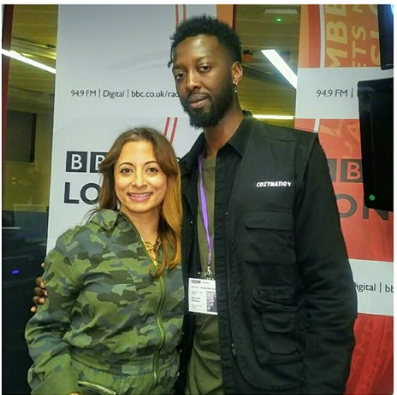 Next up, a nifty pioneer and award-winning GUAP magazine co-founder – Ibrahim Kamara. GUAP which is an acronym for ‘Great Understanding And Power’ is a cool and funky magazine made to inspire and entertain young London creatives.

But GUAP is not your traditional print platform; rather it is an ‘augmented reality’ magazine – and the first one in the world! Allow us to explain. The magazines are distributed freely at launch events, and works by scanning your phone over any page. A video then comes to life on your actual phone allowing you to see unique content. There is no need to hover your phone over the page, once your video starts to move, you are able to go away and watch the rest of it!

Ibrahim who also self shoots on his magazine as well as directing a team of contributors says that his platform is one of the only ones that appeals to young Londoners by building a genuine community rather than wanting to work with brands first and foremost. He has however worked with plenty, ranging from Nike, Adidas, the Evening Standard, NME and more.

Ibrahim who has never actually had a job and works on GUAP magazine full time has been honoured as a digital pioneer by the Mayor of London and Top 100 Most Influential BAME leaders in the U.K. He attributes this the vast London creative scene, explaining that there are a lot of young people who are now able to garner audiences that traditional brands have not in the past been able to.

Modestly, Ibrahim says “Obviously the achievements are good but that’s not what we’re focused on”, and adds, “I don’t feel pressure because I’m not doing this for others to see what I’m doing”. He says he has a set vision and many other goals and aspirations. Some of them include making a creative space at The Roundhouse and one day he hopes access one million people. Ibrahim says it’s a ‘slow and steady journey’ and vehemently insists that he will never feel pressure to conform to a creative rat race industry. He is simply grateful that he is currently able to live off of his magazine. 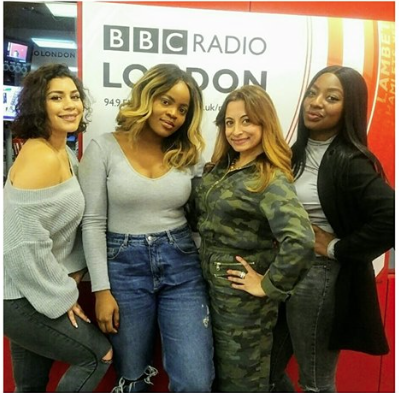 JASMINE WITH THE LADIES FROM ”THE RECEIPTS PODCAST”ON THE SCENE- BBC RADIO LONDON!

Last to bless The Scene are the Destiny’s Child of the podcast world. Audrey who describes herself as a ‘professor of Wig-ology’, Milena who refers to herself as a hot mamacita and Tolly T who ‘ain’t payin’ for NO date’!

The women form ‘The Receipts Podcast’, a leading podcast that started in 2016 when the ladies realised that there were no people covering their types of experiences on radio. They decided to take to Twitter to tell their unique and funny life-lived stories, building a no-judgement zone and a place crack a bit of banter with people who could relate.

They said they were encouraged to then start the podcast when a similar male version commented on their Twitter conversations, challenging them to start recording their conversations on a wider and more open medium.

The ladies, who were once a group of 5 set up a meeting in a coffee shop where they ended up speaking for hours on end. Finally being kicked out and told they needed to leave – they realised they had to go through with the idea. They recorded a pilot episode which Aubrey says was a ‘shambles’, but finally were able to whittle the group down to the three ladies who were committed to making the platform a success.

Before settling with the now famous name, they admit they had gone through a plethora of potentially awful branding, nearly calling themselves ‘Predrinks’ and ‘Can’t deal’. But after coming across a video of Whitney Houston being accused of something in an interview and clapping back with the line “where are the receipts?” they knew they had to go fourth and let the world know that if anyone has receipts, it’s them.

The bubbly girls whose podcast is almost a London version of Sex and The City say their Whatsapp group chats are filled with ‘consistent, high grade filth’, but is also a real and unfiltered representation of their personal lives. They jokingly (but quite seriously) name Beyonce, Cardi B and even Celine Dion as some of the names they would love to have on the podcast one day.

The ladies speak truthfully on the goal behind all the banter – they want to normalise conversations surrounding sex with women and empower more introverted females, enabling them listen in and have their views corroborated by people who are unafraid to say things like – in the words of Tolly T – ‘faking orgasms is rewarding men for bad behaviour’.

The Receipts Podcast which has featured episodes such as ‘My Family are Racist, ‘He Keeps Giving me STI’s, ‘I cheated on my boyfriend with a pastor’, and ‘Should I Fake my Orgasms’ is now up for a British Podcast Awards for Relationships and Sex, and the girls have a little giggle whilst asking The Scene listeners to vote for them.. No seriously – go vote now! They’re amazing!
Find their hilariously entertaining show here and follow each of the ladies on Twitter at @tolly_t, @ghanasfinestx and @milenasanchezx