Ever since I can recall, the men I have been surrounded by from family, to friends to work colleagues, to random strangers, have cited The Godfather as being ‘one of the best films ever’. 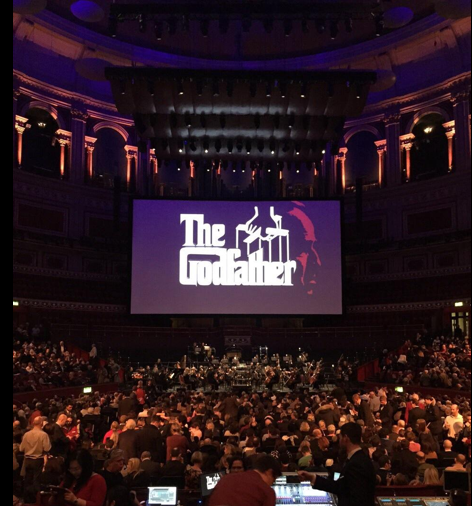 I think it’s to do with the testosterone filled themes of loyalty, brotherhood, vengeance, manhood, and lawlessness and of course the bad boy swagger factor.

So when trying to get to grips with this movie from a female angle, the lure of viewing it on one of the biggest screens in the world, at one of the most stunning venues and accompanied by a live orchestra, the temptation was all too much.

I’m embarrassed to say I only recently came upon the fact that these film events happen at the venue, after living in west London my whole life. But now that I know, I’ve been raving about them and been a fan of the venues fabulous film events ever since. So far I’ve taken my mum (Gladiator), my Godchild (Frozen) and my partner (The Godfather)!

Mum and my other half had never been there before but the showing of many of the venues movie runs, like The Godfather live with orchestra, is a great example of something anyone from any background, class or culture would love. If you want to experience the Royal Albert Hall but aren’t sure if the events are for you this is the type of easy break-in event that would show you just how inclusive the venue is.

Only this week, after Asian actress Meera Syal appealed for theatres to look more to Asian audiences, all hell broke loose as One of Britain’s most distinguished actors dame Janet suzman, sparked controversy on Monday by claiming that “theatre is a white invention” and it is in the DNA of white people, but not of other people. “Theatre is a white invention, a European invention, and white people go to it. It’s in their DNA. It starts with Shakespeare,” Suzman said.

Before you could say Othello, talk radio and print press were up in arms, with the black community calling / writing in to state just how wrong Dame Suzman is.

There are many reasons London’s theatres aren’t filled with BAME audiences but this blog isn’t where I will address these issues aside from mentioning (cos I just can’t help myself) ….Often the content doesn’t speak to them. The tickets are pretty pricey. The plays aren’t promoted to these audiences. Audiences like to see themselves represented onstage too and so feel alienated when it’s a totally white cast. You only have to go to Hackney Empire or Shepherds Bush Empire on certain days to see the venues packed to the rafters for black comedy events by Alpo or Kojo, or plays by Angie Le Mar to see that there are huge ethnic audiences for theatre …but I digress!)

THE GODFATHER, released in 1972 to popular and critical acclaim, tells the story of the Corleones and their rivalry with other New York crime families between 1945 and 1955, as the title character (Marlon Brando) hands over the reins of power to his youngest son (Al Pacino). It also stars James Caan, John Cazale, Robert Duvall and Diane Keaton; the film won three Academy Awards – including Best Picture and Best Actor (Marlon Brando) – and established Coppola’s reputation as one of the exciting new breed of directors who revolutionised Hollywood from the late-1960s onwards.

The opening shot of the film is a long, slow pullback, starting with a close-up of Bonasera, a character who is petitioning Don Corleone, and ending with the Godfather, seen from behind, framing the picture. This move, which lasts for about three minutes, was shot with a computer-controlled zoom lens and is even more impressive from any seat at the Royal Albert Hall, where frankly there’s not a bad seat in the house.

In 2008, an Empire magazine vote saw The Godfather named as the greatest film ever made, a distinction also awarded it by Entertainment Weekly and Metacritic. It came second in Sight & Sound’s 2002 list and Time Out’s 2003 readers’ poll, and is currently ranked at number two in IMDb’s all-time list.

Seeing this dramatic action resurrected in this electrifying venue is an experience in itself, but watching Composer Nino Rota’s dark, looming, elegant music come to life in front of you is mesmerising. His music for The Godfather, including its immortal Love Theme, was ranked at #5 in the American Film Institute’s list of the greatest scores ever written.

Conductor Justin Freer lead a live orchestra performing Nino Rota’s immortal score and the audience gave them a deserved outstanding ovation at the end.
Justin told us: “It is with great excitement that we are able to bring this masterful score and film to the Royal Albert Hall. That we are able to preserve and present some of the most cherished music in the history of our craft is both exhilarating and humbling. “There is little film music as instantly recognisable as Nino Rota’s opening music played on trumpet, and only a handful of films as masterfully made as The Godfather. The marriage of these two masterpieces on stage live at Royal Albert Hall will be something to remember.”

I don’t think The Godfather has ever been seen, or heard, like this before. All in all it was dramatic, surreal, breath taking, romantic and a classic experience set in stone. Watching the Corleone family on a 100-foot tall screen certainly beats the 50-inch screen that my uncle brags about.

If you’ve never been to the Royal Albert Hall for whatever reason think again. Future events include similar screenings of Gladiator, JJ Abrams’s Star Trek and Star Trek Into Darkness, and West Side Story.

I’ve always been a great believer of gifting people experiences rather than materialistic things, and who isn’t into movies, music and gorgeously fab locations? It’s a triple threat winner!