Much of the London urban scene came out to support singer Terri walkers show at Under The Bridge at Stamford Bridge- home of Chelsea football club. On the support act bill were acts that Terri had hand picked herself after seeing or hearing about them. Supports were: Dora Martin, Akelle Charles, Hayley Cassidy and Call Me Unique. They were all as expected, uber talented. 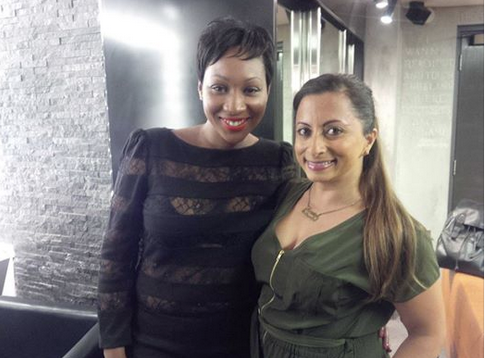 Terri performed her new music to a buzzing crowd of London’s trendiest fly crew who included actors like Jay Brown, Aml Ameen, Femi Oyeniran and more, other singers like Roses Gabour, photographers to the stars like Richard Pascoe and Paul Hampartsoumian. bloggers, vloggers and more. 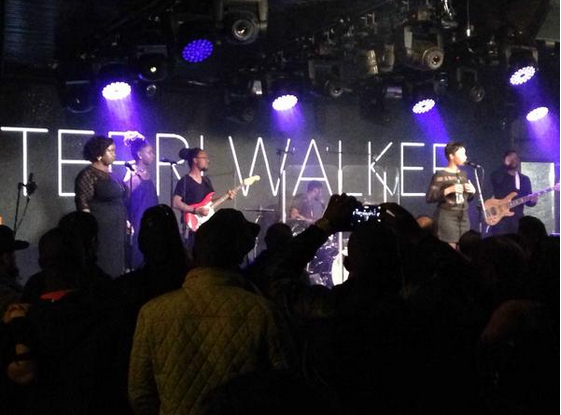 TERRI DOES HER THING ONSTAGE.

Rocking a classy black dress that showed off her voluptuous curves to their full effect, topped off with fierce leopard print shoes she sang her heart out for which the applause and whoops were loud! 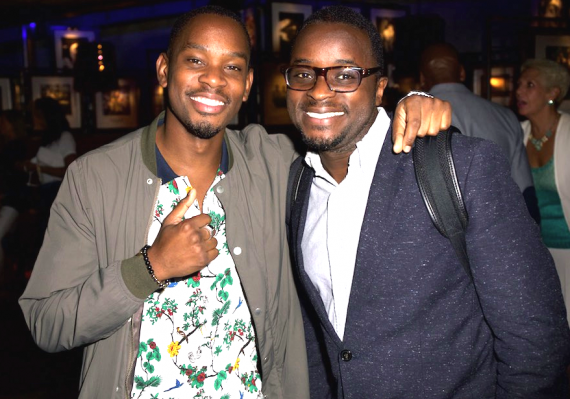 Cheering along were Hollywood actor – hailing from good old London town- Aml Ameen – who told me he’s been ultra busy with work, which includes Sense 8 (Netflix Series by Wachowskis, creators of The Matrix), he is playing one of the leads in this show. https://www.youtube.com/watch?v=iKpKAlbJ7BQ

Fellow actor, director Femi Oyeniran confided that he was just finishing up editing his next film. 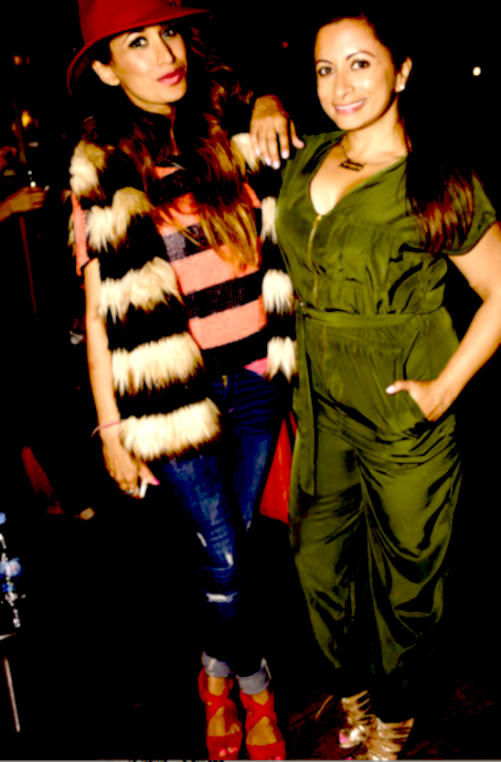 Actress Preeya kalidas was on a high after revealing to us all that from later this year she has signed up to host a Saturday afternoon radio show for BBC Asian Network. 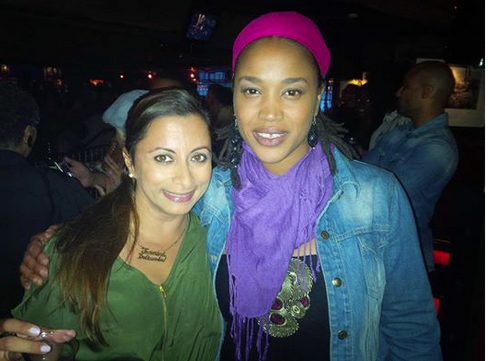 JASMINE WITH ONE HALF OF GRAMMY AWARD WINNING FLOETRY – NATALIE STEWART!
PIC – R.PASCOE.

I was most excited to see one half of Grammy award winning act Floetry, Natalie Stewart, in the house. Not only did she have the crowd buzzing with her presence, she also joined Terri onstage for a wonderfully powerful vocal duet. It was like rainbows, waterfalls and fire all in one. Natalie and I chatted about her return to the UK and she mentioned that she was passionate about bringing together a new UK movement that would unite the soul music community and singers again. 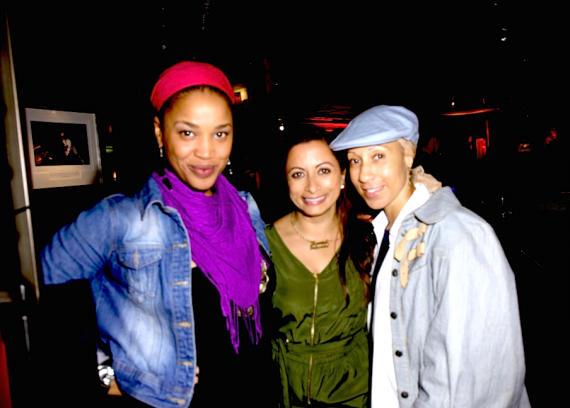 Fashionable fly miss Roses Gabour and the rest of the crowd were left on a high after Terris knock out set!

Terri also has a new album coming soon titled ‘The Champagne Flutes’ album for 2016, a body of works produced by Salaam Remi; and there’s definitely a collaboration on the horizon with the Floacist!

MTV Shuga is a TV series in its 4th season – a sizzling sex and relationships drama and multimedia campaign for young audiences, which aims to raise awareness of HIV and Aids. 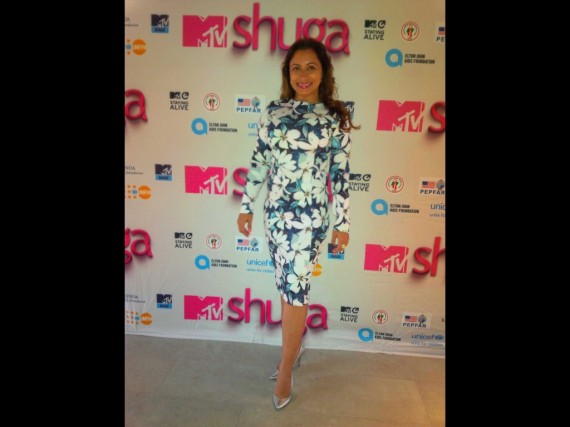 For over a decade MTV has stuck with this area in helping youth across the globe get more educated about HIV and Aids instead of being distracted by more western youth culture issues like cyber bullying and depression, which might be what more British / Western youth are affected by.

Only this past week Sir Elton John had a meeting at his Windsor home, to gather leaders across the world, that can help use their business power to help LGBT rights and help end aids around the world. Music stars are now more than ever involving themselves in pro-social causes.

With recent HIV and Aids diagnoses being confirmed in London being higher than recent years, we should question why HIV awareness being talked about more in the UK?

Shuga season 1 started in Kenya then in later series moved to West Africa to Nigeria. Does this continue to make HIV seem like an African problem when recent numbers in cities like London have risen? Maybe, but its necessary as apparently when it comes to young people contracting HIV over 10% are located in Nigeria.

The show fuses world-class storytelling and believable characters to explore themes that include sexual relationships, domestic abuse, the stigma around HIV, and accessing support services.

And its not just TV entertainment. It actually translates into young people going to get themselves tested and using safer sex methods. During the last 12 months MTV Staying Alive Foundation has expanded the Shuga campaign through the development of a peer education programme and festivals aimed to get 25,800 young people tested for HIV – they have nearly doubled that figure by testing 47,642 young people over four months – 84% more than their initial target. These numbers were achieved by the brilliant work of their specially trained peer educators, counsellors and clinic staff, as well as the successful promo opportunity to win tickets for one of the MTV Shuga Festivals after visiting a health clinic.

Off screen the MTV Staying Alive Foundation, who make this show and are behind the campaign, creates and distributes challenging and entertaining HIV- prevention content across MTV channels and with third-party broadcasters, while finding and funding young leaders who are tackling the HIV epidemic in their own communities.

To date, MTV Staying Alive Foundation programming has reached 100% of the top 50 countries affected by HIV, and has awarded 500grants in 66 countries around the world, distributing over $5 million to grassroots HIV-prevention projects and directly benefitting 2.6 million young people.

Shuga is also credited with the discovery of Hollywood actress Lupita Nyong’o in its 2009 Kenyan debut season so its responsible not only for making stars but also for helping keep their communities and peers alive!. 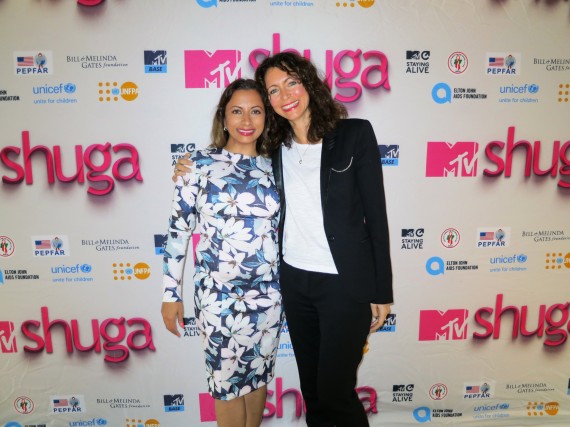 Georgia Arnold Executive Director at MTV Staying Alive Foundation told me: “MTV Shuga has exceeded our wildest expectations; we started out with a TV show that had a simple aim of relaying HIV-related issues to its audience in a relatable way, a concept that has developed into a multimedia awareness- building powerhouse! In the past 12 months we’ve expanded the campaign through the development of a peer education programme and festivals. We’ve covered incredible ground with MTV Shuga so far, and I’m thrilled that season four is ready to take the world by storm!”

Capital Xtra held their ‘’unleashed’ music showcase at Koko in Camden where music acts Melissa Steele, Nick Brewer and Krept and Konan with Stormzy jumped onstage for a big night. 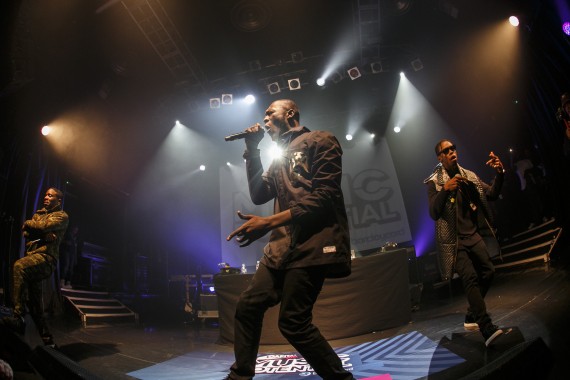 The ‘Unleashed’ Showcase was the culmination event for the pioneering and hugely successful youth music programme, Music Potential, and was hosted by my old New York work buddy Jez Welham and afrobeats champion DJ Abrantee. 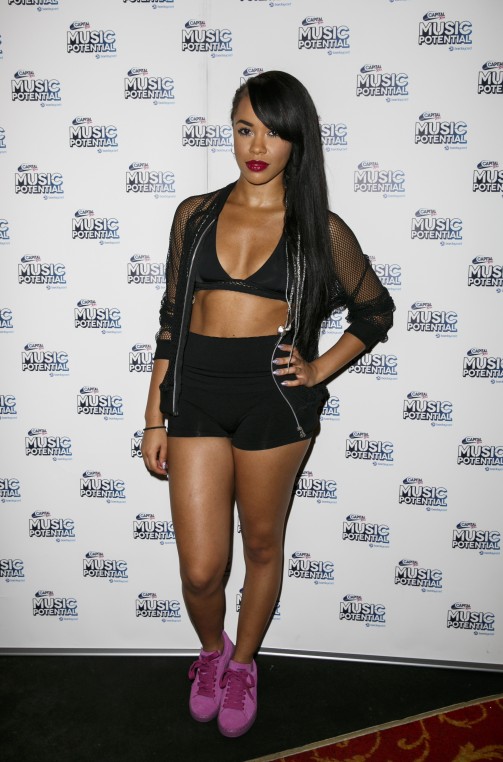 MELISSA STEELE WAS BRILLIANT KEEPING THE AUDIENCE SINGING AND DANCING ALONGSIDE HER at Music Potential’s ‘Unleashed’ Showcase. .

Now in its fourth year, Music Potential supported by Barclays, helps 16-25 year olds who are not in employment or education to develop the necessary skills and experience to build a career in the music industry. 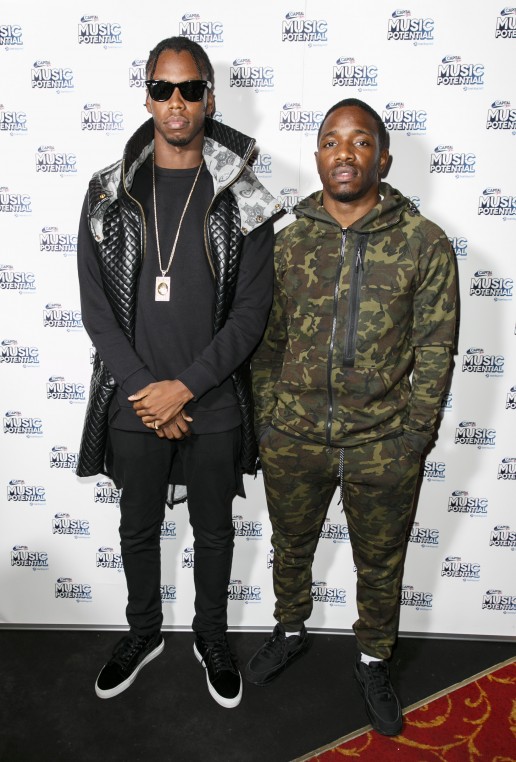 The event showcased Music Potential’s budding talent and encouraged participants to ‘unleash their potential’, as they continue their journey into training and employment.

THE BOYS UNLEASH THEIR HITS ON THE KOKO CROWD at Music Potential’s ‘Unleashed’ Showcase. .

The performances were followed by a DJ set from one of my favorite turntablists – Manny Norte. Some of this year’s rising stars onstage included Madison Hall and Dee Ajayi performed live on stage alongside Melissa Steel and Stormzy. 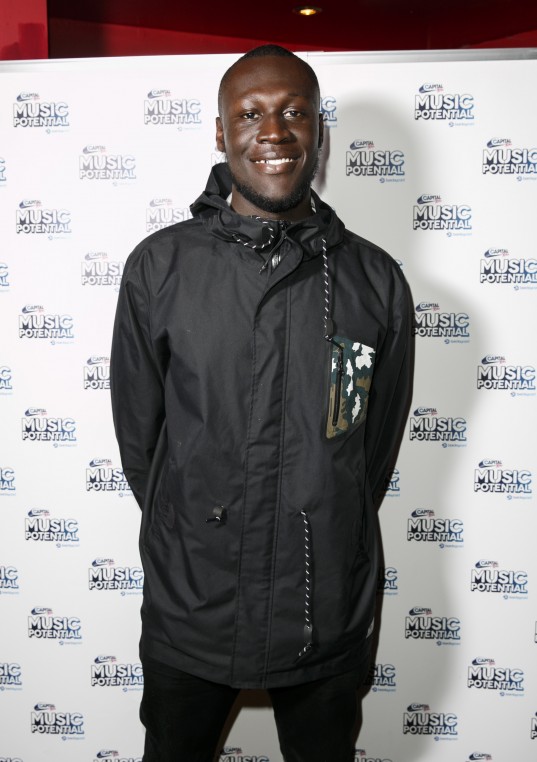 STORMY’S ALL SMILES ON THE RED CARPET at Music Potential’s ‘Unleashed’ Showcase.

The ever polarizing Tim Westwood, Capital Xtra presenter and Music Potential ambassador, said: “Our Music Potential youngsters absolutely smashed it. This incredible programme gives emerging talent of the future a platform to get their music heard, along with the best advice from some of the top people in the industry.” 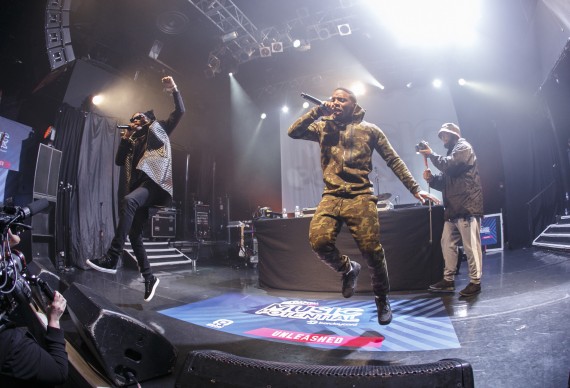 Emma Bradley, Director of Global charities and communities said: “Capital Xtra’s Music Potential has helped more than 1,700 young people learn new skills and gain experience to help them get into the music industry or other employment. It was brilliant to see the next generation of industry talent last night at our ‘Unleashed’ Showcase event.” 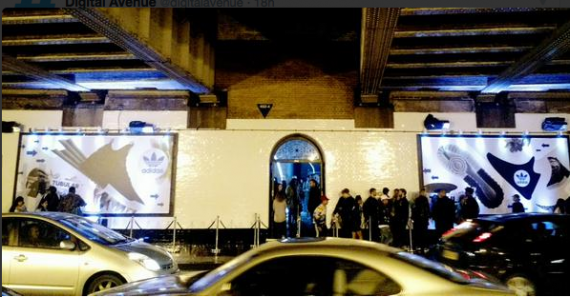 DJ’S worked their magic for the room which saw high flying key influencers from the digital and fashion worlds partying together. Names like Wretch32 and Example were in the house having fun too. A typical uber cool adidas function! 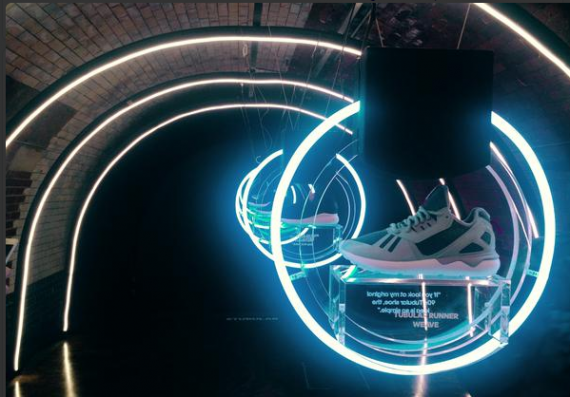 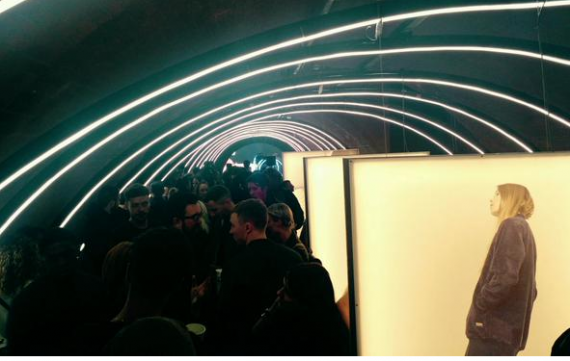