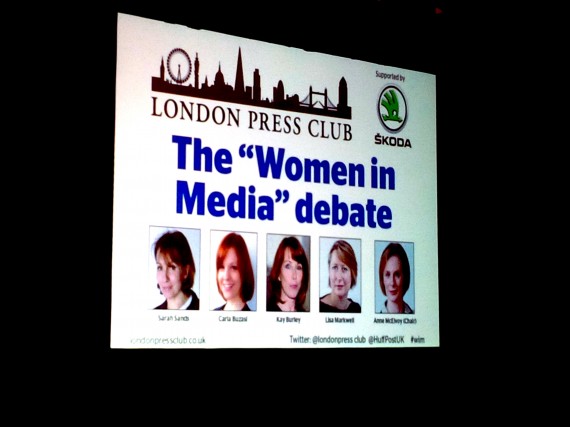 A very elite set of leading women, from the world of UK media gathered at the grand stationers hall in St Pauls this week, to debate the experience of ‘WOMEN IN MEDIA’. In association with Huffington Post and the London Evening Standard, leading figures from TV, print and online addressed the role of women in media. After the obligatory glass of wine and female laughter filled reception, around 300 women were seated in anticipation to hear 5 very accomplished panellists speak. Anne McElvoy, very slickly chaired a top-level panel, featuring London Evening Standard editor Sarah Sands, Huffington Post UK editor-in-chief Carla Buzasi, Sky News presenter Kay Burley and The Independent on Sunday editor Lisa Markwell. After our brief welcome by the chairman of the London Press Club Doug Wills, it was straight into hearing the five leaders speak about their adventures, personal anecdotes and confessions. 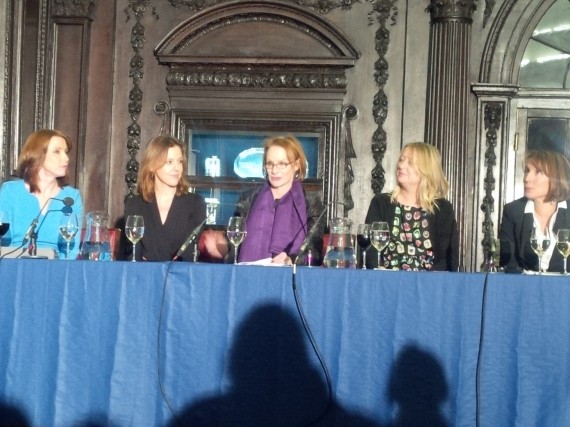 London Evening Standard Editor Sarah Sands was optimistic about what its like for women in the media, coming from a brand like the Independent group, where there are 2 female editors and 1 non-white editor. Her company clearly, openly and proudly engages in diversity whilst placing the best people in top roles. 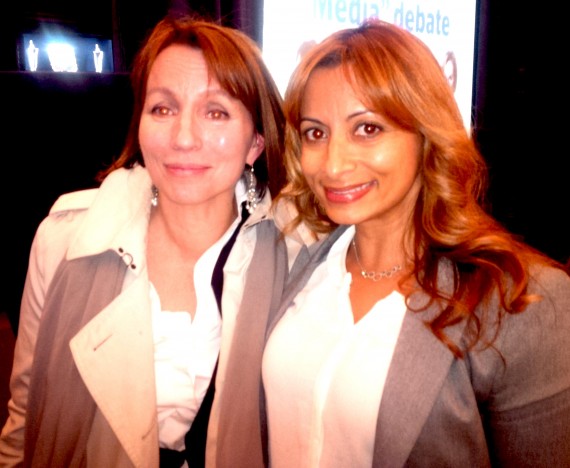 She pointed out that women also have a responsibility to other women in the media.

‘’When we see both sexes portrayed in the media- men are for authority, women are for decoration’’

She had us all laughing incredulously as she pointed out 3 stories in a recent copy of the Daily Mail; one about the youngest woman to lead a FTSE company, one about a female serial killer and the last…wait for it…about Fiona Fullerton not wearing any make up! Sarah added ‘’yes women in nice dresses are great for the front page of a paper and solves front-page ‘pretty girl in a skirt’ problems but is it any good for furthering the female agenda? 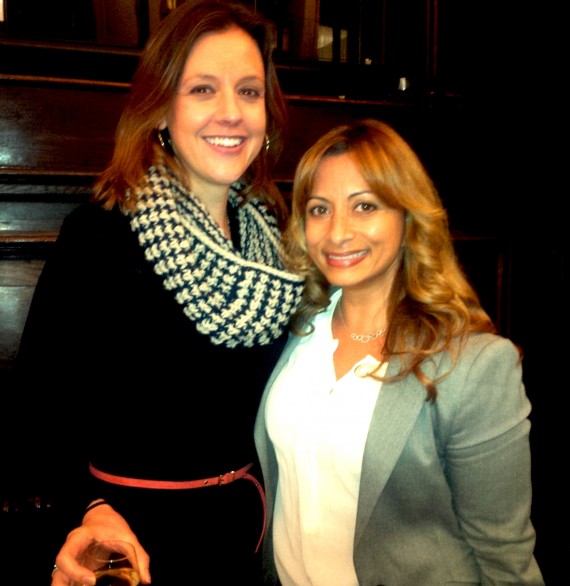 Huffington Post UK Editor-in-Chief Carla Buzasi admitted that she had been lulled into a false sense of security in her early career, when working at numerous female glossy titles like Marie Claire and Cosmo, where there were mainly female bosses and editors. She admitted she was lucky to have continued her ascent, via women empowering her- like her current boss-one of the most famous women in global media-Arianna Huffington. ‘I’ve had lots of big, positive role models’’ she noted.
Carla revealed that a recent survey had shown that in 2012 only 22% of front-page by-lines were by women.

‘‘Just because we see some women at the top doesn’t mean that women are always represented fairly and I feel that responsibility as a female boss, so when we reached out for bloggers at the Huffington post, we championed female bloggers who were often more nervous about being opinionated and judged, by making a conscious effort to ensure we highlighted their bogs on our front pages’’ Carla added as an aside, I am good cos I hire super smart people to my team’’

Carla also revealed her proactive story of how she got her current job whilst she was still at Marie Claire. She had heard that the Huffington Post was going to set up in the UK, and researched and e mailed the boss Arianna, and asked for a meeting. They had a breakfast meeting at Charlotte St Hotel after which Arianna invited Carla to accompany her to a public event where Arianna announced (a surprise to Carla), that Carla was one of her new UK leaders for her brand. proof that not all females are nervous and unconfident at pushing themselves forwards.

. That really summed up the whole debate. Lisa had us all roaring when she recalled her experience at a dinner party where she had been introduced to group of people as editor of the whole newspaper and was repeatedly asked which ‘female area’’ she edited? Was it the fashion pages? Gossip page? Diary? Food? However she did give a nod to the male in her life when revealing that her own husband gave up work for 5 years to look after their young children and you could clearly hear the audible gasp of disbelief in the room as she told us all this. Lisa was still intrigued by the fact that in many industries (like politics), people were aggressively trying to tap into the female agenda, so why in media was there this huge disconnect with the needs of female readers and the feminist cause?

‘’my world in media is unrecognisable now from when I began many years ago. I like to think that I am employed cos I’m a bloody good journalist, and ask the difficult questions, but when I make a mistake the national press jump on me in a way they don’t with my male peers’’ she told us a well known saying; ‘’doctors bury their mistakes, lawyers cover up their mistakes, journalists broadcast theirs!’’

Kay added to the slaying of certain print press titles, as she showed us the Daily Mirror Saturday feature this week, where alongside a picture of legendary singer Debbie Harry the headline was ‘’no doubt she’s dreaming of her youth’’. Females in media are always judged by their looks. This prompted Kay to openly highlight the fact that she herself has had a face lift, because she ‘’wanted to look as good as she could for as long as she could’’ not bacause she was a public face.
Kay also revealed that at her news brand they are making active changes after realising that one in seven of their every one of their interviewees was female. Now that number has changed to one in three after their commitment to changing that statistic, which is much healthier and diverse. (Wonder if that’s why I was on last month?)

For my own selfish needs I would’ve liked to see a female of colour on the panel that was high up in the media world. Someone like Shaminder Nahal who used to edit Newsnight on the BBC and is now a senior editor at Channel 4 News. We do exist-its just we’re not seen.

Our chair Anne McElvoy wrapped the evening up nicely when she said ‘’London is the best place for women in the world, but you’ve got to sell yourself as well as your stories!’’ 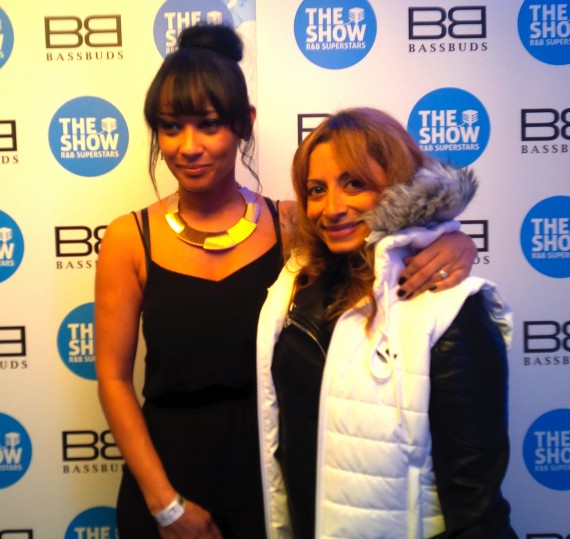 JASMINE WITH LISA MAFFIA AT THE SHOW TOUR.

The last Bassbuds sponsored R&B Superstars show at Wembley Arena was a great, well organised, a list line up of acts that was 6 months ago. Last weekend they threw another show-this time called ‘’The Show Tour’’ with an R&B Superstars line up that once again had the whole arena partying positively and a great evening. 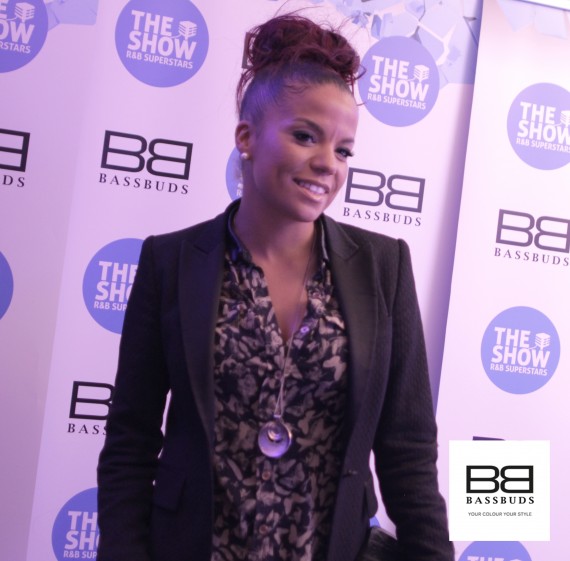 MS DYNAMITE AT THE SHOW TOUR. 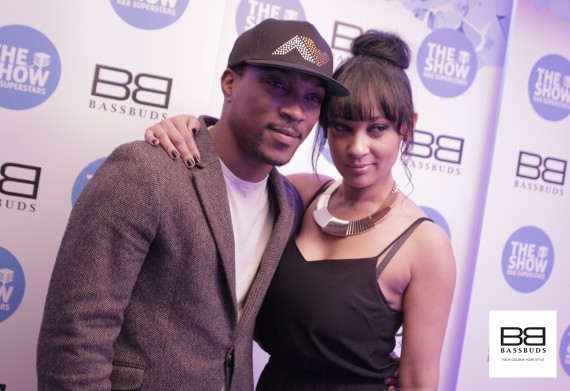 In the main arena the first act I caught was my line up fave- Sisqo- this guy NEVER does a bad show. He’s always got the vocals and dance routines down to a t and is genuinely the male version of Beyonce but ahead of his time. 3 backing dancers-all track suited from head to toe in red, who accompanied him. Their dance routines and energy was dynamic and had the crowd on their feet throughout as the dragon slayed his performance easily. He really does make it all look so easy singing and dancing with 100% given to both art forms. VOICE Editor Dionne Grant and myself were screaming like a pair of teenagers. 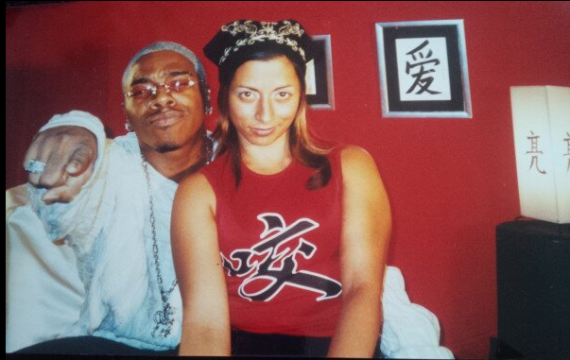 Mario, J Holiday and Dave Hollister all put in good sets but with a minimum of hits between them the energy wasn’t as high as Sisqos levels but their vocals were still very on point. Donell Jones was dressed head to toe in D&G and had the crowd jumping as he sweat hard through his smoother than cocoa butter set. 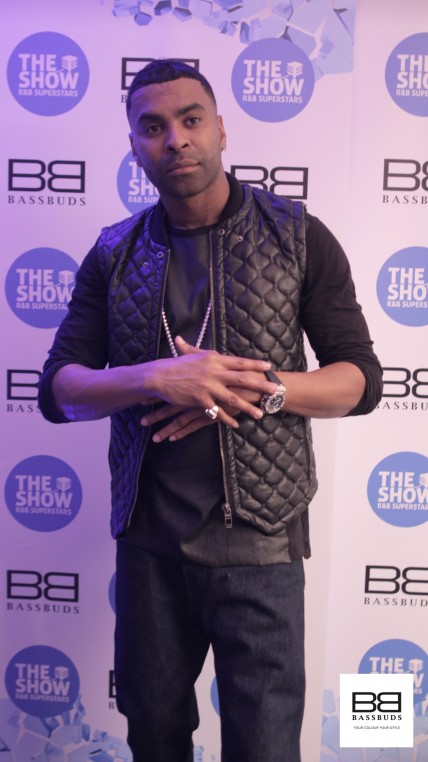 GINUWINE AT THE SHOW TOUR BACKSTAGE.

Ginuwine really did pull out all the stops in his white outfit and had us all dancing non stop too. He –for once- had his shade stunners off so we could see his eyes. He got all old skool by grinding the poor stage and then ran a mini marathon around the arena where he serenaded the audience for all he as worth. 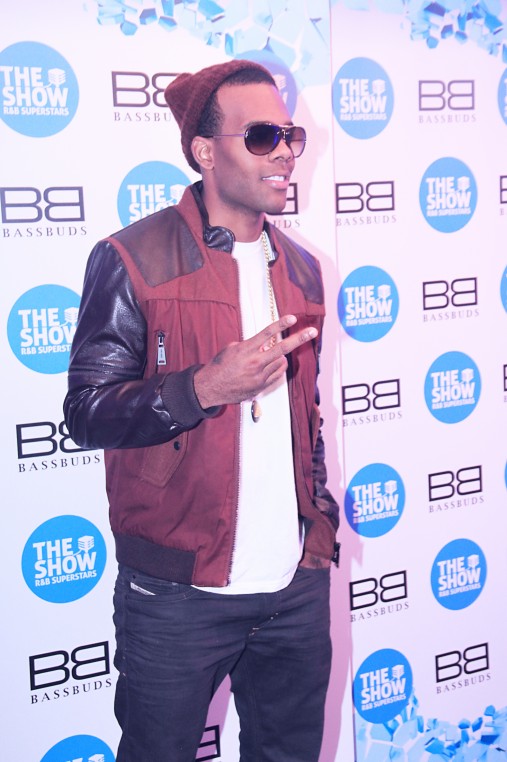 MARIO STRIKES A POSE AT THE SHOW TOUR BACKSTAGE.

Kelly Price (who was once Mariah’s backing singer), had vocals that were as strong as an ox. She took her set to church and back again, before the headliner act of the night- Ms Faith Evans smacked the final goal into the back of the net by crooning through her classic hits for a very souled out audience. Another amazing R&B Superstars line up show that brought back real singers and the genre of R&B to the stage in 2013. It did beg the question though…where are our current R&B stars of today? and are any of them British?? 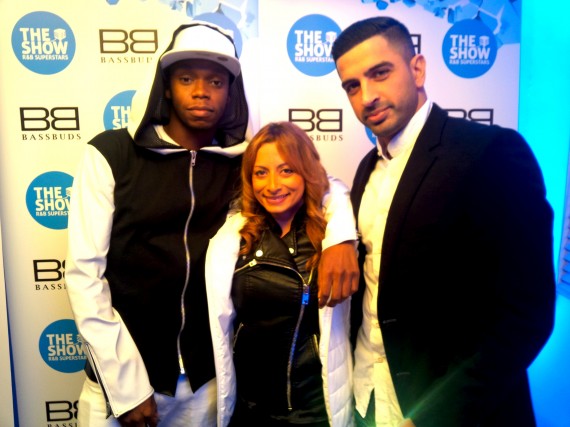 The House of Commons. Home to scandals, broken pledges and petty squabbles between grown men who are out of touch with their community. However, times are changing. Last Friday, the green seats of the House of Commons were not filled with the predominantly white, middle-aged males that we’ve grown accustomed to seeing on television, but instead by a completely different set of people –– the Youth Parliament and my reporter for LONDON360-Iram Sarwar went to check it out.

The Youth Parliament debate, is an initiative run by the British Youth Council with the support of the Government, began in 2009 and has grown substantially in the last five years. The aim of these debates is to choose a campaign that will be the centre point of the UKYP’s manifesto for the next year. Five topics were shortlisted after a public vote in which 478,000 young people from all over the nation took part. These included: ‘Zero tolerance towards bullying in schools’, ‘Combating youth unemployment’, ‘Better work experience and careers advice,’ ‘Votes for 16 and 17 year olds in all public elections ‘‘A curriculum to prepare us for life’ and, last years and this years winning campaign ‘A curriculum to prepare us for life’.
It all looks great on paper, young people getting to debate on what matters to them, young people getting to sit in the House of Commons, young people engaging with politics, but is politics engaging with them? Does anyone (of political significance) actually listen to youth politics? Does it make any difference? As I entered the annual debate,
The Youth Parliament is, as Jamie MacLeod, the Member of Youth Parliament for Scotland (MSYP) says “an opportunity that gives young people a stepping stone to voice their concerns.” While the Youth Parliament might be largely invisible to the majority of the population, they have in just five years managed to engage almost 500,000 young people in politics with the youth elections, managed to get almost 20,000 young people to pledge public support for their campaigns and have received 159 responses from MPs about addressing the views of young people. That’s just in five years. Imagine where they’ll be in ten!

What stood out the most at the debate wad the diversity among the young MPs in age, race and gender? Around 40% of the young politicians were from non-white British backgrounds, contrasting the UK Parliament, which consists of less than 10% of ethnic minorities, and almost half the number of MYPs on the day were female, whereas the real UK Parliament is only 22% female. If this is anything to go by, politics in the UK will have a completely different face.