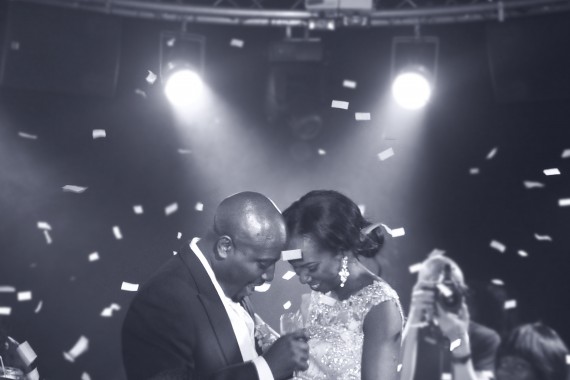 Imagine your perfect wedding day, the venue, location, guests, visuals, entertainment, fun barometer and more. Whatever you imagined, it’s pretty much bound to have been summed up this past fortnight, with the wedding of the year!
The great and the good of London town and Nigeria came out to honour PR maven Vannessa Amadi’s wedding to her best friend, Oki on a beautiful sunny Saturday. 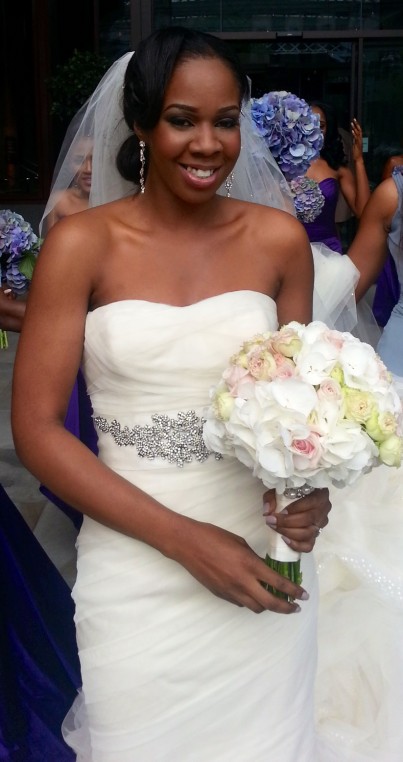 The invitation stated ‘’11am prompt’’ so most of us turned up around 10.30am in order to park in the surrounding 2-hour maximum limit zone, wander up to the most gorgeous intimate church chapel in Hampstead and find a seat. Well imagine my horror, when stylist extraordinaire and fellow guest Vernon Francis whispered to me on the sly ‘’I don’t think Vannessa is turning up until about 12noon’’. Huh? But that would mean if the ceremony and photos lasted longer than an hour we would all get tickets or clamps on our cars! Furthermore the overly impressive church programme running order clearly showed it was a lengthy ceremony. (The programme like the invitation was one of the most impressive I have ever seen for a nuptial. Both were silver grey, very classic and screamed ‘’money!!’’) 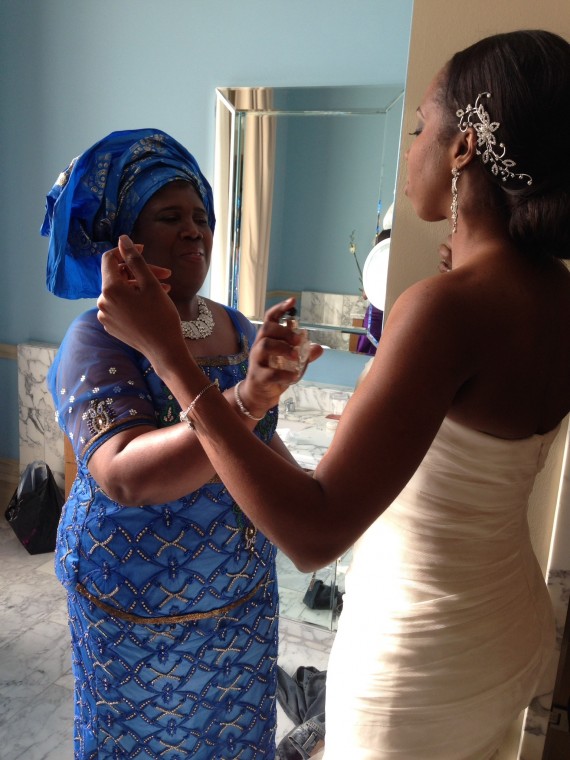 MOTHER OF THE BRIDE GETS HER DAUGHTER READY.

The invite was a hardboard silk covered inscribed and finished off with a blinging clasp. The programme listed the ceremony running order, photos of the happy couple, a personalized service script and even a credit list like the end of a movie! Yes, a credit list naming the main players of the day, bridesmaids, groomsmen, pastor, wedding dress maker- Vera Wang as if you couldn’t guess, and more. 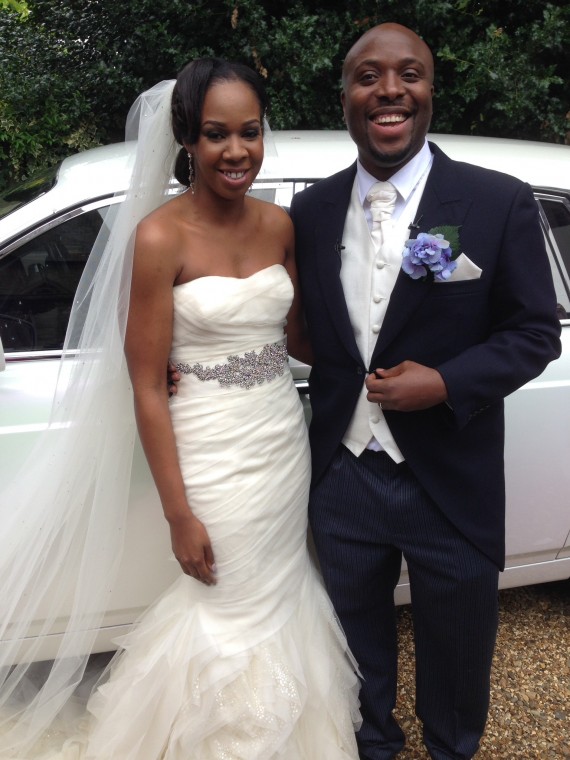 So being an always prepared, extremely resourceful girl scout, I called up my assistant who lives in Hampstead, who popped by speedily with 4 resident parking permits that would save our cars. After slipping on my flats to leg it to our vehicles and back we settled down and gossiped for a whole hour before the brides arrival. Myself and other industry ladies, Jodie Dalmeda, Kanya King, Jessica Huie, Taponeswa Mavunga and Paola Lucktung had to laugh. 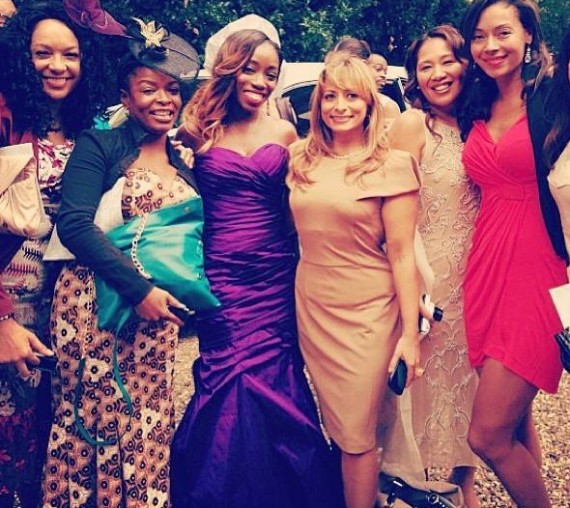 The wedding party arrived at 12.30pm and then the day was well on its way. Vannessa runs her own PR Company so looks after music and showbiz clients who end up becoming tight friends. 2 of these include music stars Estelle and Keisha Buchanan, who were in friend mode for the morning ceremony as bridesmaids. 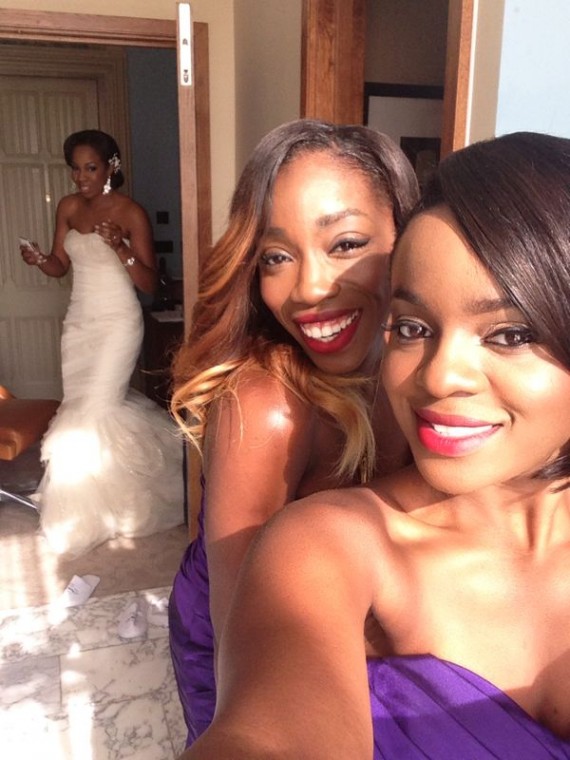 MUSIC STARS ESTELLE AND KEISHA EXCITED TO WALK VANNESSA UP THE AISLE.

Vannessa’s family turned out in their full, beautiful African regalia and the service with its harp quartet, female priest and choir was magical.

The reception was at west London stately home Syon Park in an outdoor marquee. It kicked off with a huge drinks reception where many, many more guests from Vanessa and Oki’s world turned up. Once the guests were seated at over 40 tables, all the African aunties accompanied by drums danced from the rear along the central aisle to the stage area. 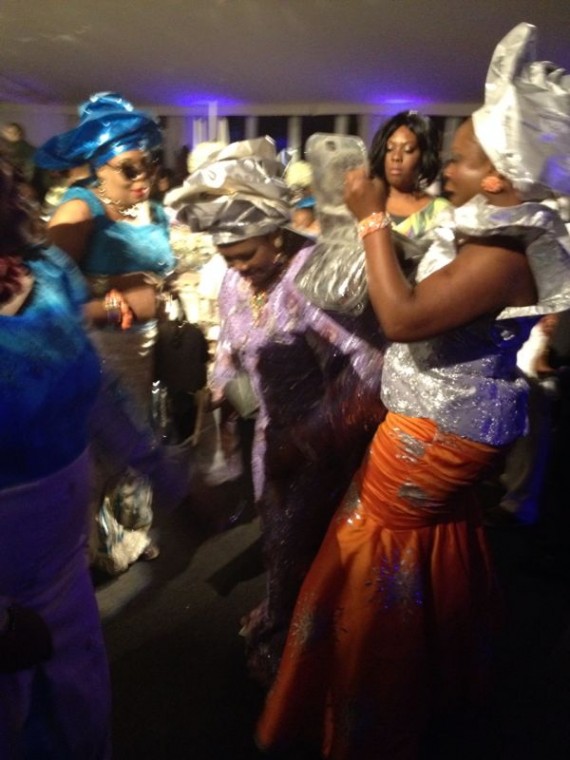 THE AUNTIES DO THEIR THING.

Then the host asked us to be upstanding for the first formal introduction of the new happy couple- MR AND MRS OGBONA. Now THIS was an exceptional moment and my favourite of the day. A white curtain at the rear of the hall parted, to reveal a white film screen adorned with the couples monogrammed logo. Then a spotlight flashed on and popped, at the same time as Robin Thickes ‘Blurred lines’ roared out. The light showed Vannessa and Oki’s silhouettes behind the screen posing in classic wedding poses and dancing before dancing out to us, along the aisle and to their spot at the front of the room onstage. 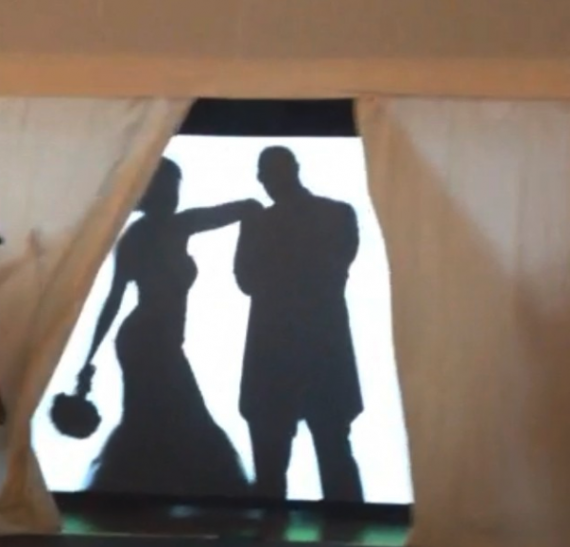 The guests were delirious with surprise and joy and sang and danced along with them. Thereafter followed a lovely schedule of traditional African events like the cracking of the nut and speeches followed by more speeches, before we tucked into a never ending buffet of Caribbean meets African food.
Other highlights of the night included of course, the throwing of the bouquet (I kept well away!), there was also loads of extra fun stuff like a group photo booth, an ice ream cart, a sweetie confectionary table and more. 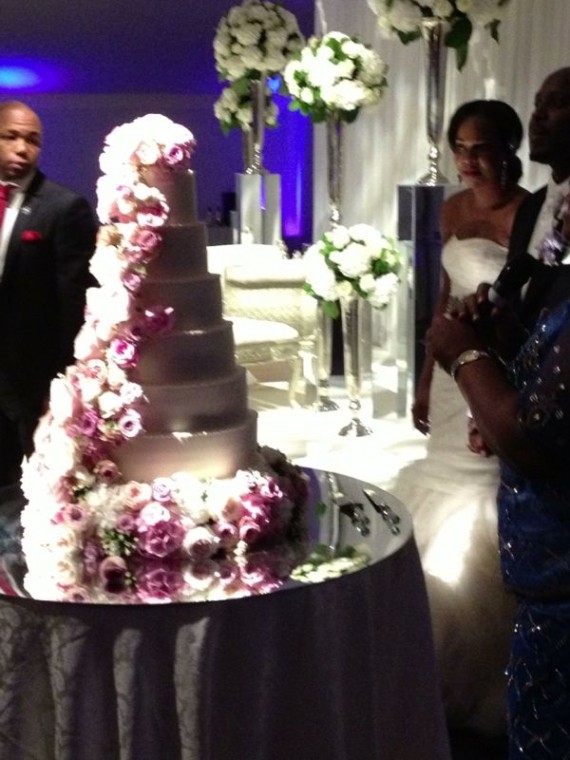 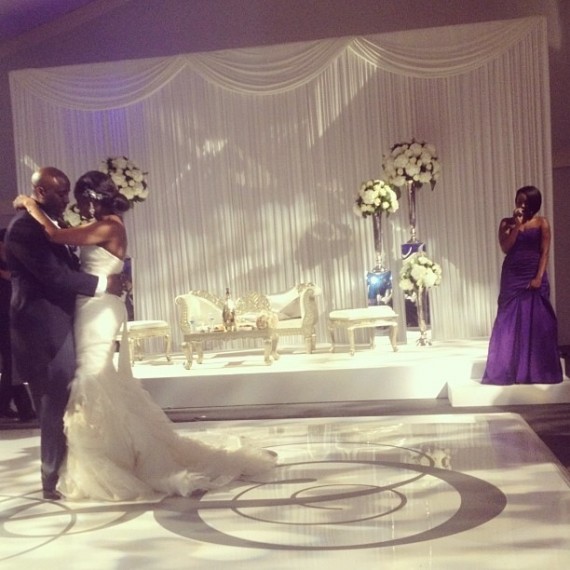 Later we had music chart stars Estelle perform a short set on a raised round platform stage in the party area, followed by D’Banj who led the whole wedding procession around the marquee at one point too! I was embarrassing myself by mostly taking photos of the stylishly chic monogrammed dance floor-the first time I’ve ever wanted to snap floor pics! 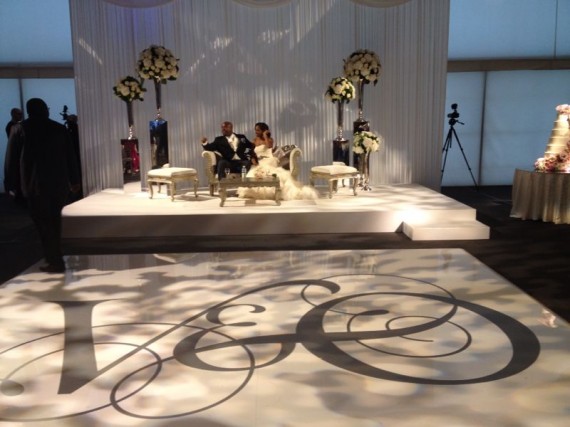 CHECK OUT THE FLOOR! 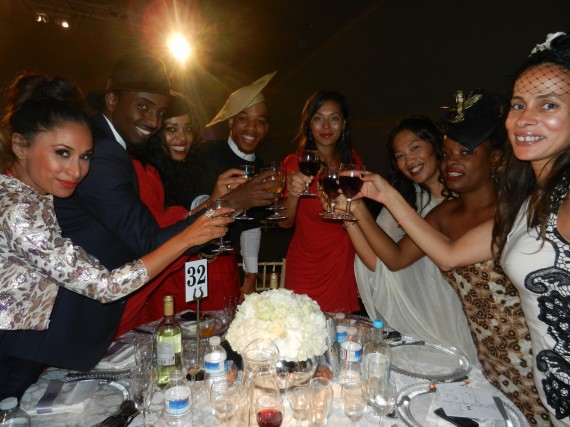 I was sat on table 32, which was obviously the loudest, most glamorous fun table. Joining me at the table was Adidas honcho Paola Lucktung, PR mavens Jodie Dalmeda and Jessica Huie, warner music’s Taponeswa Mavunga, and actress Preeya Kalidas. 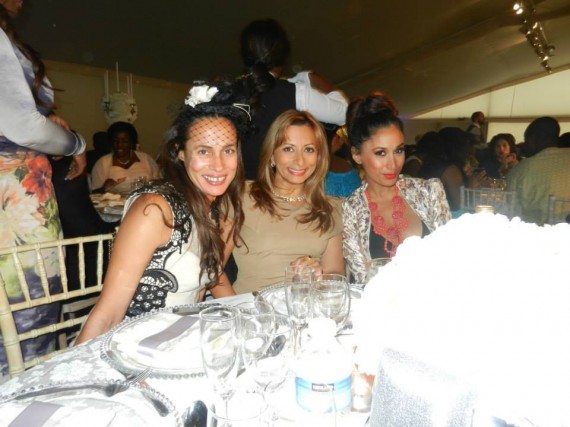 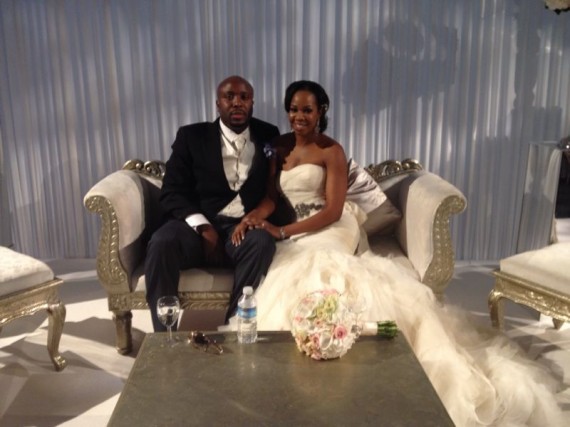 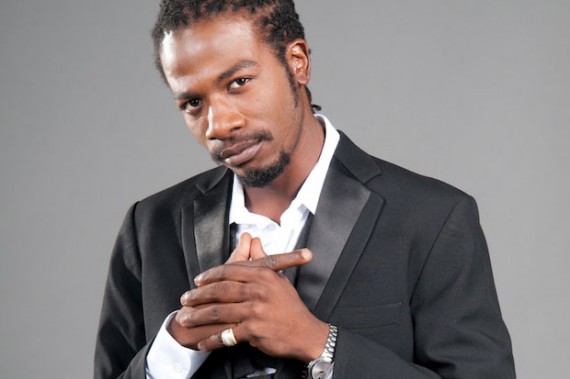 Next I caught up with reggae superstar Gyptian who was in town promoting his latest music and forthcoming live dates.
Like the few standout reggae icons, Gyptian has brought a new flavour to the genre, with his power and vitality to steer reggae in a new direction. Still in his twenties his past hit “Hold You” has been a constant on DJ’s playlists at parties and summer jams repeatedly, and brought a breath of fresh air to the genre.
His albums My Name is Gyptian and I Can Feel Your Pain, have captivated fans globally and his work ethic continues to make inroads into the mainstream. His presence and voice has not faltered. His soothing vocals have carried his bold views from the island of Jamaica to the world. His recent Single- vixen he tells me excitedly is of course about and for the ladies. ‘‘Anything I make for the ladies to enjoy-the man enjoys as a sidebar too!’’ I laughed at the fact that so many acts from the Caribbean always rub their god weather in our faces by showcasing their beaches all the time. He laughed and retorted ‘’riding a horse on a beach-that’s a typical Jamaican date, that’s what we do!’’.
Of course whilst Gyptian was in town the whole ChoiceFM death scenario was being played out. He said it wasn’t anything new and shrugged his shoulders ‘’the white middle class corporations always take over our black brands and make them white and more digestible. Reggae is off most playlists on commercial radio, Why aren’t there more reggae labels? We have David Rodigan in the uk but where are the young reggae djs?’’ I didn’t have the heart to tell him that was our own fault as the radio gatekeepers never developed any young, hot reggae djs.
Gyptian added ‘’the Big always suck out lil ones, the power shifts, we need to see each other more as one, but you cant kill reggae it will go underground, we still perform all over the planet – they cant hold us back for ever!’’
Asked who the top 3 hitters are from the modern reggae scene Gyptian immediately cited ‘’me Gyptian, Shaggy and Sean Paul, numbers don’t lie’’
================== 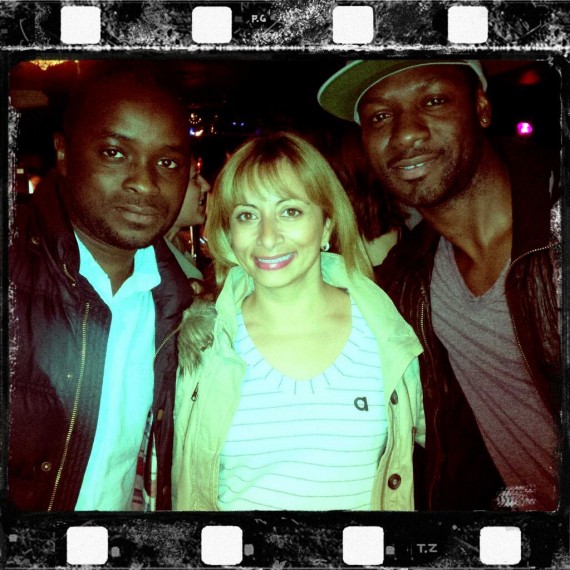 ACTORS FEMI AND RICHARD AT THE HIPHOP SHAKESPEARE JAM.

Finally I went to check out the London date for the latest hip-hop Shakespeare show by Akala’s team. Akala and his brilliantly doubly talented actor rappers performed the story of Richard ll at the Islington O2 Academy. The iambic pentameter of Shakespeare was translated into hip-hop verses and the acting by the whole cast-including main man Bashy who played Richard 11 was amazing.
All the acts including Akala, Bashy, Lady Leshurr & Josh Osho told a compelling story. The Hip-hop Shakespeare Company which was launched by Sir Ian McKellan and fast had Ed Sheeran on board now has legions of fans that rap along to the performance word for word.
Akala told us ”“Richard II is a tale of greed and power, family rivalries and corruption. It is also a story about human beings and what unfettered power does to their souls, it contains some of Shakespeare’s best verses but is not as well known as many of his works. For all these reasons I thought Richard II would be perfect material to inspire The Hip-hop Shakespeare company on our first national tour. We have rewritten the play as a concept album with a full live band, whilst keeping many passages from the original text to move the narrative forward. We can’t wait to share this with more audiences.”
In the house watching this new genre of hip hop performance were music industry bigwigs as well as acting world hot shots like Femi Oyeniran whos own film ‘’Its a lot’’ premiers in Leicester Sq this coming week!