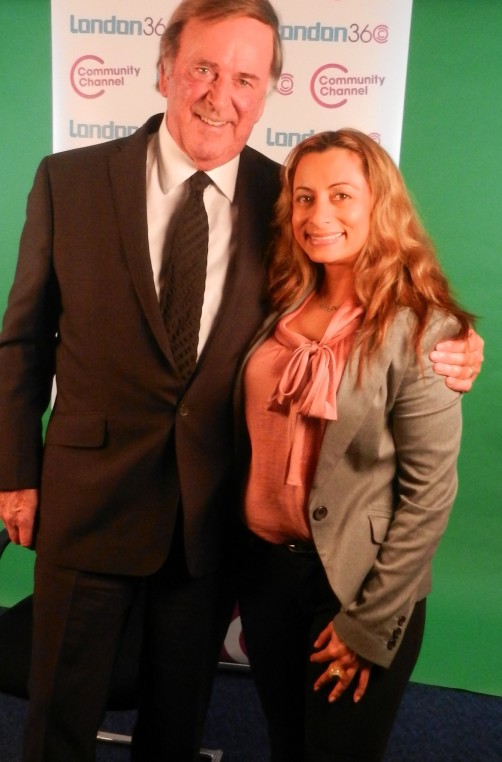 JASMINE WITH BROADCASTING LEGEND SIR TERRY WOGAN!
Many of you know I am the executive editor of a TV and multi media brand called LONDON360. It’s a regular weekly TV show that is on TV on the Community Channel (often segments are also used where appropriate on our corporate partners channels-BBC, ITV, C4, C5 and SKY).
120 young London based reporters between 18-25 make the show from a grass roots level. They speak to Londoners from EVERY walk of life whether a resident, local business owner, MP, councillor, TV star, Music star and more.
The reporters learn to hone their multi media skills and get their feet into doors they wouldn’t usually be able to get in. they make TV, radio for BBC RADIO LONDON’s top show hosted by Eddie Nestor, written weekly print press columns for one of the newspapers in the country-THE VOICE and online 24 hours a day.
Many of the stories covered by the team have led to bigger exposure for Londoners and the success of LONDON360 has now led to a sister show that focus’ on the whole country- predictably called UK360!
Both shows are filmed at the BBC in White City and so far we’ve managed to give a voice to thousands across the country.
Celebrities that have so far been involved in news features include; our ambassadors Alesha Dixon and Noel Clarke, Alicia Keys, BBC host Matt Allwright, Ade Adepitan, George Michael, Chipmunk, Channel 4 News presenter Jon Snow, Nigerian music superstar 2face, Lethal B, Boris Johnson, comedian Kojo, Lisa Maffia, ITV News Presenter Charlene White, Bashy, David Lammy MP, Trevor Nelson, Lord Sebastian Coe, Jay Sean, Celeb chef Marco Pierre White, Akala, Goldie, Rodney P, Sir Steve Redgrave, MC Ty, Glee star Cory Montieth, Levi Roots, Estelle, BAFTA nominee Adam Deacon (vote for him this week-last chance!) and many more.
The most recent UK360 shows are presented by poet laureate Benjamin Zephania and broadcasting legend Terry Wogan.
Both are openly, comfortable opinionated and have very sharp minds. Benjamin has managed to make a career in the written word whilst being dyslexic and Sir Terry is the greatest autocue reader I have ever met-(closely followed by Trevor Nelson LOL!). About his dyslexia Benjamin revealed to London360 reporter Helena Poole ‘’ I’m very dyslexic but I’m also very lucky. I work in the creative arts. I left school at the age of 13 unable to read and write. Its just about reading and writing and that’s an artificial thing to do’’
Then when I learned to read and write I discovered that I was dyslexic.Now I’m a professor at Brunel University. Fortunately, in the creative world you have a lot of understanding people around you. And if I have a problem with words I just invent words and I can get away with it because in my back pocket I have a thing called a Poetic license. But I can understand at school how difficult it can be for some young people struggling with dyslexia.But dyslexic people just look at the world differently. And the most important thing that dyslexic people should know that it is NOT a mark of your intelligence”.

Benjamin could’ve had letters after his name too but famously rejected his OBE from the Queen many years ago. He explained ‘’ It is almost impossible for me to sit here and tell you why I turned down the OBE.At the time I turned it down I wrote a 2000 word article in the Guardian newspaper, and I remember reading the article back and thinking, I could have wrote much more. Basically, I write to connect with people. I don’t write to impress governments, politicians, and Her majesty the Queen and things like that. I write to connect with people. I am Benjamin Zephaniah NO B.E.I don’t want order of the British Empire on my name. I have spent my life fighting against empire. Empire means to my family, slavery, and brutality. Why would I want to celebrate that? Why would I want to put that on to my name?
No, Benjamin Zephaniah NO B.E is me!!’’
We talked to Benjamin about the riots. He was passionate ‘’ Well, it’s too easy to say that people who are uneducated riot.
I was once asked by a very well known TV channel to write a poem about people who riot.
And I thought about it, and I said you know what I’m going to write a poem about people who don’t riot.
(He says Poem)….’’The point is, if you have a job to go to tomorrow and you have a lot to loose why would you be on the street rioting, why would you be doing crime anyway. It’s about hope and if you have nothing to lose then you’ll do anything. Not all people who don’t have a job are uneducated. The media picked up on a couple of people who had jobs that were rioting but there were only a handful of them. Most people were desperate and I’m not saying that taking trainers and stuff like that is making a statement, but there is a political reason why they did that. I know that if I went out and rioted now, or if I stole something from a shop, I will begin to think about what I have to lose. I have my career to lose. What will my fans think of me, what will my parents think of me? What will happen to my students at my university? But if I had nothing to lose, gosh I’m not so sure’’.
Benjamin excitedly remembered me from this column as he stated ‘’I know you-you write that column in THE VOICE with all those stars. I’ve been in the VOICE but usually in the more serious part of the paper. I reassured after this week he would have seen himself in my star area too! LOL. 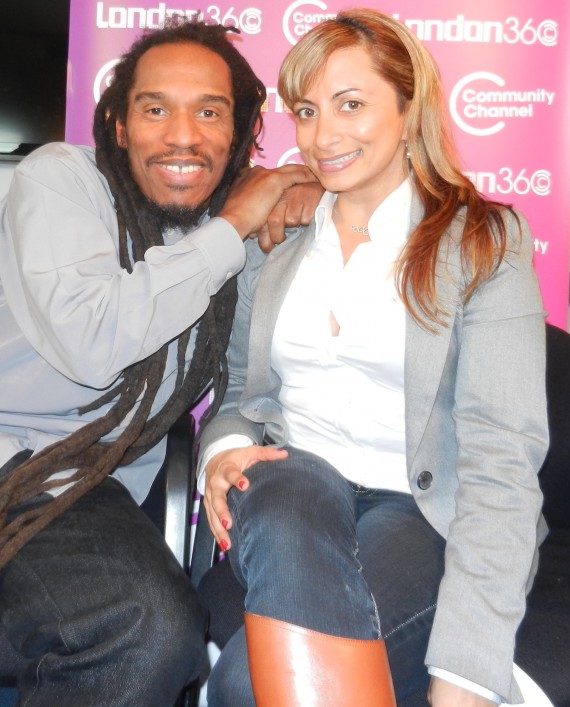 JASMINE WITH POET LAUREATE BENJAMIN ZEPHANIA.
Terry Wogan was charming too. An absolute sweet heart. He has been in the industry years and experience the media from the ground up but is still the humblest of men. He told me ‘’ I always use extra strong braces on TV as the sound battery packs are so heavy they pull my trousers down’’. He also had my reporter Emily Jane brown in stitches as she interviewed him on anything and everything. When asked would he ever consider going into politics? He retorted ‘’It would be the last thing in the world I would ever want to do would be to go into politics, with the possible exception of Boris Johnson, I haven’t really met a politician that I liked’’.
He’s been on TV with his own chat show whilst I was growing up, has a radio show but is currently best known for hosting the BBC’S Children In Need but here is what he revealed he would and wouldn’t do for charity in our CRAZY FOR CHARITY METER. ‘’
‘’A sponsored walk: I can walk, yeah.
Sponsored fancy dress: No
Sponsored silence: I can be silent, but not for very long.
Would you lay in a bath of cold baked beans for an hour: Absolutely…not.
Would you busk for a day in the London tube station: Wild horses would not drag me to the London underground stations to busk
Would you work in a kissing booth: No, you could catch anything
Full body wax from neck to toe: That is probably my idea of hell
Appear in a reality TV show: I have been offered several hundreds of thousands of pounds, under no circumstances in a million years would I go on a reality TV show, or ever be that close to Ant & Dec.
Naked charity calendar: No it might frighten the horses
Climb Everest: If I had my health and strength, I’d give it a go. But I’d probably die at Call 1’’.
Finally we asked why was it important for him to present UK360? he might be getting on a bit but he certainly knows what’s what as he responded enthusiastically ‘’Well I think UK360, it was new to me and I think it’s a relatively new idea as well. But I think it’s the future. I think everything is going to become more and more accessible. And people should be able to use the television to get their message across. This is a fantastic idea and I really do applaud it. Any time you want me to help, I’ll be delighted’’.
Truly a pair of total legends!