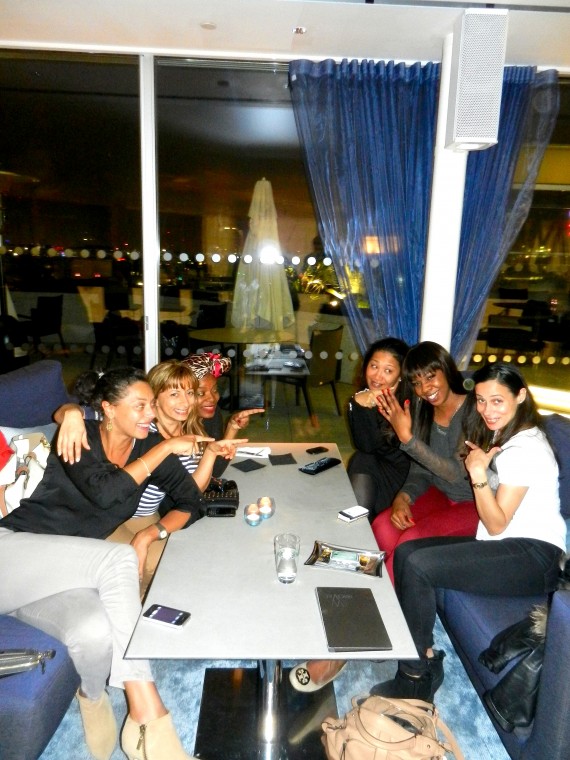 JESSICA, JASMINE, TAPPY, PAOLA, VANESSA, JODIE…ADMIRE THE RING!
Started the week celebrating my dear friend, PR guru Vanessa Amadi’s engagement with a female power players cocktail evening at the ME Hotels rooftop Radio Bar.
Myself and founder of Colourblind Cards Jessica Huie, Warner Music’s Taponeswa Mavunga, Adidas head lady Paola Lucktung and PR lady Jodie Dalmeda, all raised a glass to Vanessa’s impending nuptials with some opulent food and sexy cocktails and look forwards to the Nigerian wedding where I’m told money will be thrown around the bride at some point! 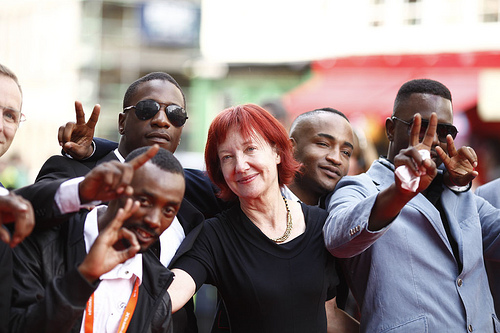 PENNY WOOLCOCK- A GREAT FILM MAKER AND SOCIAL ACTIVIST!
Not many people put their money where their mouth is. I recently met an older, white, film making female director called Penny Woolcock, who’s made a film called ONE MILE AWAY. The intriguing thing about this is that the film is a true documentary about 2 gangs in Birmingham, and their former leaders attempts to call a truce to numerous killings. A dodgy prospect whichever way you look at it.
Penny Woolcock’s inspirational film about the work of a few committed individuals to build a lasting truce between the two rival gangs in Birmingham won the top prize at last year’s Edinburgh Film Festival, when Time Out called it ‘The Most Important British Film of the Year’, its had a bunch more stellar coverage in the Financial Times, The Observer and The Telegraph. The film follows the peace process between two of the biggest gangs in Birmingham, the Burger Bar Boys (B21) and the Johnson Crew (B6), to bring peace to their neighbourhoods. Her past work includes On The Streets (2010) a film about homeless people on the streets of London and 1 Day (2009) , a hip hop musical about a day in the life of an inner city hustler and postcode wars. Last month there were screenings across the UK of the ONE MILE AWAY film as well as a channel 4 premiere of the film.
One Mile Away was initiated by Shabba, a young man affiliated to the Johnson side who met Penny during her research for 1 Day. He saw her as neutral and as someone who had built trust on both sides. Penny agreed to get involved and introduced Shabba to Dylan Duffus – the lead actor in 1 Day and affiliated to the Burger side. The film follows their painstaking journey over two years to recruit more supporters from both sides. Along the way, they get advice from Jonathan Powell, who oversaw the Good Friday Agreement, and the riots erupt in Birmingham, with surprising consequences. The refreshing thing about this film is that it leaves a sustainable legacy for the gang members that took part in making it. The men run their own company with programmes that challenge negative mindsets in young people and support them through the education system. As team they have developed tailored interventions for different age groups. Their programmes target young people most at risk of being caught up in youth crime and dropping out of school:
They’ve called their movement the ‘’Road to Freedom Tour’’ and believe the One Mile Away film can change lives. And that’s why it needs to be seen by as many inner city young people as possible – at home, at school, in prisons – and as many police, judges, politicians and council leaders as we can get it in front of. The #RoadToFreedom Tour started on 15th April (start of the summer school term) and continues on until the autumn. However a tour costs money, and this is where they excelled as business minds. They put their cause on the now infamous kickstarter website –where the public can donate to a project they believe in- and then see it come to life and eventually maybe even get their cash back with a profit. With only hours to go before their time ran out on kickstarter to make the total needed to make the tour happen, the public gave generously and now the tours in full swing across the UK.
I still didn’t understand why an older Caucasian film director would care about making this documentary. Penny explained ‘’I initiated this film with channel 4, I live near Archway and used to see little bunches of flowers on pavements where people were getting shot, so I was shocked and wanted to talk about this more through my work . I find it very frightening that we live in this parallel world, where young people are killing each other, we’re all connected, there are people spending a fortune sending your kids to private school but they have to come back out to this real world’’

For Penny there is also a personal connection. ‘’After being mugged I didn’t want to be a frightened person, I wanted to see what made these young people behave like this and see if we could give a voice to their experience’’

The film developed into something more than just a film, because of a young former gang member called Simeon Moore who played Zimbo in the film. He was born in Birmingham and lives in Aston with his two kids. He first met Penny 5 years ago but only got involved in One Mile Away after seeing 1 Day. He is a big believer in a change of mentality. Zimbo believes that gangs are merely a symptom of a bigger problem and that rather than merely treating the symptom, which has been attempted many times before, we should tackle the bigger issue of mental well being. He believes unhealthy minds are one of the biggest problems facing young people of disadvantaged areas today. Zimbo is keen to see changes on the streets and in his community.
Zimbo tells me ‘’ my 1st impressions of Penny in 2005, were when she was making her past film 1 day, I was wary, thought she was police, I drove her assistant around the endz, but then I stepped away and thought best not to take a risk. A year later 1 day came out, and I realized she was real, so we built a relationship. The films opened doors for me, I’ve changed from a full time gang banger to running a company. I don’t watch TV as much, I read more, I research, I wasn’t that way inclined before’’
I was going in a good way anyway but I owe the opportunity to Penny, my mind was ready for her to come into my life. I am more musically inclined, not an actor, they were trying to get me involved in a long while, I’d always fob them off all the time, but I turned up one day, and told them what I thought. I said If you are going to focus on the real issues I will ride for that cause’’
Penny recalls ‘’Zimbo told me ‘’if you stop the gang violence everything else remains the same, drugs, violence -we have to address the mentality’’. So the actors were given business mentoring by Britdoc to use the film as a resource for social change. They wrote school programmes. Now its more of a movement, its Bengali kids in Tower Hamlets, white kids in Wolverhampton, its all youth’’

Zimbo added ‘’ With our tour we are getting a movement going with empowering gangs across the UK, all the youths want is to make money-they worship it, I’m trying to show them a better way of getting there. We are making it uncool to do negative things, we’re making it laughable to be criminal’. When I was rapping I was talking about the same thing I am now-some people call it snitching. I’m fighting against it, my last time in prison I’d had enough, I was on a 5 week trial, got found not guilty, I felt like a useless father, I’d been reading books, it all played a part’’. ‘’The secret’’ was the 1st book on my journey-I’m the controller of my own reality’’.
Zimbo debates the role of music in gang culture with me ‘‘the art of music is often hypocritical. The people making millions from it are not living that lifestyle. Rick Ross was a prison officer. I’m trying to make it difficult for UK rappers to rap about bullshit and negativity. I look at all these kids as my own. What we need to do is work from the top down. People in the mainstream like Rick Ross selling drugs, that makes the mainstream?’’
Penny told me that when she’’ first began doing research for 1 day, people thought I was working for the police. ‘‘But when I met Shabba. He trusted me. We’ve had a lot of trouble with the police, they went to every cinema in Wolverhampton, Dudley, Birmingham, and warned the cinema management ‘ there will be trouble if u show this film and so on. Even before the channel 4 screening the police harassed us on the day by insisting we add their logo to the TV screening to make it look as if we worked with them, thereby putting the young actors/ former gang members lives at risk’’

Zimbo nods ‘’ there’s a problem with the police, police trying to take c4 to court cos they weren’t shown in a good light in our documentary, they gave us a hard time throughout the process, so when we try to do something positive the police give you a lot of pressure. They’re trying to put their logo on the C4 film to try and get me killed. For the past 2 days penny’s been stressed right out-it makes it look like we’re working with the police-this could easily escalate things and incite violence, but they wont stop me-I’m a warrior’’
Zimbo praises Penny but questions the governments attempts at building peace on the streets ‘’it’s ironic that its taken a 63 year old white woman to bring some peace to our streets, she’s got nothing lucrative out of it-its really important that she was around, a lot of elder black people in our community haven’t stopped it in the past, but they are making money from it’’. 380million is spent on gang initiatives in UK. That’s a lot of cash, police have their own gang units-there are jobs in this, people, social services, job centres are making money out of it-why would they want it to stop-its not in their best interests, they start on the right path but once the ball stars rolling they lose perspective-it could have been dead years ago so I do feel resentful-I don’t know 1 active gang member that’s been helped by this money-where has it all gone? ’’
So Penny has made friends with gangsters, received death threats and fought a court case against the police (which she won) for this film and the youth of Birmingham but still isn’t deterred by the drama.
“I will be involved with the One Mile Away people for the rest of my life. It sounds cheesy but it is about love, in a way. I really believe in them and what they are trying to do.”