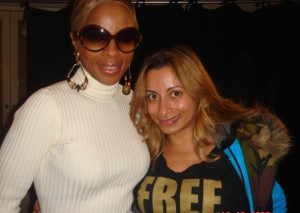 Wow it’s a month until Christmas and I really need to get it together! I’ve only bought 3 gifts so far and they’re silly stocking fillers for my godson, Nick Cannon and my mum!

Aside from that its been about reflecting on lovely things in life like being happy for my girl Mariah and her hubby Nick on their impending new spring arrival, attending friends wedding vow renewals, girly cook-offs and slumber parties, sleep overs and watching my cousin from Orange County, LA play international tennis at the 02! (The Dotiwala genes- they run globally!). Its any wonder that I’ve managed to get any work done.

The week began with a run of real hip hop shows in London by Redman, Methodman, KRS-1 and Public Enemy and even though you already know I respect the new skool of young music acts immensely, having been reminded of the old skool talent, lyrical skills and articulation I have to say……old skool really does out shine the new skool acts. The level of articulation, subject matter and stage presence can’t be touched. Young uns-You can’t know and respect hip-hop and R&B music now if you don’t know about the past history. Some acts actually don’t know who the Isley Brothers or Mobb Deep are and they think So Solid Crew are old skool LOL.

It was a full American run as the queen of hip-hop soul Mary J Blige then arrived for her UK dates too. I’ve seen her perform from the early days (since that legendary gig where the London crowd booed her offstage) and this time around her personal fitness trainer Mark Jenkins called and asked me if I wanted a work out. Every time Mark’s in town he reaches out and we have an army boot camp-like training session in Hyde Park where I try not to throw up after he’s put me through my paces. You can see he’s in Mary’s life when you watch her onstage. Her body is ripped and when she moves her grace and strength is apparent for all to see. There were so many hits! The 02 Arena was packed from top to bottom, Jay Z and Beyonce were in the house and Mary was belting out hit after hit and running the show like a ragga dance. Verse, chorus, NEXT!. I spend a lot of time in the gym myself and consider myself fitter than most but Mark has me doing sessions that take me right out of my comfort zone and freak out all my comfort senses. He had me doing special awareness exercises with hoops, medicine balls, and an array of equipment I’ve never seen before in my life! Mark explained that when his acts like P Diddy, D’Angelo and Mary are onstage they need to focus on the audience and their music and so special awareness and stamina are paramount which is why we never see Mary looking hesitant or meek as she struts her stuff nightly to packed stadiums. Mark credits Mary for his marriage and kids. He met his wife when he first began working on Mary’s tour over a decade ago after he’s spilt up with his then girl friend. He stood stage side one night and got really sad thinking about her as Mary sang one of her classic love ballads. Apparently Mark was looking woeful when his wife to be walked by asking ‘’what’s wrong?’’. Mark apparently said ‘’I’ve just split up with my girl, all I want to do is get laid, and Mary keeps singing these love songs depressing the hell out of me!’’. Clearly his wife to be scarpered after calling him a pig. 3 weeks later they got together and married in Vegas. Mary kept her eye on the couple and couldn’t be happier for Mark that its lasted long term. For that Mark stated he was forever indebted to his boss-the Queen of hip hop soul. 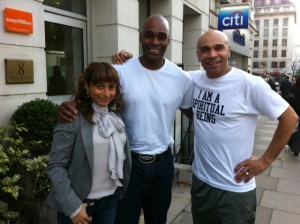 JASMINE WITH MARK JENKINS AND GOLDIE.

The next day after singing ourselves hoarse at the show alongside Mary’s dulcet tones, I invited Mark to lunch with myself and drum&bass legend Goldie. Goldie was just out of Strictly Come Dancing and back on his daily early morning bikram regime. We hadn’t caught up since he got married last Christmas and so we met at a great Japanese spot where Goldie ordered 2 massive beef lunches, another for me, and Mark had a salad LOL. I have known Goldie for 20 years after he used to date a girl fiend of mine. My earliest memory of him is from a flat in Shepherds Bush where he made us all dinner and burnt the rice! Back then he was an out of control, crazy, wild, creative type. With his roots in graffiti art, break dancing, making music and much much more he used to bounce across from the states and back to the UK and eventually channelled his talents and became known as nineties drum  & bass king Goldie which led to worldwide tours and even a role in a James Bond movie!  These days his energy is more spiritual, he’s a father and husband and juggles TV shows, live music events and his art is exhibited at art galleries. That’s what you call getting back on the straight and narrow and turning your life around positively. Currently he’s working on a BBC TV show with the royal family and his new mate Prince Harry!

So it’s true what they say about life- you’re always connected to everyone else on the globe via the six degrees of separation theory- where everyone is connected to anyone else via 6 steps. So I guess I could state that I am linked to a Royal. Step back and curtsey as I make my grand entrance at Will and Kate’s impending nuptials!!