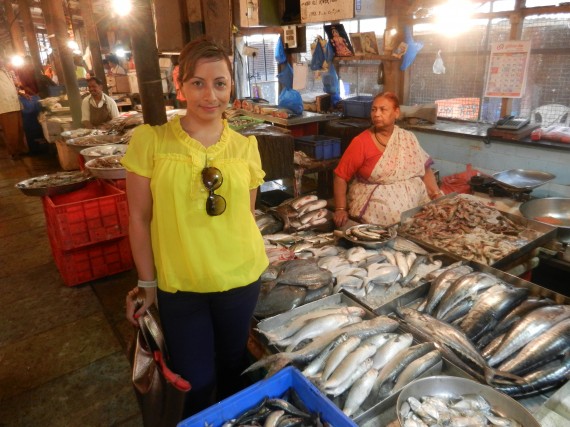 JASMINE WITNESSES FISH DRAGGED STRAIGHT OUT OF THE OCEAN IN THE FISH MARKET IN INDIA.
This week I forked out £30 quid for a horrific 70’s outfit from a fancy dress store for a 70’s themed birthday party, attended Hackney Empire again for the comedy show Strictly Come Laughing, had a romantic dinner at the ROOF GDNS restaurant Babylon, took the London360 news reporters to SKY TV for a meet and greet session , had our regular MTV NEWS reunion, grabbed a quick cup of tea with rapper/activist JAJA 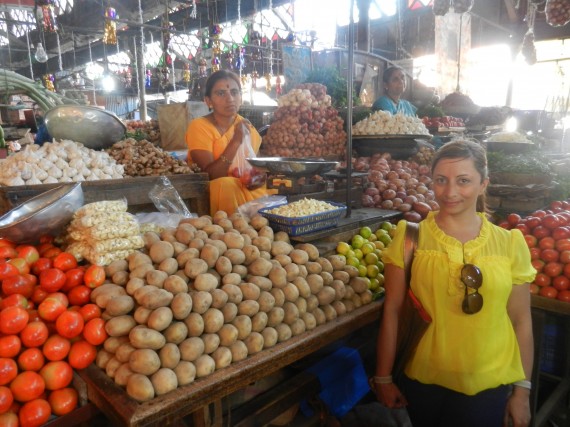 JASMINE BUYS SOME FRESH FRUIT AND VEG AT THE INDIAN MARKET-SMELLS AMAZING!
I also took my mum to India for 10 days for her birthday treat. It was crazy! I love countries where everything is alien to us. When exiting the airport in Mumbai every sense is assaulted simultaneously. The heat is like walking into an oven. The unrelenting noise and sound of the people and cars honking is a shock. The sheer volume of people, cars, motorbikes, colourful clothing, animals and extraordinary buildings is mesmerising. The smells of exotic flowers, spicy cooking, piles of sewage and religious incense are suffocating. It’s a real holiday in that so much is different to what is ‘normal’ to me here in the UK! I travel a lot and many American, European and African cities all resemble each other, but it’s really in parts of Asia that I truly feel I am experiencing something new.
So it was a little disappointing to discover that the capital of Bollywood-Mumbai- is vastly becoming the same city as everywhere else! I’ve been before, but this visit showed how fast the country is developing. I loved it more when it was quite un influenced by western corporate brands, but now there are name brands everywhere. Body shop, costa, Starbucks, KFC, McDonalds, Pizza Hut and many more. I was stunned! 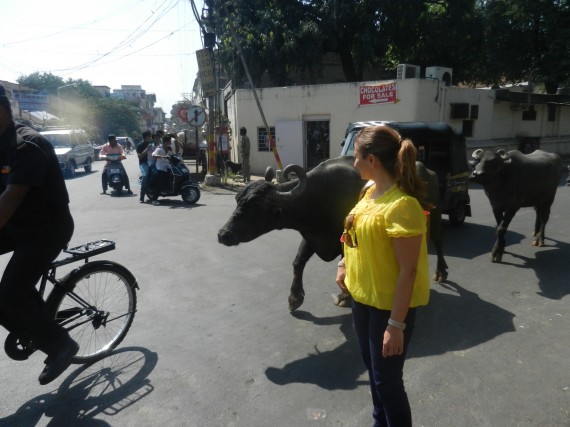 JASMINE OBSERVES INDIA’S VARIETY OF ROAD USERS IN PUNE!
On previous trips I’ve been used to seeing herds of ox, cattle, bull etc walking by in the roads. I’ve seen traffic stopped by the occasional elephant that’s decided to plonk itself in the middle of the road and all the traffic and people continue on around it without batting an eyelid. There was nothing quite that wondrous this time around-just the odd 4 legged straggler. Oh, aside from the fact that tailors out there charged 200 rupees to make a copy of any dress/blouse/piece of clothing I liked. That’s just over £2 what with 85 rupees making up a pound. 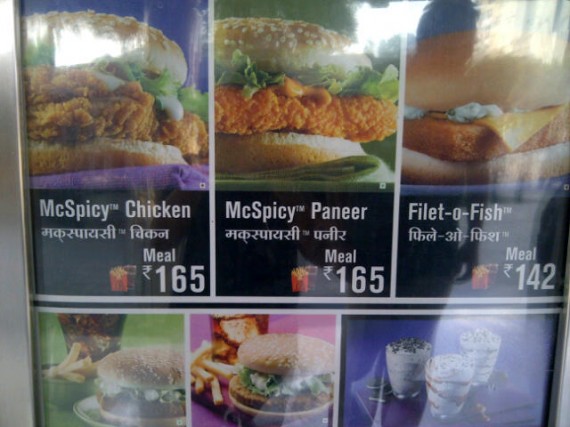 MCDONALDS LOCAL VERSIONS!
Then I popped to their McDonalds (which amusingly had a maharaja mac and MCspicy Paneer , MCspicy chicken as staple favourites), to find a fillet-o-fish cost more than the tailor charged to make a bespoke piece of clothing! Shocking! No wonder Primark prices are so cheap?! Surely India needs a better chart of fair pay? 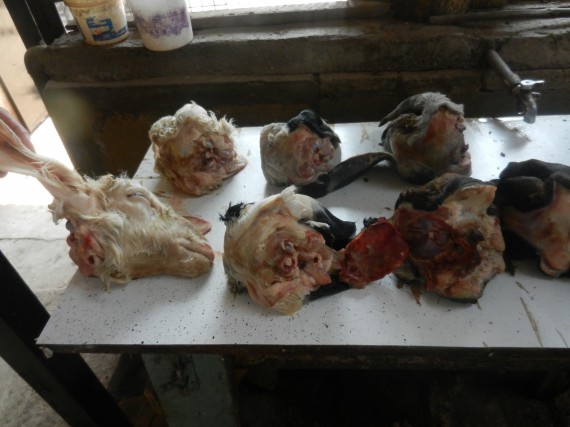 ANYONE FANCY A GOATS HEAD FOR DINNER?
I did also travel to Pune. Originally known as Poona- where yoga enthusiasts from around the globe flock to retreats and schools. This was more rural feeling with its quaint old meat, fish, vegetable and fruit markets. I tried not to be a horrified, carnivore as I observed goats have their necks sliced open and huge piles of intestines pile up on the side. 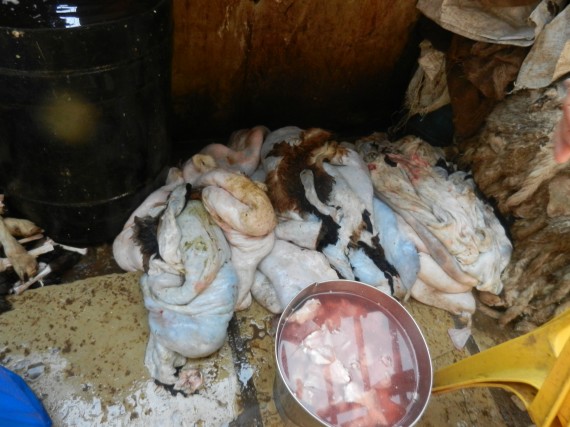 A PILE OF INTESTINES WITH GOAT SKINS ALONGSIDE-NICE! 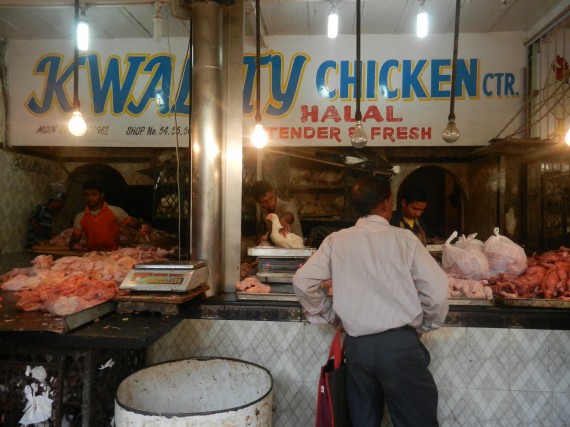 ANOTHER LIVE CHICKEN LOOKS CONCERNED AS ITS WEIGHED JUST BEFORE SLAUGHTER ”BUT I PROVIDED ALL THOSE EGGS FOR YOU…!”
I watched the sad looking chickens get weighed on a scale and have their necks wrung as they were picked to be a korma that night. I watched fishermen haul fresh, giant, still flapping fish into the fish market, I smelt amazing smells as I went shopping for fresh salad ingredients- their vast array of big, tasty fruit and veg tasted a lot better than ours. 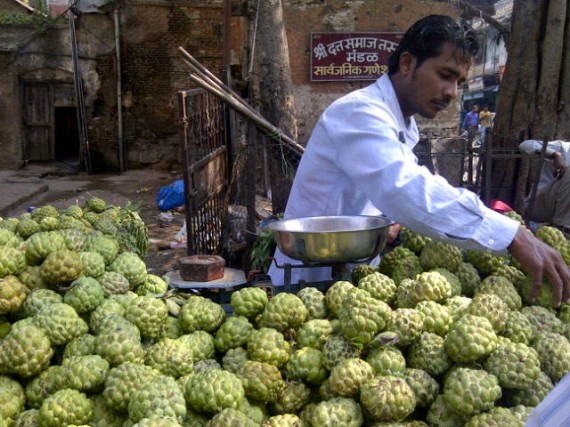 CUSTARD APPLES! LOADS OF THEM! YUM!
My favourite fruit is a sitphal-known in the western world as a custard apple. Its green scaly crocodile skin and fleshy, juicy white fruit inside fascinate me! I’m also partial to a bright pink guava pear! 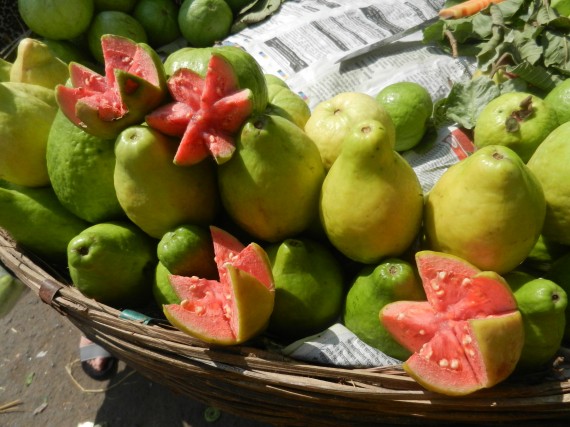 BRIGHT PINK DELICIOUS GUAVA PEARS!
We were there during the week of Diwali so regular sounds of bombs going off (I was reassured they were fireworks!), and festivity filled the air. Giant mountains of bright orange marigold flowers were dumped on the roadsides as workers sewed them together into garlands ready to adorn doorways, statues and people. 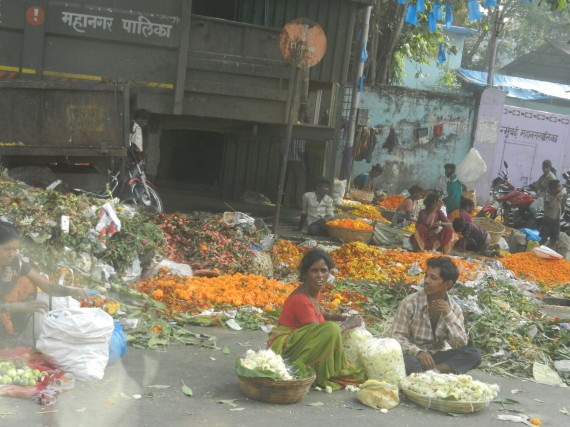 MARIGOLD FLOWERS PILE UP IN ANTICIPATION OF DIWALI 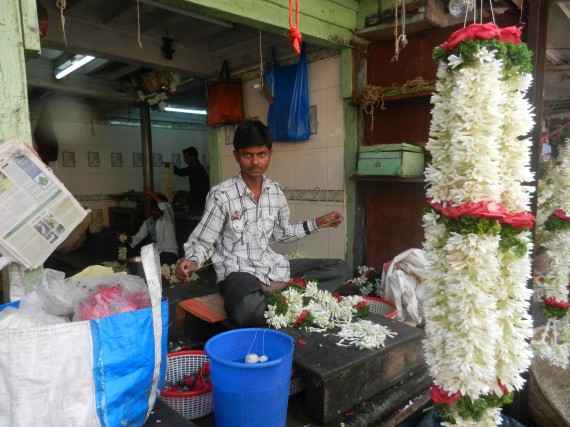 A FLOWER SELLER PAINSTAKINGLY SEWS FLOWERS TOGETHER TO MAKE DIWALI GARLANDS!
Whilst I was out there the Duchess of Cornwall – Camilla was also out there on a yoga retreat so the locals were all agog with Royal hype!
Also whilst out there Naomi Campbell threw a 50th birthday bash for her boyfriend Vladimir Doronin’s with no expense spared! The guests were flown in via 12 private jets and included Kate Moss, Demi Moore, Bob Geldof, Sarah Ferguson and Eva Herzigova. Diva Diana Ross performed for half a million and the only downer was the Mumbai based party planner being arrested for excessive noise as the fort where one of the 2 parties was held.
Recently loads of music stars have been out there to perform. They include J Lo and Akon and upcoming performers include Lady Gaga and David Guetta so it seems that celebrities are most definitely aware that India is a huge untapped gold mine that’s got mucho spending power!

On my return I was home straight off the plane and into the studio to film the LADIES TALK TV show for SKY 218. Straight after that it was off to the annual CDN Awards at the Hackney Empire, which this year saw us, win an award! Yeay! We were thrilled that Media Trust’s Breaking into News initiative enabled ITN and ITV News to win a prestigious Creative Diversity Network award, giving us great recognition (and positive praise from ITN/ITV) among a huge audience of media great & good, including Tim Davie (Acting BBC DG), our own trustee Sophie Turner Laing, and a few hundred others. BBC Acting Director General Tim Davie hosted the awards alongside Amanda Rice -Head of BBC Diversity. Davie praised the work of the broadcasters for their behind the scenes initiatives like the Hackney Weekend (Radio1) project and indie company Shine’s ‘The Hatch’ project which aims to give young marginalised people the opportunity to work on media production. Entertainment was provided by Shappi Khorsandi and Stephen K Amos. “I’ve been coming to similar events for years but this year it really feels like we’re winning on diversity,” said Channel 4 presenter Krishnan Guru Murthy presenter of the Factual Award. Best Diversity Initiative was won by- BBC Vision Intake Pool. Best Nations & Regions Programme WINNER was Making Bradford British (Love Productions for Channel 4). Coronation Street won the Radio Times Soap Award – voted for by the public. Best Factual Programme presented by Krishnan Guru Murthy was won by- Letting Go (October Films for BBC One) , and finally the 2012 Award for Outstanding Achievement presented by Tim Davie went to Channel 4’s Paralympics coverage which was more than well deserved!
It was a great evening full of positivity- even Lenny Henry’s presence didn’t irritate me as much as usual!. CDN Awards Creative Lead and BBC Diversity Manager, Chantal Badjie said: “we wanted this year’s awards to feel celebratory, entertaining and yet give a serious message. Based on the feedback from the audience and our partners across the CDN, it looks like we achieved that”

Finally hats off to the organisers of Strictly Come Laughing 4 at the Hackney Empire. This fantastic event showed the big-hearted side of comedy as all performers donated their time free of charge to raise money for the impoverished town of Kwahu Tafo in Ghana.
The sold out show was hosted by BBC London’s top broadcaster Eddie Nestor with film and TV star Robbie Gee and kicked off to a brilliant start by the up and coming and very funny Axel.
He was followed by a very risqué but funny set by Rudy Lickwood who suggested that one way to ensure young children were in their houses by 8pm would be to ‘’release all paedophiles onto the streets at this time!’’. Other comedians included one of my personal and crowd favourites Slim (who tells me he is planning another one man show sometime in 2013) Eddie Kadi and Kevin J who had the crowd in stitches with a short preview of their forthcoming show Ed’n’Kev, Stephen K Amos, Glenda Jaxson who had the men squirming with her stories about boring sex, Quincy, Mr Cee and the always funny, Tony Hendrix.

Remember the name, Jermaine Jackman, the 17-year-old Hackney singer (fresh from performing at the Apollo theatre in Harlem) received the nights only standing ovation and is set for big things.
We were also blessed with a heart-thumping, toe tapping treat from the cast members of award winning West End musical Stomp.
There was also a plethora of Celebrities doing their bit on the night including Britain’s answer to Denzel Washington the gorgeous Hugh Quarshie, also from Holby City Jimmy Akingbola who plays Malick and Chizzy Akudolu who plays Mo, star of Babyfather and Waking The Dead and about to become the 1st Black full time cast member of Emmerdale Wil Johnson and from EastEnders, Teachers, Casualty and so much more the gorgeous Ellen Thomas.

A great night full of belly laughs and we could all feel good about ourselves knowing every penny was going directly to help build a better life for the people of Kwahu Tafo Roll on Strictly 5(to find out more about where the money goes or to make donations www.friendsoftafo.org). Over £11,000 was raised on Sunday for Kwahu Tafo! now that’s people powered change!