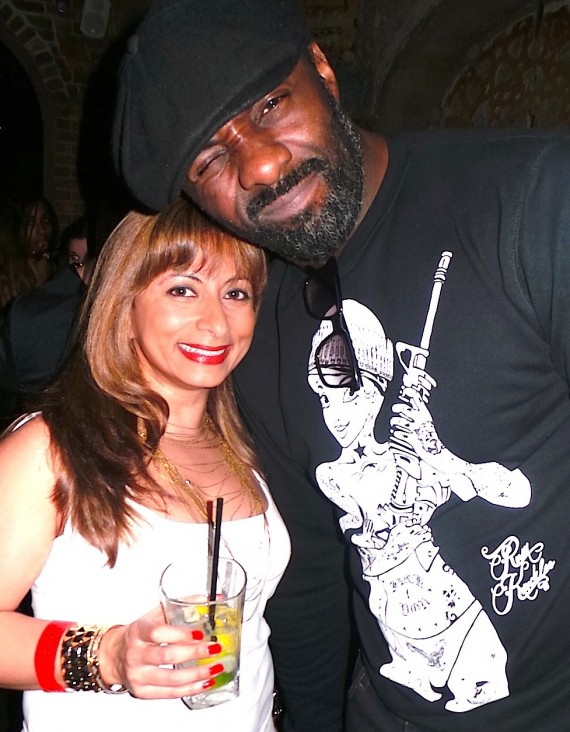 JASMINE WITH OLD FRIEND IDRIS ELBA AT LOVE & LIQUOR
March really is a month for fun. It’s as if all the end of year cobwebs and early new year depression have finally cleared, the daffodils are blossoming and the fabulous soirees are back in full effect!
This week alone has been like a chapter out of Craig David’s diary .The week began on the Friday- (THE VOICE week always begins Friday as we go to print every Thursday! Fridays the new Monday lol)

On Friday I dragged some friends down to West London’s Kilburn High Street where THE WIRE and Luther star, actor Idris Elba has a DJ residency for a few weeks. The club is called Love & Liquor and really is as good if not better than most West End clubs. Its bars are cool and sexy with a very New York vibe. Its DJ and VIP booths are aptly designed and look out onto an always-heaving dance floor. The drinks aren’t unreasonably priced and even better, whilst their door is busy and not easy to get in, they don’t seem to have issues with folk of darker melanin pigmentation and so the crowd mix is hugely diverse and sexy. Guests were dressed smart casual and trendy and the vibe was welcoming and all were dancing without the hostile over whelming vibe of drugs and sleaze that you feel at many West End clubs with their oppressive security these days. Even better, actor Idris was joined on the decks for one night only by my mate DJ Trevor Nelson who I had gone to the club with (thanks Trev). Between them both they threw down a wide selection of classic old skool bangers both big and niche that had the crowd jumping up and down all night. The VIP was heaving with ladies trying to catch Idris eye but as ever he was the consummate professional and kept it moving. I have known Dris since he was a raver back in the day standing in the corner of parties nodding his head passionately engrossed in the music. I’m embarrassed to say that a few years ago at a Jazz Café event when he came over to say hello, his cap was pulled so far over his head that I smiled, nodded and moved on quickly not recognising him. Weeks later he was a superstar. Anytime he’s met me during my days at MTV the men I worked alongside have been just as excited about his presence as the women!
The most fascinating thing about him really is that he remains as humble as he’s always been. On Friday at the club I could see that on the other side of the VIP he was chatting to people so I didn’t want to interrupt him (however well you know artists there’s always a teeny tiny part of you that thinks they might not remember you –silly but true!). I stayed put and was chatting to my mates when he came over and interrupted us and to say hi to me and we caught up. Many artists have way too much pride to do that. Just shows how absolutely real this man is. You can take the boy out of hackney but you can’t take the hackney realness outta him.
He laughed humbly when I congratulated him on his continued career success and sex symbol status pointing to his beard saying ‘’I don’t know about that Jas-look at my white speckles of hair in my beard –I’m getting old’’
Asking about his side line music career and passion he revealed ‘’I have to focus on the main job of the screen stuff and dabble in my music where and when I can’’
Meanwhile Trevor was very merry. In fact more merry than I’ve seen him in a long time. He was DJ’ing, dancing up a storm in the VIP, trying to remain professional as Jamaican girls were winding up on him in a very sexual manner- go uncle Trev! LOL!
Photographer to the stars Paul H was present, and for once not working so it was great to see him relaxing and not snappy snapping away with his camera. BBC marketing exec Jay Davidson (works with Idris on Luther) was wilding out too. Great to see her having fun! International PR maven Rozan Ahmed (United Nations) was working the room with the artist manager-the lovely Chanelle Newman. 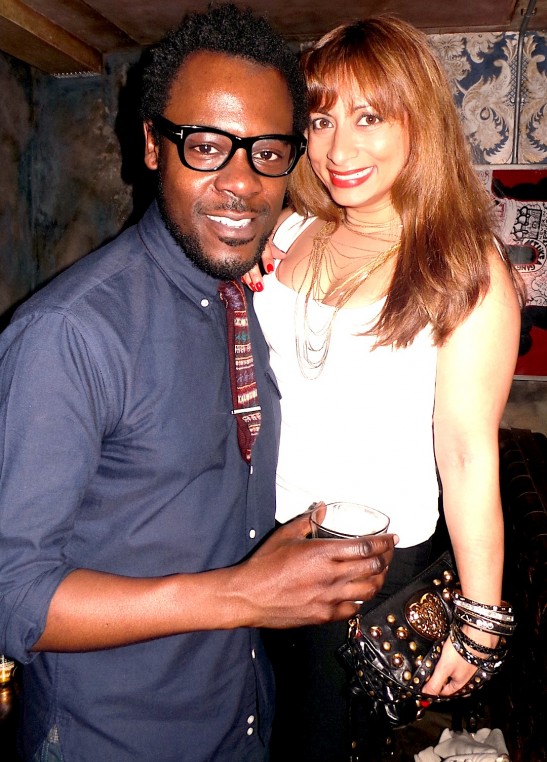 JASMINE WITH TRAILER HAPPINESS (PORTOBELLO RD) OWNER SLY.
Adidas head honcho Paola Lucktung was looking fly in her black and silver sexy off the shoulder sheath dress. She was dancing up a storm with her mate fashion stylist Natasha Chang-Lewis.
Warner music’s one woman branding bombshell Taponeswa Mavunga was in the house as was the once in a lifetime personality of sly who runs the Trailer Happiness bar in Portobello road. A great raucous time was had by all.
A night well worth checking out again- shout out to the main man that runs the night-Clement!

SATURDAY AFTERNOON GIRLS POWER LUNCH- JESSICA HUIE, (BABY J), JODIE DALMEDA, NADIA EL KHOLTI, JASMINE AND ROZAN AT THE RUM SHOP.
Then came a Saturday afternoons ladies power lunch with PR Maven Rozan Ahmed, British PR maven Jodie Dalmeda (Sony Music/ Virgin Unite etc), Colour Blind Cards founder and CEO Jessica Huie and her baby, and Nadia El Kholti (Sony etc). We all met at the Rum Shop just off Portobello Rd and took over half the venue with food, noise, baby escapades and laughter! We debated so much and so loudly that we had to have a rule in place which involved us holding a white table napkin in order to speak and make ourselves heard!

The same evening it was time to pop on my ‘’ all black everything’’ themed outfit with me attending Jermaine Scott aka Wretch32’s birthday party on the weekend.
His invite said ‘’ Please note all mentions / advertisement of this event is strictly prohibited on any social networks or public forums.’’ You gotta love an invite that says that right? (More on that next week!)
Then on Sunday of course it was all about mummy- every year that passes and they’re still with us is not ever to be taken for granted!

On Monday after a day at work and an exhausting circuit gym session I attended a sold out Tabernacle in Westbourne Grove where we saw the great and the good of the music world gather to see one of the last intimate shows that future superstar Laura Mvula will perform. Key influencers like Mervyn Lyn and Mastercards Shaun Springer were in the house. Laura’s voice was stronger live with a full band than on record and she really blew the crowd away. Big things for her coming!

Next I had lunch with an old friend. Back when we were all raving at Subterania and Hanover Grand nightclubs, a young man named Lonyo Engele was a DJ, MC (known back then as Comme Ci Comme Ca ), and artist that sang a catchy summer hit called ‘’Summer of love’’ (got to no.8 in the UK charts). Last year he cut his teeth in the acting world playing the lead in a film titled ‘’David is dying’’ for which he won numerous acting accolades and awards. This year he’s stepped up a level by being cast in a screen adaptation of the bible aptly titled The Bible, which is getting rave reviews and humongous ratings in the states. (More on that next week too!)

Onwards to another acting world talent when I went to see film director Mo Ali, who invited me down to his film set to watch the filming of his latest movie ‘’Montana’’…yep more on that next week too-not enough room on one page.
The next evening I enjoyed a catch up with my fellow Ladies Talk TV cast (Angie Le Mar, Jackie Michaels, Jacquie Joseph and Bonnie Greer) in Soho. Currently the shows in between series but we’ll be back in a few weeks-look out for the bigger, new and improved series!
I love staying busy! My tip for life is acquire great friendships, nurture them, make them a part of your extending business network for brainstorming and have as much social fun as possible with them. The harder you work on your friendships, the better your business goes. Sounds strange but believe me it’s the truth!